If Superman was the most, and Superman II the next-most, then Superman IV is the least. Cheap, shoddy, with wide open seams and cringe-worthy performances from almost all involved, Superman IV’s status as the most reviled modern Superman film remains intact. The lustre of the character appeared to have worn thin with the studio by now, with the original three films’ producers, the Salkinds, selling off the franchise to Canon Films, who obviously thought their meal ticket had arrived. Spending what appears to be school lunch money to achieve what one might loosely term “visual effects”, and dabbling in title star Christopher Reeve’s very honest nuclear arms race narrative (Reeve receives a co-story credit), the film is an honest-to-goodness shocker, nigh irredeemable as not only a Superman film, but a film generally. 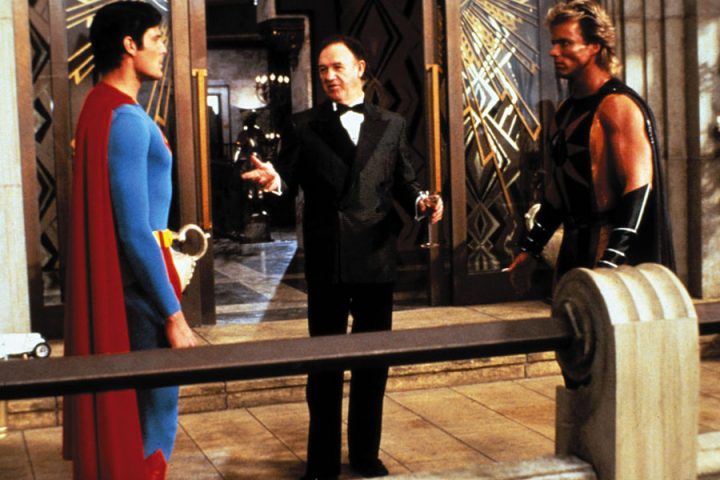 Clark Kent (Christopher Reeve) is shocked to learn that the Daily Planet, the once great metropolitan newspaper, has been bought by tabloid tycoon David Warfield (Sam Wanamaker), who has decided to let his daughter Lacy (Mariel Hemmingway) transform business as its new chief editor. Meanwhile, Lex Luthor (Gene Hackman) escapes from his labour camp with the aide of his inane nephew Lenny (Two And A Half Men’s Jon Cryer), and steals a strand of Superman’s hair in order to create a new nemesis for the man of steel, in the form of uber-powerful Nuclear Man (Mark Pillow). Superman, who inadvertently “creates” Nuclear Man when he throws the entirety of Earth’s nuclear weapons into the sun, becomes sick with radiation, leading many to think that perhaps this time Lex Luthor has finally won.

If you’re ever wondering what the key crucial difference is between Superman’s 1978 big-screen debut, and this late 80’s debacle, it’s heart. Reeve aside, almost nobody in Superman IV looks like they’re interested in the film, including Gene Hackman’s hokey-jokey Luthor, Jon Cryer’s awful “comic sidekick” role, Margot Kidder’s matured Lois, and Mariel Hemmingway’s preposterous Lacy Warfield. Whereas the original film touched on resonant emotional beats in Superman lore, The Quest For Peace (by god, the hubris) seems to join-the-dots steal from its predecessors to achieve similar results – only without achieving them. Clark reveals that he’s Superman to Lois within the first act, they take a romantic flight together across…. well, New Jersey, I think… while yet another Super-kiss ruins poor Lois’s memory – this film is hyperbolic in trying to achieve both the heart of Richard Donner’s first film and the action-packed nature of the 80’s visual dynamism.

It’s a discordant effort all-round: the film plays for the roof, certainly, what with it’s nuclear undercurrent still feeling like the summit of a Superman-specific fantasy, but the clunky nature of the plot, the jarring visual effects (so far beneath what Donner achieved a decade earlier) and often rancid performances do much to avert the film’s potential success. Hackman at the very least appears to be having fun, even though he’s simply reciting franchise catchphrases and echoing his previous performances in cartoonish silliness. Reeve’s earnestness in playing Superman’s desperate desire to prevent humanity from destroying itself is sincere, but the character feels utterly charmless in his own film, and Superman here feels like he’s become a Hollywood propaganda tool rather than a charismatic cinematic creation. And Nuclear Man; well, Mark Pillow’s oft derided performance as one of the franchise’s most polarising creations isn’t all that bad, he’s just undercooked (ha!) by bad writing, and terrible direction. Oh, and shitty fingernails.

There’s an utter lack of cohesion here. Characters change personality mid-film, and sometimes mid-scene, with Cryer’s Lenny the most egregious example, who changes from a random punk to some weird surfer-dude-speaking douchebag two scenes later. Mariel Hemmingway’s go-gett’em Lacy goes weak at the knees when she claps eyes on Clark, and it’s so obvious, you can smell the misogyny. Lois Lane appears to have had a feminist neutering, spending most of the film sappy over Superman rather than being the ass-kicking heroine she was in the first film, wasting Kidder’s natural chemistry with Reeve on a pointless sub-arc that never goes anywhere. Nuclear Man goes rogue against Luthor early in the film, before becoming his creator’s lapdog within the blink of a Superman fart. A heroic attempt to do a “Clark and Superman together at once” sequence – a double-date, if you will – is cringeworthy, although not for Reeve’s honest performance, but rather director Sidney J Furie’s utter inability to wring either tension or humour from it. Humour, and heart. The film feels disingenuous, a product of capitalism run amok rather than genuine creative prowess.

It would be easy to write off Superman IV as a mistakenly haphazard production were it not for the obvious deficiencies in the film’s visual effects. Compared to the both the original and Superman II, The Quest For Peace is like a cheap sitcom knock-off, with terrible green-screen and matte-work, awful practical gags and even “animated” Superman effects that scream of financial extirpation. It’s as if the studio wanted the prestige without the cost, and that was never going to work. Superman deserved better than this, and you can see why. You can’t make a cheap Superman movie, not if you want it to succeed (although even the costly ones have met with problematic critical appraisal). The Quest For Peace essentially ruined the Superman franchise for decades – the character did make a return stint in 1993’s Dean Cain-led Lois And Clark series – and that’s understandable. No doubt lacklustre box-office receipts for Superman IV had nothing whatsoever to do with the awful production value, cheap-ass effects and gargantuanly awful writing, editing, acting…. hell, everything. If it was a cartoon, it’d be hilarious. It’s not a cartoon, though. And that’s the sad part.