I’ve gone my entire life without knowing Brewster’s Millions, a charming mid-80’s comedy starring Richard Pryor, is actually one of 10 films to be based on a turn-of-the-20th-century novel by George Barr McCutcheon. I grew up watching, rewatching, and re-rewatching this film taped off the television onto VHS, but only recently did I track down a copy on BluRay and man, did it bring back some memories. Produced by Joel Silver, the guy behind the Matrix trilogy, Brewster’s Millions is quite possibly the ultimate American Dream fantasy fulfilment, as Pryor’s Monty Brewster stands to inherit an inordinate amount of money so long as he spends thirty million within a month. As a kid, I think I attached mostly to the fact that somebody could possibly have so much money (caveat: sure, it doesn’t seem like a lot, but in the 80’s this would have been extraordinary) as we were a relatively low-income farming family without a huge disposable income, so that imaginative methods behind Bewster’s spending were like financial kid-in-a-candy-store to my young mind. I’m always wary of reacquainting myself with childhood film favourites, mainly because with very few exceptions those films haven’t aged well at all, and I had always imagined that this film would age even less gracefully than that.

Monty Brewster (Pryor) and his best friend Spike Nolan (John Candy) play minor league baseball in a New Jersey boondock. After being arrested in a bar-room brawl, Brewster is shocked to learn he’s actually the last living heir to the fortune of one Rupert Horn (Hume Cronyn), but in order to inherit the man’s money he has to follow a set of strict rule: he must spend $30m within 30 days, but not have anything to show for it other than receipts, in order to gain a larger sum of money. Brewster is accompanied by the law firm’s attractive accountant, Angela Drake (Lonette McKee), while her boyfriend, up-and-coming law-firm partner Warren Cox (Stephen Collins) works as an insider for the firm using his interior decorating skills as cover.

Brewster’s Millions is exactly the kind of film middle-class America would go nuts for. It’s about money – lots of money – and in the middle of the boom financial times of the period Brewster’s Millions would have seemed like manna from heaven. Although it might seem antiquated today, and the sums of money being discussed paltry by the inflated value of currency across the globe, Brewster’s Millions is almost a cautionary tale about having everything you could ever wish for. The conflict of the film is simply that Brewster isn’t allowed to tell anyone why he has to spend so much money, so naturally his friends continually try to advise him not to be seen as frivolous with his newfound wealth. It’s an interesting premise, and no doubt anybody watching would have a laundry list of their own running in the back of their mind of how they’d spend all that money (remember, you can’t have any assets and you can’t just give it away to charity), and the script by Tim Harris and Herschel Weingrod skews heavily to comedy, there’s an undercurrent of joy and… effervescence to the film that lifts it high. 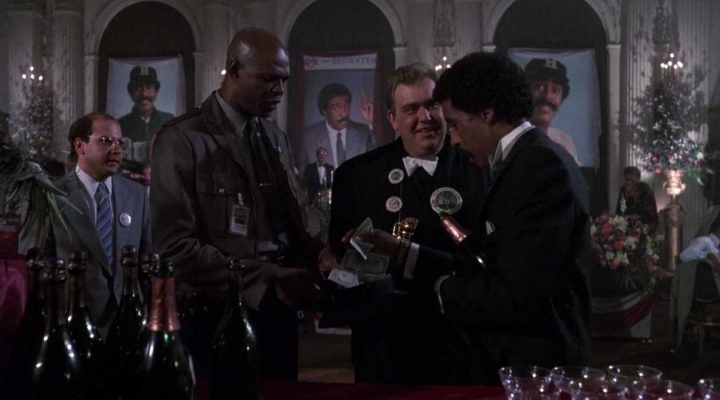 It’s also surprising to learn that the film is directed by Walter Hill, perhaps the last man you’d expect helming a knockabout comedy like this, given his oeuvre is ostensibly action and thrillers. Hill doesn’t mince frivolity, giving Brewster’s Millions a straight-arrow sensibility that contrasts beautifully against Pryor’s comedic skills. And for all the times I ever saw this, I’d forgotten just how much Pryor talks out of the side of his mouth. Although the character is down-on-his-luck and basically a blue-collar type trying to live the dream, the reality of that dream becomes a nightmare when the constant attempts to spend money cause friction between him and his friends. Wisely, Hill’s film eschews the book’s year-long timeframe, giving our hero a single month to accomplish his goal, which generates a sense of urgency to the overall plot. It’s this urgency that suits Pryor’s manic energy, his madcap performance accentuated by traditional 80’s dubbing and herd-crowd mentality, not to mention a lively, upbeat score by Ry Cooder (a regular Hill associate).

Pryor’s cohorts in this venture, particularly John Candy as his buddy Spike, and Lonette McKee as the upright and moral compass Miss Drake, find a nice balance between farcical comedic tropes and legitimately emotional subarcs. Stephen Collins’ ladder-climbing Warren Cox, who treads a fine line between mincing stooge and hapless lackey, is well played, and seeing Patt Hingle bob up as Rupert Horn’s power of attorney is delightful. There’s a twinkle in his eye that just soothes the soul. Hume Cronyn’s extended cameo as Horn himself is hilarious, the kind of funny that makes you pee your pants laughing.  Oh, and look quickly for Insidious franchise player Lin Shaye as a reporter who asks Brewster pertinent questions when he decides to “not” run for Mayor of the city, while Rick Moranis pops in briefly as a mimic – which is as painful and nonsensical as it sounds.

While you’d hardly class the film as uproariously funny, Brewster’s Millions is just plain ol’ good fun viewing. It’s incredibly inoffensive, largely family-friendly (aside from a few cuss words here and there) and seems to revel in its own sense of fun and fantasy, and for that you couldn’t ask for more. It’s a perfectly charming film, content to work within its premise and doing exactly what’s required. Taken in context with its 80’s New York City backdrop and the cutsey-pootie dramatic plotting, Brewster’s Millions is a film that has aged superbly well, and if nothing else, makes me lament the loss we’ve had in both Pryor and Candy going well before their time.