For an all-to-brief period in Hollywood’s history, not long after The Jazz Singer marked the debut of “talkies” in the medium, cinema lurched forward with the burgeoning technology and left many industry stars behind; those who embraced the talking picture found continued fame and fortune, whilst those who didn’t… struggled. Charlie Chaplin, the silent era’s biggest name and most profitable star, struggled with the advent of sound film to the point he even went on an 18-month holiday to think about things. City Lights was the first film he directed following the introduction of sound films, and his consternation arose from the fact that he wanted his eponymous Tramp character to remain voiceless. The idea that the Tramp’s voice would delineate him for a generation of fans was something Chaplin wanted to avoid, and concerned he’d be considered improvident for not embracing the newfangled technology, the filmmaker persisted with silent films until he unleashed his most poignant – The Great Dictator – to thunderous acclaim in the years to follow. Therefore, City Lights is one of those rare films to have been produced in the nascent sound era to remain a silent, albeit with sound cues provided by musical instruments.

The Tramp (Chaplin) meets a blind flower seller, (Virginia Cherrill), and decides to help her regain her eyesight with the aid of a wealthy drunkard (Harry Myers). That’s it. That’s the film in a nutshell. Everything stems purely from this single descriptive sentence, and describing anything else is to spoiler the film completely.

Every great comedian needs a straight man. Somebody to bounce the comedy off, and this has never been more prescient than when you need to perform slapstick or farce. Now, in City Lights, we have the perfect comedic performance of Harry Myers, as a drunken, suicidal businessman with plenty of cash, who slink and staggers his way through a spot-on farcical characterisation that is as witty and on-point as it is outshone by his co-star, the inimitable Charlie Chaplin. Nobody, but nobody, outshines Chaplin in his own film, and Myers, for all his physical extrovert behaviour, is legitimately the wonkiest straight man in silent film. To be honest, where City Lights kinda becomes to saccharine in its romantic elements, it blasts out some genuine guffaws whenever Chaplin and Myers appear on-screen together.

Oh, Chaplin’s a blast even on his own, but City Lights is something special. Chaplin’s Tramp is at his whimsical best, with the star milking every laugh out of every scene he can; from the opening “sleeping on the statues” sequence, to Chaplin and Myers’ drunken restaurant blitzkrieg, as well as Chaplin’s whistling-hiccups, and one of the funniest boxing sequences I’ve ever seen, the whole film is hilarity personified. Chaplin mixes his typical brand of pathos, farcical physical gags and slapstick together with a sense of uplifting life-is-beautiful optimism through which he focuses the story’s imperfect romantic narrative. I say imperfect because unlike other Chaplin films – Modern Times and The Great Dictator, for two – the love interest and the star don’t have great chemistry together. Okay, demanding a comedic force like Chaplin and the rather restrained filmic wallflower in Virginia Cherrill, who plays “blind” rather well, be sizzling hot together is asking a bit much, and truth be told I think the romance elements work to service the comedy, rather than the other way around. 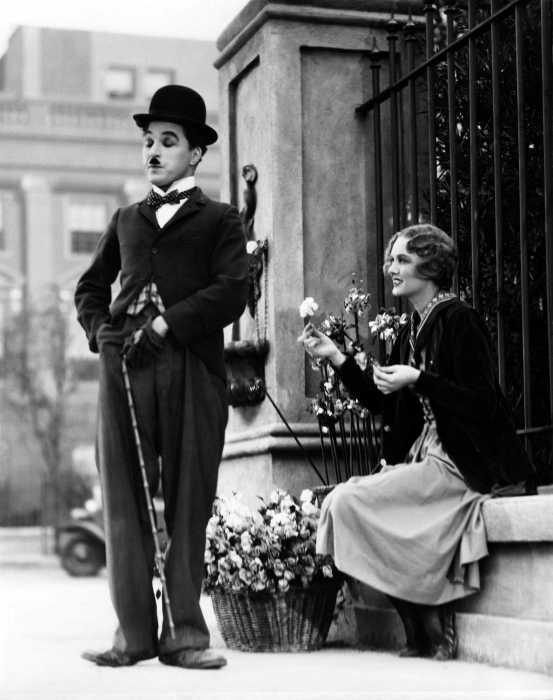 As with most Chaplin films, especially his early ones, City Lights feels more like a series of vignettes rather than a singular narrative, although the narrative is most definitely there. Unlike many contemporaries, Chaplin’s film eschews plentiful “dialogue” titles and instead asks the audience to figure out what’s going on through broad acting styles than through descriptive text. The characters by default are simplistic and easy to follow, stereotypes demanding little investment other than to play second-fiddle to the Tramp’s manic, skittish eccentricities. Cherrill’s Blind Woman, who comes and goes throughout the film as simply the object of the Tramp’s affections, is attractive but ill-suited to this kind of film, offering virtually nothing by way of development in the role. Myers has a blast, no doubt, but as usual it’s Chaplin who holds things together.

As a technical exercise, City Lights is brilliantly executed by Chaplin and his production team. Camerawork is inventive and fluid, the sets look expensive and the music, written by Chaplin himself, suits the film completely. Many silent films I’ve seen simply have generic classical or period music over the top that never meets the emotional content of the scene playing at the time, and to hear Chaplin composed this score himself (with one lawsuited exception) is impressive indeed. The cinematography is credited to three people – Rollie Totheroh, Gordon Pollock and Mark Marklatt – and while I can’t find any definitive information on exactly why a single film required three lensers, I suspect it has more to do with the length of time it took to make the film. With filming commencing just after Christmas Day, 1928, and finding itself edited right through to December of 1930, and released in January 1931, City Lights never once shows weaknesses in what must have been an all-consuming project for Chaplin. Film notes suggest the productions length was due to Chaplin’s increasing perfectionism, but it might not be drawing too long a bow to suggest the director wanted to make the film as good as possible to withstand the barbs and arrows for making a silent film in the age of sound. The crisp dexterity of Chaplin’s film highlights a proficiency in camerawork, editing and, most of all, focus as a storytelling tool, with lighting and a sense of mood pervading the film’s relatively liteweight story.

City Lights is one of the great silent films, make no mistake. It’s a sketch comedy in feature length form, another terrific platform for Chaplin’s unique brand of comedic genius – and he was a genius – and although not as powerful as, say The Great Dictator, there’s a pure cinema at work here that will bring a grin to the face of even the most jaded film fan. Frantically acted, deftly witty and hung on the merest of plot contrivances, City Lights will not stretch the intellect but it’ll sure give the funny bone a swift kick from time to time.