Rousing, energetic entry into the ongoing Marvel Cinematic Universe, Doctor Strange tackles a hitherto unseen aspect to the popular studio’s run of hugely successful films in that finally, magic is introduced into the franchise. Whereas previously we’ve enjoyed the Earthbound antics of the world’s mightiest marvels, the Avengers, and the cosmic hijinks of the Guardians, now we rip open the multiverse (which was a concept I figured trademarked by DC) to unveil the magical realms of Doctor Strange, a surgeon injured by accident and suddenly thrust into an alternate-plane-of-existence battle for the planet. Proving that Marvel can lure anybody into their clutches, Sherlock actor Benedict Cumberbatch arrives to play the Sorcerer Supreme with American accent in tow and a glint of humour in his eyes, as he waves his arms about nonsensically to summon portals, supernatural weapons and what can only be Christopher Nolan’s idea of Inception’s sequel as the screen bends to the whim of no gravity whatsoever. 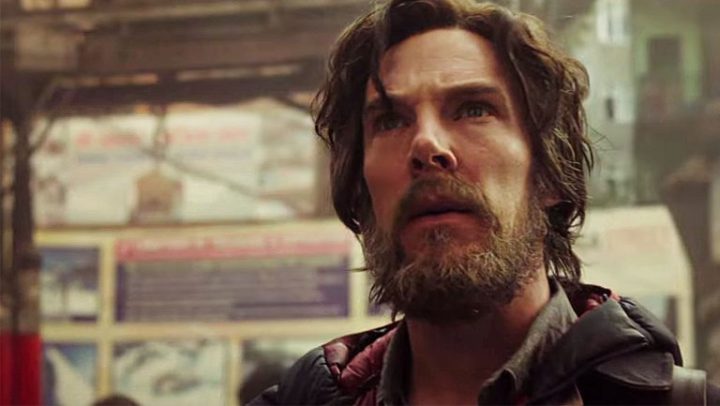 Stephen Strange (Cumberbatch) is an arrogant, narccisistic neurosurgeon working at a New York hospital, alongside colleague (and one-time lover?) Christine Palmer (Rachel McAdams), before his life is upended by a high speed car accident. This leaves his hands, the tools of his trade, badly damaged, and with his career at a crossroads Strange sets out seeking any and all chances to salvage his career. Ending up in Nepal, Strange encounters Mordo (Chiwetel Ejiofor), a student of a mystical being known only as The Ancient One (Tilda Swinton), who offers to teach Strange about the astral plane and other dimensions in order to find his salvation. Strange accepts, but soon learns that while the fight with former student Kaecillus (Mads Mikkelsen) rages unabated and that the demonic god-like ruler of the Dark Dimension, Dormammu, threatens human extinction, the Ancient One herself has a secret that could very well tip the scales against them all.

Dear goodness, the dailies for this film must have been an absolute riot: without the stupendous visual effects to provide the magical entertainment, Doctor Strange would have featured a hell of a lot of arm waving and weird finger manipulation. Ahem.

There’s something fun about Doctor Strange, and I wasn’t prepared for it. Despite dealing with the supernatural and featuring an actor better known for his serious roles in Sherlock, The Imitation Game, Star Trek Into Darkness and The Fifth Estate, Doctor Strange provides plentiful laughs amid the angst as its hero undergoes his personal transformation from doctoral douchebag to resident magical maestro. While Strange’s journey into the mystical arts isn’t especially nuanced, nor particularly inventive, director Scott Derrickson’s grab-bag of visual effects trick will make you gape in the wonder of the physics-defying antics of Strange, Mordo and Kaecillus’ pursuit through the labyrinthine mind-trip of New York City twisted into a moebius strip that makes Inception’s Paris-flip look like an episode of South Park. 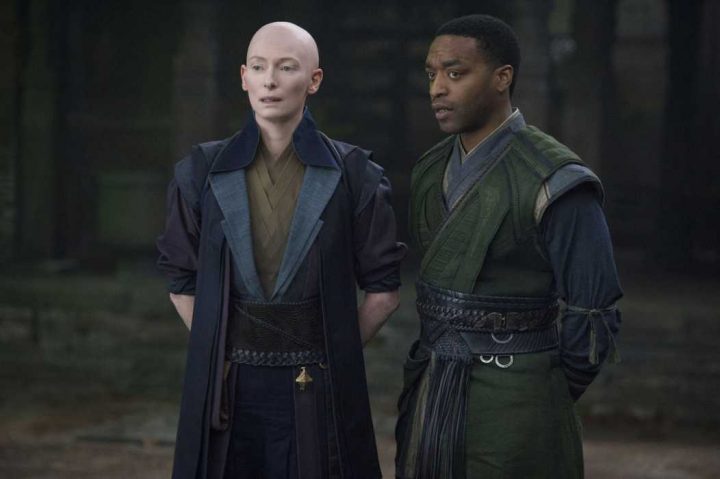 The film’s story comes from the director, as well as cohorts Jon Spaights and C Robert Cargill, the latter better known as Massawyrm from once-cool internet film site ain’titcoolnews.com. In giving Strange an origin story, the writers also had to introduce an entirely separate plane of existence to MCU audiences, which was a tough ask given the franchise had spend several films simply getting the Avengers into gear. Unfortunately, Doctor Strange doesn’t succeed entirely in this enterprise: by shoehorning in so much exposition and jabber-speak to bring audiences up to speed with Strange’s mystical universe, much is lost in the emotional heft of the narrative. Strange’s arc, from douchebag doctor to solid, self-assured waver of hands and magic, sputters out in the final act after a fairly strong, crisp opening, while his relationship with McAdams’ Palmer never feels borne of genuine affection. So to, the Strange/Mordo relationship feels clumsy, with the latter never feeling like a solidly understandable character despite Ejiofor’s convincing, impassioned performance. Tilda Swinton, of course, does as Tilda Swinton does, commanding every frame of the film in which she appears, easily outshining a wasted Mads Mikkelson as the film’s crucial Bad Guy, Kaecillus.

Whereas previous Marvel films balanced story and character demands with origin mythology almost as if it was easy, Doctor Strange somehow feels rushed to get to the good stuff. Strange’s trek to Nepal takes place within a single title card, his meeting with the Ancient One almost occurs by manifest destiny, and the coupling of coincidence kinda feels hackneyed rather than naturalistic. But it’s a Marvel film, so contrivance is outweighed by the jaw-dropping visual effects which dominate the plentiful action sequences, some of which simply defy description and must be seen to be believed. The film’s deux ex machina, the ultimate Big Bad in the form of cosmic demon Dormammu – who makes MCU bad guy Thanos seem about as dangerous as a teenager’s titty – is omniscient yet defeated almost too easily, a cast-off Doctor Who enemy who never gets his due (are they saving it up for a sequel?) and it’s this that makes the film something of a missed opportunity. 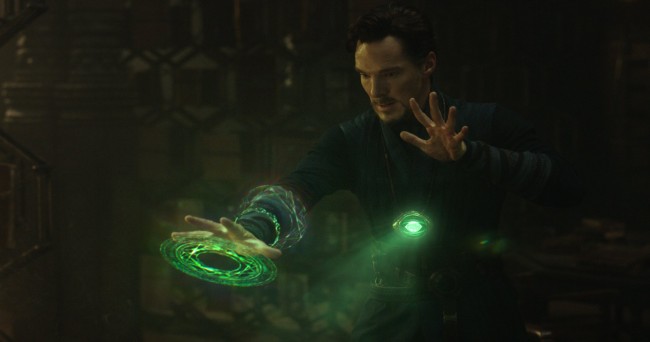 Despite my misgivings with the story’s weaknesses, Doctor Strange is solid popcorn entertainment from a studio that can seemingly make shit polish up like an adamantium skeleton. Derrickson (Sinister, The Day The Earth Stood Still) takes no prisoners with his storytelling style, offering shocks, twists and turns within the dynamite action sequences populating the narrative. The visual effects are indeed excellent, easily outdoing any previous Marvel film for scope and complexity (it’s the kind of film that’ll make a home HD presentation one to slo-mo savour) and to his credit Cumberbatch never feels like he’s struggling within it. Often, actors kinda get lost in the mix of these big-budget tentpole effects films, but not ol’ Cumberbumble. Although several of his jokes kinda thud to the floor, Strange’s wry humour and flippant, off-handed acceptance of the lunacy before him feel very British, so it makes sense that a Brit such as Cumberbingle gets the job. There’s a sense of fun behind the simplicity in the story, rickety as that is, and the film’s saving grace is its utterly stunning visual vernacular, most of which take place outside of our own plane of existence and of which we’re all utterly unaware.

Doctor Strange does what every Marvel film before it has done: it personifies a comic book hero, instils him with a sense of belonging to a larger world (and us, by defacto), and resolutely plays for the Infinity War endgame we’re all building for. Similarly to the inexplicably risk-averse Civil War, Doctor Strange never really goes for the emotional jugular, playing things far too safe despite the stakes involved for our world. This isn’t to say the film doesn’t succeed superbly, because as a piece of spectacle entertainment it’s right up there among the best of 2016, but for those hoping Marvel might actually take a chance with one of its preeminent characters, to deliver a film that actually changes the franchise in some manner, you’ll come away disappointed. Still, popcorn-munchers unite, because at long last, the Doctor is in. And he’s ready to operate.

NB: naturally, Marvel has snuck some mid-credit and post-credit footage into the film, so don’t leave once the credits start to roll! One of them is particularly funny! 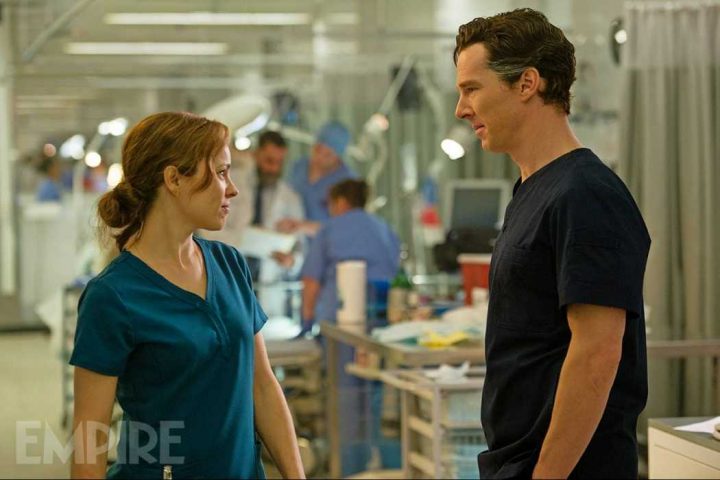