Ten years ago, Money Monster wouldn’t have worked nearly so well as it does today. Riding the shoulders of the Global Financial Crisis, Money Monster’s financial thriller plot is torn right from the same headlines we read in The Big Short. Instead of being darkly comic, though, Money Monster takes the fingernail-biting terror of a lone-wolf terrorist attack on a television studio and amps it up with George Clooney and Julia Roberts – two hugely capable stars – bolstered by Jodie Foster’s compelling direction, and delivers a rousing fist-pump for the common schlub and aims its bile at the suit-wearing financial cronies who drove many people to the brink and happily pushed them over. 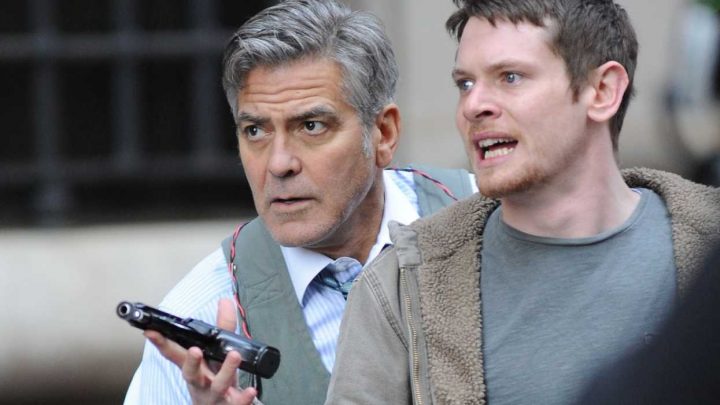 George Clooney plays Lee Gates, host of New York financial advice television show Money Monster. While shortly after commencing the show’s weekly broadcast, a young man, Kyle Budwell (Jack O’Connell) appears on set armed with a gun and an explosive vest, taking Gates, as well as the television studio, hostage. Money Monster’s long-time director Patty Fenn (Julia Roberts) guides sudden terrified Lee through the ordeal via an earpiece, whilst outside police and SWAT begin to plan an extraction and resolution. Kyle’s vendetta against US conglomerate IBIS, run by Walt Camby (Dominic West) stems from losing a significant inheritance in a share plunge, something Lee bet against on his show, suckering possibly thousands into a deal that went south. As Patty and her show’s team attempt to trace the money lost by IBIS, forces work in the background to prevent the truth from coming out. Meanwhile, Lee and Kyle become unlikely allies in a desperate race for survival.

The success of this film is derived from two things (in my opinion). First, perhaps foremost, is the hatred the common man has with those who make their fortunes buying and selling stock across the backs of honest, hard-working folks like you or I. The gap between the haves and have-not’s widens each year it seems, and with it comes a natural rage against a system perceived as rigged, corrupt, and unjust. Money Monster taps into that rage by offering a man at the end of his tether who seeks some form of retribution against this system; he finds the man he inculpates in his predicament, poor Lee Gates. It’s a “howling at the wind” motif that, while always doomed to be a Pyrrhic victory if it is anything at all, gives some measure of fantasy to viewers watching who might feel similarly aggrieved.

The second aspect of the film working to succeed is the direction of Jodie Foster and the performances not so much of Clooney, but rather Julia Roberts, as Patty Fenn. Roberts’ work here is resolute, firm, rounded and compelling, even though she spends  most of the film barking directorial-instructions into her headset while Budwell’s gun and bomb threaten everyone in the studio. Even though Roberts and Clooney spend only a brief moment together on-screen in the same shot, their rapport through the film’s communicative elements shines through to cover some of the film’s weaker elements, particularly noticeable in the wobbly third act. Clooney’s Gates seems somewhat out of character for the actor, a raggedy businessman located somewhere between his roles in Up In The Air and Danny Ocean in terms of personal iciness and slick-handed surety. Of course, faced with the prospect of being shot or blown to pieces, Gates’ reactions feel on point, and Clooney sells the delivery with his well honed panache and screen presence. You get the sense that Clooney’s basically playing a heightened version of himself to a point; while his character doesn’t really feel lived-in to the degree a lesser star might have accomplished, Clooney’s manner and sheer suave cinematic sophistication allows viewers to get into his head relatively quickly. Lee Gates might be a douche, but he’s far from the worst. 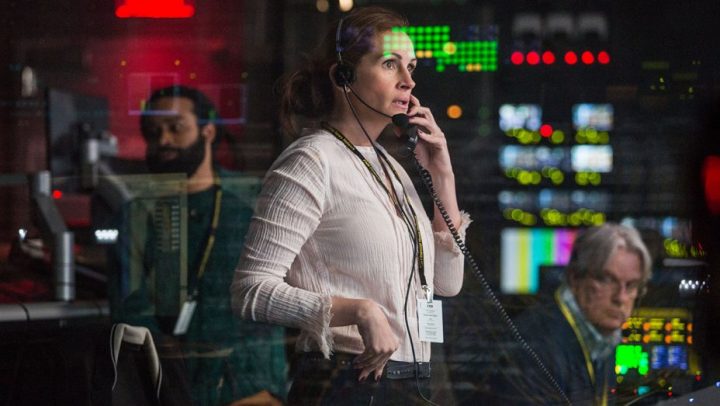 Jodie Foster – you may remember her from small films like Taxi Driver, Contact, The Brave One and even Spike Lee’s hostage-misdirection thriller Inside Man – crafts a film of both compelling tension and dramatic weight, certainly eking out more than the plot ostensibly offers at first blush. I never got to see her other directorial effort, The Beaver (starring a then-disgraced Mel Gibson), but from what I read it sounded like Foster had the tenacity and visual acuity to direct a film driven by character moreso than action or visual effects. Money Monster is quite possibly the perfect fit for her wheelhouse, showcasing interesting performances and offering a glimpse, a mere peek, behind the financial curtains even if it’s all fictional. Money Monster touches on elements of truth, though, which is where a lot of its inherent anger and frustration is derived.

Had Money Monster somehow finished twenty minutes before it actually does, the film would have been brilliant. Instead, Foster closes the film with what amounts to a crowd-pleasing euphoric-and-melancholic moment of comeuppance. This in itself ain’t the problem so much as the film doesn’t quite earn its denouement the way it might have liked. Clooney and O’Connell’s walk through the still-crowded streets of New York City’s financial district – it’s here the film kinda lost me, after all the police were basically letting a terrorist with a suicide vest walk through confined narrow streets lined with hundreds of innocent people? Come on, not even that’s plausible as “movie fiction” – to where they deliver the narrative end-point of the whole financial debacle, and while it feels punchy and cool at the time, as an afterthought it doesn’t really make a lick of sense or even feel believable. Contrivance undermines the final act of Money Monster. It’s this underwhelming sense of incomplete closure that is deleterious to the film’s overall sense of anger. The point Foster was trying to make seems hidden behind the salaciousness of the act of violence involved, rather than driven by it.

While it might close with more a whimper than a sense of just-deserts being delivered, Money Monster’s intriguing plot hook and measured performances from the low-key cast are enough to sway interest in the movie. Foster’s direction is assured, strong in emotive visual cues and keen at preserving the tricks it has up its sleeve until you need the reveal. Money Monster isn’t the headline grabbing film The Big Short, Inside Job or even Wall Street managed to be, but in its own quiet way it remains an effective, often razor-wire taut thriller.