Any sequel to Independence Day was always going to be problematic; moreso with the distance of time. The original film, a film that re-legitimised the term “crowd-pleaser” for the 90’s, has grown a cult status for its cheesy B-grade tone and home-run effects – a mixture of CG and practical model-work – and remains an enduring classic that overcomes the problems inherent in its story. Any sequel, particularly one which exists in an era of entire films constructed inside a computer, armies and armadas depicted every other week on the big-screen, and knock-’em-dead CG, was always pushing its pulp movie aesthetic up a very steep hill: in losing key members of its original cast, or recasting actors in known roles, Resurgence’s tapping into our collective feeling of nostalgia ran a fine line between homage and retread, and, I’m afraid, too often tips into retread to be much beyond a hype-train failure. Not for lack of trying, mind you. Sadly, the era of Independence Day’s cavalier bravado and muscular patriotism now resides at a time of cynicism and division – something no amount of flag-waving sci-fi fantasy can overcome. 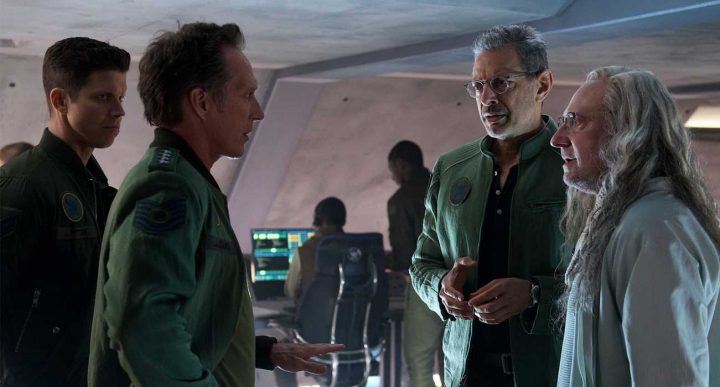 20 years after the events of Independence Day, Earth is now recovering and has installed advanced warning bases and defences on several celestial bodies – the moon, Mars, and one Saturn’s moons. However, just as the planet is about to celebrate the 20th anniversary of the aliens’ defeat, a new threat emerges – a larger, more destructive alien craft has breached the outer defences and makes landfall, using its gravity to destroy even more Earthly infrastructure. Director of the ESD (Earth Space Defence), David Levinson (Jeff Golblum, Goldblumming his way through this whole thing with aplomb), together with recently catatonic but now revived Dr Okun (Star Trek: The Next Generation’s Brent Spiner), discover that the new ship contains an alien Queen, intent on mining the Earth’s molten core to power their vessels and subjugate countless more interstellar civilisations. Former US President Whitmore (Bill Pullman), his daughter Patricia (Maika Monroe), her boyfriend Jake (Hemsworth The Lesser) and his former pilot buddy Dylan Hillier (Jessie Usher, doing his best to personify the son of the much missed Will Smith) band together to concoct a plan that, if successful, will not only bring about the end of the aliens but save billions of lives across the galaxy.

As much as I can sit here and say I did enjoy Resurgence, to call it a quality film of significance or artistic merit would be highly disingenuous. Patently ridiculous, riding roughshod over the memory of the original film’s utter magnificence as a tentpole destruction-fest for the ages, and finding situational, physical and logical contrivance at almost every turn, Resurgence lacks the charm of the first film’s devilish wit and hubris and mistakenly replaces with with the slick, shiny veneer of snark, destitute characters and – most bizarrely of all – a reliance on us turning up for a third film. Yes, Resurgence places itself as a soft reboot of the franchise as it sets its sights on outer space by the close (spoilers, duh), and while this comes as something of a surprise, when all’s said and done maybe we should have expected it. 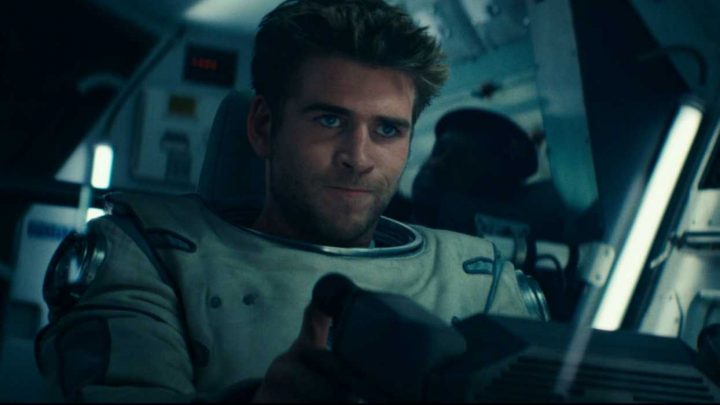 Resurgence is entirely about scale; the bigger, the better. As with the first film, alien destruction is the order of the film’s opening act. The monstrous alien Queen Ship, which dwarfs the attack craft from the first film by several orders of continental magnitude, is genuinely a sight to behold: it takes up almost an entire hemisphere of Earth’s fascia, straddling Europe and America like a gigantic upturned clamshell as it generates its own destructive gravitational field that sets ruin upon recently rebuild landmarks like London’s Tower Bridge, Singapore, and Paris, to speak nothing of Washington DC being laid waste. With humans using the aliens own pilfered tech against them, the fight tends to be more even, although the sheer bulk of the invading force this time around is overwhelming.

The second act, in which our smattering of heroes both old and new attempt to “take out” the Alien Queen’s ship in a manner similar to the successful mission in film 1, obviously comes with abject failure, although not without gently assimilating us with further knowledge of the invading species (which, one suspects, will come in handy in a proposed third film). This leaves the third act to pull the proverbial rabbit out of a hat, the last-gasp rescue/save for which the first film was noted. Sacrifices are made, lives are lost, and a fair amount of heart is placed into the film’s emotional heft, but the majority is derived from the returning cast rather than the new ones, a lack of development for them resounding badly with me. Sure, Goldblum does his stammering best, Bill Pullman puts on his square-jawed Presidential hat once again (he tries to deliver a similarly epic speech this time, but it lands with the grace and execution of a wet turd, and seems designed purely to make us think back to the original; nope, doesn’t work), and Judd Hirsch’s many escapes from certain doom (while Vivica A Fox obviously took the paycheck and ran) become more a series of eye-roll gags than anything requiring actual tension. 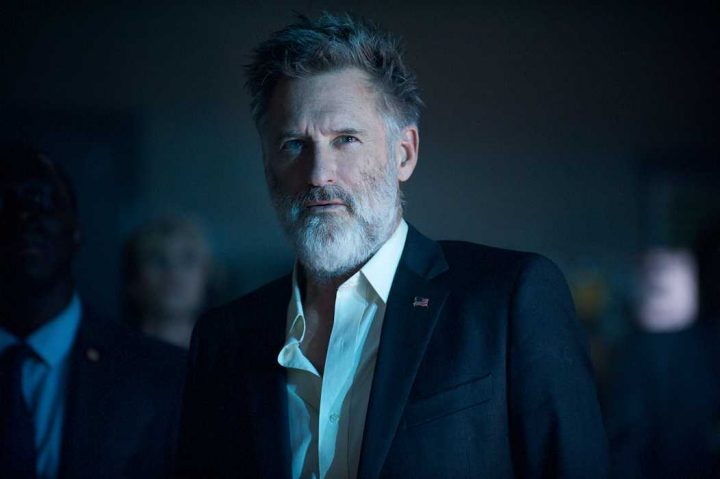 Throw in Brent Spiner’s larger role here, an African warlord’s son (DeObia Oparei) known for his skill hunting the aliens, the always impressive William Fichtner as a stout army commander (basically the same role he played in Michael Bay’s Armageddon), and Levinson’s new squeeze, French psychiatrist Dr Catherine Marceaux (Nymphomaniac’s Charlotte Gainsbourg), and the secondary roster of talent plays pretty deep. Nobody steps outside their comfort zone delivering exposition, wide-eyed shock and awe, and acute myopathy towards impending human extinction, but then Emmerich ain’t directing Shakespeare here (much as he’d obviously like to) and the script doesn’t demand much from most of the cast.

Where Resurgence really flails is with its younger cast, particularly the trio of Hemsworth The Lesser, Jessie Usher and Maika Monroe (and to a lesser extent Travis Hope and Angelababy, both of whom provide comedic/romantic support roles), on whom much of this film rests. Hemsworth and Usher play Jake and Dylan, former Air Force buddies who have fallen out after Jake nearly kills Dylan by accident during training. The backstory is flaky at best – it feels vaguely Top Gun-ish only without the cheese – and Hemsworth’s romantic history with Whitmore’s daughter Patricia seems contrived purely to keep certain characters within the same orbit (forgive the space humour). Usher, obviously a fill-in for Will Smith’s decision to avoid this movie, lacks the screen chops to convincingly portray the role he’s given, with a vocal range approximately half than necessitated by the script and a charisma so bland it makes wood look interesting. Monroe, leaping into the fray after the original actress playing Patricia, Mae Whitman (who isn’t entirely unattractive these days, but probably wasn’t quite the “skinny hot white girl” poster chick the film was aiming for…. booo) is solid in the part, and delivers a sweet (but criminally underwritten) chemistry with her on-screen dad in Pullman, but against Hemsworth might as well be screaming into the void as an actress. 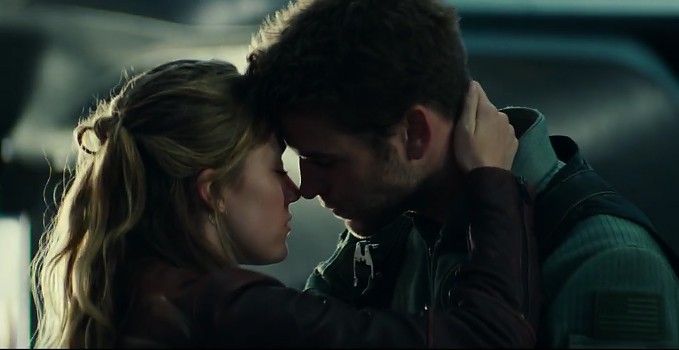 Independence Day: Resurgence works like you’d expect; it’s a rousing spectacle that successfully avoids doing much heavy emotional lifiting when it can smash-and-bash its way across the screen with gleeful abandon. Absurd plot contrivance (Levinson’s father manages to get from Florida’s decimated coastline to the salt flats of Nevada inside a f@cking day, driving a schoolbus full of kids – did anyone look at a map whilst making this movie?) and basic science aside (like, how the hell a tiny ship capable of holding three or four people tops can travel between Earth and the Moon with the skimpiest rockets and virtually no fatigue) the film rockets along on the absurd notion that you’ll buy whatever is put in front of your eyeballs. Character development takes place in cinematic micropurchases, subverting actual writing with exposition and plot momentum through inane banter, “whacky” comedy and some of the most blatantly idiotic leaps in logic to grace the screen since London Has Fallen, a film with which Resurgence shares very similar perplexing DNA.

Suggesting a sincere belief in their own abilities, but none in an audiences, Emmerich and his team have written a high-hokum absurdist escapade of Bergman-ian achievement that, while rousing to the eyeballs, anaesthetises the brain into a shocking sense of not being able to believe what it’s witnessing. As stupidly enjoyable as it was to take in, for all its destruction and cataclysmic euphoria (none of which resounds like the original, it must be said) and subtle nods to Emmerich’s far superior original, Resurgence is a disaster film in the sense that it’s a spectacular wreck. High on his own supply, Emmerich concludes this film by setting up another, effectively slapping the comatose audience by suggesting this ain’t the last time we’ll get to July 4th and find ourselves about to be annihilated by marauding alien invaders. Perhaps, Mr Emmerich, we should save some time and money and just let them win.