Sometimes, when you’re in the mood for a laugh, you want to watch something that elicits intellectual chuckles with smart, well-written dialogue. Maybe even some clever ensemble work that doubles as highbrow farce. And sometimes, all you want is to watch two dudes get high, go driving and see some titties. Harold & Kumar’s opening adventure (apparently there’s like a half dozen of these things or something) is a ribald, somewhat on-point stoner comedy that goes lowbrow as often and as hard as it can, and comes up trumps. Yeah, it’s stupid as f@ck, but holy shit if I didn’t laugh my ass off. 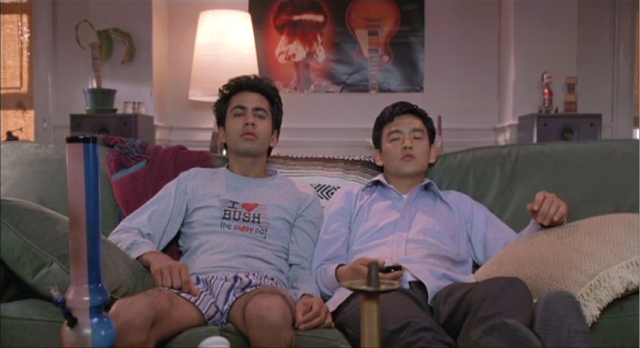 Harold (John Cho) works a lowly job at an investment banking corporation. His flatmate, Kumar (Kal Penn) is trying to avoid getting into medical school but somehow not get cut off financially by his surgeon father. One night, they decide to get high, and as you do when you’re stoned out of your nut, go get munchies – in this case, burgers at low-rent fast food chain White Castle. As you may suspect, Harold and Kumar’s drive to White Castle isn’t as straightforward as they hoped, finding themselves embroiled in scuffles with local street hooligans, a pustule-covered redneck mechanic (Christopher Meloni, unrecognisable but utterly hilarious) and his drop-dead gorgeous wife (Watchmen’s Malin Ackerman), a racist cluster of police officers (Sandy Bevans), a “trippin’ balls” Neil Patrick Harris (in one of the film’s most excellent sequences), and a sidebar journey to Princeton in search of more weed. As the night progresses, Harold laments not being able to talk to his neighbour, the beautiful Maria (Paula Garces), whom he adores.

Harold & Kumar Go To White Castle is the film equivalent of snorting Coca-Cola out your nose and finding it hilarious. It stings a little at first, but as the tears of laughter well up and you find yourself doubled over by how stupidly funny it all is, out come the laughs. Lowbrow comedy comes in many forms and while I don’t normally enjoy this kind of humour, sometimes you find a film that does it just well enough to actually be enjoyable. Led by the affable Cho and the keen Penn, the film’s statements about racism, appearance, expectations and social taboos ring true moreso now than even in 2004. Peppered with cameos and delightful comedic performances (especially, but not including, the aforementioned Chris Meloni, as the hideous Freakshow), plenty of drug, boob and sex references, and the oblique sense of karma threaded throughout, the film’s chuckles are superficial and quite poignant considering where we are societally now compared to then. 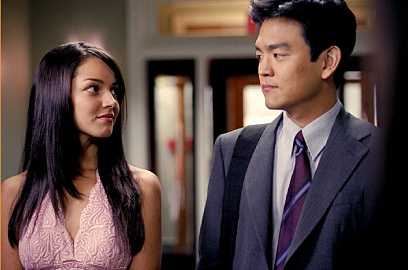 The plot, which serves only to transition the title characters from one set-piece to the next, is sparse at best, relegating all but Harold’s unrequited love subplot to the background of white noise servicing a drug-high-fuelled voyage through the New Jersey byways. Neither character is really honed to perfection, ragged and seemingly changing personalities between one scene and the next depending on the comedic requirement. Expecting any different from a film like this is asking too much, so you just have to relax and go with it; like a good enema, once you flush away the filth of expectation, the feelings you encounter are sublimely hilarious.

If it sounds like I’m digging deep to give this film its appropriate level of consideration, you’re right. The entirety of this review could be summed up simply by suggesting that drug humour, sex humour and references to entrenched police racism, ethnic profiling and archetypes of stoner comedy shtick adds up to a heck of a fun watch. Dare I say it, Harold & Kumar is relatively restrained compared to many of the gross-out films masquerading as “comedy” gracing our cineplexes today. Sure, the film features a few nice boobies, the gamut of drug references and allusions, spot-it-coming-a-mile-away plot developments and story hooks, and plumbs the depths of inane cinematic journeyman storytelling, but at least it satisfies the superficial junk-film cravings we all have from time to time.