Charting the rise and fall of Australian director Alex Proyas is to inflict hurt upon oneself. For a film-making talent as creative as Proyas to have stumbled into Gods Of Egypt is a dark stain upon a filmography that, to this point, had at least been intellectually daring even if not entirely entertaining. Stamping his style on mid-90’s cult classic The Crow, and following that up with probably his best film, Dark City, Proyas’ oeuvre since has slowly dwindled in anticipatory mediocrity; Garage Days was excellent but hardly seen, I Robot was well viewed but largely generic, and Knowing was a massive creative vacuum from which very few escaped unscathed. So we come to Gods Of Egypt, a sprawling adventure epic set in a fantasy-world Ancient Egypt, filmed in Australia, starring a few well known faces but hardly any well known names. 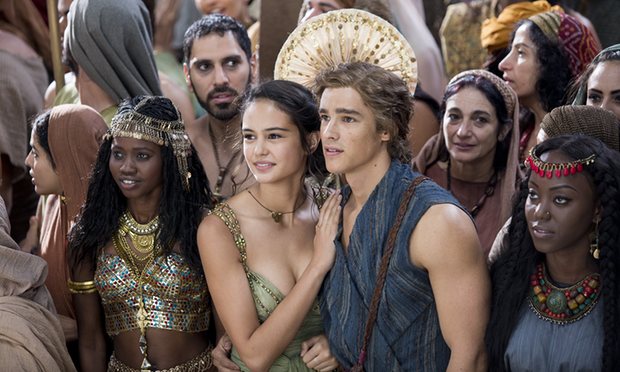 I say hardly: Gerard Butler’s work in 300 catapulted him to the top of the “muscular action men” pile, and while he’s squandered his career appearing in all manner of trash there’s a good argument that Gods Of Egypt might be the worst of the lot. The rest of the cast, including Game Of Thrones’ Nikolaj Coster-Waldau, current Black Panther Chadwick Boseman, Dark City’s Rufus Sewell, old Aussie stagers Bryan Brown (Cocktail), Geoffrey Rush (Shine, Pirates of The Caribbean, etc) and up-and-coming actor Brenton Thwaites (Oculus, The Giver) are mired in badly written junk dialogue, nonsensical action set-pieces, ridiculous internal mythology and a sense that the film has as much integrity as a Happy Meal toy. Indeed, the plastic-y feel of the film’s CG and cinematography made me half expect to see the golden arches emblazoned somewhere in a weird Easter Egg to viewers.

The plot centres around Coster-Waldau’s Horus, who is usurped from the King’s throne by his uncle, Set (Butler), and cast into exile. Set, turning Egypt from utopia into a fascist state, kills all who oppose him, leaving human mortal Bek (Thwaites) to attempt to rally Horus to fight his uncle and save his fiancée Zaya (a stunning Courtney Eaton) from death, and Egypt from destruction. Turn about, turn about, Gods Of Egypt slakes your thirst for all that’s fun and cool in Egyptian mythology whilst remaining annoyingly stupid the whole time. Proyas’ film has a stifling lack of heart, belied by its uneven tone and ponderously vapid plotting: not to mention the acting. If Gods Of Egypt was icecream it’d be vanilla; in spite of all the money thrown at the screen, in spite of Proyas’ attempt to inject some life, humour or weight to the fanciful goings-on, Gods of Egypt remains as bland as underboiled water.

Gods Of Egypt’s core problem is its lack of focus. By that I mean it struggles to assert its own identity amid the leaky archetypes it throws at the viewer. One part Indiana Jones, another part The Mummy (the shitty CG bits), and a whole load of PG13 nonsense, Gods of Egypt runs the gamut of cliché and finds itself wanting, and badly. The film has so many characters it barely knows which one to spend time on; Thwaits’ Bek is probably the central character, but he’s only in it in piecemeal moments, left to wander between the shadows of both Coster-Waldau and Butler, as the story vacillates between Daredevil’s Elodie Yung, as Horus’ lover Hathor, Bek and Horus’ trek across Egypt, and Set’s constant angry face at ruling the land he’s conquered. Character arcs feel thinly portentous, encumbered with the weight of expectation but lacking both the complexity and the nuance to rise above mere iniquity. 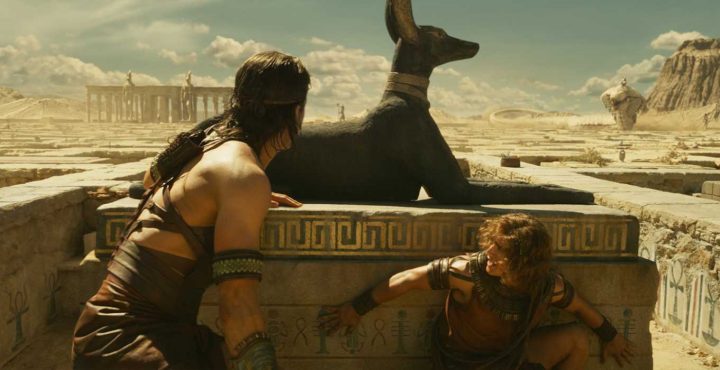 Proyas, perhaps unwisely, seems content to jump between hugely lavish action set-pieces, CG spectacles that waver around “good enough”, dip occasionally into “awful” and in a few occasions hit “Marvel Movie Average”. The action sequences lack fluidity and coherence, lost among editing that feels laboured and lacking in ambition, whilst Marco Beltrami’s bombastic score threatens to overwhelm everything entirely. Proyas’ mastery of action was established in I Robot’s CG-fuelled excitement, but somehow the man can’t generate anything similar here, although I will give major props to the costume department for making sure all the women in this film cannot possibly hide their boobs. I mean, all of them… it’s a booby-film in many ways.

At its very worst Gods Of Egypt plays like a very expensive high-school film project. At its best, it’s a timidly plain adventure film that’ll entertain the most undiscerning viewers, distract those who have even a marginal expectation, and annoy everyone else. Proyas and his team came in for a lambasting for “whitewashing” his cast in having white actors playing the roles of Egyptians, but for the life of me I can’t see how casting those of the correct ethnicity would have made this film any better. Perhaps they should be thankful for that.