Fast-paced, energetic crime thriller sees a stunning cast of A-list talent plumbing the depths of wrongdoing in a shoot-em-up slam-bang potboiler that feels like a cousin of Michael Mann’s Heat or Antoine Fuqua’s Training Day. A crew of crooked Georgian cops and a trio of criminals band together to make money doing the bidding of a Russian matriarch, only to find that when she reneges on a deal and asks them to do “one last job”, it all goes south pretty quickly. Betrayal, death, mistrust and revenge swirl like a bloody poison throughout Triple 9’s pulp-styled underworld aesthetic; violent and kinetic, bloody and ripping, and ripe with John Hillcoat’s pulsating direction, this isn’t a film for the squeamish. Triple 9 hits hard, hits often, and although it ain’t the classic it wants to be, is good enough to warrant paying out for such a top-tier ensemble. 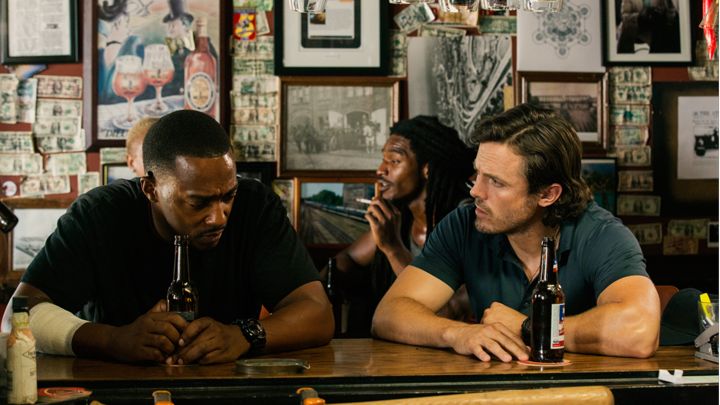 That ensemble works hard to mine what little character development is on offer in Matt Cook’s screenplay, which mashes up the brutality of life on the streets of modern-day America, the corruption and shadier aspects of policework, and the high octane thrills audiences expect in cinema today. The central premise, about a selection of crooked cops and their plan to kill a fellow officer to provide a draw for a major heist they’re pulling off, feels torn from the headlines in the way it’s depicted as almost a foregone conclusion that every police force would have issues of morality and corruption within it, almost to the point where it’s useless fighting against it.

Triple 9’s sweaty, bloody world of underbelly narrative crackles with the frisson of current socio-political anthems circulating the American landscape. The greyness of the character’s morality is crucial to the film working like it does, even though nobody on the screen really offers a compelling motivation other than basic, human survival. Perhaps that’s Triple 9’s advantage – it’s a survival film of some kind. Kate Winslet’s Russian Mafioso character is the catalyst for the film’s plot, effectively blackmailing the criminal element to doing her bidding in spite of their reservations and outright refusal. To put it mildly: children, family, everyone is a pawn in this game of greed and corruption, and Winslet sells the matter-of-factness to this life with chilling ease. Standing tall as one of the “good” criminals, crooked cop Michael Atwood (Chiwetel Ejiofor, probably the last person I’d expect to show up in a film like this) is desperate to see his son again, although his life is inextricably intertwined with Winslet’s Vlaslov (his kid’s mother is Vlaslov’s sister) and it’s a scenario that, as the film develops, you kinda think isn’t going to end well for him regardless of what transpires. Ejiofor is better than the material he’s offered, and is compelling in a role I felt lacked the “leading man” characteristic the movie so badly needed. 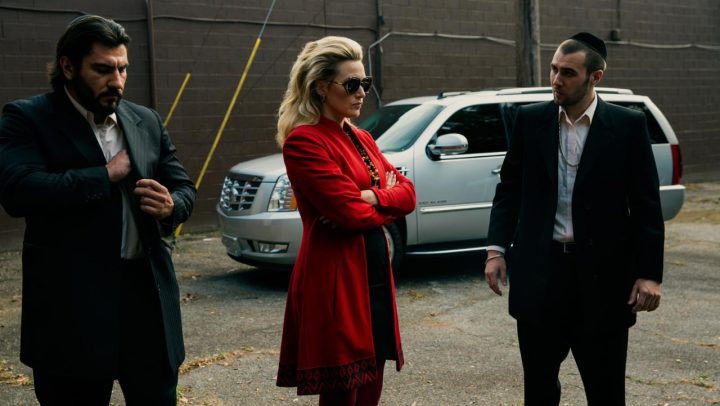 Ejiofor is backed up by names like Anthony Mackie (currently The Falcon in the Marvel Cinematic Universe), a wretched Aaron Paul (dear Lord I had to check the credits to be sure it was him, he looked so haggard), and Norman Reedus (who is exactly the type of actor I expected to see in a film like this), while it’s always a pleasure watching Clifton Collins Jr go about his manic-eyed business. On the flip-side, playing the legitimate Good Guys, are Woody Harrelson, as a slightly drunken detective working the case of the gang’s activities, and Casey Affleck, as the gang’s fall guy in Chris Allen. Affleck’s gum-chewing almost ruins every scene he’s in (darn it dude, maybe just smoke a cigarette or something less distracting) but the actor is world-weary and forlorn – but still morally good – that he provides a sense of light among the darkness the film otherwise offers.

If the film has a significant failing its in the delivery of the female characters outside of Winslet. Teresa Palmer is a great little actress but is wasted here as the wife of Affleck’s character, and Batman V Superman’s Gal Gadot, currently Wonder Woman, is as far from wonderful in the pitifully objectionable role of Vlaslov’s honeypot sister. Asking for well rounded female characters in a muscular action flick like this is a lot like pissing into a strong wind, but one might have asked for something more than Triple 9 grants us.

If I was a better film critic I’d probably use my concluding paragraph to pull out terms like “noir” and “wallowing” to describe this urine-soaked movie; the tinge of green and sickly yellow with which Hillcoat varnishes his story provide a sense of unease and stagnant humanity, perhaps the most appropriate aesthetic one can use to describe Triple 9. With its electrifying electronic score, razor-wire editing and action sequences, and desperate storyline of infested corruption, Triple 9 offers high octane thrills and plenty of will-he-or-won’t-he-survive twists and turns. Hillcoat turns in a blistering low-key action film that delivers when it has to.