Expected sequel to the 1982 success Conan The Barbarian, this Richard Fleischer-directed fantasy epic continues Arnie’s rising-star arc as the legendary Robert E Howard character, albeit with a few new characters to contend with, and a strange malaise hanging over the whole production. While the film features much of the original film’s pulp-styled violence and singularly dimensional plotting and characters, and nonchalantly plants a fifteen-year-old Olivia d’Abo as a sexual object for the audience, Destroyer somehow manages to trip itself up by being a poor imitation of John Milius’ cult classic. I guess as a continuation of the journey began in Barbarian a few years prior, Destroyer had the opportunity to continue the Conan franchise in some compelling new way, but it doesn’t. Wasn’t the literary version of Conan a serialised pulp identity? A bit like James Bond, his adventures weren’t contiguous, and the rotating roster of supporting characters could change from book to book, making the man’s itinerant lifestyle even more isolating and masculine. Unfortunately for this film, it’s a hodge-podge of inadequacy. 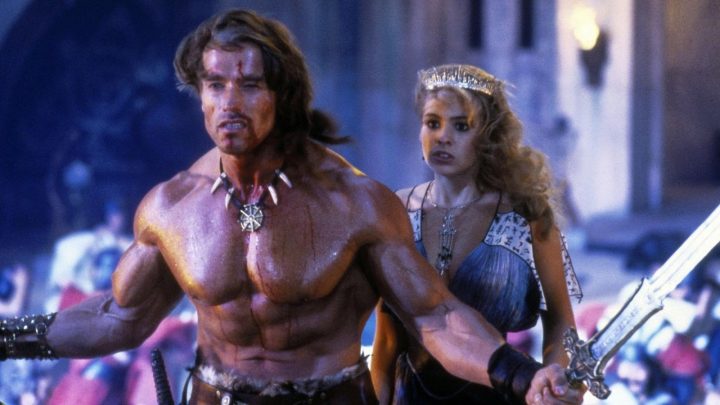 Plot synopsis courtesy Wikipedia:  Conan (Arnold Schwarzenegger) and his companion, the thief Malak (Tracey Walter), are confronted by Queen Taramis (Sarah Douglas) of Shadizar. She tests their combat ability with several of her guards. Satisfied, she tells Conan that she has a quest for him. He refuses her, but when she promises to resurrect his lost love, Valeria, Conan agrees to the quest. He is to escort the Queen’s niece, Jehnna (Olivia d’Abo), a virgin, who is destined to restore the jewelled horn of the dreaming god Dagoth; a magic gem must first be retrieved that will locate the horn. Conan and Malak are joined by Bombaata (Wilt Chamberlain), the eunuch captain of Taramis’s guard. Bombaata has secret orders to kill Conan once the gem is obtained.

Riding across country, killing folks and porkin’ babes. That’s the Conan way. Conan The Destroyer features a surprising amount of riding, walking and running across country, and has it’s share of killing, but comparative to its predecessor features very little of the sexual liberty Milius established as the franchise’s aesthetic. Grace Jones spends the film nearly nude, covered only by the barest of bare leather costuming, while Olivia d’Abo’s sexuality is both uncomfortably mature for a girl her age, and frustratingly awkward. One of the film’s funniest moments if a brief conversation between d’Abo and Tracey Walter, in which he can’t quite bring himself to explain the birds and the bees to the innocent virginal princess. But exploiting an under-age girl’s sexuality is the least of this film’s sins. 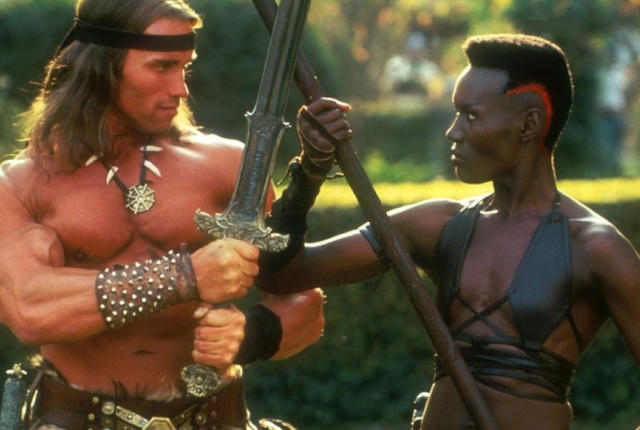 Destroyer wastes a talented cast with a pedestrian script, an even blander plot, and gloriously insipid action scenes. The dialogue is as flat and simplistic as you’d expect, and challenges Arnie’s marble-mouthed delivery nary a jot with single-syllable exclamations. Tracey Walter’s wooden performance and side-eyed, unsure delivery is laughable, while Grace Jones’ performance is either hilariously stupid or fabulously over-the-top – I’m unsure which. Mako – poor, poor Mako – is wasted as the returning character of Akiro from the previous film, while Wilt Chamberlain’s gigantic Bombaata is fur-covered brutality, without a shred of compelling motivation. Sarah Douglas (who played Ursa in Richard Donner’s Superman movies) flounces as the devious Queen Taramis, in probably the best performance of the film, while an uncredited Andre The Giant, better known for his role in The Princess Bride, spends the film hidden beneath a layer of prosthetic makeup.

The film’s two principal roles, that of Conan and d’Abo’s Jehnna, offer the most to audiences craving even the most obvious character development. And by that I mean they have the most compelling arcs between them. d’Abo is radiantly beautiful, innocent and most definitely virginal, and aside from being ignorant as to the ways of the world is really just eye candy here. Arnie, meanwhile, gets ample opportunity to flex his muscles physically, as Conan the Shirtless. Fleischer’s camera delights in continuously focusing on Arnie’s obvious Mr Olympia physique, to the point it almost becomes laughable, although in fairness the film’s fascination with skin and fantastical eroticism, not to mention Freudian themes of “horns” and sacrifice, is appropriately on-point to the genre’s archetypes.

The film’s action sequences range from half-decent to terrible – poor stuntwork, a deficit of conviction and shaky combat routines leave much of this film laughably silly. The faceless minions attacking Conan and his friends seem ill-trained for the task of actually fighting, and as usual the blood, gore and limb-shredding is of the typically 80’s flavour. Okay, I get it: this is meant to be simple, fantasy-oriented fun, and should be taken with the proverbial salt bath, but Conan The Destroyer just comes off as asinine. Am I thinking about it too much? Am I asking too much of a film about a muscle-bound hulk striding across the land with sword in hand, defeating zealous evil and pining for his dead woman (Valeria, who returns in corpse form early here)? Probably, but I found myself simply bored by this movie. While I found the original Conan at least entertaining to a point, by the end of this one I felt as if I’d wasted nearly two hours for nothing.