If you’ve never heard of Mune before, worry not, because I hadn’t either until one of my kids stumbled upon it while I was looking for new films to watch in avoiding the umpteenth viewing of Hotel Transylvania 2. New to us, that is. Originally a French production, we managed to grab a copy in English and I’ll be darned if it isn’t the most pleasant, surprising, delightfully animated little film I’ve seen in ages. With a plot you’d describe as “fancifully kooky” and a roster of characters more in keeping with an Old English fairy-tale, this aspirational fable is both charming and beautiful and, if my kids have any say, thoroughly recommended. 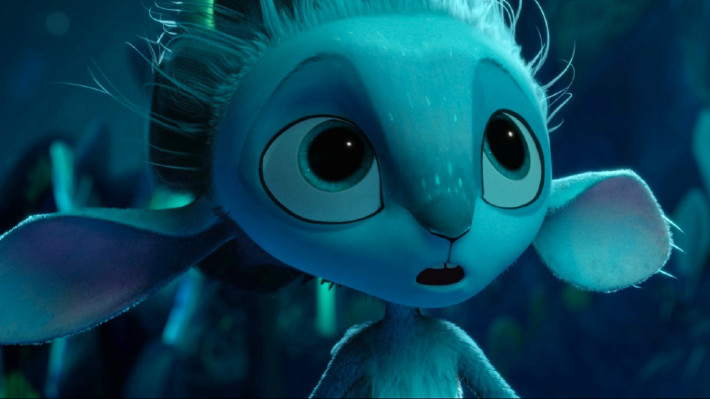 Plot synopsis courtesy Wikipedia:  In an imaginary world, a small Sun and Moon were made by the first Guardians to warm up a small planet inhabited by different marvellous people. The first Guardian of the Sun harpooned a star to keep it close to the planet, and hung it by chains to a mobile temple that is like a huge quadruped animal made of rock. The first Guardian of the Moon descended into the world of dreams and carved the Moon in a quarry of oneiric stones, and threw it into the sky. Since then, the Guardians follow generation after generation and preserve the harmony of the world. The people of the day and those of the night live in relative harmony, even though they are very different from each other. But in the depth of the planet, Necross awaits the opportunity to set darkness over the world.

The film revolves around two new Guardians, Sohone (voice of Trevor Devall) and Xolal (Michael Dobson), who are due to assume their generational roles before the impish faun, Mune (Joshua Ballard) is accidentally chosen to be the Guardian of the Moon by the world’s “most pure creature”. Initially excited at the opportunity, Mune inadvertently puts in danger the entire world, after accidentally pulling the moon off course, which causes Sohone to become angry and attempt to right the imbalance. Dastardly titan Necross (Davey Grant) sends his minions to sow discord and steal back the sun, while Xolal, feeling slighted that his training to become a Guardian has amounted to nothing, is consumed by thoughts of jealousy and revenge. Meanwhile, helping Mune and Sohone get the sun and moon back into the sky where they belong, is Glim (Nicole Provost), a wax creature (who melts in direct sinlight and coalesces in the darkness) who has an understanding of astrophysics and “learning”.

Mune: Guardian Of The Moon is just a beautiful, beautiful film. Exponential praise aside, the film glows throughout with an ethereal quality, a whimsy and sly humour offset with one of the most gorgeously animated fantasy worlds I’ve ever seen. The film feels like a living painting, a breathing entity of fanciful creature design, Tolkien-level backstory and legendarium creation, and a masterful ability to give characters life in a way many films – Epic, I’m looking at you – can’t quite deliver. Every frame of this film is sublime, a tapestry of design and execution that is utterly seamless as these instantly identifiable characters capture the imagination; my kids sat entranced, so if nothing else it gets their tick of approval. But Mune is wonderfully animated, a visual treat at virtually every step that is both ravishing and off-kilter all at the same time. Blending Jim Henson’s The Dark Crystal with Luc Besson’s Arthur & The Invisibles, a hint of Tim Burton and a fair swab of high fantasy, Mune is a film that works in the kind of understated way you’re flabbergasted it wasn’t a monster success.

If there’s a weakness at all to Mune’s invitation to visit the world it exhibits, it’s the largely rote storyline. Basically a Quest narrative, more specifically an Unintended Hero subtext, Mune is kinda predictable when you think about it. The villain, the monstrous Necross, is an impossible-to-vanquish character, inversely enormous to Mune’s impish stature as one of the world’s smaller creatures. The slighted sub-villain, the strong-willed yet entirely ornamental female character, not to mention s smattering of comedy sidekick parts (the film’s two imp characters, henchmen of Necross, struck me as virtual clones of Pain and Panic from Disney’s Hercules, which kinda annoyed me) and awesome sight of the two living temples of the Sun and the Moon striding across the landscape like behemoths. Character beats for Mune felt predictable (in spite of the film’s cunning character design and flawless animation) and with few exceptions, you could almost tell where the film was going to manoeuvre in terms of arcs for the three central characters of Mune, Glim and Sohone. It’s a shame the intricacy of the film’s design work didn’t translate into a story with more complexity.

In saying that, a world of pure wonder and childlike glee awaits those who venture into Mune’s rapturous fantasy. Inventive, told with sublime skill and clever international visual humour, and never really boring (in spite of its overall plot feeling cobbled together from other places), Mune’s luxurious style and sense of wonder and awe takes me back to classic 80’s treats like The Neverending Story or Labyrinth, with a genuine sense of world-building and conviction behind the creative process. It stumbles with complex story ideas beyond its incredible mythology, but both adults and children alike will love this one.