Sitting on the bus this morning I caught the announcement teaser from Paramount Pictures that Michael Bay’s fifth shot at turning the Transformers franchise into a series of films we can anticipate rather than endure was about to go into production in June. Not only did it reveal that tidbit of information, the teaser also revealed the title of the upcoming explodathon – The Last Knight. Weirdly, I had visions of Paul Bettany as an Autobot version of Chaucer screaming hysterically at fleeing humans about how the battle would live on in history as one of the greatest. 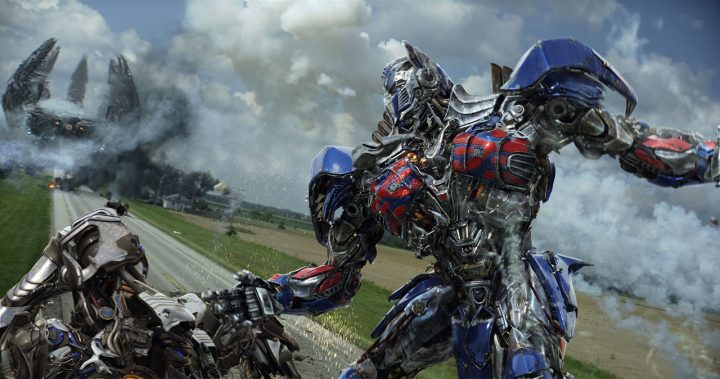 For four films now we’ve contended with the Autobots and Decepticons duking it out on Earth: just once, I’d like to visit the galactic extremities of what a Transformers Cinematic Universe (patent pending) might involve, because surely to goodness the Cybertonian War didn’t just conclude with the destruction of the ‘bot’s homeworld and transition directly to Earth? Following Optimus Prime’s journey offworld to search out whatever he’s searching for is a good start, and perhaps the series needs to spend some time away from folks like Shia LaBeouf and Marky Mark’s hot underaged-but-consentually-raped daughter to gain perspective on why their battle is so goshdarn important.

If the franchise does spend time away from Earth, then Bay is definitely the man to bring that vision to the big screen, and I don’t say that lightly considering the trainwreck he made of the last three films. Bay has a specific aesthetic for the Transformers, but I think as a pure sci-fi, outer-space spectacle he’d have the ability to work a lot broader in ratcheting up the epic scope of Autobots V Decepticons. On Earth he’s a tad restricted on the maximum destruction he can rain down on us poor humans, even though he’s entirely unlimited to the number of nubile hotties he can squeeze into a single frame of film. Are both mutually exclusive? Meh.

If the saga continues to remain on Earth, I’m inclined to suggest other directors should pick up the slack. Including human beings in a Transformers narrative does predispose them to require actual… you know, human emotion, and that’s something I’ve yet to see Michael Bay deliver on-screen with any sense of nuance. Typically it’s all just screaming, cursing and throwing clickbait cheeseball dialogue at the audience. Hand the franchise to a director with a sense of scale to work with the visual effects, but also deliver an emotionally resonant journey the audience can empathise with.

The thing about Transformers as a cinematic franchise is that they’ve become exactly the kinds of films we ask for, but don’t really want. We expect giant robots battling on Earth with catastrophic stakes and monumental destruction, but when we’re given it it doesn’t seem to be as good as we’d hoped – many and most will lay the blame for this at Bay, who – let’s face it – is terrible at filming human beings but actually pretty good as carnage and destruction, but hold fire rabid lynch-mob: Bay’s direction of action and “epic” set-pieces is top class, he’s just shouldering inept producers who cannot say “no Michael, that’s a shitty idea” and screenwriting that feels like a pubescent masturbation addict was let loose on a typewriter. Bay delivers the kind of rousing robot-on-robot action we’re wanting, probably better than anyone else on Earth could, but the foundation of story and characters are (and I’m being kind) odious in the extreme. It undermines what should be sweet-ass metallic deliriousness and turns it into stultifying, ineptly written idiocy.

Of course, all this postulation is undermined by the Transformers‘ movies utter destruction of global box-office receipts: it’s a multi-billion-dollar earner for the studio (and I’m sure Hasbro gets a cut too) so The ‘Mount unlikely to change formula until one of them is a total bomb at the cinemas. Which, if people’s continued defiance of what constitutes “good filmmaking” is anything to go by, won’t be any time soon. Here’s hoping somebody at Paramount wonders what would happen if these films were actually good. The sky, I’d wager, would be the no limit to where this franchise might go.

4 thoughts on “Transfor-meh – Where To Next For Bay’s Bots?”