Not quite Black Swan, but close.

Acclaimed by no less a luminary than Martin Scorsese as one of the greatest Technicolor movies of all time, The Red Shoes is one of a number of films made by writer-director-producer team Michael Powell and Emeric Pressburger, credited under the alias The Archers, who had come off the back of Black Narcissus prior to this film’s release. Noted for its stunning use of colour, the film’s ballet-inspired storyline echoing Hans Christian Anderson’s story of the same name is a lusciously mounted, gloriously theatrical classic, and deservedly so. 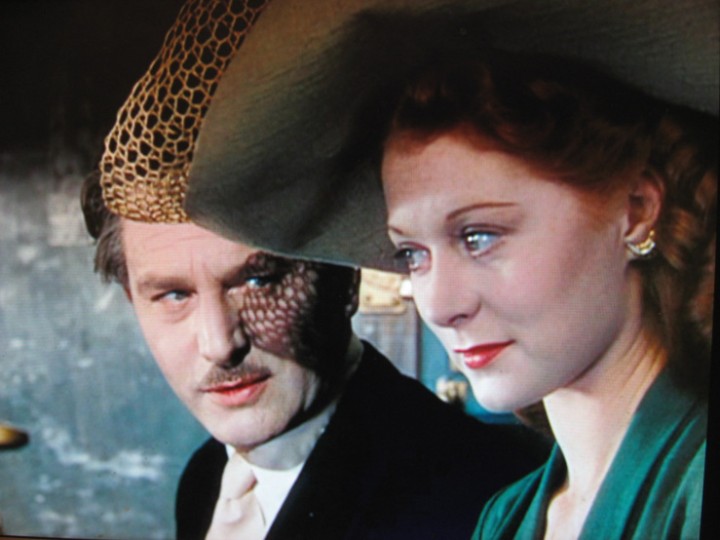 Young up-and-coming ballet dancer Victoria Page (Moira Shearer) works her way into the company of ruthless impresario Boris Lermontov (Anton Walbrook), hoping to fulfil her dream of becoming a prima ballerina. She meets the company’s choreographer, Ljubov (Leonide Masine), and also newly appointed orchestral coach Julius Craster (Marius Goring). When the company’s lead dancer unexpectedly becomes engaged, and leaves, Lermontov takes a chance on Victoria, promoting her to lead on the proviso that she is not to fall in love with anyone. Craster, meanwhile, composes a new ballet based on the story of the Red Shoes, and it becomes a hit. Inevitably, Craster and Victoria fall in love, prompting Lermontov to fire Craster and reluctantly (petulantly) allow Victoria to follow him. However, Victoria is torn between the love she has for Craster, and wanting to be with him, and her dreams of dancing for the best company in the world, and through circumstance is drawn back into Lermontov’s world.

The Red Shoes has a number of things going for it, not the least is its cinematography and dynamite dance routines. First, I should point out the inclusion of legendary Australian ballet icon Robert Helpmann, portraying the company’s lead male dancer, Ivan Boleslawsky, who handles his difficult accent with conviction. Second, I tip my hat to the final screen performance of legendary Albert Basserman, who not only makes every other actor in this movie look positively second rate by comparison, but never once overcompensates for what is, in essence, a minor role. Third; the direction from duo Powell and Pressburger is superb.

The Red Shoes is eminently worthy of its status as a classic film. The story is easy to understand, the characters largely formulaic but well acted by Shearer, Goring and Walbrook in the leads, and the production value on the movie, particularly the vaunted dance sequences and costuming, as well as the breathtaking – let me repeat that: breathtaking – cinematography, make this an access-all-areas movie that, like all good tragedies, doesn’t always end up with the lovers kissing as the closing credits roll. No, The Red Shoes is just gorgeous, a film treat that feels like eating caramel sweetness through your eyeballs. 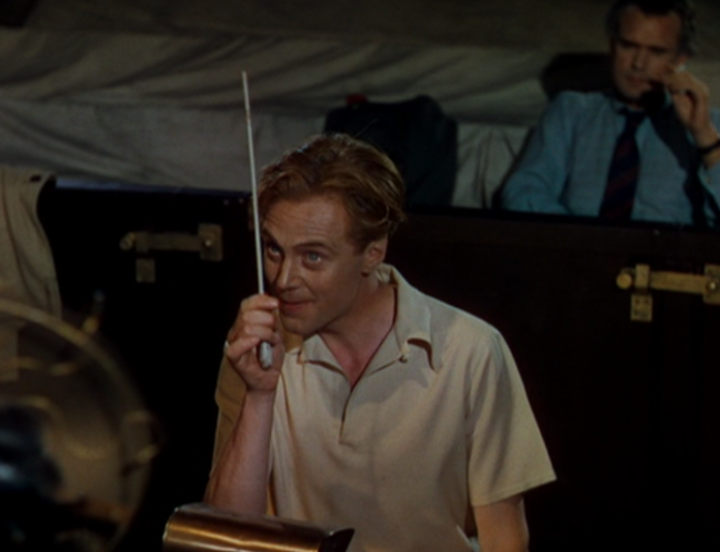 Part of the accomplishment of The Red Shoes is casting dancers in the part of dancers. Whereas most Hollywood films might cast a Leading Lady of the popular time, get her to “pretend” to dance a little, and fake the rest, this UK-based film did quite the opposite. Red-headed ballerina Shearer became an overnight sensation following the film’s release, so much so that the role practically followed her everywhere afterwards, even into other films or ballet productions. Her co-star, Marius Goring, was a noted British stage actor of the time, and his performance as Julius is both wild-eyed and forceful, in keeping with his role as the film’s resident creative genius. Although both Shearer and Goring bring plenty to their respective roles, for me the standout is Anton Walbrook, as Lermontov, who dominates the film and the characters within it like a bizarre clone of Charles Foster Kane.

Lermontov’s desire to control people, especially Victoria, following the previous lead dancer’s resignation, is in stark contrast to the more bohemian attitudes of the rest of his company. Understandably he butts heads with those in his employ often, usually for his hard-bargain, no-nonsense attitudes to his business, and with this ferocious attitude comes success. But the symbiont relationship with the “talent” he employs obviously drives a perfectionist such as himself to distraction, for it’s the one thing he cannot control, and that’s people’s emotions. Walbrook nails the role, making Lermontov both a protagonist and an antagonist in this film, a rare feat for a film so distinctly saccharine in its generic plotting. For the most part, the broad outlines of the plot are predictable, with only the nuances and subtle twists and turns less so. Walbrook’s at times sly, at times bullish, and always commanding performance roots the film in a theatricality that embodies the very nature of the film’s setting – it’s a ballet company, after all – bringing audiences into the backstage world of professional dancing with a wallop. His final, tearful announcement at the end of the film is both “well, you deserve it” and “damn, that’s heart-breaking” at the same time; sincerely, he’s that good. 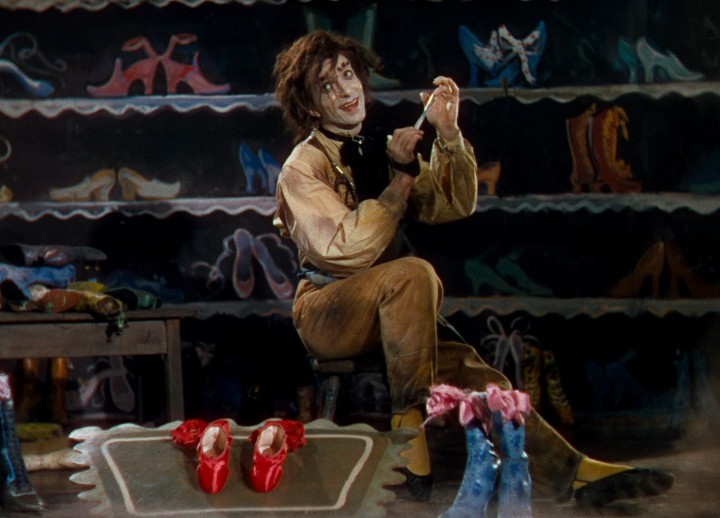 The film snagged an Oscar for both the original score elements, and what we now call “production design”, that is, art direction and set decoration. It was also nominated in the Best Picture, Editing and Directing categories: nowhere did it get anything for its luscious, sublime cinematography. The Red Shoes is utterly gorgeous, no small thanks afforded to a complete restoration instigated by Scorsese and carried out by Warner Bros, and the film simply beams with luxurious colour and textures. Although shot in the square 1.33 aspect, as was common in the UK at the time, The Red Shoes is no less an epic of lighting, framing and colour experimentation than the widescreen blockbusters that would follow it barely five years later. Every shot of this film is magnificent, a triumph of the trifecta of behind-camera talent: lighting, costuming and set design.

The film’s magnificent colour palette draws the eye across the screen, and whenever anything red appears, it’s a rich, vibrant, almost-living tone that is specifically used to focus the audience’s attention on that object. DP Jack Cardiff, who would go on to work with the likes of Hitchcock (Under Capricorn), John Huston (The African Queen) and and King Vidor (War & Peace – 1956) among others, gives the film a slightly soft look, as if the film occurs in some dream-state the characters are unaware of. Appropriate for a film based on a Hans Anderson fable, I suppose. Cardiff’s work here is sublime, and as I mentioned before, every shot in the film looks exquisite, a postcard of cinematography worthy of framing in the Louvre. From the dull-grey London back-alleys and rain-soaked streets, to the bright sunshine of Paris and the vibrant textures of Monaco’s coastal delight, The Red Shoes is easily one of the most carefully constructed visual delights I’ve seen in recent years.

I’m the first to admit that ballet isn’t really my cup of tea, as I find it a little bit wanky, but that doesn’t stop me from raving about The Red Shoes as a cinematic treat you really should try. The ballet feels secondary to the film’s story of divided loyalty, to be honest, but whenever the music kicks in and the pointy-toed set strut their stuff, it does look wonderful. The surrounding love story is formulaic and perhaps a tad derivative given it’s a cliché overused in the decades since, but there’s a soul hiding behind the film’s flashy, opulent staging and overly theatrical acting performances that can’t be hidden. The Red Shoes is delightful in every way.