Director :  Ben + Chris Blaine
Year Of Release :   2015
Principal Cast :  Fiona O’Shaughnessy, Abigail Hardingham, Cian Barry, Elizabeth Elvin, David Troughton.
Approx Running Time :  99 Minutes
Synopsis:  After his girlfriend Nina dies in a car crash, Rob unsuccessfully attempts suicide. As he begins to overcome his grief, he falls in love with a co-worker, Holly. Their relationship is complicated when Nina, unable to find rest in the afterlife, comes back to life to sarcastically torment them whenever they have sex.

I said in my review of The Forest that basing your premise around suicide was a risky to a film’s enjoyment – it’s not a concept I find particularly “entertaining” per se – and here we are again, with Nina Forever, a film delving into death, suicide and the afterlife; and yet, unlike The Forest’s bland, casually inappropriate propagandising of people’s tragedy, Nina Forever tracks in a decidedly different direction and, by and large, works. A small independent film out of the UK, Nina Forever’s Kickstarter-funded enterprise and coercive narrative is palpably creative, a real seat-of-the-pants film-making style that hits its mark like a fist to the face, and seemingly effortlessly glides through its horror aesthetic. 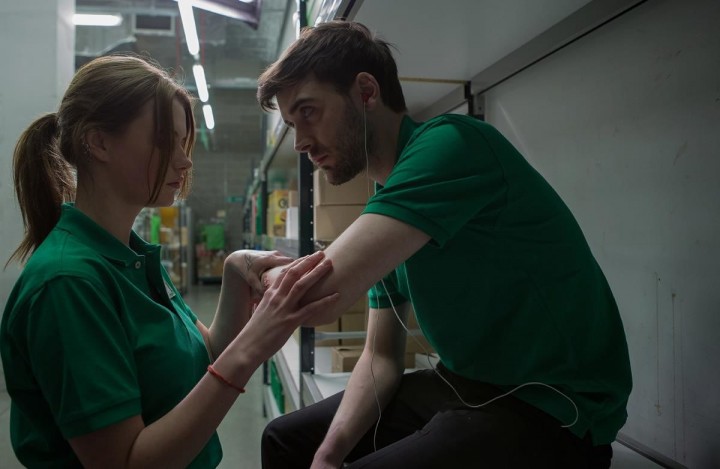 Nina Forever is one of those films that is impossible to describe without causing people to either roll their eyes or gaggle in disbelief at your insanity, and had I not seen the film for myself, I’d be among those who scoffed at its very premise (which is described in its simplicity in our synopsis above). With its urban inanity bubbling away around the bloody hodge-podge, Nina Forever’s softly-softly approach to grief and loss makes for grotesquely uncomfortable viewing in the sense that it never tries to hid behind cinematic tricks. The core trio of characters, Rob (Cian Barry), Holly (Abigail Hardingham) and the recently deceased Nina (Fiona O’Shaughnessy) prove a compelling mix of the bizarre and the realistic; Rob and Holly are connecting over tragedy, and Nina is that tragedy, although not one the pair can reconcile due to her continued arrival during their lovemaking sessions.

Intensely arousing for all kinds of wrong reasons, the film’s sex scenes (and there’s a few) are weird, skin-crawling in intimacy and erotic in an asphyxiating, jarring black humour kinda way, but beneath the freaky blood-fluid and overt sense of oblique storytelling, Nina Forever has a fair swathe of heart. No, it’s not the most hospitable film ever made, and it certainly won’t be everyone’s cup of tea (I was going to remark how similarly bizarre it was to Under The Skin, but since I found this film far more approachable even in its bizarreness, I’m loathe to make the comparison officially), but there’s some nice subtext about “moving on” and dealing with grief, and reconnecting with people after a deep personal trauma. If I could describe it simply, it’s a Gothic love tragedy, and leave it there. The odd metaphor of the lingering memory of a suddenly dead loved one, and how that impacts new relationships as the keen pain of separation starts to ebb, is the prime element I drew from this film, although I suspect upon future viewings there’ll be more to take away from it. 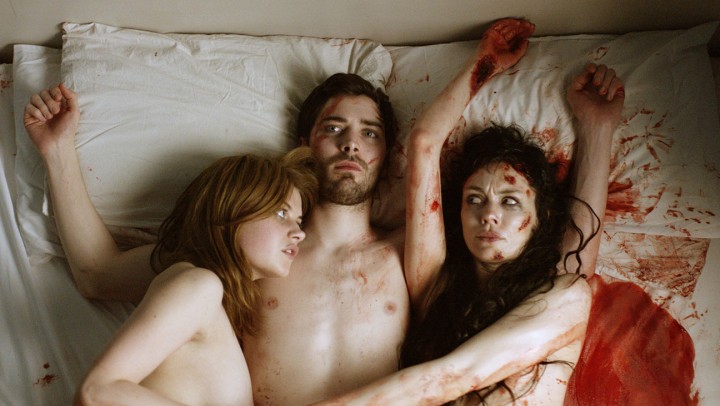 From a cast and crew perspective, the film astonishes. Performances by Hardingham in particular, abetted by the corpse of Fiona O’Shaughnessy in a pool of blood, cracking bone and utterly cringe-worthy sound design (in a good way!), lead the film’s tremulously dynamic visual cues, a deep focus, intensely personal style that echoes the body-horror of Cronenberg (a la Crash, mainly) and early David Fincher. High praise, indeed. Ben and Chris Blaine direct the film with a keen eye for nuance, and a razor sharp sense of economy. The film doesn’t “drift” into any kind of place that feels false within itself; rather, the brothers keep the film focused solely on moving the characters forward as they come to grips with the utterly bizarre situation. Blessedly, this isn’t a Laugh Out Loud Comedy, and the film avoids sojourning into that realm by maintaining an air of sadness, a blue melancholy reflected in the depressive monochromatic landscapes of the wet-drenched British setting. That’s not to say the film isn’t funny, it is in its own dark ways, but you won’t be rolling in the aisles with this one.

Nina Forever is a film designed to linger, to sit in the back of your subconscious and gnaw away at you for days afterwards. Deftly directed and acted with inner truth by the entire cast (even if the whole scenario is utterly preposterous) the film’s evocative tones and overripe melancholy speak volumes when words will not. Dark and moody, yet strangely fun and always sly, Nina Forever proves that not even death can overcome a great love affair.