Hellbound, the direct sequel to Clive Barker’s Hellraiser, sees many of the same cast return, as well as a few new additions, as Pinhead and his fellow Cenobites take centre stage alongside Claire Higgins’ malevolent Julia, who has returned to life following her apparent murder in the original film. Although Barker himself did not direct – he is credited as a producer – the sequel pretty closely adheres to the benchmark set by him in the original. Tony Randel steps into the director’s chair, delivering a dark, prudently graphic film that, if anything comes closer to achieving the type of skin-chill excitement I felt lacked the first time around. 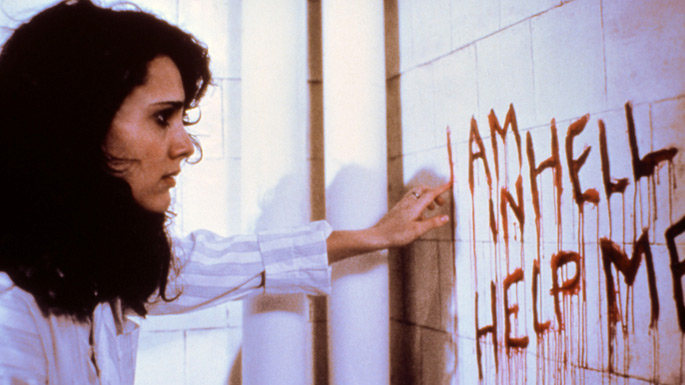 Kicking off where the first film ended, Hellbound sees Kirsty (Ashley Lawrence) at a mental hospital, the Channard Institute, run by Doctor Channard (Kenneth Cranham), who is secretly trying to obtain the cuboid Lament Configuration, which opens the portal to the world of the Cenobites, let by Pinhead (Doug Bradley). After discovering that Channard has resurrected her step-mother Julia (Claire Higgins), Kirsty and one of Channard’s medical students, Doctor McRae (William Hope), as well as another patient at the hospital, the virginal Tiffany (Imogen Boorman), must once again enter their worst nightmares to close the portal to the netherworld and… well, save the world.

You know something? I think this film is an improvement on the original. At least, I enjoyed it a lot more, and found more to engage with as a narrative, so in that sense it was more a complete story to me. Although some of the same problems which befell Hellraiser make their way to the screen again here, the scope of the sequel, together with a less straightforward narrative, make for thematically nightmarish and compelling entertainment. Echoing the first film’s core story, this time it’s Julia playing the part of the returning corpse, opposite Dr Channard’s inquisitive search for the secret to the Cenobites. Claire Higgins returns to the part of Julia with relish, a decidedly more mature and conniving performance this time than before (I think I said she was “wooden” in my review of Hellraiser), while adding Shakespearean actor Kenneth Cranham as Channard, who later becomes a Cenobite himself, proves to be a boon for the film. Cranham brings a sense of gravitas and authority to the role, and later as a Cenobite gets to utter several memorable lines – I suggest amputation – that go a long way to improving on the previous films’ lack of a sense of jeopardy. 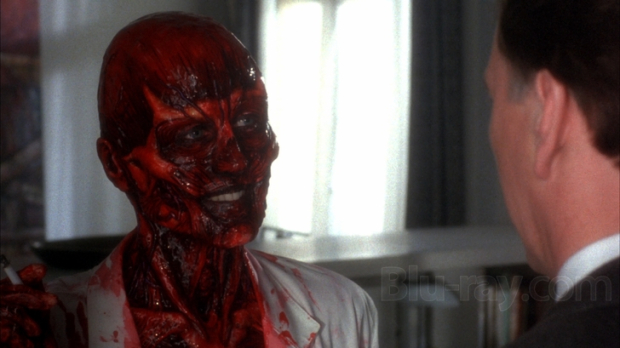 Sadly, Ashely Lawrence is also back, and also unable to act any more convincingly than my last morning shit, although in fairness she’s not asked to carry the bulk of the film that often, which is pleasing. She’s paired with Imogen Boorman, who spends most of the film without dialogue, as blonde engeneu Tiffany, who has a mysterious tragic link to the Cenobites’ Hell, while seeing William Hope, playing poor Dr McRae, as anybody other than Aliens’ cowardly Corporal Gorman is a pleasant change. Although the film’s production was changed at the last moment to bulk up Doug Bradley’s iconic Pinhead – this film was green-lit soon after the original had landed in cinemas, and filmmakers hadn’t expected the character to become so iconic – and also mitigate the import of his on-screen demise, the real stars of this film are the mind-blowing practical and visual effects. In a brief cameo, Uncle Frank (Sean Chapman) makes an appearance, but his fate is sealed the moment Julia turns up.

Hellbound is a showcase for some of the most astonishing practical prosthetic and model-work I’ve seen in a film of this vintage. Make-up, rotoscoped backgrounds, set extensions and the visuals demanded by the thoroughly horrific designs of the Cenobites themselves, all smothered in gallons upon gallons of fake blood; Hellbound achieves so much with its limited budget, it staggers me. Sure, some of the sets wobble when leant on, the animated visual effects look decidedly kitschy by today’s standards, and the characters seem fairly one-note, but the visceral nature of much of what transpires, how it gets into your brain and lodges there, is just stunning. The body covering of skinless Julia, for example, looks brilliant even today, covered as it is in a sheen of bloody goop, while Channard’s eventual Cenobite form is gratifyingly horrific and morbidly satisfying. For effects work alone, Hellbound is worth the price of admission. 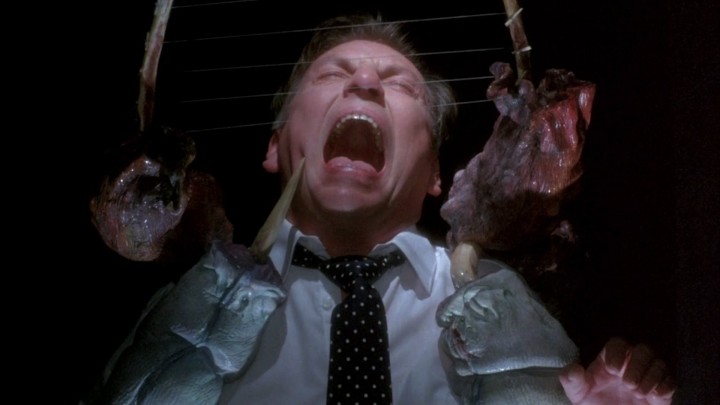 Admittedly, as with most horror films, iconography usurps storytelling cohesion, and Hellbound is definitely an at-times confusing grab bag of ideas that don’t quite gel like they aught. Mostly second-half “Bowels of Hell” stuff, with Kirsty and Tiffany trapped in a labyrinth designed by some acolyte of Escher, in which confusion, hallucination, and sudden plot-twists reveal themselves, become the order of the day. It’s the second act that’s the most powerful visually, but lacks the story and development of the first half’s tension-building body-horror. A tale of two halves, I was more impressed with Hellbound than its predecessor, and can recommend it as a curio for modern horror fans to see how good practical effects in the genre can actually be (in fairness, though, there’s a few effects here that don’t come up to standard…), even if it is, at the end of the day, a schlock-gore fantasy film that has vague overtones to Alex Proyas’ Dark City and Jim Henson’s Labyrinth. Worth a look.