Have a holly, jolly, high Christmas.

Ahh, the old “last hurrah” buddy movie. It’s a Hollywood trope that, perhaps unfortunately, never gets old. The new breed of stoner-films, most of which have starred Seth Rogen in one form or another since Pineapple Express, continues apace with The Night Before, a film about three high-school buddies who continue a soon-t0-be discontinued Christmas Eve tradition of trying to find a secret party somewhere in New York City. In what must surely be revenge for making him act in 50/50, Seth Rogen hooks in Joseph Gordon-Levitt, and current Marvel Falcon Anthony Mackie to appear in a film featuring dick picks, copious drug use, alcohol, Miley Cyrus’ blatant plug for “Wrecking Ball”, and one of the weirdest Michael Shannon appearances in… like, forever. 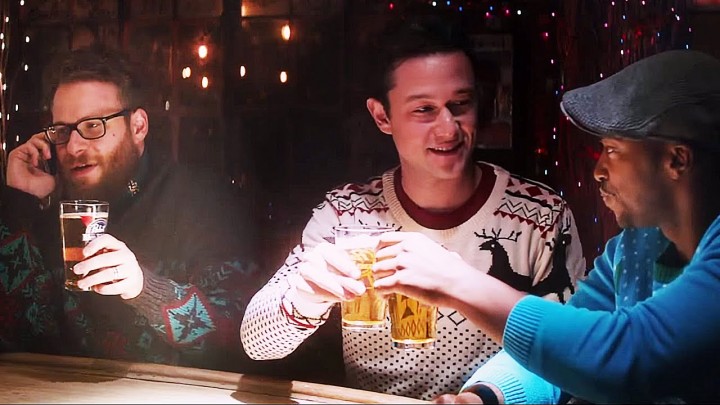 Rogen plays soon-t0-be dad Isaac, married to his hugely pregnant wife Betsy (Jillian Bell), who hooks up with former high-school buds Ethan (Gordon-Levitt) and Chris (Mackie), the latter of whom is a rising NFL superstar, while the former continues to work as a waiter in a dead-end job, in one last Christmas Eve tradition they’ve enjoyed since forever. The aim: to locate the whereabouts of a mysterious New York party – known as the Nutcracker – and gain access, something they’ve never been able to do. With Betsy giving her husband a box of illicit drugs (including cocaine!), the trio head onto the streets of New York in Chris’s sponsored Red Bull Limosuine. After meeting up with local drug dealer Mr Green (Shannon) and scoring a bag of weed, the trio end up at a club, where Ethan runs into former girlfriend Diana (Lizzy Caplan), and her bestie Sarah (Minda Kaling).

The Night Before plays like some second-tier Boys Flick, what with its continual “I’m sooooo high right now” vibe (didn’t that die out in the 00’s?) and predisposition for vulgarity, and although it purports to have an underlying moral message – something about being honest with your wife, or not taking drugs to get ahead in sport, or not being a dick to your relationship when you have a good thang going – don’t be fooled: this film is crass, juvenile, more often puerile, and almost always tasteless. To see a Jew spew inside a Catholic church, just watch this movie. As bad as it sounds for me to say this, I did laugh a lot during my viewing, but in that laughter was the quiet, sobbing sadness of my soul slowly giving itself to Satan. This isn’t a great film, hell it barely passes as a good film, but in keeping with Rogen’s comedic styling and Jonathan “I made 50/50, the cancer comedy, I can do what I like” Levine’s rather low key directing style, The Night Before just comes off as a passable Friday-night beer-n-pizza movie that won’t stick in the memory longer than my last fart. 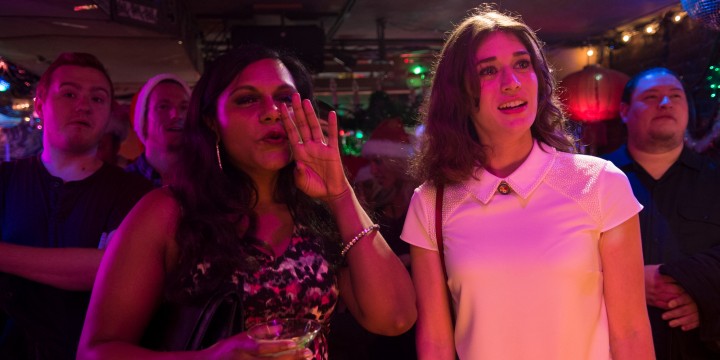 Rogen’s shtick is roaring here, that mumble-verbal comedy style he employs so easily just launching itself from his mouth at every opportunity. Your mileage on that will vary, but if you enjoy Rogen and what he does, this film will pass muster. Also, he spends the vast percentage of his time on-screen pretending to be high/wasted/smashed/tripping so prepare for a lot of Wolf Of Wall Street queludes-style rambling. Funny? In bits. Hilarious? Nah, not so much. Anthony Mackie cultivates more of his wide-shouldered look-at-me screen persona as Chris, a juiced-up NFL star with “a social media game on point” and an easy lay if every there was. Mackie looks like he’s having fun, riffing off Rogen’s relatively introverted mannerisms and attacking the script with ferocity. In contrast, Joseph Gordon-Levitt looks embarrassed to have to appear in this; he looks lost, foundering through the crass dialogue and inane concepts the film comes up with, and he seems to have found a soul-mate in Lizzy Caplan, who must have signed on to this film simply for the paycheck. Caplan looks like she wants to sink through the floor, her acting feels so stilted and forced.

Blessedly, the supporting cast do as much as they can to…er, support the leads, and for the most part do a good job. Michael Shannon’s seedy drug supplier character is shady as f@ck, and creepy as hell, while Mindy Kaling once again supplies the “token ethnic best friend” role to a hot white chick – seriously, when she dies she’ll be buried next to freakin’ Kristen Bell or some crap, just as a big middle finger to nobody – and Jillian Bell, playing Rogen’s wife, actually comes across as normal and reasonable for a film trying desperately to avoid just that. James Frano appears in one of the film’s less amusing gags and flirts with his own possible homosexuality, while Miley Cyrus’ lampooning of her former television status is a momentary glimmer of ironic hope in a sea of scattershot inanity.

The Night Before is basically just another excuse for Rogen and his writers to come up with more stupid scenarios into which they can drag screaming some laughs. The guy’s carved a career out of this stuff, most of which is largely forgettable, because I think he’s better when acting “straight” – see Steve Jobs or 50/50 for that – but I guess this film is what it is. It’s not a great movie, but it contains some laughs if you’re looking for an easy, undemanding night in front of the television. The leads all have nice chemistry, there’s a tokenistic “love story” element that kinda gets lost between Rogen’s drug-induced hallucinations and Mackie’s gangsta speak, and the film ends on an “awwww” note just to complete the trifecta. So sure, it’s okay, but it’s no classic.