In this, the second of our ten-part series at landmark films of the 20th Century, we identify films that set new benchmarks and new ways for film-makers to tell their stories – from editing, to sound, to visual effects, the 100 films we’ve unearthed are considered either classics (or should be) that changed the landscape of film forever. The films listed herein represent annual landmark achievements in cinema – they may not be the “best” films of that year, but they represent a leap forward in cinematic technique that is worth considerable attention.

In the second decade of the 20th Century, the world would be plunged into global conflict, as the German Kaiser sought to take a stranglehold in Europe. Puccini’s greatest opera, Madame Butterfly, would premiere, and the Titanic would sink in the Atlantic, (still) one of the worst maritime disasters in history. The first coast-to-coast telephone call would take place in America, Russia would descend into a bloody revolution, and the pop-up toaster would be invented. Through all this, however, cinema would become a safe haven for both the war-weary and those at peace, a communal artform around which we could all gather, regardless of colour, race or creed.

The first “monster” movie ever made, and based on Mary Shelley’s 1823 novel of the same name, Frankenstein’s monster was played by an uncredited Charles Ogle, with direction on the 16 minute production by J Searle Dawley. As a precursor to modern horror, the salacious elements of the creation of the monster invigorated the film industry and showed that classic literature had a power to captivate even nearly a century after original publication. The film was considered lost until the 1960’s, when a badly damaged copy found its way into the hands of a collector. The film has since undergone major restoration and is now available on hard-to-find DVD.

The first full length Italian feature film, and the first non-erotica film to feature full frontal male nudity, the Italian production of Dante’s Inferno is still considered one of the best adaptations of the author’s work ever made. Filmed over two years at exorbitant cost (in the vicinity of 110,000 lire, an extravagant amount for the day), by three directors – Francesco Bertolini, Adolfo Padavan and Guiseppe de Ligouro – it became a smash hit. It raked in over $2 million in the United States alone, becoming the first of what we now consider to be the modern “blockbuster”. 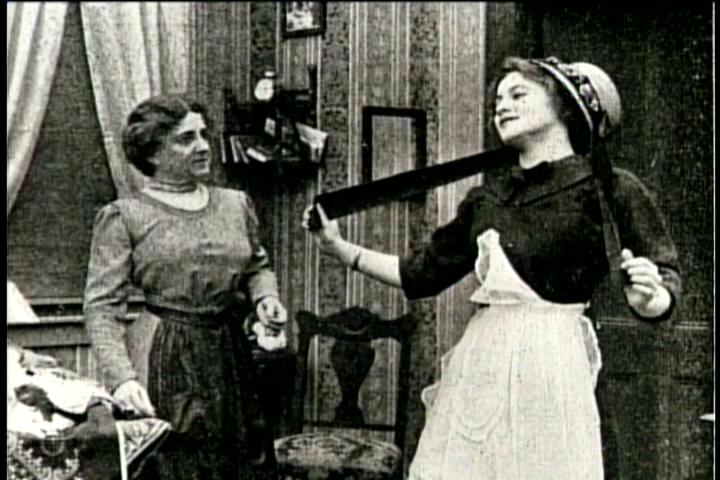 Talk about maudlin. The first film to depict the tragic events of the sinking of the Titanic, then an enormous maritime scandal, debuted to audiences a month to the day (May 12th) after the ship hit the iceberg and sank. Saved From the Titanic was a one-reel, ten minute short film starring an actual Titanic survivor, actress Dorothy Gibson, who obviously felt it important to rush to the set and film her horrifying account. Numerous films would further expand the Titanic’s insta-myth iconography, but Saved From The Titanic, a film now lost following a warehouse fire in which the print was destroyed, remains the first official cinematic document of the tragedy.

Also of note in 1912: Oscar Apfel’s The Passer-by, a film short containing what is considered to be the first ever tracking dolly shot, as well as early film versions of Robin Hood, and Quo Vadis, make appearances. 1912 also saw the début of the first Keystone Kops film, which saw an explosion of comedic vaudeville short films make their way into the cinema landscape.

Of all the major events to occur in 1913’s cinematic year, none resounded with more immediacy than The Adventures of Kathlyn, the first of what would become a tide of “cliff-hanger serial” films, in which the final shot would conclude with the audience not knowing what happens next, resulting in anticipation for the next episode. Serial film of this nature would become Hollywood’s bread-and-butter in the decades to follow, but The Adventures of Kathlyn was the first to present the concept with any solidity. A novel of the film was also published concurrently with the film’s theatrical debut, and featured a number of published stills taken from the movie. Can anybody say “merchandise”?

Also in 1913: Charlie Chaplin signs a contract in December to commence making short films at Keystone Studios; the earliest surviving film featuring black actors, Bert Williams Lime Kiln Club Field Day, starring the first African American Broadway star in Bert Williams, made its début (the film is now partially lost); Thomas Edison announced his new sound film technology which gave birth to the concept of the “talkie” – synchronised sound played with the film allowed natural sounds to be heard by the audience. Edison’s invention was abandoned only a few years later following continual synchronisation and playback problems, but it wouldn’t be the last time audiences heard sound coming from a film on the big screen. 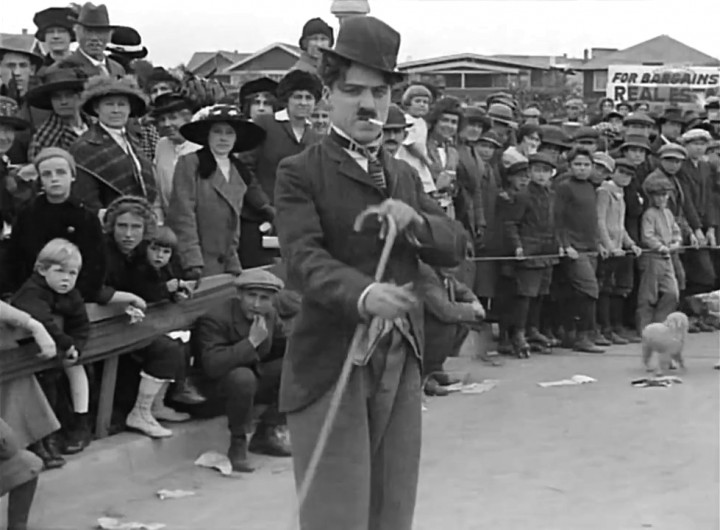 Following his signing to Keystone Studios, Charlie Chaplin first appeared as a “Swindler” in the 1914 film Making A Living, however later that year would début the Tramp character in Kid Auto Races At Venice, to considerable popularity. Chaplin would make 35 short films, most of which involved the Tramp, for Keystone in 1914 alone. Inevitably, he would become Hollywood’s first megastar.

American director DW Griffiths releases his seminal masterpiece, The Birth of A Nation. At two hours in length (over three in it’s re-release length!) it was the most ambitious film yet produced anywhere in the world, and brought to the fore Griffiths’ considerable range and skill behind the camera. Use of cross-cutting, panning, colour tinting and many other which still exist in modern film-making styles, The Birth Of A Nation retold a (fairly biased) account of how America came into being during the (relatively recent) Civil War, specifically using imagery of the Ku Klux Klan and (to modern eyes, at least) racial stereotypes in doing so. Met with a storm of controversy by activist groups on release, and featuring an abhorrent amount of racism and classism depicted within it, the film has nevertheless become a cultural monument to an of-the-period piece of propaganda blockbuster cinema. It became the first film to be screened at the White House (President Woodrow Wilson described it as “painting history with lightning”… if that’s good or bad I leave to you) and became the first film in history to gross over a million dollars. 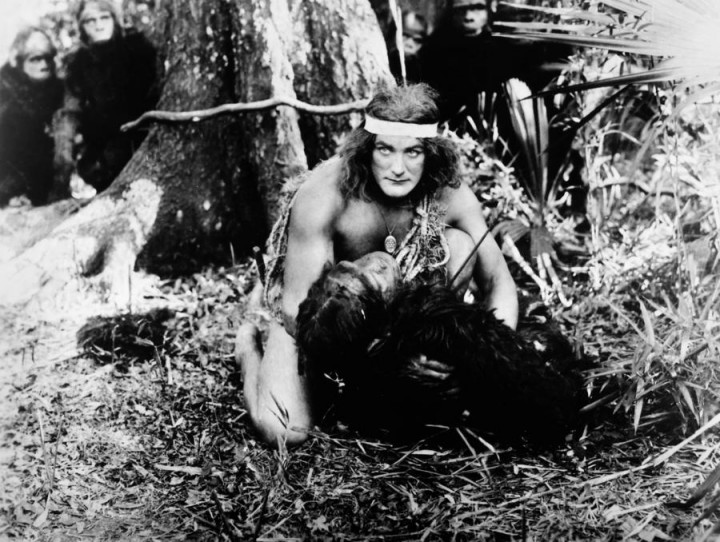 Also of note in 1915: the first example of 3D film was presented in New York City, with the footage of simple documentary-esque material requiring the red-green glasses to be worn to see it. The Technicolor film company would also be founded in 1915.

A Night of Horror was a German-made silent film featuring the first screen depiction of vampires. Although overshadowed (ha!) some years later by Nosferatu and the popularising of the Dracula legend, A Night Of Horror is a major milestone in the annals of cinematic horror.

Also in 1916: DW Griffiths’ follow-up to The Birth of A Nation, called Intolerance, débuts to lukewarm box-office against an estimated $2m budget, and quickly becomes a commercial failure. Also, the famous Paramount Pictures logo begins appearing at the start of many films.

The Butcher Boy débuts, the first on-screen pairing of Fatty Arbuckle and Buster Keaton, who stand alongside Charlie Chaplin as some of Hollywood’s earliest comedy superstars. Team-up comedy would become a stock in trade for Hollywood productions – everyone from the Three Stooges, Laurel and Hardy, and even modern day equivalents such as Michael Bay and His Explosions giving audiences a good chuckle – and both Keaton and Arbuckle would appear in numerous films together over the years. 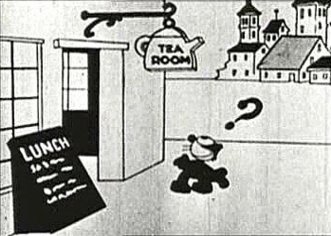 The first feature film to depict Edgar Rice Burrough’s iconic jungle swinger, Tarzan, arrived; featuring Elmo Lincoln as an adult Tarzan, the film set in motion and entire franchise based on that character – a tradition which continues to this day. Shot by Scott Sidney and running some 120 minutes, the remaining elements of the film have it sitting at a smidge over 70 minutes, and according to records was a heavily censored film at the time, thanks to depictions of violence and sexuality. Tarzan Of The Apes was received well, and is considered by many fans as the most faithful to Burrough’s vision of the character to this day.

The early days of cartoon animation were still wet behind the ears when Felix the Cat made his début in 1919, in Feline Follies, an animated short which was followed the same year by Musical Mews. Establishing a precedent for pre-film entertainment (most animated shorts were featured prior to the main feature, before trailers – which began as after-film entertainment – moved into the slot) Felix The Cat became a household name of the same acclaim as Mickey and Bugs would decades down the line.

In Landmark Films Of The 20th Century