2015’s other true-crime film, Legend, follows hot on the heels of Johnny Depp’s Black Mass, and comes out swinging. Featuring a superb turn by Tom Hardy as both Ronnie and Reggie Kray, who ruled East London in the 50’s and 60’s, Legend should not be confused with the Ridley Scott film of the same name, which stars a less-than-stellar turn by Tom Cruise as a dude who isn’t a criminal. Directed by LA Confidential screenwriter and A Knights Tale helmer Brian Helgeland, Legend’s gritty, passionately rigid portrayal of a mid-century London and the seedy underbelly of the city’s crime-life is on-point and solidly mounted. 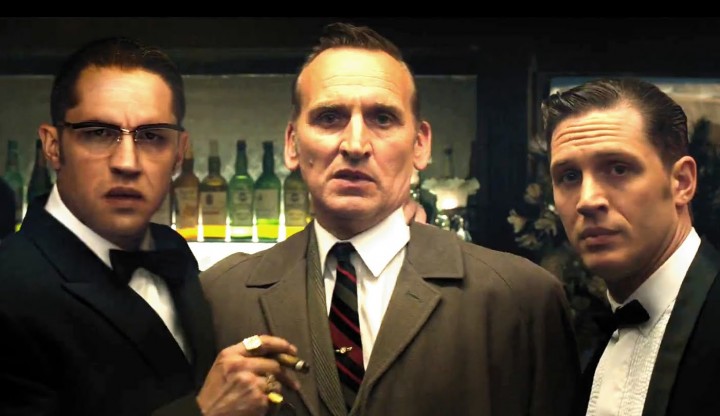 Legend is, at times, hilarious. Not in that stupid, American slapstick kinda way, but in the cool, English, Guy-Ritchie-Lock-Stock way that makes being bad seem oh so good. Hardy is terrific as real-life twins Robbie and Reggie Kray, who built a criminal empire in London based on fear, intimidation, and of course, celebrity. Corruption and thuggery was rife through London (probably still is, let’s face it) and the Krays were the nexus around which it all swirled. Reggie is the “smart” one, the businessman and driving force behind the empire they created, while Ronnie was the psychotic, openly gay, violence-prone sibling who threatened to topple it. Hardy’s chameleonic turn in both roles, the old “same actor on the screen in two parts” routine, is terrific, personifying the differences in the two men with ease and conviction. Hardy looks to be having a blast in this film, providing both calm, humour and menace to both brothers as they scour London of any and all competition.

Helgeland directs his own screenplay with an ochre-coloured love of the period, threading the brothers’ activities in their “business” through Reggie’s love affair with Frances Shea (Aussie actress Emily Browning – Sucker Punch), and the conflict between them as she starts to understand that her man’s loyalty to his insane brother will drive a wedge between them. Legend is a tragic story in that sense, as Frances’ life is ruined (she committed suicide 2 years after marrying Reggie) before it really begins. While Hardy’s masculine performances solidify through the film’s opening act, it’s Browning’s performance that anchors the film’s more melancholy turn in the final half. Although it would have been easier to maybe make a film filled with the Kray’s misdemeanours, and eschew the “romantic” angle of making these men somehow likeable thugs, Helgeland gives us a sense of Reggie’s torment, and it grounds the film in a sadness that punches hard against the generally guffaw-worthy antics of the brothers’ early years.

The film is populated by some top-tier British talent. Former Doctor Who star Christopher Eccleston plays Scotland Yard Detective Leonard “Nipper” Read, in charge of the investigation to bring the Krays down, Kingsman star Taron Edgerton as one of Ronnie’s “lover boys”, and David Thewlis, as Leslie Payne, the brothers’ business manager, have fun roles, while Avengers star Paul Bettany, Merlin star Colin Morgan, and Kevin McNally, who appeared alongside Johnny Depp in the Pirates Of The Caribbean movies have smaller bit-parts to catch for the keen-eyed. 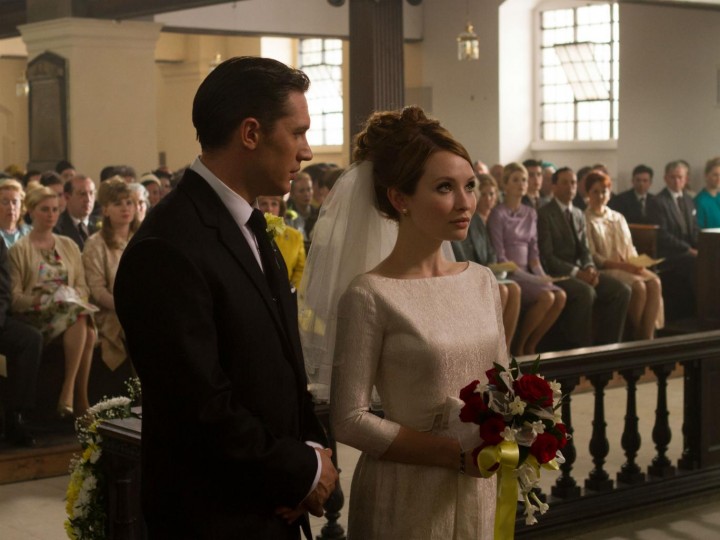 Part of the fun I had with Legend was in spending time with a couple of outright reprobates – their trainwreck life was always going to end badly (both ended up in prison for substantial time, I think that’s hardly a spoiler) but the journey is worth a look. Exactly why Helgeland felt the need to humanise these men, I’m not sure the film gets the point out very well, and aside from its debauched violence and manic energy, the film dwells in the implacably futile future both brothers have to the point it becomes a bit of a downer – perhaps it’s trying to make the point that crime doesn’t pay? Either way, it’s fun watching Hardy chew his scenes as both characters, although as Ronnie he gets to have that Mad Max nutball wild-eyed stuff down pat, and as Reggie he imbues the role with a pathos, but it’s more a pastiche of gangland iconism, rather than a direct biopicture. There’s never a sense of raw, urban grit here, of the kind we saw in Black Mass (for example), but rather a mythologised, almost pedestal-placement representation of a couple of good-ol-boys who got caught out, is all.

Does this make Legend any less a film for what it doesn’t do than what it does? Not at all: I thought Legend was terrific, I chuckled, was horrified, and was moved in equal moments. Hardy’s performance anchors the film in a way I have come to expect – did you even see that movie where he was in a car and that was it? Or Fury Road, where he basically said three complete sentences and that was his entire character? – and Helgeland’s terrific, unblinking film-making style give both energy and strength to a story that, for its violence and engaging wry humour, harbours a fragility of familial loyalty to which I guess we can all invest emotionally. Although I think Helgeland kinda missed the mark in making his point on the Reggie/Frances relationship, which spirals into a love-hate, drug-dependent death spiral, Legend is compelling and exciting, magnificent and brutal all in the same sweep of cinema.