Remember that hideous Bughuul monster from the first Sinister movie? No? That’s okay, Sinister 2 does, and it’s ready to throw everything but the kitchen sink at you in order to jog your memory. Although a sequel by name, and featuring the bump-to-lead role for James Ransone’s unnamed Deputy character (in the online world he’s known as Deputy So & So…. ugh), Sinister 2 doesn’t do as much intellectually for the franchise, instead just offering up a ramped-up reprise of the first film’s creepy “home movie” motif. Asking a horror film to smarten up for its audience is a little like asking porn to give the pool cleaner a backstory, and I know most genre sequels are content to offer naught but “variation on a theme”, but I had hoped for more that the film offer up, or at least more depth to the internal mythology of the concept rather than just more jump scares and creepy foley effects. 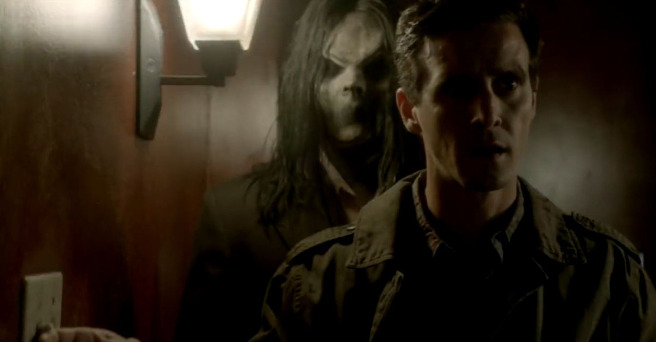 The Deputy (Ransone) has now left the force (making him an Ex-Deputy, I guess), and travels the country looking for homes in which encounters with Bughuul, the entity from the fiorst film, have occurred. Finding them, he burns them, preventing the return of the entity to that place. However, he stumbles across one home where a woman, Courtney Collins (Sonnamon) lives with her twin boys, Dylan (Robert Daniel Sloan) and Zach (Dartanian Sloan), who have hunkered down to avoid being found by her abusive ex-husband, Clint (Lea Coco). Unfortunately, also on the rural proerty is an old church, inside which horrifying acts of evil occurred; the gateway to Bughuul is opened again, with demonic children and an evil presence making contact with Dylan through nightmares, in order to drag one of the boys into hell.

If you’re after an undemanding time of blood-curdling chills and some skin-prickle creep, Sinister 2 will deliver more often than it stumbles. It’s not a perfect film, and it’s not a perfect sequel, for in trying to add width to the Bughuul mythology it’s a valiant effort, if only it wasn’t so hell-bent on simply repeating the one key element which made the original film work so well. Home movie hauntings do okay in small doses – I find this kind of thrill evaporates quickly, like found-footage films – but Sinister 2 ups the dose of the original by an order of magnitude, throwing in a new roster of characters (and one returning one) for new supernatural chills to occur. This isn’t to say it doesn’t work, not at all, it just doesn’t work as well now that we know what to expect. You’re waiting for the jump moment, expecting a scare to come, and they do; a good horror film should surprise you, and with a few exceptions, Sinister 2 did not. 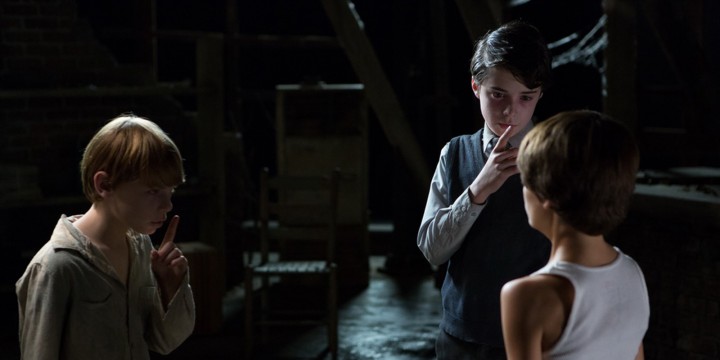 Am I being too harsh on a horror sequel to adequately surprise me? After all, every sequel known to man works of the simple premise that you take the concept of the original film and ratchet it up to “big, bigger, biggest” levels of overkill, so expecting Sinister 2 do anything else is ill-advised. The film’s tone and sense of visual menace is top-notch, and the acting performances are pretty good considering the film is largely carried by two inexperienced twin actors, but the pall of “been here, done that” lingers more than it should. Co-scripted by Sinister director Scott Derrickson and Ain’t It Cool News’ contributor Massawyrm, who goes by the human name C Robert Cargill, Sinister 2 hits all the right beats to give the story some eerie jabs at audiences expectations, riffing on supernatural themes and typically crash-bang modern horror film-making tropes.

In other words, lots of ghostly reflections, corner-of-the-eye skitters, jump-zoom character movement and clickety-clickety sound design. It’s become an archetype of modern horror films to simply pummel the audience with constant jump moments and assaultive surround sound, eschewing characterisation for screams and cheap thrills. At times this kind of thing can work, but it’s become a fallback for directors handing an otherwise good premise without the skill to adequately generate tension internally through either the story or the characters. Resorting to cheap grab-scares has become the gag, rather than something earned via storytelling prowess. 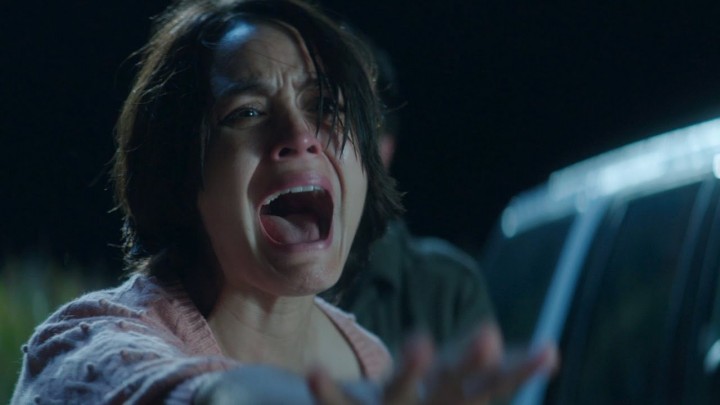 Sinister 2 works visually, no doubt. Shannon Sossamon (A Knights Tale) appears suitably frumpy as the mother of twins Zach and Dylan, both of whom are susceptible to the Bughuul’s evil manifestations. Sossamon does her job in a role demanding plenty of an actress of her talent, ushering her on-screen sons through the pitfalls of horror acting with as much depth as she can draw from what is plainly a generic character. James Ransone – looking remarkable similar to Christian Bale at times, I might add – is steadfast as the ex-Deputy, with the script trying to give his character a vague Exorcist-flavoured supernatural vigilante of sorts. Ransone provides a link to the previous film’s aesthetic of gritty, dim-lit horror, and he’s working against a ubiquitous style-over-substance director, more’s the pity. The spooky children of the film, Milo (Lucas Jade Zumann), Emma (Laila Haley) and Ted (Jaden Klein) elicit some chills, but kids-as-spooky is old hat now, and I found it more laughable than scary.

I guess it’s a result of a generation of kids raised on three minute pop songs and 24-hour news cycles, who’ve become accustomed to assaultive entertainment for their insta-thrills. The demographic for this film is obviously not the kind of film fan who appreciates good, slow-build terror – see It Follows for an example of that – and instead need constant jolting from their cellphone screens in order to appreciate anything at all. That’s what kind of film this is.

I won’t deny it: Sinister 2 sucked me into its vortex of terror, and on more than one occasion I had pause to consider turning on the lights. Its atmospheric visual style conjures up all manner of creepy-crawly subconscious demons, leaving the in-your-face spooks to simply jump out and make the most of the tension brought on by audience awareness of the genre. Does it succeed in its mission to scare and terrorize? Sure does. Still doesn’t make it a great film, merely a good one. Were it not for the almost constant pound-pound of menace throughout, the unrelenting feeling of something coming out the shadows at any moment, the distracting amount of “expectation” something’s gonna jump out and scare you, Sinister 2’s malevolent, pressure-cooker environment might have been something truly terrifying instead of something generic.