Like many Gen X-ers, I have fond memories of my first time watching ET. The back row of an old-style cinema, back in about 1985 (I think I caught the re-release version) with my dad, howling my eyes out when ET leaves at the end. I don’t remember much about that viewing (I would have been 10 years old) but I remember that vividly. Strangely, so does my dad. ET became a phenomenon at the box office, a genuine crowd-pleasing juggernaut, remaining the highest world-wide box-office earner from its début until it was toppled in 1993, by another Spielberg film, Jurassic Park. Nominated for a clutch of Academy Awards, including Best Picture, and winning four in the technical departments, ET is considered Spielberg’s most personal, heartfelt film opus, and to this day remains a classic for young and old alike. 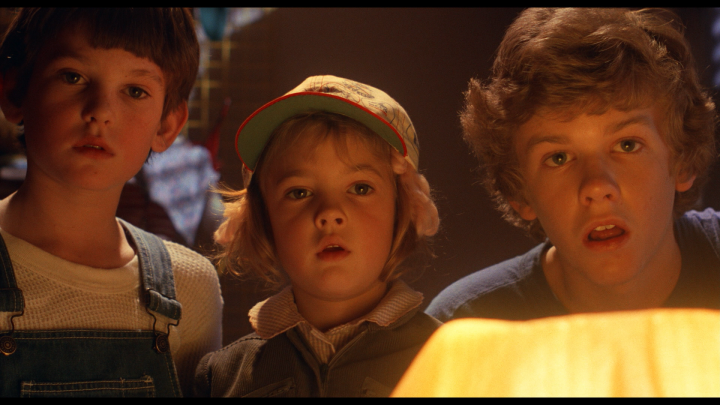 Elliot (Henry Thomas) lives with his mother (Dee Wallace), older brother Michael (Robert MacNaughton) and younger sister Gertie (Drew Barrymore) in suburban America; one night, an alien creature is abandoned on Earth after his ship leaves suddenly, and eventually he makes a home inside the garden shed at the rear of Elliot’s house. Befriending the alien and keeping him a secret from the pervasive presence of a lurking Government agent (Peter Coyote), Elliot balances the wonder of understanding ET’s abilities with the strong friendship the pair share. Eventually, however, ET starts to get sick due to viruses in the Earth’s atmosphere, and the tiny alien must send a message back to his own kind for them to retrieve him.

ET contains almost the entire range of Spielbergisms: parents divorced, estranged, or otherwise apart, childhood growing pains, and authority figures. It’s never explained where Elliot’s father is, although one might assume he’s left them for some reason (it explains some of the three kids’ acting out), and Elliot is struggling to find his place in both his family unit and in the wider world. The film is primarily low-slung visually, with the camera constantly at hip or shoulder height to Elliot (Henry Thomas wasn’t a tall kid, that’s for sure, but he was gangly), and portrayal of adults was usually voice or below-the-neck only, with Dee Wallace the only lead adult character whose face is shown for the majority of the movie. Peter Coyote is only revealed late in the film, as the government agent set on capturing ET; the entire film is about the kids, and their relationship with each other and ET. This disarming style employed by Spielberg gives the film a fantastical, ingenuous tangibility, aimed directly at the hearts and minds of the young audience the film is made for. 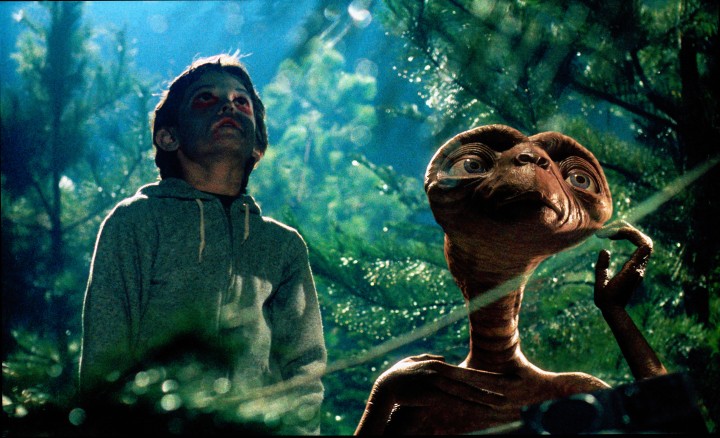 ET’s core narrative is as old as time itself: can you keep a secret? Elliot’s desire to protect ET from those he perceives as wanting to do the creature harm, inadvertently brings about ET’s near fatal collapse in the film’s climactic moments. The idea that kids can remain autonomous from adult authority figures, such as teachers, parents, and even the government, is a strong one, rooted in a sense of self-identity and personal growth, and Spielberg runs with it throughout much of the film’s narrative. Unlike many “kids films”, where adults are portrayed as imbecilic or easily deceived, ET doesn’t pander to its audience in this manner and keeps the stakes for Elliot and ET high, which strengthens the end result when Elliot and ET must eventually part.

The film’s big selling points is, naturally, ET himself. A brown puppet with an elongated neck and straw-like arms, ET’s huge eyes and emotive, evocative performance is derived from people off screen pulling the cables to drive the character, and while you’d imagine today would find such a character almost entirely CG, the limits of 1980’s technology means ET exists on-set, in the world, in front of the camera. He’s tangible, he breathes and falls, he sighs and squeals; he’s a living creature, so realistic is his performance within the film’s framework. ET ain’t the prettiest alien ever devised, nor is he the most active or the most physically capable, but perhaps because of his innate unattractiveness people find him endearing. His mumbling and muttering, particularly the iconic “ET phone home” line, is almost primal to a degree, even though these creatures are obviously hyper-intelligent if they drove a spacecraft across the galaxy to our world. Having said that, if ET’s species was so smart, how come they f@cking left him behind in the first place? Douchebags, all of them. 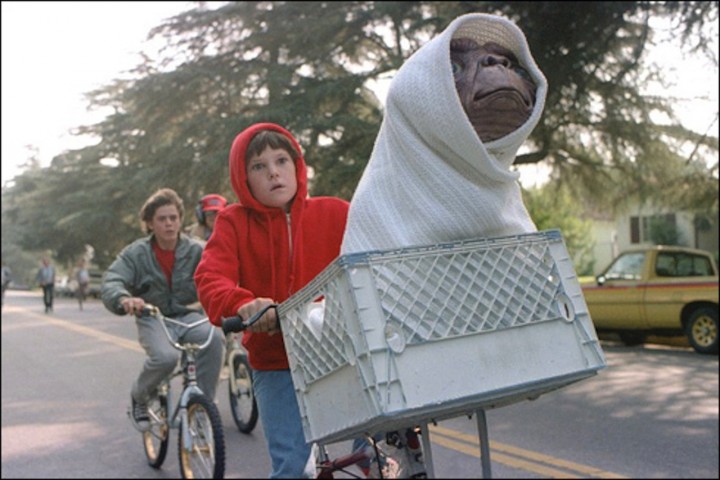 As far as performances go, the one delivered by Henry Thomas here is un-frickin’-believable. The dude is amazing as Elliot, with a child-actor delivery that is so unlike his contemporaries it’s amazing. Against ET Thomas shines, the wonder and love in his expressions as he laughs, cries and screams with the creature and it’s through this believable acting that ET himself comes further to life in our eyes. Drew Barrymore’s Gertie is sweet as apple pie, while Robert MacNaughton’s Michael is suitably annoyed with his younger sibling, while at the same time amazed by ET’s presence. Dee Wallace and Peter Coyote do well with marginal roles, and if you look quickly you can spot future Baywatch and Under Siege babe Erika Eleniak as the young girl Elliot kisses at school.

ET: The Extra-Terrestrial is definitive Spielberg – the backstory to the film is that it represented a childhood fantasy of handling the director’s real-life issues with his parents, who divorced when he was young. Growing up without a father, Spielberg supposedly imagined an invisible alien friend to comfort him, and it’s through this that ET came to be. The film is a classic, rightly so, thanks to a gleeful childishness of the director, John Williams’ wonderful orchestral score, and some high calibre performances by a cast of young actors opposite a shit-coloured alien. This one is essential viewing for everyone.