Angmar would not be pleased.

Pitying Vin Diesel is almost too easy. The action star, famous mainly as the late Paul Walker’s on-screen partner in the Fast & Furious films, can’t seem to catch a break with an alternate franchise. With xXx seemingly on the outer (leastways, it’s been fifteen years or so since he last played Xander Drax), the Riddick films not quite living up to Pitch Black’s high-water mark of excellence, and some awful script choices between the Furious films, Diesel tries his hand at supernatural tomfoolery as a way of establishing another ongoing series of films; The Last Witch Hunter is an attempt to solidify Diesel as a saleable brand outside of fast cars and hot women. Does it work? Barely, although the film’s incomprehensible exposition sequences and nonsensical jumble of ideas make for tough going, bordering on impossible. 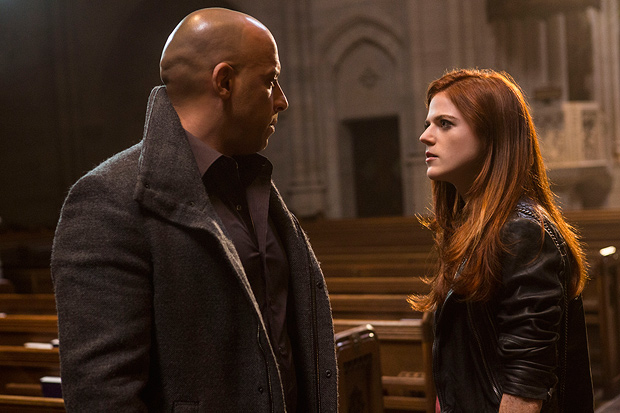 Diesel plays Kaulder, an immortal member of a secret organisation known as The Axe And The Cross, hunting down witches who break the treaty not to interfere with, or harm, humans. Having lived many hundreds of years, Kaulder’s human “handler”, Dolan 36 (Michael Caine) is tasked with keeping a record of all the immortal’s achievements; upon his retirement, 36 is supposedly killed by the dark necromancer forces of the Witch Queen (Julie Engelbrecht), and the 37th Dolan is assigned (Elijah Wood), and both begin the hunt for the Witch Queen’s master-plan. Along the way, Kaulder meets a young witch, Chloe (Game of Thrones star Rose Leslie), to get a spell which will allow him to remember his own death – a message from 36 sets him on the path to identifying those he needs to kill.

The Last Witch Hunter is the kind of film that closely resembles a video game nobody ever made. Although stylish, and made with attention to detail, the film is utterly betwixt with its own cleverness, wrapped up in a universe mixing Witches and “dark magic” underneath the human world similarly to Harry Potter’s world. Director Breck Esiner, who gave us the haphazard Sahara and the compelling The Crazies remake, Witch Hunter’s leanings towards franchise world-building mitigate much of the soul of the film: in its hurry to establish the film’s universe and make sure we can all understand what’s going on, Diesel’s immortal tough guy character is bereft of his humanity – no matter how many flashbacks we get to his corpsicle family – and the film suffers an dire lack of empathy. The stakes, given to us as impressively high, matter nought in the face of Diesel’s rumbling, menacing delivery and overblown action masculinity: due to his impressive ability to never die, and to heal almost instantly from any injury, we never care about Kaulder’s fate beyond the immediate, and it robs the film of a load of tension.

Where Kaulder strides through the film like a monolith of witch-hunting arrogance, The Last Witch Hunter is an all-exposition affair that spends more time setting up the story than it does delivering on it. Diesel portrays the character with typically upright moral superiority – Kaulder exists as a weapon to destroy witches, and the inner darkness of his tragic origin resonates very subliminally throughout Diesel’s caricature of a “tortured soul” appraisal. But it never rings true beyond simplistic B-movie trash, a pulpy band of ne’er-do-well characters together through mutual story requirements, with the film’s PG13 violence and overwritten plot stings nailing the lid on this coffin of a film most firmly shut.

A victim of overly complicated plotting, The Last Witch Hunter boasts a solid supporting cast nonetheless: Michael Caine’s lengthy cameo, together with Elijah Wood’s simpering confusion and Rose Leslie’s rebelliously cool Chloe all give the film a sense of rigid structure in the face of an overwhelming abuse of style. Leslie particularly handles Diesel’s brooding hulk well, delivering a performance well in advance of what this film probably deserves. 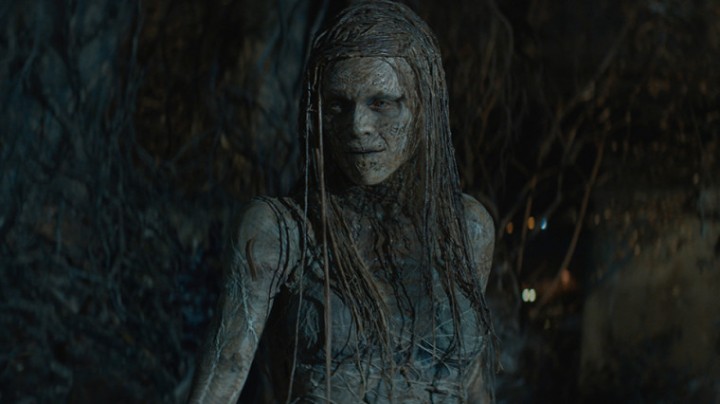 Poor Breck Eisner directs this thing with the slick, modernist approach of a man accustomed to colour grading and editorial manipulation of the story. The film’s roughshod approach to framing, to character beats, and to building suspense, offer little respite from both a pulsating visual tone and a thunderous soundtrack accompaniment – it’s as if the film was edited to the music, rather than the other way around, sometimes. Watching solid actors mix it up against a grab-bag of supernatural visual effects is a little frustrating, buried as they are beneath the onslaught of sound design and digital trickery, but for the most part there’s a resolute commitment by both cast and director to deliver an entertainment of some kind, regardless of the quality.

At a B-movie level there’s plenty to seek out in The Last Witch Hunter’s iconography and bastardisation of medieval witch mythology. It’s visually rich, if messy, and the internal universe of the film does fit the kind of franchise saga I could see working well if done right. In spite of Eisner’s hack direction and Diesel’s utter lack of charisma in the role, and up against a world now attuned to adult scripted fiction such as True Blood, The Walking Dead and Game Of Thrones, The Last Witch Hunter’s derivative themes and generic mythology make for a frustratingly anemic journey into the bowels of an underworld beneath our feet.

The Last Witch Hunter will look dynamite on BluRay and in every iteration of Ultra HD to come along, but as a narrative it lacks cohesion and bogs itself down in wordy, nonsensical doublespeak that crucifies intellect for character development, while the action sequences are typically over-edited and poorly filmed. Diesel’s attempt to kick off another franchise is workmanlike but, ultimately, devoid of the passion the man so obviously tried to give it.