The journey of The Hateful Eight simply to make it to the screen is one worthy of a Tarantino film itself. Originally penned in 2013, the script leaked online in January of 2014, after which Tarantino – perhaps in a fit of pique – stated he’d never make the film due to this fact. Following a brief period in which he held true to his word, Tarantino eventually retracted his assertion and, following a number of rewrites, and a live reading of the script at a Los Angeles theatre, The Hateful Eight made its way before cameras in December of that same year. Notably, the film is the first since Ron Howard’s Far & Away, in 1992, to make full use of filming in 70mm, with an ultra-wide aspect ratio most often associated with biblical or action epics from the 50’s and 60’s, and was edited by Tarantino to exist in both a “roadshow” version, complete with overture and intermission, and a general release version, which runs some 20 minutes shorter. This review is based on the general release version. 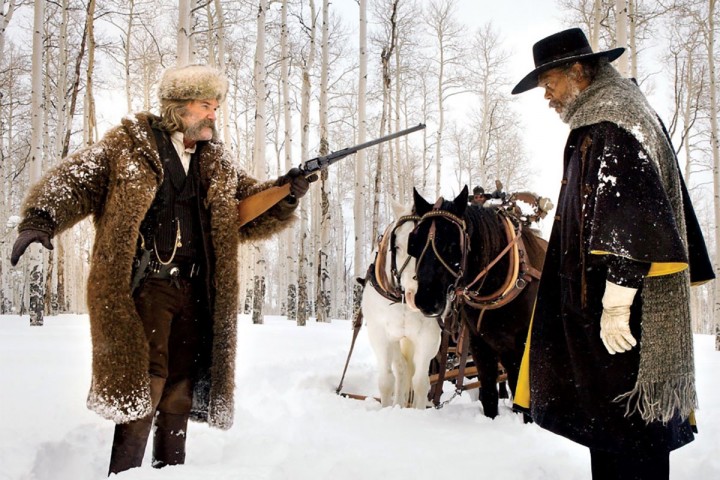 Wyoming, some time after the American Civil War: a stagecoach transports John “The Hangman” Ruth (Kurt Russell, sporting the same beard/moustache combo he had in Bone Tomahawk) and Daisy Domergue (Jennifer Jason Leigh) towards the town of Red Rock, where the latter is to be hanged. Along the way, John encounters Major Marquis Warren (Samuel L Jackson), a former soldier now bounty hunter, seeking a ride to Red Rock, as well as Chris Mannix (Walton Goggins), a man claiming to be Red Rock’s next Sheriff. Arriving at the snowbound shelter of Minnie’s Haberdashery, a cabin high atop the mountains, the quartet meet fellow travellers Oswaldo Mobrey (Tim Roth), a man claiming to be the official Hangman sent to Red Rock to carry out Daisy’s execution, Joe Gage (Michael Madsen) who seems simply to seek the quiet life, and General Sandy Smithers (Bruce Dern), a former Civil War officer now returning to Red Rock to mourn the death of his son. Stagecoach driver OB (James Parks), and Mexican porter Bob (Demian Bichir), who claims Minnie has left to visit her mother on the other side of the mountain and put him in charge of the establishment, also remain stuck inside the cabin whilst the fierce blizzard blows around outside. What each person knows, though, is that not all of them will make it to the next day, as they all come to Minnie’s Haberdashery with motivations of their own.

Several words come to mind when reflecting on Tarantino’s grand pastiche of the Western: bloated, talky, bloody. At nearly three hours, Tarantino’s lavishly glacial reverence for both the medium and the genre run afoul of a few too many conversational set-pieces that, if you think on them, could easily have been swept aside in favour of a more direct, tautly wound dramatic thriller, but props to Quentin for never being one to make the film we think he should make. Arguments to the contrary, The Hateful Eight is exactly the film he wanted to make, and critiqued in its full, glorious scope, it is both a magnificent opus and a tedious, flirtatious bore. 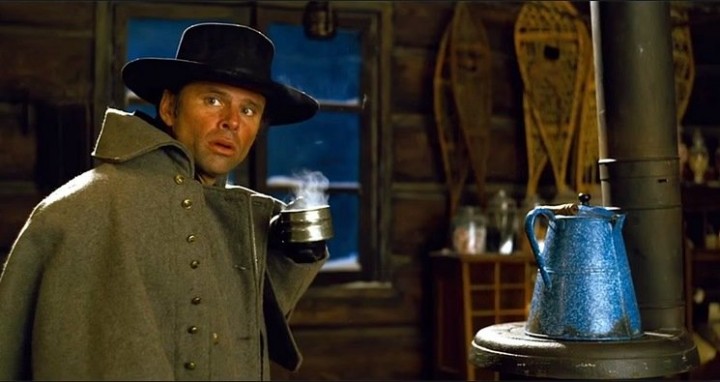 The film’s conceit is essentially an Agatha Christie-esque one-room mystery, a set-bound cast spending time conversing as Tarantino’s onion-peeled premise begins to take form. Given the production value of shooting a film in 70mm it seems a little counter-intuitive to confine such spectacular film-making technology to what amounts to a two and a half hour interior film, but it is what it is, I guess. Had Tarantino filmed this in 35mm the result would have been much the same. Instead of vast glorious vistas of Wyoming landscape (of which there are a few, bookending this bloodbath as John Ruth’s stagecoach tracks through the white-out blizzard) we’re drawn into the character-driven necessity of the director’s penchant for casual racism and slurs, not to mention outright misogyny, as Ruth and Daisy land feet-first in the inadequately named Minnie’s Haberdashery.

At first blush, Hateful Eight has a lot going for it – a tremendous cast, particularly Jackson and Goggins, who provide a lot of the conflict initially given they both fought on opposing sides during the (relative) recent Civil War, as well as stunning production value and what has to be one of the meatiest character screenplays written this year. Mix that with a brooding, terrific score by the legendary Ennio Morricone, and you have the jigsaw pieces for one hell of a puzzle to solve.

The trouble is, Tarantino’s so preoccupied with his own self-indulgence, so referential to meta – check the casting of the utterly anachronistic Zoe Bell (Deathproof), whose New Zealand accent within this genre might as well scream simply “stunt casting” over and over again (see what I did there?) for all it improves the film – he loses focus on what makes these kinds of films work so well in the first place. It’s touches like Bell’s casting that belittle Tarantino’s creative choices, although given all he’s accomplished perhaps some latitude to hubris is allowed, in retrospect. Still, you get the sense that for all his wing-stretching, all his considerable talent and all the cinematic armament at his disposal, often his films come across as a child messing about in a sandbox he has no real idea about. The Hateful Eight is Tarantino’s most garbled film since Jackie Brown, a film I still consider his least likeable. 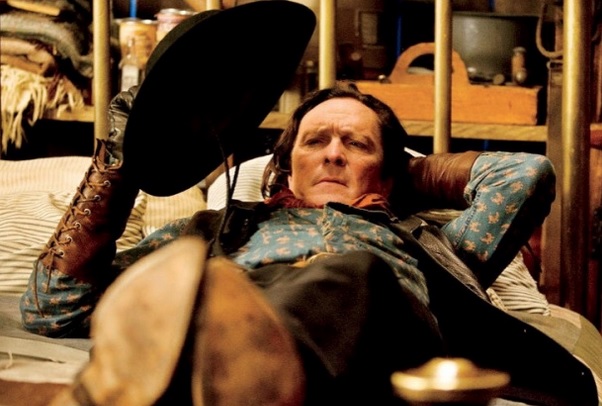 Look, I get that the film is designed to rekindle our love of the great American Western, or perhaps echo Django’s troubling mirror-reflection onto the country’s violent, blood-soaked past, but the constant combining of classic Western iconography with the gleeful pulp-fiction bloodlust Tarantino seems incapable of restraining make The Hateful Eight more vacuous and inwardly indulgent than in any shape compelling. Take the genre’s most recent touchstone entry, Clint Eastwood’s Unforgiven, a film to which Tarantino possibly veered when scripting this one; Eastwood, as the reluctant killer, out for revenge not against Gene Hackman’s odious villain but his own past life, re-established a sense of realistic emotional impact in a type of film often utterly lacking it. Suddenly, the Western was not purely black-and-white, but shades of grey – a fact we’ve seen in many a film from the genre since. Tarantino’s work here skirts this moral intransigence but eventually settles on just having everyone kill everyone else, compunction manufactured to elicit cheap shock and awe from the audience.

Part of the fun of Hateful Eight is Tarantino’s dialogue, and as with all his films it positively sparkles here. Delivered by rock-star acting performances, The Hateful Eight’s duplicitous scripting ranges from the scintillating (Bruce Dern’s epithet-strewn diatribe against Jackson’s former military serviceman) to the muscular (most of Kurt Russell’s scenery-chewing cowboy utterances) to the jocular (Walton Goggins, you goddam superstar, you finally won me over!) and the outright hammy (Jennifer Jason Leigh). But the film primarily belongs to Jackson’s Marquis Warren, whose Poirot-esque unravelling of the film’s key plot device – the identity of Daisy and her accomplices  – seems a tad too overthought for somebody of his abilities and intellect. Of course, there’s also the constant repetition of the word “nigger” within the film, an epithet describing Warren used by virtually every single character on the screen aside from Jackson. It’s a word used so often it becomes almost…er, white noise against the backdrop of so much racism and sexism; you’d never accuse Tarantino of whitewashing his script to suit an audience, although if I had a criticism of it it’s that it does become tiresome hearing characters refer to Jackson as a “nigger” the entire film. 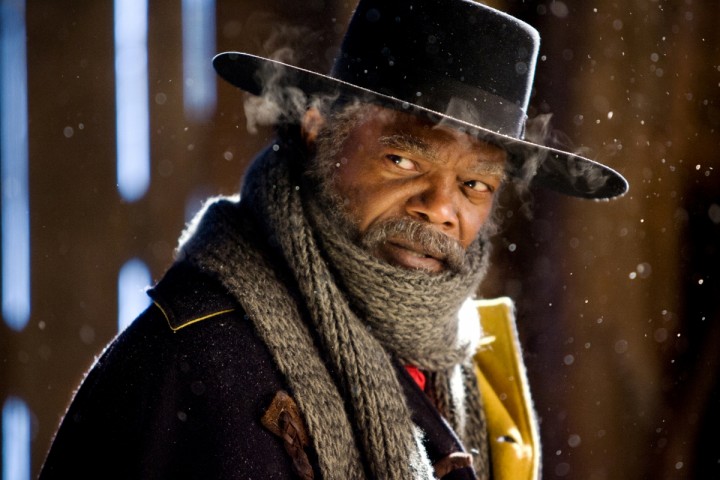 But yes, Hateful Eight screams of Tarantino’s magniloquent writing, and most of his scenes feature that easily identifiable double-speak of characters repeating words or lines to somehow construct inherent tension in a scene. It’s a technique used often by film-makers to make a point, but Tarantino uses it as a way of protracting his scenes and lengthening his films. The intractable Kurt Russell’s performance is the flaw in my argument, but everyone else at some point engages in this manner of speaking. Also, too, does Tarantino use the “storytelling” technique to elicit emotion in a scene – he’ll have a character recount an incident (often one which we never see, allowing the dialogue itself to worm into our brains and heighten an emotion) that is designed to shock or somehow move the story or character forward, but strangely The Hateful Eight never accomplishes much when this device is used.

I use the words “flirtatious bore” with more tenacity than I give this film a pass. The Hateful Eight is easily a film lingering too long at the saloon; with Tarantino’s sweeping sense of style comes a lethargy with his pacing, an indulgent, raconteur-ish appropriation of technique that outstays its welcome and, sadly, minimises impact. Where his early films were like a pummelling by a prize fighter, this film seems to drift in and out of itself, like low tide brushing against the beach and disturbing almost no sand. While I can’t say I hated this film (quite the opposite, I did enjoy it), I do feel Tarantino’s latest project has the hallmarks of somebody to whom nobody says “no Quentin, you can’t do that”. Perhaps somebody should.