Following the announcement of the Academy Award Nominations on January 15th, attention turned quickly to the fact that – once again – there were no “people of colour” nominated for any of the major awards. A Twitter hashtag, #OscarSoWhite, emerged to shame the Academy with once more reducing people of colour or ethnicity to a redundant element in this year’s Oscar race. Stars such as Will Smith, his wife Jada Pinkett-Smith, and director Spike Lee, came out to decry the lack of diversity in the Academy’s nominations, and used the fact as a platform to claim discrimination against black people by the largely white Academy voting base.

Today, Academy President Cheryl Boone Isaacs, who is the organisations first black woman President, and third woman overall to assume the role, announced the first of what is expected to be a raft of changes to the Academy’s rules governing voting, membership and other aspects, in order to try and find balance in diversity. The rules are partly explained in this piece from TV Guide:

Under the new rules, new members will have voting rights for 10 years, and will only receive lifetime voting rights after three 10-year terms, or after they have been nominated for an Academy Award. The same rules will apply retroactively to existing members. Performers who do not remain active will be demoted to emeritus status, meaning they will continue to have all other benefits of an Academy membership, but will no longer be able to vote. 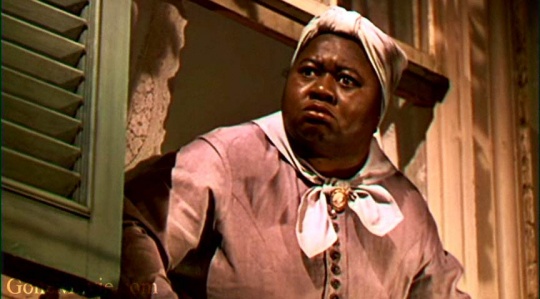 Exactly how this brings more women, black and ethnic people, or those with some other background than “white”, is a little confusing – nay, negligible. At best it seems like a half-baked idea to appease the screaming, offended masses of those who think the Academy is inherently a racist organisation. Basically, if you’re an old, retired actor or Academy member who hasn’t worked in ten years or more, you no longer get a vote at the Oscars. Irrespective of what colour, ethnic group or religious affiliation you may have. At first blush, it looks suspiciously like a knee-jerk reaction to a swing in the Twitterati attention span that, if taken in a reasonable and considered approach, might otherwise be handled with a lot less condescension and a lot more applicability to an industry that isn’t known for its ability to shift swiftly to accommodate new ideologies.

As much as the Oscars get a bucket-load of grief for being an affair for the snobby Hollywood elite, an exclusive club to which most of us normal human beings can never hope to enter, they’ve suddenly become a defacto racial poster child for those screaming about diversity across all aspects of society. Far be it for me to become overly political in what is a film review site, but exactly why the Academy needs to shoulder the blame for a perceived lack of diversity in Hollywood remains a fuzzy grey area of a social reform agenda. Claiming the Academy somehow represents America’s racial divide is rather disingenuous, given the vast bulk of people who make up the voting base in the first place – Hollywood is somehow given the weight of racial restriction when it actually seeks to represent all colours and creeds so long as they deserve merit.

The problem with a merit-based organisation such as the Academy, which relies on a large segment of its voting arm to actually view all possible films on which to cast a decision, is that it’s hugely politically affiliated. Not with government political associations, but rather within the old studio system. Within Hollywood, it’s a long-established fact that it isn’t so much what you know, but who you know, that counts. The reason Jennifer Lawrence keeps being nominated for films that are otherwise total shit (Joy) is that she’s seen as the darling of the Academy, a pin-up girl for White American Success, a marketable name and face that brings in a demographic the Academy might struggle with ordinarily. 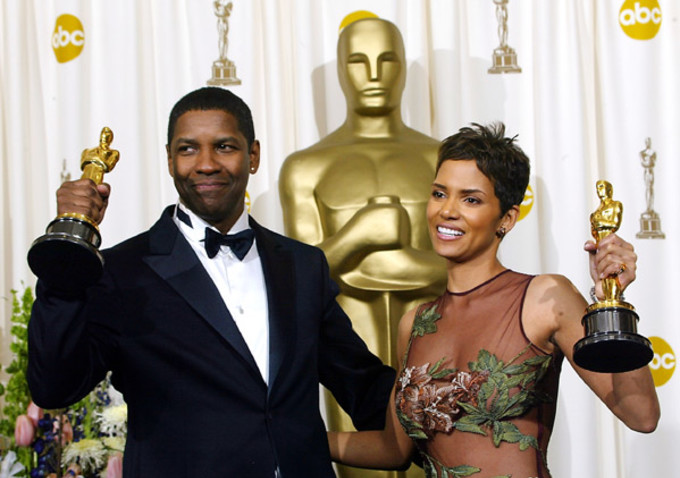 Now, I’m pretty sure JLaw’s nomination is the result of countless conversations around the water-cooler by intra-industry alums who seek to further her career, and possibly their box-office, if they can only keep her in the public’s frame of view – that is, if they can splash “Starring Five-Time Academy Award Winner Jennifer Lawrence” on the film’s poster, that’ll bring more people to the cinema. It’s not something overt, mind, because I doubt a studio or representative agency would strategize in such a manner, but when we’re bombarded by “for your consideration” advertising within the industry itself, it’s little wonder Hollywood has a public façade issue to correct. Internal voting has become an industry political minefield, so it’s obviously harder to those outside the system to break into it. Nepotism and insular prestigious dispositions are harder to counter.

In light of #OscarSoWhite, actors Charlotte Rampling (nominated for an Oscar for 45 Years), and Michael Caine have weighed in on the controversy, courting controversy of their own by claiming the racial divide isn’t one so easily overcome. Rampling is on record saying this:

“There are so many problematic things said: ‘He’s too handsome; him, he’s too black; he’s too white…’ There is always someone to say: ‘You are too…’ But will we say ‘we should classify everything in a way that will make sure there are lots of minorities everywhere’?”

Michael Caine echoes Rampling’s comments in a piece in Variety (which reported from the BBC):

“There are loads of black actors; I think in the end you can’t vote for an actor (just) because he’s black. You can’t say: I’m going to vote for him, he’s not very good but he’s black, (so) I’ll vote for him. You’ve got to give a good performance.”

What both are saying (and to which the rage-filled controversialists are up in arms arguing against) is that to receive an Oscar nomination it shouldn’t matter what colour your skin is, it should be based on the performance of the artist. I doubt you’ll find anyone arguing this point. What nobody wants to say out loud is that when Idris Elba gives a searing performance in Beasts Of No Nation, and doesn’t get a nomination, is that his performance is fundamentally worse than, say, Leonardo DiCaprio’s in The Revenant? Or that Will Smith was passed over for his performance in Concussion not because it wasn’t an Oscar-calibre performance, but rather that he’s black? A man who once dominated the global box-office every single year for a decade now claims prejudice for not getting a gong? Are you f-ing kidding me?

People bandy about words like “minority” and “race” like they’re cue cards for moral outrage. Stamping your feet like petulant children when you don’t get what you want results, in my house at least, in a time-out and a restriction of some kind. Watching people carry on about racial prejudice when talking about the Oscars is mind-boggling for its vacuously redundant narcissism. Are black people under-represented in the Academy and its voting block? Probably. Are people of Asian descent, or those of American-Indian descent? What about people with intellectual disabilities who work within the industry? Should we mandate a minimum number of minority performers to be nominated regardless of merit? Create new categories such as “Best Black Actor In A Leading Role”, just to appease those who think they’re not getting the attention they deserve? 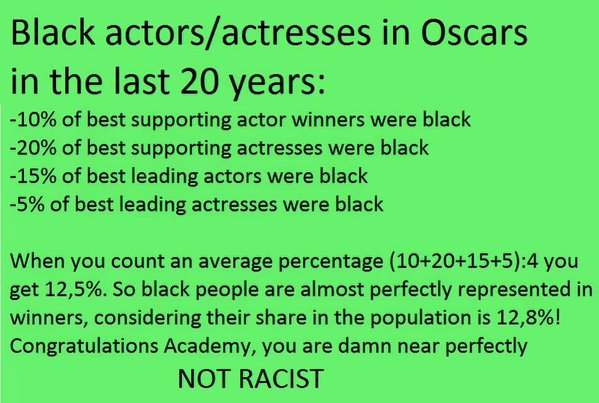 Before you suggest that somehow I’m against black people or whatever insidious nonsense you’d like to claim, I’m not. Frankly, I don’t give a shit what colour your skin is, or if you believe in the existence of aliens or are a member of the Church of Scientology – I honestly do. not. give. a. fuck. Give me a good performance in a film and it’ll speak for itself, awards or not. Sure, I think Idris Elba should have snagged a nomination for his acting, and surely Straight Outta Compton could have got something for its time, but I’m not going to bemoan the fact they didn’t. It’s your right to, so go ahead if you want.  Claiming minority bias over a merit-based competitive award is as reductive an argument as claiming you can make a silk purse from a sows ear. Michael Caine also intimated that he voted for Idris Elba for his performance, but that fact seems to have been ignored by the sundry hashtag community looking for a quick dive-bomb.

This isn’t to say that minority groups don’t have a point; black Americans have long had a cause to reclaim their social equality, and nobody is going to argue with that. And I’ve no doubt the vast majority of the Academy’s membership is made up of white people moreso than those of other colours. But to claim the Academy, an organisation which has tried to accommodate everyone within its insistently limiting borders, is overtly, actively prejudiced against minority groups is a claim bordering on specious. You guys all know that Hollywood was founded by a bunch of Jews, right? Possibly the most persecuted minority group in history?

The #OscarSoWhite movement has become a groundswell in easy-speak outrage and effortless headline grabbing by entitled gentry with whom the real world has no attachment; they don’t care about minority equality so much as making people ashamed about not having it. The Academy’s knee-jerk response to a Twitter hashtag and soapbox sermonizing by several slighted members of its community speaks more about the conciliatory nature of media brouhaha than it ever could about real social reform. Turning what should be a fun, entertaining platform to argue about the merit grading of various films into a soapbox for outrage and claims of prejudice does nobody any real good, and make the squawkers look like petulant children.

Great art continues throughout history – the moral or social crusade around it will not. I’m not saying the Academy shouldn’t exemplify diversification within its membership, but I am saying that people using the organisation as the whipping boy for prejudicial outrage might have their crosshairs aimed in the wrong direction.

10 thoughts on “#OscarsSoWhite: A Manufactured Crisis Of Diversity”