The original night at the museum.

Back in the late 90’s, before DVD was released to the mass market (yeah, that long ago), back when VHS was just beginning to come along in “HI-FI Stereo” and Laserdisc was too expensive for somebody in their early 20’s, The Relic was my go-to film for audio demonstration. Early surround sound technology was still relatively expensive, and not everyone had it – I did – and so a film with as thunderous and cavernous a sound mix as this one was pure gold for demonstration purposes. The Relic is a tried-and-true creature feature, a bloody, schlocky, preposterous B-movie entity that delivers a few frights, some nice decapitations and eviscerations, and demonstrates that lighting in a film can add just as much to the movie’s atmosphere as its sound design. 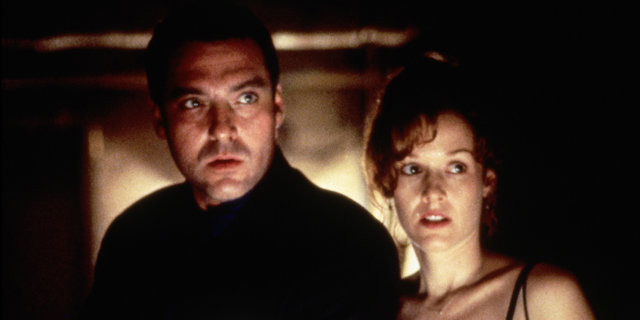 The Relic was one of the first films I saw at a then-state-of-the-art digital theater in 1997, and although it was high hokum of the Hollywood variety, the direction from Peter Hyams and the creature work by legendary Stan Winston galvanised me in a way many films to that point had not. Set in the Chicago Museum of Natural History, The Relic involves a scientist (Penelope Ann Miller) and a police lieutenant (Tom Sizemore) cracking the riddle of a series of baffling murders within the building, all of which revolves around the mysteriously absent anthropologist John Whitney (Lewis Van Bergen), who has sent a pair of crates back from an expedition to Brazil. As the museum is set to hold a gala evening to open their latest exhibit, an enormous monster begins to send terror through the halls as it brutally kills as many people as it can get its claws into.

As far as a story goes, The Relic borrows liberally from such classics as The Thing, Aliens, even Predator, in giving life to its considerably monstrous creation. Credited to four screenwriters and adapted from the novel of the same name by Douglas Preston and Lincoln Child, The Relic’s B-movie DNA is present almost from the opening moments, as we see John Whitney imbibe some ju-ju juice from some far-flung Amazonian tribe, before cutting to Chicago and the ubiquitous Doctor Margo Green (Miller). Throw in the hard-bitten, superstitious cop (Sizemore), a wheelchair-bound professor (James Whitmore, better known as the tragic Brooks Hatlin in The Shawshank Redemption), a sleazy, scheming colleague of Green’s in Greg Lee (Chi Muoi Lo), and a cavalcade of Chicago’s finest boys in blue, and The Relic is a paint-by numbers schlock thriller that offers scant creativity in its framework.

However, all is not lost – Peter Hyams’ decision to film The Relic entirely using natural light – ie, only the light cast by whatever would practically be around, such as torches, moonlight, interior lighting etc – is reminiscent of Kubrick’s similar methodology on Barry Lyndon. Although comparisons to Kubrick might be overblown in the case of Hyams (and saying that, Hyams did give us a sequel to 2001: A Space Odyssey, so perhaps idolatry isn’t far from the truth…) the fact is that The Relic works because of this unique visual style. I’d hate to have to watch movies doing it this way all the time, but for a 90-odd minute thrill-fest it is serviceable. In fact, it’s more than serviceable, it’s terrific. The Relic’s main anticipatory element is atmosphere: the script thunders with inanity and typical mid-90’s masculinity, and the characters are decidedly one-note, meaning that all that’s carrying the film in the end is its atmosphere and sense of horror.

Once the film’s eponymous creature makes its appearance about the half-way mark, the film takes off. With the first half mired in inexplicably lengthy dialogue about DNA and fungus and creatures eating hormones and hypothalamuses (or whatever), it’s not until we see the creature in its full, monstrous glory that The Relic kicks itself into top gear. From there, it becomes your typical run-and-scream horror flick, as the body count piles up and the science leaps out the way of the oncoming gore-train. Stan Winston’s creature design here is superb – although we never really get much more than a glimpse of the monster, shrouded in darkness throughout most of the film, we get enough to stimulate the primal, fearful aspects of our brains and we naturally find this thing abhorrent. The fact it’s accompanied by an exceptionally heavy LFE presence helps: every footstep, growl or animalistic hiss the creature makes is granted a thunderous bass frequency that threatens even the hardest hi-end home cinema. As improbable as that might be, it’s again a stylistic choice by Hyams (suited to his hyper-real sensibility, as displayed in his follow-up film, the turkey that was The Musketeer) that works for the film, even though it won’t work for everyone.

What’s most interesting in The Relic is that the two lead characters are primarily out of the story, or utterly ineffectual, for the majority of the movie. Sizemore’s character is more like a supporting character for all he actually does here, while Penelope Miller’s main job of Mrs Exposition is one that reduces her to a simple mouthpiece and that’s it. Her tete-a-tete in the final act with confronting the creature is exciting, sure, but hardly the stuff of Ripley fronting up against the alien queen. If anything, it’s the secondary character who provide the most fun here: Linda Hunt plays the museum’s director with that earnest sardonic humour she’s brilliant at, while Clayton Rohner’s Sergeant Hollingsworth more than proves himself as a police officer as he actually accomplished most of the grunt work the movie throws up. By far the most wasted character is Whitmore’s Professor Frock, who does a far better job delivering the scientific mumbo-jumbo on display than Miller ever does, and gives more to his character in his three minutes of screen time than Sizemore can muster over a two hour period.

The Relic is B-movie pulp dresssed up with A-movie money, and in general everything works more often than it doesn’t. The visual effects are good for the mid-90’s (the monster is lit completely on fire at one point, and it’s this sequence where you really say “holy f@ckballs this movie is awesome!” as you chow down more popcorn) and the film’s visual and aural potency amplifies the pulp–inspired mixture of science and absolutely bonkers fiction. The Relic is a film that will loose much on the small screen, and deserves the biggest, loudest, widest playback experience you can muster. Stupidly entertaining, The Relic is a pre-millennial blast of gore and horror mixed with a loose police-procedural that offers visceral thrills within the context of nonsensical scientific believability.

6 thoughts on “Movie Review – Relic, The”