[Insert the Latin phrase for “The power of Christ compels you!” here…]

Apparently, the Vatican has the market cornered in supernatural spooky shit. Yeah, because nobody wants to mock the underworld mythology of Islam or Buhddism, Christianity’s spectral underworld once again forms the basis for a horror film out of Hollywood, replete with malevolent iconography and more jump-cut bafflement than you’d get in a dozen films of this ilk. Because The Exorcist was (and still is) considered one of the greatest scary films of all time, a byproduct of that success is that every other film to come since tends to be left trying to escape the shadows of Linda Blair’s possessed Regan – usually without success. The Vatican Tapes, which contrasts the exorcist aspect of religious theology with modern-styled horror films and their jarring, edited-by-a-threshing-machine visceral topography, is another poor attempt at a much-mined genre; loud and obnoxious, this film’s bludgeoning of its audience is approximately similar to the feeling of being sucked into a jet engine. 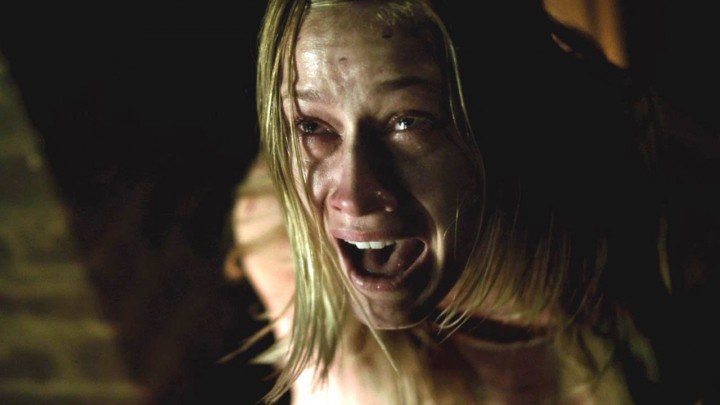 Directed by one half of the duo behind the Crank franchise (and the last of those godawful Ghost Rider movies), The Vatican Tapes is insipid, tiresome rubbish. Featuring some astonishingly terrible acting, particularly from the normally okay Dougray Scott, as well as nonsensical staging of the film’s “action” sequences, the film’s only virtue is its opening “documentary” sequence, and the closing credits. Which means this is poor, a poor poor film lacking a single reason to exist. Sure, its production values are average, and Mark Neveldine’s camerawork is slick and appropriately pulsating, but the dire lack of compelling characters and a foundation built upon audience familiarity with this genre (instead of manifesting its own destiny) can’t salvage much at all.

The thing about demonic possession is that its inherent scariness (aside from the obvious part about a person’s body being…. well, possessed by a demon) is driven by a long, virulent history of anecdotal and evidentiary testimony here in the real world. Now, I’m not a subscriber to demons per se, but that doesn’t mean they don’t exist. A film involving exorcism at least has to content with the long history of demonic possession throughout recorded history, and so The Vatican Tapes takes what I think is a short-cut in simply giving Angela a bunch of weird behavioral issues almost from the get-go, as a way of getting us into the meat of the story without, you know, making the characters interesting, or developing the world in which these characters exist. 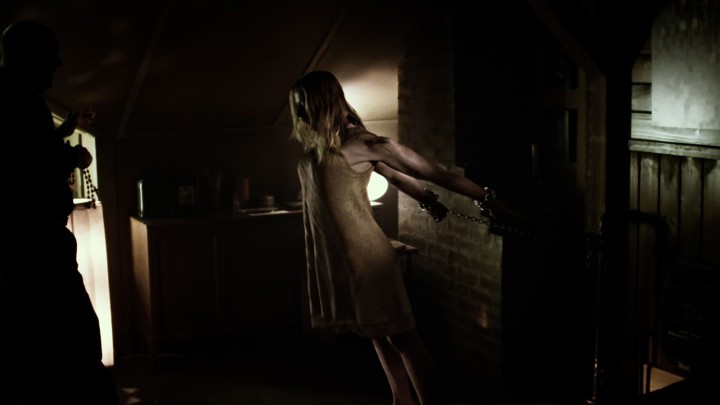 The script handles the exposition with the lumbering grace of an epileptic elephant, and as an endurance test of nail-clenching inanity it’s truly hard to fathom. Throwaway dialogue meant to give us insight into these characters lands with virtually zero impact, a snide, “aren’t we clever” trope of modern horror films that begins to grate rather quickly. Angela’s continual guzzling of water, her hallucinations and weird, I’m-possessed skittishness induce yawns more than scares, while continually abrasive sound and music cues imply that evil and carnage aren’t far away – yes, this film gives a lot of its good stuff away through muddy technique and ill-conceived parlor tricks. Not to mention that none of the cast are supported by lines of dialogue that don’t just crunch through teeth with every utterance.

The cast try, they certainly do – Olivia Dudley looks like a combination of Kristen Stewart and Alice Eve, while John Patrick Amedori’s diffident boyfriend, Pete, just seems to…. exist. The antagonism between he and Roger, an overcranked Dougray Scott, is barely explained or examined, beyond just a mechanism to drive some angst into the film, while Michael Pena, Djimon Hounsou and Peter Andresson look cool in black as Vatican priests. But that’s about it. This film is all shock and awe (and barely any of that, at that) without conviction – it’s a series of mildly spooky shock sequences strung between lame characters and even worse dialogue. Neveldine goes for broke with his direction, a sonic and visual assault that unfathomably cannot sustain legitimate tension at all; his shaky-cam aesthetic from Crank is meant to inspire a jagged sense of fearfulness, yet it only provokes disgust that people think this “quality film-making”. Frankly, I’m leaning towards thinking that Crank was a fluke, because just about everything else I’ve seen has been borderline unwatchable.

The Vatican Tapes is the kind of film designed to fill extra screens at a multiplex, a money-grabbing exercise in tedium and valueless shock that avoids actually getting inside your head with spooks, and just activating the primal flight response through hyper-audio cues and assaulting visuals. And if you make it to the end, stick around for a 10 minute closing credit sequence. I shit you not. Ugh. This film needs exorcising from my brain.