A follow-up of sorts to 2015’s other breakout Netflix series, Daredevil (which I extolled the virtues of back in April), Jessica Jones sees Krysten Ritter playing the New York superhero-turned-PI, a kind of modern reinvention of Philip Marlowe or Sam Spade with the helpful addition of superpowers. Atypically for Marvel, Jones is not your typical hero – she suffers PTSD from a previous encounter with the series’ central villain, Kilgrave (played by former Doctor Who star David Tennant), has a drinking problem, and works for her living as an investigator for hire in New York’s Hell’s Kitchen, which is, in a coincidence, the same part of New York City that Daredevil claimed as his own. Not exactly a glamorous way to help those who need it. 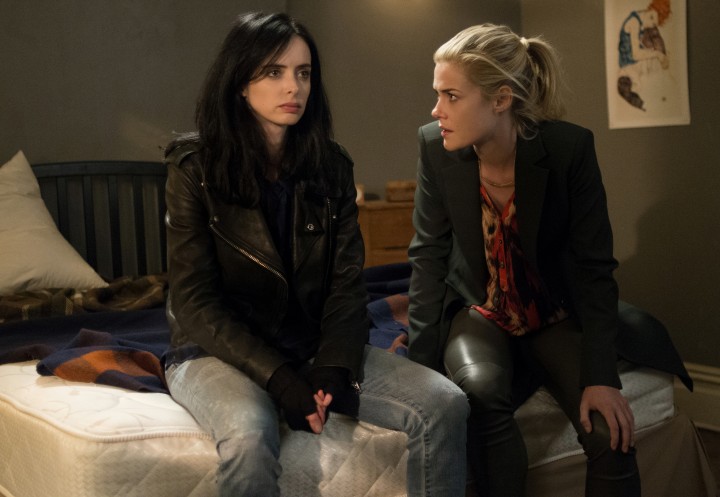 Although the character herself would baulk at comparisons, Jessica Jones’ rise to screen prominence was borne out of a cultural love for fellow Marvel heroines Black Widow and Agent Peggy Carter. Since her debut in Iron Man 2, Scarlett Johannson’s portrayal of Natasha Romanov – aka Black Widow – have led fans both hardcore and casual to badger Marvel Studios for a stand-alone film or series about the character. The continual avoidance by the studio is baffling, given her inbuilt fanbase, but to pervert rioting in the streets, Marvel have delivered two female-centric series; Agent Carter, which I gave a thumbs-up here, and now Jessica Jones. Although vastly different in tone and setting, both Agent Carter and Jessica Jones have delivered suitably entertaining serials revolving around female characters from Marvel’s stable.

Jessica Jones first season runs at 13 episodes, equal to that of Daredevil’s opening salvo; whereas I felt each episode of Daredevil moved the story along with a focus on specific character or narrative sub-arcs, Jessica Jones’ thirteen 50-minute episodes feel a bit stretched in places, with secondary characters given screen time the show is unable to pay off, or a sense of treading water to accommodate such a lengthy run.

The crucial element of the story involved Jessica’s relationship with Kilgrave, a psychopath who can control people through simply speaking commands at them; prior to the series starting, Jessica’s PI business is built off her emotional state following a period in which she was under Kilgrave’s thrall, and a period in which she committed acts of violence against people using her incredible strength. Having enhanced strength makes her a powerful physical threat to those she confronts, but in battling with Kilgrave using her wits, she’s constantly on the back foot. The series’ unravelling of the various sub-plots – involving Jessica’s adoptive step-sister, famous New York radio host Trish Walker (Aussie actress Rachel Taylor), resident barkeep Luke Cage (Mike Colter), and Jessica’s neighbours Malcolm (Eka Darville) and Robyn (Colby Minifie), not to mention a law firm associate Jeri Hogarth (Carrie-Anne Moss) – is largely instigated by the fact that Jessica is at first terrified of, and then actively seeking to kill, Kilgrave. 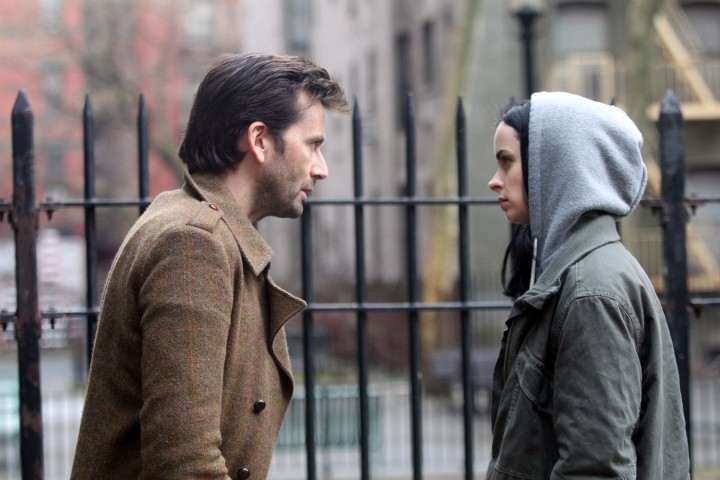 Having a villain with such an amazing power – a bit like vampires compelling people do do what they ask – proves to be one of the series’ best elements; Kilgrave could ask you to step in front of a bus, and you will, knowing you’ll die, so whenever our heroes are near him it’s simply a matter of time before he asks them to do something truly horrific. Tennant relishes the role, and actually gets better as the show goes on (he’s barely in the first half-dozen episodes), and he’s aided by the fact that his character, similarly to Vincent D’Onofrio’s Kingpin in Daredevil, hints and dangles some tragic back-story to give him empathy from the viewer. I should point out that Kilgrave is entirely irredeemable, though, no matter how much you feel sorry for him. He even says it himself.

Jessica Jones herself is more difficult to get a handle on. Initially she’s just an outright bitch to everyone, and the first two or three episodes I just wanted to smack the frown off Krysten Ritter’s face and tell her to simply get a grip, but as the series progresses and we see more of her backstory (she grew up as a foster kid following the death of her family) and her relationship with Trish, I came to find her a little less abrasive than she tries to be. Indeed, Ritter’s a master at the downturn comeback, berating and insulting just about everyone on the screen as Jones, ripping through New York as she tries to at first control, and then kill, Kilgrave. Personally, I’m surprised Jones has any friends at all after this, given she treats everyone like shit and makes no apologies for it. Even Luke Cage, her one-time lover, gets shot in the face by her at one point. Ritter does a solid job in giving Jones an earthy, lived-in feel, but buying her as a strung-out ex-hero… well, that’s a tougher sell. I’m still thinking about that. 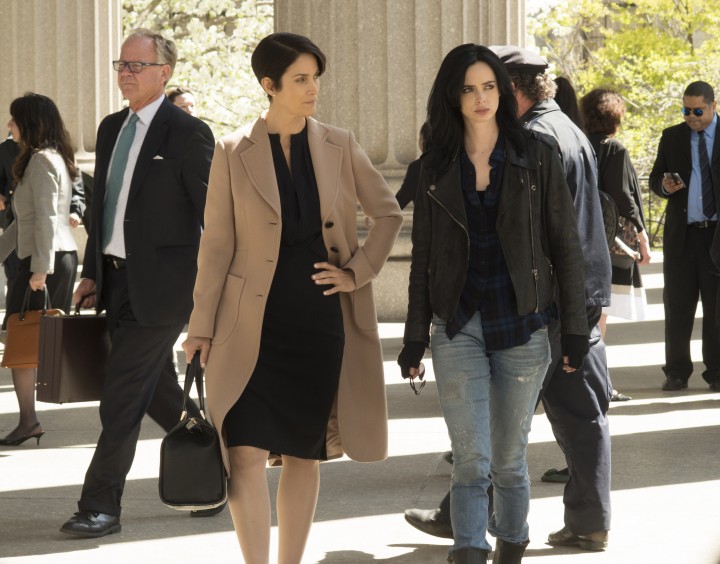 Whereas Daredevil maintained a level of shock-factor awe during the entirety of its run, Jessica Jones occasionally feels like it’s pulling contrivance simply for the sake of stretching out a story. Jones’ rush to confront Kilgrave, and her continued assertion that only she “can stop him”, kinda doesn’t feel believable when all it would take is a sniper round from three blocks away to end the series right there. Jones doesn’t strike me as the kind of hero who would have a moral code about not killing to stop somebody killing more – the argument we all have with Batman not killing the Joker, as a precedent and example – and the way the show wrings out the tension by having Jessica not kill (or at least permanently disable – the guy can’t command anyone if he’s missing a bottom jaw…) Kilgrave when she has the chance (and she has plenty of those!) feels clumsy at times. Like, midway through the season I was screaming at my TV just telling Jessica to punch the shit out of Kilgrave so his spine snaps and just walk away, job done. A tenuous plot device of having an innocent girl imprisoned for an act committed under Kilgrave’s control keeps Jessica from doing just that, but the constant near-misses she engages with begin to feel forced as the show continued.

Subplot arcs involving Trish and her mother (a surprisingly good Rebecca DeMornay), Luke Cage’s invulnerability and the fact that Jessica isn’t alone as a superhuman in New York City, a mid-season foundation for whatever is going to happen in Captain America: Civil War and the next few Netflix series – Luke Cage, Iron Fist, and the team-up series The Defenders – and a final episode link to Daredevil, all provide plenty of meaty grist for the show to use, but for whatever reason these arcs don’t really meld well into Jessica’s world, at least not where I was actively invested in them beyond merely being entertained. The introduction of Will Simpson, played by another Aussie actor, Wil Traval, was interesting but the set-up and continuous laying of tracks for his character didn’t pay off here. There’s a weird vibe about his character that felt off anyway, but an unresolved mystery surrounding him should have at least partially come full circle here – it would appear Simpson is being used in more shows than just Jessica Jones, but a lack of a full stop on his role in this show kinda felt like having a rug pulled from under you.

Too long; didn’t read version? The first three episodes are terrific. The final 4 episodes are absolutely awesome. The rest? Middling, but still entertaining.

The use of Kilgraves powers.

Too much plot-weaving mid-season, episodes feel stretched or flabby.

Jessica’s neighbours, all of whom serve zero purpose and amount to almost nothing by the end of the season.

The emotional indifference I felt about Will Simpson

The resolution to Hope Schlottman’s arc.

My buddy Grog thought the show was perfect.

Tony Cogan over at Channel: Superhero reviews the first episode.