The unexpected passing of legendary horror film-maker Wes Craven earlier this year was met with near universal sorrow; the man gave us not only one of the 90’s most successful franchises, Scream, but also one of the 80’s most iconic horror creations – Freddy Krueger. Although Kruger’s legacy has since been tarnished by years of sub-par sequels (and the inevitable modern reboot, in 2010 – ugh), the original Nightmare On Elm Street remains an identifiable benchmark film in the horror genre, not only for what it gave audiences as far as scares went, but introduced the most popular movie monster since Dracula and Frankenstein. 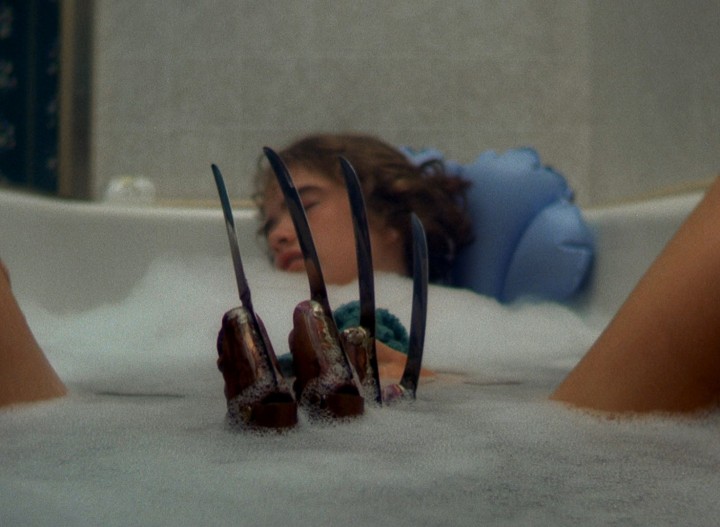 Nancy Thompson (Heather Langenkamp) suffers from recurring nightmares – a red and green sweater-wearing demonic creature, named Freddy Krueger (Robert Englund), stalking her. When Nancy discovers that her friends have also had similar nightmares featuring Freddy, she comes to realize that the apparent murders and deaths in the town aren’t exacted by human hands. As they fight the urge to sleep, Nancy, together with her boyfriend Glen (Johnny Depp) and her father Lt Don Thompson (John Saxon), must try to unravel the mystery of the knife-wielding maniac before they too become victims to his dream-death mission.

There’s very few films these days that one might consider the very definition of “iconic” – it’s a word bandied about a lot without genuine meaning – but you’d have a compelling argument in making a case for A Nightmare On Elm Street to warrant such a label. Although enormously dated, and poorly acted across the board, the visceral gore and Wes Craven’s ability to hone in on people’s darkest phobias is enough to claim the title of one of the 1980’s most recognizable horror franchises. Nightmare spawned a multitude of sequels, and was rebooted as recently as 2010 with Jackie Earl Haley assuming the role of Freddy Krueger, but none (in my opinion) capture the raw low-budget freaks of this, the launchpad original.

The film was written and directed by Craven, following a string of moderately successful films including The Hills Have Eyes and Swamp Thing, and made great use of genre tropes which had become de rigueur since John Carpenter’s Halloween launched the modern jump-scare flick during the 70’s. Comparatively speaking, Nightmare is remarkably dated, with Craven’s use of prosthetics, limited visual tricks and a grab-bag of shadowy lighting motifs carrying the burden to delivering the violent, stylish horror elements to 1980’s audiences. I remember seeing this for the first time back when I was young and thinking the subtle sexualised violence (most of the girls wear a sleek negligee at some stage, or bare their chests for a split second here and there) was kinda cool, and the idea of Freddy Krueger captivated my imagination. Most of the death sequences were thrilling, with gravity and logic defying blood and gore on show in a way that defined “movie magic”, as my parents liked to call it. 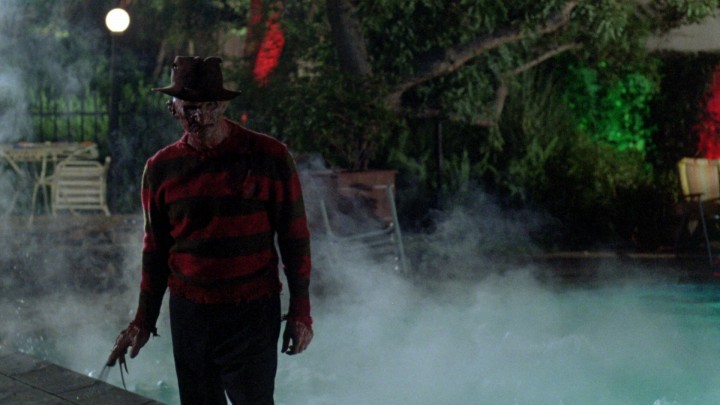 But as cool as it was in 1980, there’s a lot less wow factor here – most of the effects have dated badly (one, however, where Freddy’s silhouette appears to bulge from a ceiling cavity in what became one of the film’s most iconic moments) and lack considerable potency in light of advances in film-making technology, but if you view the film with a backdated mindset you’ll find plenty of stuff to impress. What won’t impress, however, is the acting skillset employed by the youthful cast here. John Saxon aside (and even he struggles with the wooden dialogue from time to time) most of the cast come off as amateurish – watch quickly for Insidious star Lin Shaye as a schoolteacher – and it’s depressing. Lead actress Heather Langenkamp is awful as Nancy, as wooden an actress as you’ll ever see, making following her journey to uncovering Krueger’s motives a bit of a chore. Sidenote: watch for future voice of Roger Rabbit in Charles Fleischer, as a sleep doctor who runs a test on Nancy at the behest of her mother.

On the plus side, the film is terrific visually. When characters aren’t talking, when they’re screaming and running from the awful visage of Freddy, the film actually packs a fair wallop. As the dreams become more and more vivid, as the stakes gradually rise, as the demonic nature of Kruger is revealed, Nightmare really hits its stride with Craven’s classy cinematography. But the kneecapping of the film is complete whenever a main character opens their mouth to speak, for the clunky, wooden performances from most of the cast ruin much of the fantastical mythology about the story. Craven lights his horror sequences well, giving the dreamlike state a real sense of visceral contrast, and the performance of Robert Englund as Krueger is especially malevolent. A Nightmare On Elm Street at least has quality technical work backing it up.

Although it suffers badly from the acting within it, the film rightly belongs in the canon of iconic horror entries out of Hollywood’s enormously productive 80’s period. Together with Halloween’s ubiquitous Michael Meyers, and Friday The 13th’s Jason Vorhees, Nightmare’s scion of cruelty, Freddy Krueger, takes his place in the pantheon of instantly recognizable characters on the big screen; for his impact on modern horror, the film gets a pass even in spite of its grasping budgetary issues. The “story” stuff is woefully underwhelming, but the “horror” elements work an absolute treat.