There’s a line of dialogue, early in this documentary, in which filmmaker Alex Gibney gives the allusion of Steve Jobs as a modern cultural equivalent to John Lennon, for his death in 2011 was met with an outpouring of sadness and grief, the feeling of absence when one loses a mythical icon of innovation and vision. It’s as prescient an observation as any made about Jobs either before or after his passing, for as much as actors and musicians, writers and poets bring us beauty through their work, so too Steve Jobs did through technological innovation. Gibney, who made waves with his evisceration of Scientology in Going Clear, as well as the superb nail-tearing journey into The Armstrong Lie, turns his considerably insightful gaze upon Jobs’ life, as well as his rise within what would become the global behemoth in Apple – inventor of the Macintosh, the iPod and iPhone – and changed the way computers became an integral part of our everyday lives.

Whether you’re an Apple-tech fan or not (I am), there’s no denying the impact Steve Jobs has had on modern society. Plenty of retrospective ink and video has been written and screened in the years since Jobs passed; many of them have attempted to perform a kind of autopsy on the impenetrable life of Jobs, trying to understand the drive and nuance of a man who, without ostentation, could be considered to have changed the course of history. Hell, I think I’ve seen easily four or five documentaries prior to this one, although I think Gibney’s film focuses more on Jobs’ idiosyncrasies, his relationship failures and internal character flaws (as seen from the outside, for the film uses Jobs’ associates, partners, ex-girlfriends and friends to drive the narrative). This doesn’t even account for the feature films – one starring Ashton Kutcher, and a more recent one starring Michael Fassbender – that sneak out in Hollywood’s never-ending appetite for compelling material.

For that, people call The Man In The Machine “controversial”, largely because it doesn’t paint Jobs in the angelic, mythic light Apple would have us believe – like many larger than life icons of our time, often their public image and their personal lives, their personal foibles, are a dichotomy of creativity and humanity. For his personable post-2000 announcement likability, when showing off the new iPhone or the next iPad model and the iOS functionality that would change the way people used their phones, he seemed to bask in the glory of his own magnificence. Largely, I think people accepted a smidgen of hubris on the part of Jobs, for by then he’d earned the right considering where he’d come from. But, as Gibney digs deeper, we learn that the man many hold up as a paragon of precision, dedication, passion and perfection, wasn’t the man we all probably thought he was. As one interviewee make note of: how much of an asshole does one have to be to be a success?

To my mind, Alex Gibney has become a legitimate title-holder for Michael Moore’s crystallizing docu-gaze (Gibney’s vocal delivery is enormously Moore-like), giving both this film and his previous efforts an almost apologetic furious-ness in divulging information. Gibney doesn’t just pull down the walls of our sacred cows, he demolishes them utterly, although you get the sense that he hates doing it. The information he ekes out of the interview subjects is conversational, like a Sunday afternoon chit-chat, interspersed with archival footage drawn from newscasts, Apple’s own advertising, as well as (most interestingly) deposition footage from 2008, as he lays bare the warts, the scabs, the bleeding edge scars of Jobs’ life and times. Gibney asks more questions than he gets answers to, in my opinion, but his insistent style of unraveling the truth from perceptive fiction is engaging and, at times, exhausting. 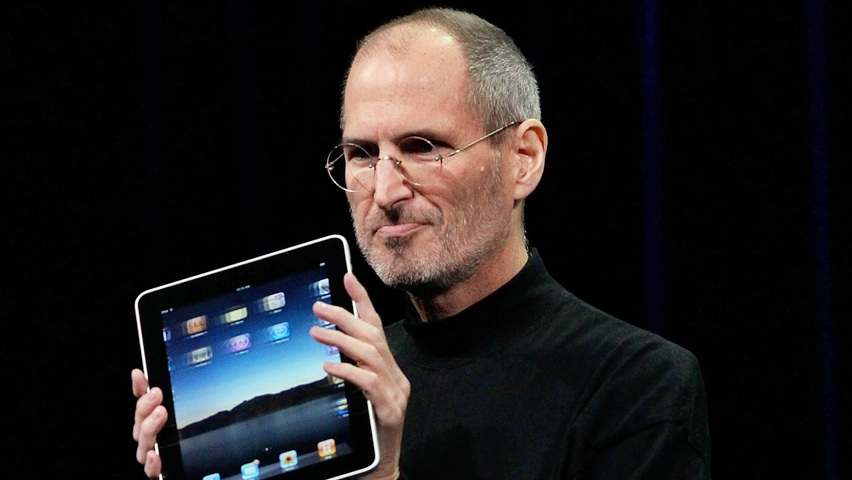 As a sidebar to The Man in The Machine, it’s become obvious to me that Apple’s shine has waned in the years since Jobs’ death. Jobs, whether he was an angel or devil, had become the face of the brand, a visual shorthand for innovation and quality, and with his ubiquitous appearances in his black skivvy and Seinfeld-esque jeans and joggers, his restrained style personified the Apple mantra of elegant simplicity. That style has diminished now, although it’s not entirely absent with the assumption of the brand-role of current CEO Tim Cook, but each time there’s an Apple event, the lack of Jobs’ confidence and presence is apparent.

Machine’s sucker-punch impact comes with the revelation – or rather the investigation – of Apple’s financial indiscretions with regards to stock options, and other ill-gotten gains. The first half of the film effective sets up Jobs as a driven, occasionally outrageous manipulative inventor, but the second half sees Gibney start to do what he does: tear down those walls of greatness. Apple’s questionable practices regarding Chinese workers, the suicides of those who build these new devices and who are under enormous time and security pressure, as well as its complicity in bullying over the infamous 2008 leak on the iPhone 4 (remember, a prototype was found on a barstool in a San Francisco nightclub!), paint a damning picture of just how much power Jobs wielded over his company, and over others, bending and occasionally breaking the law.

In viewing The Man in The Machine, we approach the sacred cow of Apple’s iconic late leader with a scalpel designed to flay the flesh off the bones of Jobs’ controversial life. Yes, the man wasn’t all sunshine and roses, no matter his public persona, and the film depicts people within the man’s sphere of influence containing an undercurrent of previously hidden torment now available to view. It’s a compelling, occasionally elegiac viewpoint of Jobs and Apple as a whole, a conglomerate of collusion and conflict, a flawed and weirdly fulfilling lifestyle of design, influence and capability. Yet at the heart of Jobs’ dream is an all-too human failing: the desire for perfection, and the ability to see that it will never happen. The Man In The Machine is one of the better documentaries on Jobs, and although it covers much of the same ground once again (especially the first third, which is basically the “origin story” of Apple and its growth into a global superpower), it’s definitely worth visiting if you’re open minded enough to accept that not everything we’ve been told is entirely true.