I told you, I don’t want a f@cking party!

Teenage years can be brutal: hormones, school, insecurity and the transition from childhood into adulthood all batter the psyche like no other moment in your life. Anybody who has ever suffered the indignity of puberty can attest to it being a remarkably formative period for young people as they make their way through the swollen glut of love, hate, fantasy and reality. Girl Asleep, a film made wholly in Adelaide, and premiering at the 2015 Adelaide Film Festival (I got a pass!), is a film that attempts to tell a story of a girl who has to navigate just that. The film is based on a production of Matthew Whittet’s stage play (Whittet co-stars here as the father of the lead character), and performed originally in 2014 by the Adelaide-based Windmill Theater Company, who dedicate their energy to producing teen-centric content for stage and screen – Girl Asleep marks their first full-length feature. It’s directed from Whittet’s own screenplay by Windmill Artistic Director Rosemary Myers, and features a young cast of relative unknowns in the major parts; led by Bethany Whitmore, as main character Greta Driscoll, the film is really a tale of two halves. 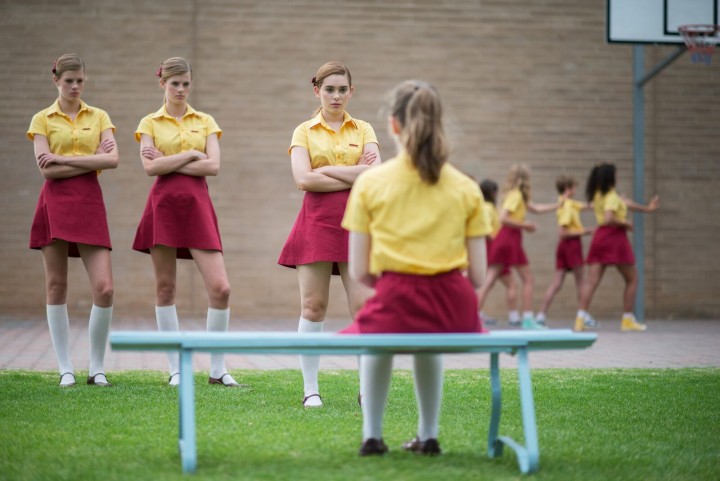 Greta Driscoll is a typical teenage girl: insecure, shy, and never-quite-fitting-in. Moving to a new school, she meets Elliot (Harrison Feldman), a nerdy, effusive type who befriends her. Greta is also courted by the local chic-clique, led by the cruel Jade (Maiah Stewardson) and her twin accomplices, Amber and Sapphire (real-life twins Grace and Fiona Dawson), but soon rebuffs their advances. Her fart-joke-telling father, Conrad (Matthew Whittet), and somewhat snobbish mother, Janet (Amber McMahon) attempt to get Greta out of her shell by having a fifteenth birthday party at their house, a party Greta doesn’t want. Greta also has visions via a magical music box in her room, of a fantasy world beyond the family’s back fence; once the party begins, Greta soon finds that the fantasy world becomes all too real.

Girl Asleep is basically Puberty Blues spliced with Where The Wild Things Are via Tarsem Singh filtered through the lens of somebody who’s seen the entire catalogue of Wes Anderson. Uniquely weird, almost stiflingly stilted throughout most of its running time, the film begins with a clunky, bizarre single-shot opening that makes you wonder exactly what kind of film you’ve signed up to see. Shot in full-frame aspect, similarly to most of Wes Anderson’s recent Grand Budapest Hotel, Girl Asleep stumbles through awkward set-up and character development where you’re not sure if it’s entirely serious, entirely humorous, or just outright batshit insane. Yet, as the film goes along, things start to happen – the characters find their groove, the story clicks into gear, and the cracking direction from Myers begins to find its feet. 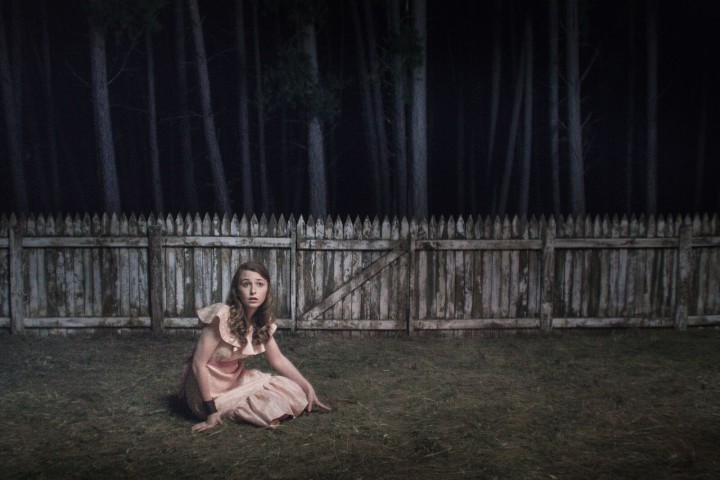 I mentioned that Girl Asleep is a film of two halves – the opening half is your basic teen-girl-trying-to-navigate-a-new-school stuff, with a hanger-on best friend and a torturous relationship with her parents. The second half sees Greta journey into the mysterious fantasy land beyond her back fence, an entire act of the film populated by stark iconography and some delightfully Cirque du Soleil-ish creations within that world. The juxtaposition between Greta’s “real world” journey and her venture into a metaphorical “dream world”, in which her mother and father appear as ghostly, weird caricatures of their worst aspects, is a jarring one, and at times I began to feel a little lost as to what I was supposed to be feeling about Greta’s growth through these events – is it a dream, a hallucination (the film is set in the 70’s, so it’s not entirely out of the realm for the last half of this story to simply be a bad LSD trip!) or is it Greta’s mind trying to solidify the various disparate elements of her out-of-control life into a cohesive whole. The film doesn’t explain itself explicitly, and leaves much for the viewer to ponder (which isn’t a bad thing); creatively, I couldn’t fault Whittet and Myers for their attempts to string in many of Greta’s fears within this sequence, but I just felt it didn’t “gel” in a way I could appreciate it.

Myers’ direction is keenly felt during the film’s latter stages; her obvious background in theater and the stage shines when the “fantasy” elements of the film kick in, and some of her shot selection and framing in the film is superb; exquisite POV shots populate many of the film’s dialogue sequences, where characters relate to the camera rather than to each other, and while it’s initially confronting to have the cast appear to continually break the fourth wall, the way Myers uses the form within the narrative works better than I expected. I mentioned that the direction here feels substantively similar to a Wes Anderson piece – symmetrical framing, some observant dolly-zooms and a lack of genuine “hand held” footage (thank the stars) give Girl Asleep both a stage-set and cinematic quality (if you get my meaning). The use of the full-frame aspect also provides Girl Asleep with a fairly constricted, almost claustrophobic sense of itself, echoing Greta’s sense that she’s restricted within her own life in many ways. And if you’re still wondering about Wes Anderson – think Stanley Kubrick on acid. 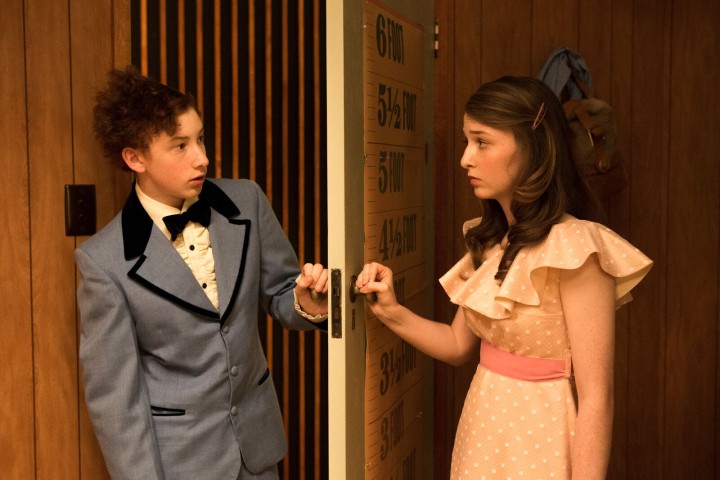 If there’s a weak part to the film, its the relatively inexperienced cast. That’s not to say they aren’t good, but as a comparative basis you can kinda see the seams showing here and there when the acting is taking place. Bethany Whitmore, who voiced a young Mary in the brilliant Aussie film Mary & Max, is solid as Greta, shouldering the film with distinction and a real sense of burgeoning sexuality mixed with frustration and resignation. Whitmore feels out of her depth occasionally, as if unsure of her character (particularly during the film’s early scenes), but at one point you can almost see the gears find their place and she really takes hold of Greta’s personality; as the linchpin of the film, she…er… linches really well. Her emotional marks in the film’s latter stages are hit perfectly.

The supporting cast are really all over the place, however. The adult characters, primarily Greta’s mother and father, appear to be some manner of Baz Luhrmann cast-offs – Conrad is a carbon copy of Barry Otto’s character from Strictly Ballroom – while Greta’s mother, a wonderful Amber McMahon, plays her part with a mixture of wide-eyed crazy and slit-eyed steely resilience. Generally, both Matthew Whittet as Conrad, and McMahon, are respectably solid. Harrison Feldman’s performance as Elliot is simultaneously grating and great. Elliot’s relationship with Greta is one of the more interesting plot points the film contains, and Feldman’s performance sails gleefully between teen-parody, nerdy insecurity, to heartfelt emotional resonance that delivers a resounding thump for the audience at the end. Not to mention, he kinda looks like The Sherminator from American Pie, so there’s that. But I think a lot of my issue with Elliot’s role is that it’s too hard to nail down whether he’s joking, serious, or just oblivious, and I couldn’t attach to him as a viewer. Your mileage with Elliot may vary. 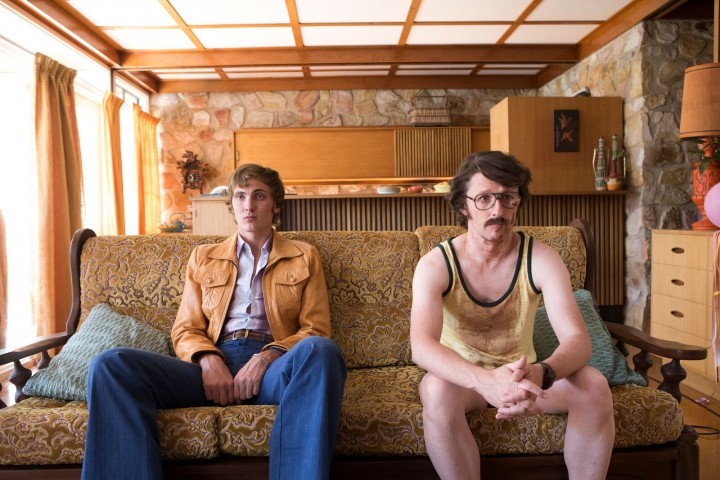 Bitchy trio Jade and her Omen-esque evil twins, Sapphire and Amber, are where I had the most trouble with the movie. Jade is a typically cruel Mean Girl, the kind of girl at school who trades on her “hotness” and sexual forwardness for just being an utter cow to everyone around her. Maiah Stewardson is commendably snarky here, although both her and the twins sense of menace is utterly undone by the film’s decision to clothe them in the worlds worst school uniforms. Stewardson’s aides, the Dawson sisters, perform well as suitably maladjusted bitches although having virtually zero dialogue, but at times they struggle with the “cool” factor of being among the film’s central antagonists.

Girl Asleep’s uniquely Australian sense of humor shines with almost every frame. Myers’ use of in-camera interstitials is clever, and the subtle 70’s-set anachronism engenders a sense of rose-coloured reminiscence. Some of the dialogue is terrifically wry, some of it just lands on the floor with a thud, but almost all of it is to-a-point well written, even if the direction or performance of it might not meet the same standards. By and large, however, Girl Asleep is just a terrific film for the story it tells, and although initially its quirks might throw off somebody watching it, it’s a story that bears sticking with for its revelatory emotional resonance. Yes, it’s amateurish at times (a sequence in which Greta and one of her fantasy characters have to run away, and then ride a horse away from monsters, is hilariously fake, and I’m still trying to figure out if that was intentional or not), but at other moments the film really nails the story and characters perfectly. The first half has to spend a bit of time finding itself as a story, but the latter half just explodes out of the gate and really elevates the film. A solid sound mix aides this effectively, too – kudos to sound designer Luke Smiles.

There’s a lot to enjoy in Girl Asleep. Although it’s a film awash with “debut film” growing pains and a sense of figuring it out as they go, the story’s raison d’etre is never in question, even if it has been tackled before in films and television. Entertaining, with more than a few chuckles, but decidedly weird and perhaps a little too obtuse for the intended audience, I was more than impressed with Girl Asleep, a film I look forward to revisiting as time goes by. Occasionally clunky, sprinkled with moments of brilliance, and flavored by an Australian sense of irony and wit, Girl Asleep is a film experience I won’t soon forget.