Fincher by way of Hitchcock.

If Se7en and Fight Club are arguably David Fincher’s best films, then Panic Room is easily my favorite in a purely entertainment sense. I’ve alluded to a vaguely Hitchcockian sense of technical proficiency by Fincher in previous reviews, notably The Game, his “man on a run” archetype in full bloom, but Panic Room represents Fincher’s command of the “man in a box” plot device – albeit with Jodie Foster in the box, alongside a pre-Twilight Kristen Stewart (who isn’t horrible here). A viscerally palpating film, with Fincher’s camera defying the very laws of physics (much like Robert Zemeckis’ films tend to do these days – Cast/Away and What Lies Beneath, I’m looking at you) as it moves through the central location used in the story, Panic Room’s constricted setting and run-the-gamut tension are superbly elevated by Foster’s performance, eliciting requisite engagement with the audience to make this film a slow-burn exercise in fingernail-snapping terror. 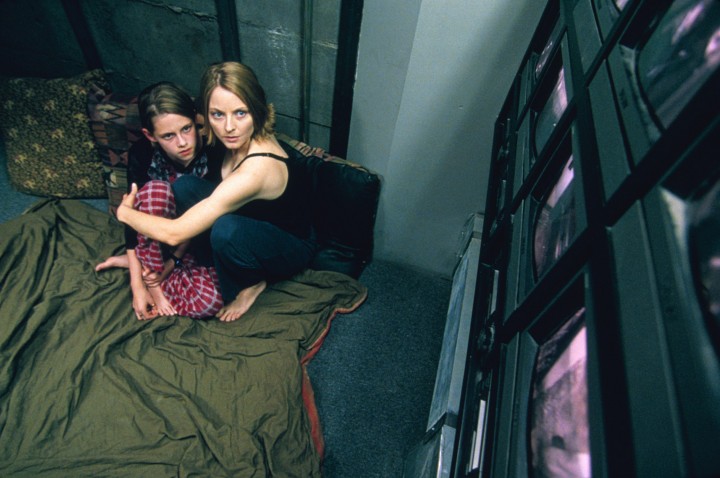 Synopsis courtesy Wikipedia:  Recently divorced Meg Altman (Jodie Foster) and her 11-year-old daughter Sarah (Kristen Stewart) have just purchased a four-story brownstone on the Upper West Side of New York City. The house’s previous owner, a reclusive millionaire, installed an isolated room used to protect the house’s occupants from intruders. The “panic room” is protected by concrete and steel on all sides, a thick steel door, and an extensive security system with multiple surveillance cameras, a public announcement system, and a separate phone line. On the night the two move into the home, it is broken into by Junior (Jared Leto), the previous owner’s grandson; Burnham (Forest Whitaker), an employee of the residence’s security company; and Raoul (Dwight Yoakam), a ski mask-wearing gunman recruited by Junior. The three are after $3 million in bearer bonds, which are locked inside a floor safe in the panic room.

Although it’s often touted as a psychological thriller (and it is just that), I tend to think of Panic Room as more a siege film than anything else. It’s a battle if wits and, to a degree, endurance, as Foster and Stewart sit inside what may well be a concrete coffin while their assailants, led by the terrific Dwight Yoakam and abetted by a sympathetic Forest Whitaker. I’ve long had the opinion that this is one of Whitaker’s finest performances (although I haven’t seen The Last King Of Scotland yet, so there’s that…) and revisiting this film again only reaffirms that belief; Panic Room is filled with motivation and character, the kind which sees the audience treated to a story that is anything but straight-forward.

Key to the film, obviously, is Jodie Foster, who is dealing with her divorce, and although she came on board the project late (replacing Nicole Kidman, who had a recurrence of an injury suffered whilst filming Moulin Rouge and unfortunately having to withdraw deep into pre-production) you’d never guess. Foster is terrific here, giving Meg a genuine sense of helplessness mixed with eventual steely resolve. Her motherly attachment to Kristen Stewart is warm and naturalistic (Foster herself became pregnant during production, forcing the film to halt mid-way through), and you get the sense that they had a nice relationship on set. Unlike her turn in the Twilight franchise a few years later, Stewart is excellent here, her emotive, physically draining role demanding more of her than any dalliance with a vampire. 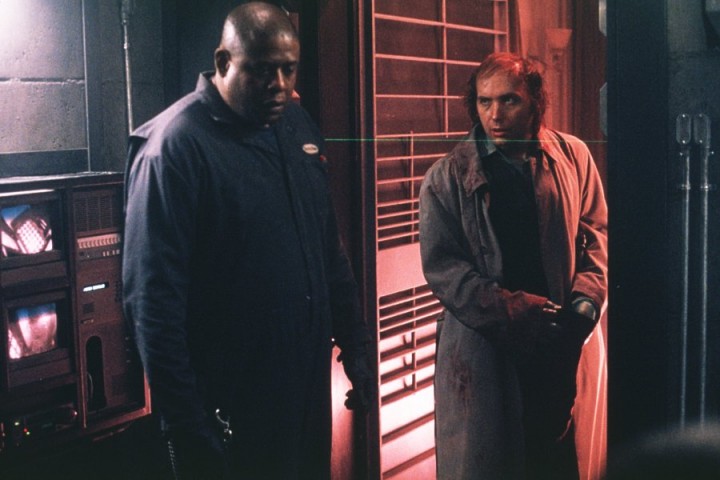 Whitaker, as mentioned, is also excellent, while Yoakam, and a lesser extent Jared Leto, are up to the standard the film demands. Yoakam is a blast as the sadistic, cruel, murderous Raoul, and if I’m honest I kinda wondered why his acting career didn’t take off further after this and his previous film, Slingblade, in which he played an odious, contemptible screen villain. Guess he kinda went with the music career, which is our loss. The man just oozes evil, hidden as it is by his laconic style.

The film’s MacGuffin, of a hidden treasure known by Whitaker’s Burnham and unknown by Meg, is less important to the film that Fincher’s filming of it. Panic Room is a masterclass in intimate, one-set design and superb camerawork and technical detail. There’s almost no shot in this film which doesn’t look like it wasn’t planned several months prior to the cameras rolling, so you’d imagine “improv” wasn’t a key aspect of Fincher’s method here – the script by David Koepp, who was riding a huge crest of creative popularity during this period, is razor sharp and crucially deceptive, peeling its onion-skin twists and turns with assured strength and balancing the plot mechanics with character development just brilliantly. Fincher’s camera sweeps and swoops through the house, around the titular panic room and between cracks, crevices and nearly the very DNA of the building, as Fincher’s slowly ratcheting tension builds and builds. It’s enormously Hitchockian, this film, from its insular, taut setting and all-too-human premise (greed, basically), and I think were the master alive to see this film he’d feel mighty miffed he wasn’t the one to direct it. There’s a lot of Rope in Panic Room, a film I think Fincher borrows the technical aspects from, while Hitch’s Rear Window is the most tonally parallel film in the actual execution.

That’s not to say this film is a rip-off, because it most definitely holds its own. As Sarah’s life-and-death predicament winds up, the fingernails-on-chalkboard tension throttles excess through Fincher’s narrow-focused lens of sweat, claustrophobia and fear; aided, in part, by Conrad Hall and Darius Khondji’s superb cinematography. Howard Shore’s understated score only rams home the subtle, laser-like intensity of what transpires within the story. 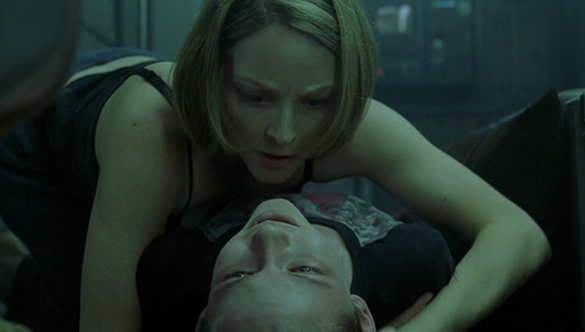 Panic Room isn’t a film given a lot of discussion these days, at least not in my experience. This is a shame, because in all of Fincher’s oeuvre to-date, I think this one is the most fun. It’s certainly the most intense, with the possible exception of Fight Club, although for different reasons. Echoes of Zemeckis abound in this film, and while that’s meant as a compliment it could also be somewhat insulting – I think Fincher outdoes Zemeckis’ equally technical What Lies Beneath, beating the director at his own lairizing game and keeping audiences on the edge of their seats throughout.

Panic Room is a taut, effortlessly brilliant experience in tension and fear, the kind of white-knuckle ride you only experience on the big screen, and a ride that doesn’t leave the central house involved for a second. Basically, it’s a one-set play, given the cinematic treatment. Directed with magnificent ferocity by Fincher, and showcasing some truly remarkable performances by the cast, Panic Room is a Fincher film I think deserves a load more respect than that which it currently receives.