Director :  John McTiernan
Year Of Release :  1993
Principal Cast :  Arnold Schwarzenegger, Charles Dance, Austin O’Brien, Robert Prosky, F Murray Abraham, Tom Noonan, Frank McRae, Anthony Quinn, Bridgette Wilson, Mercedes Ruehl, Art Carney, Ian McKellan.
Approx Running Time :  131 Minutes
Synopsis:   With the help of a magic ticket, a young film fan is transported into the fictional world of his favorite action film character.
What we think :   Probably the ultimate meta-film, Last Action Hero is one of those movies you can imagine a group of writers sitting around a room spitballing the weirdest ideas and then making that film. Although critically blasted on release, and suffering some admittedly tepid moments of asinine “action”, the film remains a cult favorite, and easily one of Arnie’s most memorable movies – even if it’s for all the wrong reasons.

I’ve got a magic tiiiiicket!

Last Action Hero is a film grossly and unfairly castigated. A cinematic struggle with duality, Hero’s bombing at the box office displayed a complete disregard for now-commonplace meta references and in-jokes, subtle wink-wink humor for the audience, that I think people weren’t quite ready for. Featuring the second most annoying child actor to appear with Arnie in consecutive years (Austin O’Brien is this film’s Edward Furlong, and just as annoying), Last Action Hero has a lot going for it, but too much working against it to manufacture a film of complete enjoyment. 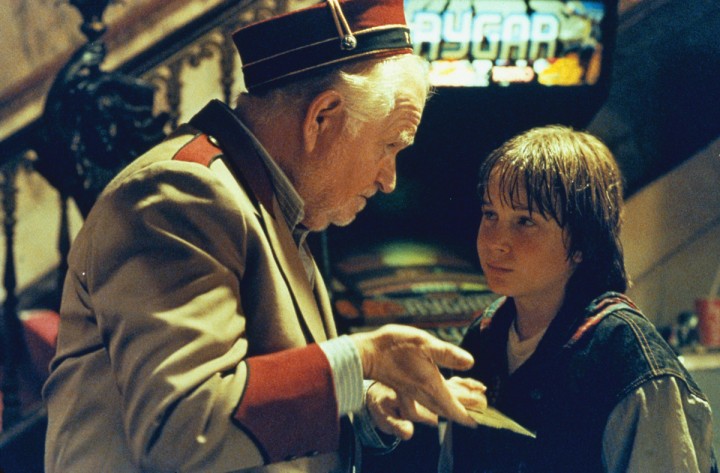 The film centers around young Danny Madigan (O’Brien), a young kid who adores action franchise Jack Slater, with Slater played by Arnold Schwarzenegger. One day, Danny acquires a mysterious “golden ticket”, a magic Macguffin which can transport the boy into the movies he loves so much. During a screening of the latest Jack Slater film, Danny suddenly finds himself inside the movie, conversing with the “action” Arnie and his on-screen daughter, Whitney (Bridgette Wilson), while escaping the plans of screen villain Benedict (a terrific Charles Dance). Escaping Jack Slater VI, Danny and the on-screen Jack arrive in “our” world, the real one, followed soon after by various other film characters – including Death from Bergman’s The Seventh Seal, played by future Magneto and Gandalf, Ian McKellan – to cause crazy action-world carnage within our own.

Last Action Hero is one of those films that should never have failed. The premise is simply too awesome. Problematic production issues stemming from studio meddling in the script stages meant that a large portion of the film’s comedic elements are smothered by a frankly all-too-frightening realism that focuses on the “this ain’t a dream” tone of the real world Danny lives in. The film-within-a-film-within-a-film comedy is terrific, but when Danny and Arnie’s Jack Slater arrive in “our” world, the film’s nasty overtures negate much of the enjoyment of the overall product. It’s hilarious to watch Arnie play a Generic Action Hero with such a straight face – as the character Jack Slater, Arnie is an unkillable, unstoppable force of wooden acting, gut-busting one-liners, terrible plot contrivances and bad writing, and the world he inhabits is filled with all the action cliches we’ve become accustomed to. The film is a riff on the action genre, a light poking of fun at an entire industry of film-making that makes its living making the impossible seem possible. 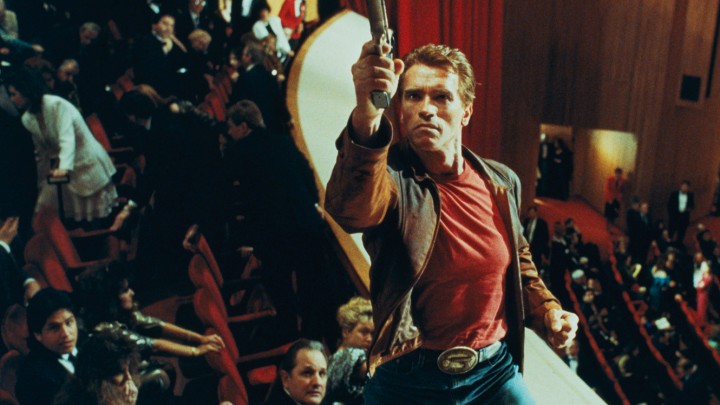 I really enjoy this film; I always have, even though it’s a film that struggles with its own identity. If it were made today, I suspect it would have Edgar Wright behind the camera and vastly different tone, but action maestro John McTiernan (Die Hard, Predator) gives it his all and mostly succeeds. The self-referencing of action archetypes and tropes makes for engaging, usually hilarious viewing – the film’s a long-running spot-the-cameo gag reel of action stars, well before The Expendables did it for real; everyone from Sharon Stone, Robert Patrick, Jean Claude Van Damme and even Sly Stallone (in a subtle reference to their “feud”, as a stand-up poster assuming the Governator’s role in Terminator 2) make an appearance. Not to mention, Arnie’s liberal ability to poke fun at his own larger-than-life screen persona; the “film” version of Hamlet, played by skull crushing, cigar chomping fictional Arnie is laughably awesome, and it’s use in the film’s trailer probably helped boost the all-too-dismal box office.

So if you’re an Arnie fan, you’ll have seen this and probably enjoyed it, in spite of its inherent Naked Gun-esque sense of humor. But the film runs aground with a weirdly mean-spirited tone that lumbers the fun with a decidedly dull subplot. Charles Dance, who plays the film’s central villain – he discovers the magic ticket’s powers and escapes the “movie world” into the “real world”, causing incredible havoc and making it seem like such a Machiavellian adventure – is encumbered to make the movie’s bad guy element a significant player here. By contrast to his “action film” role, Dance’s actions in “our” world have long lasting effect. Cars don’t necessarily explode the minute you shoot them, but people do stay very dead, and things stay very destroyed. Although I can see why the film tries to give Dance’s character a legitimate sense of authoritarian cruelty and malevolence, somehow it doesn’t jibe with the majority of the film’s playfulness, leaving audiences wondering just how seriously to take it all.

For me, however, the film’s main problem is young Austin O’Brien, who plays the crucial role of Danny. O’Brien’s a typical child-actor; he’s a smart-ass, he’s mostly wooden, and his character isn’t as well rounded as it needs to be to sell his fantasies and his real-world troubles. He’s the eponymous “kid star” of a film, and with that comes all the pitfalls a wooden kid actor can bring. He’s a step above Edward Furlong’s screechy performance in Arnie’s smash hit Terminator 2 (released the year prior), but not by a lot. Although O’Brien tries his hardest, and is undoubtedly the best of the bunch the film-makers saw before the cameras rolled, I always found (and still do) O’Brien’s performance to be the most ruinous factor of Last Action Hero’s problematic mechanics.

Last Action Hero sells its wares easily – it’s big on explosive, dynamite action, what with action genius McTeirnan behind the camera, and the in-joke ratio is higher than any film before or since, but the mismatched “fantasy” and “real” world collision doesn’t work well. You get the sense of a better film lurking somewhere in there, but on the whole it’s too ironic and masturbatory for its own good. Sinking beneath a mismatch of good-natured humor and legitimately scary evil, Last Action Hero’s best moment (in which F Murray Abraham’s character is called out for “murdering Mozart”) is the poster-child for all that’s wrong with it. You finish watching this and sit there with a wistful, “if only” feeling that it could have been so much better.