Director :  Carol Reed
Year Of Release :   1949
Principal Cast :   Joseph Cotten, Alida Valli, Orson Welles, Trevor Howard, Bernard Lee, Wilfrid Hyde-White, Erich Ponto, Ernst Deutsch, Seigfied Breuer, Paul Horbiger.
Approx Running Time :   104 Minutes
Synopsis:   Pulp novelist Holly Martins travels to shadowy, postwar Vienna, only to find himself investigating the mysterious death of an old friend, black-market opportunist Harry Lime.
What we think :  Considered one of the great films, The Third Man has always been a film “I’ve been meaning to get to” for a while now, at least since my review of Citizen Kane. Thankfully, a recent restoration job on the film, and its release on BluRay, have allowed me to appraise this vaunted masterpiece in the high definition it deserves. Starring Joseph Cotten and Orson Welles (among others), Carol Reed’s production is hugely atmospheric, a pointed noir film that is almost Hitchockian in both tone and underlying malevolence. Terrific acting, superb use of bombed-out post-war Vienna as a setting, and some of the most astonishing camerawork I’ve seen in a film touching 70 years of age, The Third Man is an uncompromising gem.

As I’ve acknowledged many times around this site, my appreciation for older films, films designated as classics dating back to the early half of the 20th Century, is relatively poor. Over the last few years, however, I’ve been trying to slot a few of what folks consider “must see” films into my crammed viewing schedule in order to not only improve my own understanding of cinematic history, but also cultural importance. Twenty years ago I’d have looked at The Third Man and probably not given it much thought – I’d certainly never have written a review for it – but these days, after being able to appreciate the period aesthetic of films from the 30’s and 40’s now that I’m more mature in my film ventures, I can honestly say it’s one of the best films I’ve seen. Period. 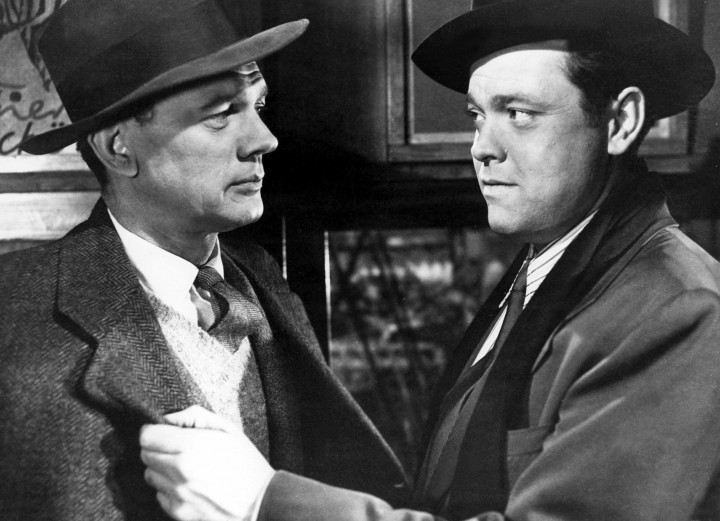 Set in post-war Vienna, American pulp author Holly Martens (Joseph Cotten) arrives in post-war Vienna to take up a job with a friend, Harry Lime (Orson Welles), only to learn that only a few days prior, Lime was struck and apparently killed by a car whilst crossing a street. Attending Lime’s funeral, Martens encounters two British officers, who declare Lime a criminal through a racketeering operation, a charge Martens disputes. Martens meets Lime’s girlfriend, an actress by the name of Anna (Alida Valli), who tries to help him clear Martens’ name, even though the authorities try to persuade him to leave Vienna. Not dissuaded, Martens follows the clues to Lime’s death, which he suspects was actually a murder. A mysterious “third man”, who was noted to be on the scene when Lime was killed, holds the key to why Lime was killed, and by whom.

One of the worries I have when approaching my initial viewing of a film considered by most to be a classic, if not one of the greatest films of all time, is that it might fail to live up to expectation. The burden of expectation is one that often brings a film down – in my experience, anyway – but I’m pleased to say that The Third Man, directed by Carol Reed and starring legendary actor Orson Welles, is exactly as good as people have often said it is. As my appreciation for classic cinema has evolved, I’m able to look beyond the often clunky visual effects or stagey, theatrical acting styles, to delve further into the story and characters, and The Third Man offers plenty of grist for the mill in that regard. 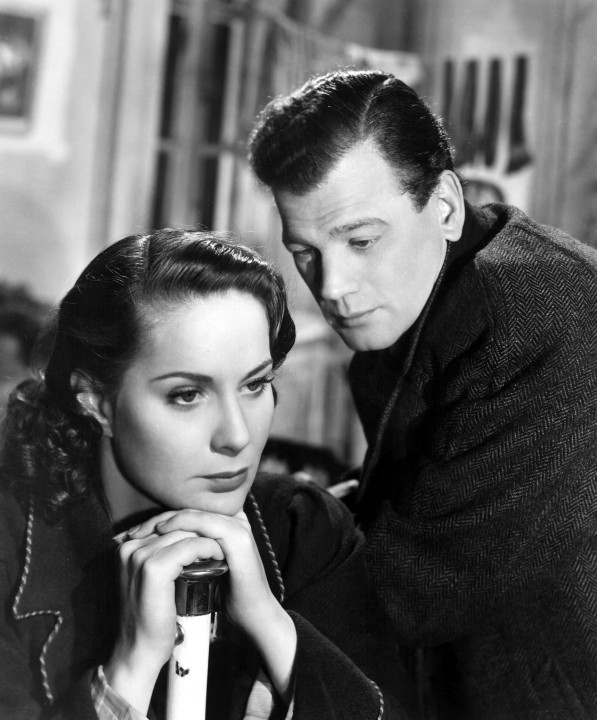 With a screenplay by legendary author Graham Greene, The Third Man is a superbly realized mystery thriller, laced with undertones of romance and violence, a seething menace beneath the fairly romantic visage of Viennese cartography. Layered in subtext and some absorbing character roles – even the second and third-tier ones – make this a compelling dramatic work even over its hypnotic technical proficiency. Joseph Cotten is the lead actor, as Martens, and his role of a down-on-his-luck author trying to uncover what happened to his friend, and the actor has a likeable screen charisma. His relationship with Anna is particularly sweet, obviously harboring some feelings for her even though she remains loyal to the deceased Harry. Alida Valli is gorgeous, alluring, but yet hiding a pained regret that she’s even in the situation she’s in, as Anna. Although I found Anna to be the most frustrating part of the film, Valli’s performance is still excellent.

In the film’s famous twist, Lime isn’t dead (sorry, spoilers!) but turns up in the visage of Orson Welles, in what must be the most minor leading role I’ve yet seen in a film of this vintage. Welles only appears in the film about an hour in, and aside from a momentary scene above Vienna in a ferris-wheel, spends most of the film running and hiding in the shadows and rank of the Viennese sewer system. Hardly “leading man” status, but as Lime gives the character a particularly menacing, almost cocksure attitude that runs him into conflict with the more accommodating Martens. 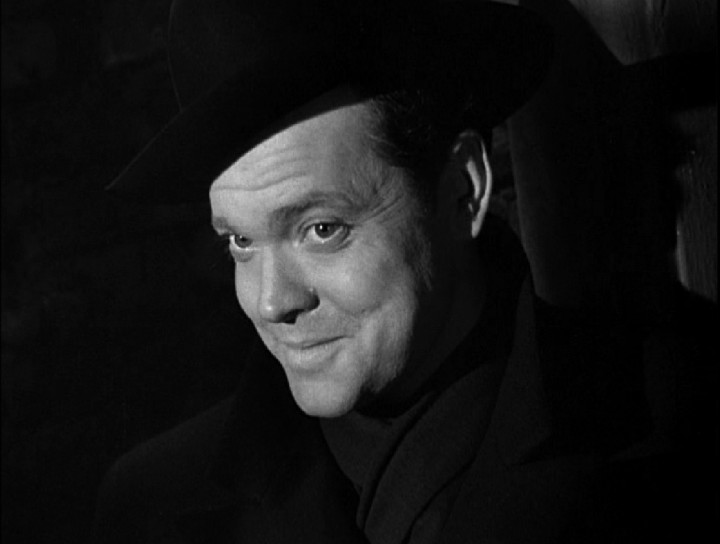 The story of why Lime is such a wanted individual is a tad confusing, at least with regards to the urgency and level of criminality the authorities hold him, but something about stolen penicillin during the Allied controlled period of Vienna following the end of World War II, and children with meningitis, make the seriousness of Lime’s crimes obliquely understated.

Story aside, the film is pure pulp noir thriller. The 1949 release date might indicate a technical level that modern audiences won’t be used to – or even interested in – but The Third Man works on so many visual levels it’s almost worth re-watching immediately to capture everything Carol Reed crams into the frame. From his awesome use of Dutch angles, where the camera is tilted off horizontal to achieve a sense of off-kilter, deep focus framing, to the brilliant cinematography – filmed in black and white – and lighting, The Third Man is a masterclass in visual style and skill from Carol Reed. I admit that this is only the second of Reed’s films I’ve seen (everyone’s seen Oliver!), and it strikes me greatly that much of his work here has echoes of Orson Welles’ own work on Citizen Kane only 8 years prior. 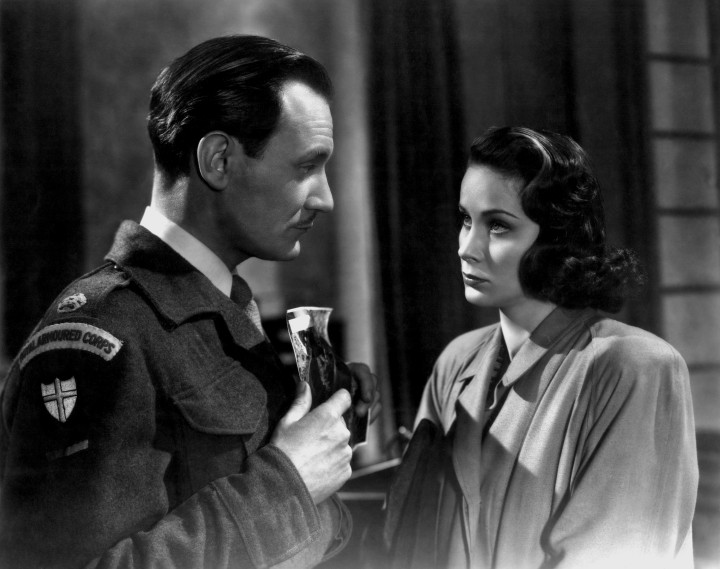 From Reed’s use of focus across the frame, to his use of shadow and light, the magnificent depiction of Vienna (still rebuilding following the Nazi occupation during the War, and bombed considerably, and, by the way, occupied by a number of Allied powers both at the time of the film’s production and in the years following – Switzerland was annexed by the Nazi’s, and only returned to sovereign status in 1955) is atmospheric and utterly un-romantic. The way Reed fills up the Academy ratio (the old 4×3 aspect) is superb, giving each shot, each sequence, depth and a sense of precision that manifests in the films of Stanley Kubrick. Indeed, I had flashes of Kubrick as I watched this, thinking this is the kind of film he might have made himself if he was working in that period. At times, The Third Man is somewhat aloof towards the audience, brusquely dispatching dialogue and plot twists with uncanny efficiency. The brevity of the narrative, or at least how Reed chose to shoot it, does take some getting used to; I think this is down to the more “stagey” approach to shooting, with fewer cutaway shots to reaction than you’d typically find in modern films.

The reveals of each characters, usually with a shadow across the face disappearing as light is cast upon it, is probably considered a cliche these days, and is almost certainly hardly ever used, but in The Third Man Reed makes it part of his cinematic language. The use of heavy shadows and utter darkness, contrasted with vivid light – such as the climactic sewer chase, as well as a key scene when Welles’ Harry makes his screen debut inside a doorway, are magnificent, just magnificent. As a wannabe cinematographer myself, I marvel at the way a director can use such contrasts with such prevision, and it certainly brings a sense of impending….doom to the proceedings. The Third Man isn’t a happy film, I might add, for the people within it are still reeling from the effects of the war, the Allied occupation, and obviously the decadent humanity within the streets of a once proudly beautiful city. 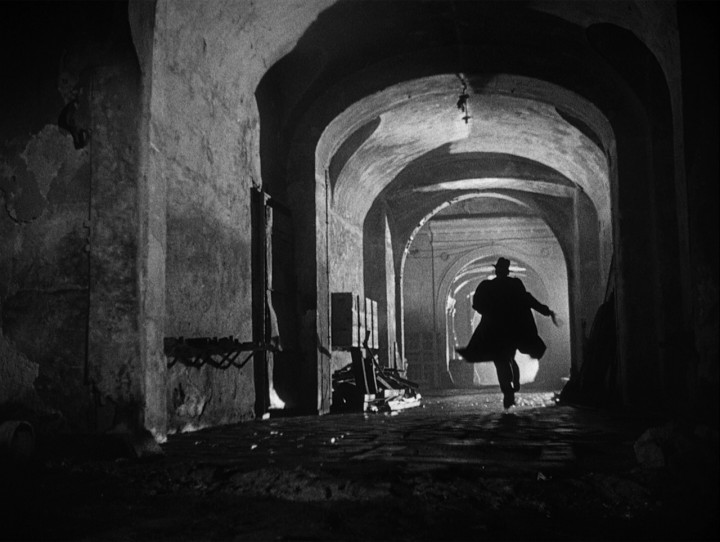 Reed opts to portray Vienna as dark and foreboding, almost oppressively so, and even the daylight sequences have a flat, almost deadening weight to them. It’s certainly a powerful film from a purely visual standpoint. This is echoed in the sadness of each character within the story itself, and by the end even the upright Martens is also brought down by the intrinsic elegiac emotion the film personifies. And that final shot, with Anna walking from the Vienna cemetery towards, and then past, a waiting Martens, is probably the most heartbreaking moment in the film. A single, unbroken shot lasting around a full minute, perfectly captures the essence of The Third Man’s downcast motif.

Inasmuch as The Third Man is a product of its time, it’s also a timeless piece of period storytelling, an opus of Viennese opulence and grim, postwar melancholy, told with shadowy menace through a lens of American consternation, and is indeed one of the great films of all time. Moody, atmospheric, designed to perfection and edited with utter precision, The Third Man never once puts a foot wrong in giving a terrific account of itself. One of those rare cases where everything in it just works, just clicks.