Director :  Stanley Kubrick
Year Of Release :  1987
Principal Cast :  Matthew Modine, Vincent D’Onofrio, R Lee Ermey, Arliss Howard, Adam Baldwin, Dorian Harewood, Kevyn Major Howard, Ed O’Ross, John Terry.
Approx Running Time :   116 Minutes
Synopsis:   A pragmatic U.S. Marine observes the dehumanizing effects the U.S.-Vietnam War has on his fellow recruits from their brutal boot camp training to the bloody street fighting in Hue.
What we think :  Outstanding war film is a tale of two halves: the first, a dehumanizing assault on all that’s good and clean about men becoming soldiers, and the second, a brutal – if somewhat muddled – assault on the senses as those recruits are thrust into combat in Vietnam. R Lee Ermey’s performance is Oscar-caliber (sadly, not nominated), and the film’s opening half is some of the most scintillating regimental emotional carnage ever inflicted upon an audience.

These boots were made for walkin’.

Seven years after the success of The Shining, director Stanley Kubrick turned his gaze upon the horror of war, ostensibly a serious version considering the black humor of his previous hit, Dr Strangelove. Full Metal Jacket was Kubrick’s attempt at breaking down the… well, breaking down of men during combat, as well as the less likely subject of the good ol’ American Boot Camp. Based on the semi-autobiographical novel by former US Marine Corpsman Gustav Hasford entitled “The Short-Timers”, Kubrick, together with screenwriter Michael Herr and Hasford, crafted a film of two distinct halves, echoing the work of the original novel’s duology of narrative. Set during the Vietnam War, and featuring a young, inexperienced cast, Full metal Jacket would go on to become a film mentioned in the same heaving breaths as Apocalypse Now and Platoon, Saving Private Ryan and All Quiet On The Western Front, as a classic of the anti-war genre. Although hindered by a disadvantageous, meandering second half, the film retains its potency thanks to a gallant central performance by Matthew Modine, and superb bit-roles to D’Onofrio, Ermey, Adam Baldwin and Arliss Howard, among others. 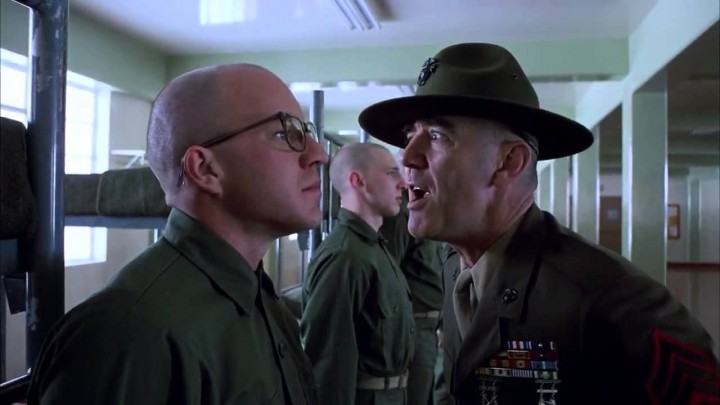 In 1967, during the war in Vietnam, a group of new recruits to the US Marine Corp arrive at basic training, where they’re under the control of Gunnery Sergeant Hartman (R Lee Ermey), a hard-ass instructor who berates, harangues, harasses and obliterates the humanity out of the young men until they become well drilled soldiers. Among them, Private James “Joker” Davis (Matthew Modine), Private Leonard “Gomer Pyle” Lawrence (Vincent D’Onofrio), and Private Robert “Cowboy” Evans (Arliss Howard). Leonard appears to suffer from some emotional or mental deficiency, making him an unrelenting target of Hartman’s bile and anger. As the platoon haze Leonard for causing them undue grief, the young man eventually snaps, taking extreme action to stop further bullying from the belligerent drill instructor. Later, after Joker is assigned to the Army as a war correspondent, going into battle with other soldiers to report back to the military and to the documentary crews on the ground there. As he spends time inside the front lines, he discovers that who the enemy is isn’t entirely clear, and the war’s effect on the young boys filled with promise back in America has become one of degradation, dehumanization, and ultimately, death.

From its opening scene of a Vietnamese hooker walking past a group of relaxing soldiers to the sounds of Nancy Sinatra’s “These Boots Are Made For Walking”, to the close of Joker walking with the wounded to the strains of Disney’s Mouseketeers club song, Full Metal Jacket is an early example of the contrast of human depravity and human joy. The gritty, hideous overtones of death and a moral abyss are apparent throughout the film, from R Lee Ermey’s filibustering debasement of the young men in his platoon, to the pockmarked ruins of Hue in its infamous battle during 1968, Kubrick’s smooth camerawork and detached style are almost as soulless as the eyes of the combatants still standing by the end; the ripe use of a children’s song to close the film is among the more poignant moments of the movie. Of a movie filled with them. 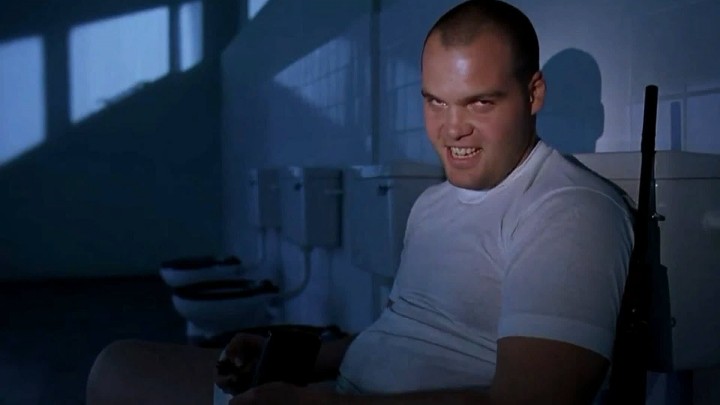 Tackling the film in its two-half construction, the opening half is easily the better. Led by the towering presence of Ermey (who, by rights, should have snagged more than a few acting gongs, but sadly, only managed a Golden Globe nomination and an award from the Boston Film Critics Association) and abetted by Modine’s insouciant Joker, and a terrific D’Onofrio, the opening hour or so of Full Metal Jacket is a tour-de-force of Kubrick’s writing, sublime direction, and performance. As with most of Kubrick’s later films, the stylistic “tracking shot” Kubrick made famous in The Shining is reprized notably here, especially during the forced marches and parade ground jogging (“I don’t know what you’ve been told” has never sounded so dispiriting), while the framing is once more symmetrical where possible inside the barracks.

The best part of the opening half is Ermey’s dialogue, a barrage of insults and abuse that, while we watch on grinning with its wry humor, is no doubt meant to inspire abhorrence at the treatment these boys endure – and they are boys, usually fresh out of college or off the streets, and although attitude amongst them is visible early, it’s beaten out of them in relatively short order. Ermey’s wide-eyed performance is one to behold, and as legend has it is one of the very few acting performances Kubrick allowed to be largely improvised on his films. A blistering assault on decency, mangling bodily fluid, excrement, racial profiling and all manner of utterly un-PC language into the verbals to mentally break down the boys for the living weapons they would become. Ermey’s on-screen sparring partner is the sotto-voiced D’Onofio, whose commanding utterances as the unfortunately named Gomer Pyle – a bumbling fool – are haunting and inescapably sad. His final fate, as with that of Ermey’s Hartman, are both shocking and terrifying for their brutality and swift execution. The entire first half builds to their confrontation – although Hartman’s attitude to Leonard’s gun-toting antics isn’t as self-preserving as I’d have expected – and the explosive result of that brings the film into it’s more melancholy phase. 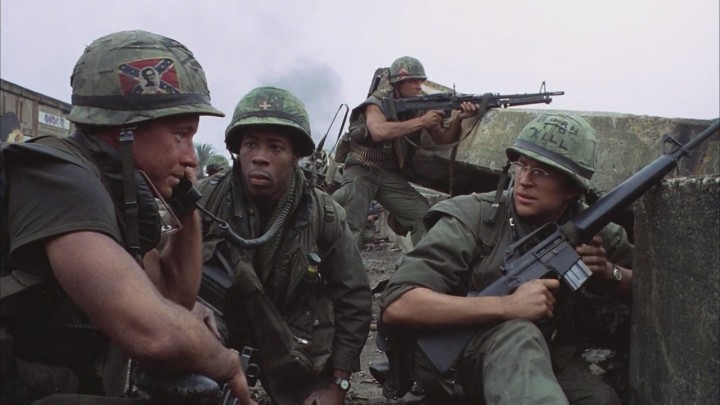 Immediately, we find ourselves on the front line, with sweaty, dusty, weary soldiers flitting between bomb craters and destroyed infrastructure in combat. The film begins to take on a nightmarish indifference to our viewpoint, in many ways, marking time with the soldiers as they camp, move, wait, and fight while trying hard not to bond with each other lest they be killed. It’s a typical “war is shit” scenario, as told through a Kubrickian lens, and although the horror of the second half doesn’t seem to resound with the ferocity of the first, it’s not through lack of effort. The film was shot in England, due to Kubrick’s obsessive fear of flying (so, no trip to Hollywood, then) and while these days you can kinda see the scaffolding of production design off in the distance, the effect Kubrick was able to achieve is nothing short of astonishing. The ruined buildings are on a scale similar to those in Private Ryan, and the combative action, while not as visceral as modern war films have since become, is still largely impactful.

The problem with the film’s second act is that Modine’s character doesn’t sit into the story as well as he should, and the supporting roster feel like a grab-bag of war cliches spread out amidst the framework. Sure, several of the character’s stick out (Arliss Howard and Adam Baldwin, particularly), but the emotional crux of the film becomes lost amid the mud and bullets. Whereas we truly felt for the guys during their boot camp stint, here they seem to become simply humans with hats, waiting to be shot, with minimal genuine development among them. 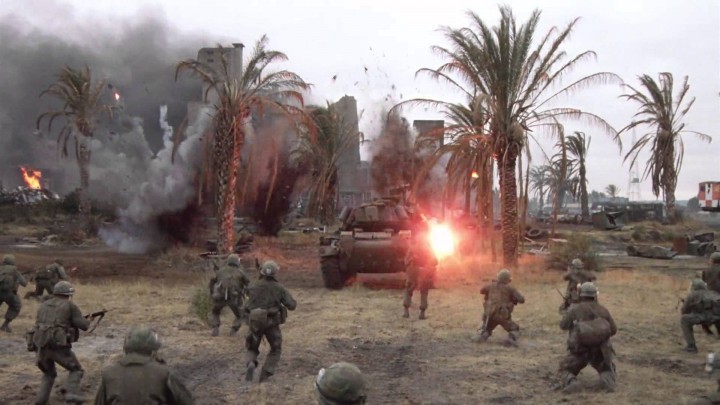 Instead, I think Kubrick tries to show us how war changes people, how it desensitizes people to their own feelings and emotions, something Veterans have long advocated governments for help to reconcile, and in this sense the film works splendidly. But there’s a slow-moving shadow across the narrative that hampers the pacing and gravitas of events unfolding on screen. Perhaps Kubrick intended the men depicted here to simply be seen as cannon fodder, due to their expendable nature? I’m not sure, but I felt like the latter half of the film, which is at times action-packed and at others, slow and languid, a bit emotionally uneven.

In saying that, however, I’m giving short thrift to what is overall a marvelous piece of war film-making. As far as depicting the horrors of military life (seriously, why people would willingly sign up after seen this movie I’ll never know) and the inhuman aspects of military combat (which, in hindsight, would become normalized newsreel footage for the 24-hour news cycle in the decades to come, thus desensitizing people to it even further!), Full Metal Jacket is a brave, powerful, beautifully rendered indictment on the evils man inflicts upon men.