Director :  Peter Weir
Year Of Release :   1998
Principal Cast :  Jim Carrey, Ed Harris, Laura Linney, Noah Emmerich, Natascha McElhone, Brian Delate, Holland Taylor, Paul Giamatti, Peter Krause.
Approx Running Time :   103 Minutes
Synopsis:   An insurance salesman/adjuster discovers his entire life is actually a T.V. show.
What we think :   Peter Weir’s fabulous meditation on “reality television” (what a scourge) is cinematic delight, thanks to a tremendously emotive performance from Jim Carrey, a ripping supporting role from Laura Linney, and a fascinating script from Gattaca helmer Andrew Niccol. Featuring terrific production design and a glorious score by Phillip Glass (evoking shades of Vangelis, occasionally), The Truman Show hasn’t aged a day and reminds us all that we’re merely consumers of product, passive and flock-like, which is something uncomfortably prescient given the proliferation of the reality genre all these years later.

On the air. Unaware.

At the time The Truman Show was released, the reality television genre was nowhere near as prolific as it is now – now, entire channels are dedicated to insipid crap designed to reflect society back upon itself: shows such as the X-Factor/Idol templates, the Big Brother, the Duck Dynasty and Pawn Star shows – not to mention those ubiquitous Kardashians – highlight just how desperate people are to fill the gaping void in their lives with unmitigated trash simply to pass the time. Nope, not a fan. The pre-milennial Truman Show is something of a precursor to what would become almost passe today, a 24-hour channel dedicated to the ultimate social experiment, and although human rights advocates would no doubt find the reality of this scenario utterly deplorable, in cinematic fiction it provides us with an intellectual “think piece” designed to offer moral and ethical trip hazards to make us think. 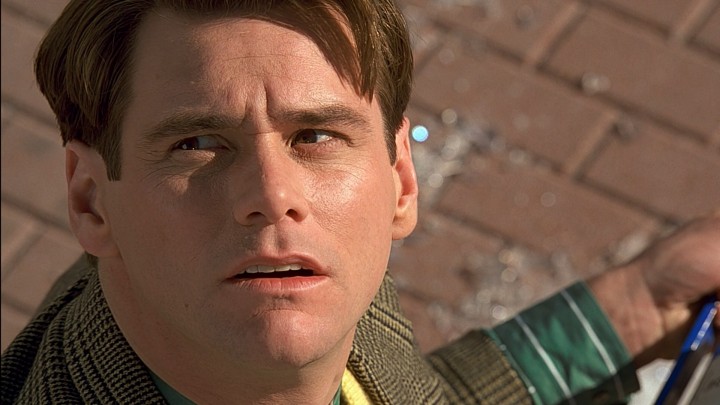 Plot synopsis courtesy Wikipedia: Truman Burbank (Jim Carrey) is the unsuspecting star of The Truman Show, a reality television program in which his entire life, since before birth, is filmed by thousands of hidden cameras, 24 hours a day, 7 days a week, and is broadcast live around the world. The show’s creator and executive producer Christof (Ed Harris) is able to capture Truman’s real emotion and human behavior when put in certain situations. Truman’s hometown of Seahaven is a complete set built under a giant arcological dome in the Los Angeles area. Truman’s family – wife Meryl, played by Laura Linney – and friends – best friend Louis is played by Noah Emmerich – are all played by actors, allowing Christof to control every aspect of Truman’s life. Events transpire, however, to give Truman a glimpse outside his world, a world he begins to believe isn’t all he can see. As he decides to try and “escape” Seahaven, Christof’s plans to prevent him offer a catalyst for Truman’s sense of self worth and identity – plus, it makes riveting television.

The late 90’s were a productive time for Hollywood’s copycats. Most people remember the clash of Antz and A Bug’s Life, as well as Deep Impact and Armageddon, all released within the same 12 months, and almost pound for pound containing similar ideas or concepts. Notably, The Truman Show represents the first round in a reality television exam salvo, with the release the following year of EDtv, a film starring Matthew McConaughey as a redneck idiot put onto a live 24-hour TV program and broadcast across the country. Of the two, The Truman Show remains the most influential, if only for Peter Weir’s terrific direction and a razor-sharp script by Andrew Niccol (Good Kill). Ron Howard’s EDtv is good, don’t get me wrong, but it’s more about the fame and fantasy than Truman’s escarpment-scaling narrative tenor. 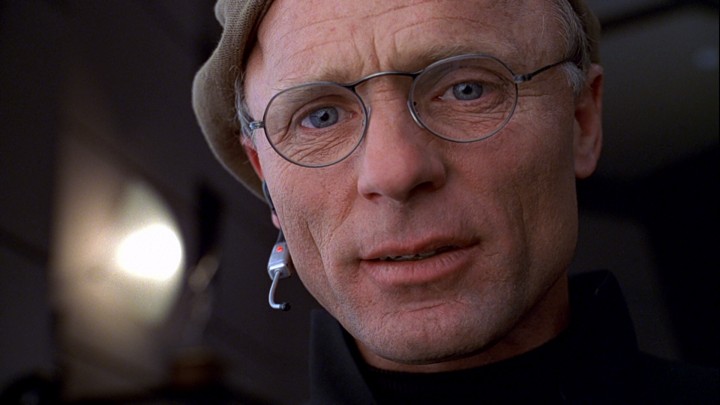 The premise works on a number of levels. My favorite element is just how indoctrinated Truman is into the world he knows – it’s the only world he knows, and although he suspects something’s wrong somewhere, he has no basis for comparison and so simply ignores or avoids whatever problems the program throws up at him. If you had no idea about the outside world, and had lived in one house your entire life, what would happen were you to be suddenly made aware? Who do you trust? Truman’s gradual realization that everyone, from his “wife” to his best friend and all his co-workers and fellow Seahaven denizens, are all actors, is one of those moments that makes the film so crystallizing, so epochal in examining the human condition. Naturally, humans need to explore their surroundings, and yet Christof’s show is designed to prevent that (the idea of a massive town-sized sound stage built into Los Angeles is hilarious were it not for the knowledge that somebody probably had the idea of actually doing this for real at some stage) leading to inevitable frustration and breakdown.

Andrew Niccol’s script is superb, giving Truman a humanity (essayed with panache by Jim Carrey, who was on a hot-streak of success by this time) and a vulnerability in which we, the audience, want to see him break free of his television prison. One can argue a case for Christof’s claim to “own” Truman, but the film tackles the “owning a human” narrative with subversive tact, never bashing the viewer with it but rather allowing actions to speak up in place of dialogue. Naturally, the idea of how far the actors surrounding Truman all go for their work, particularly Laura Linney’s Meryl – her character’s real name is Hannah Gill, an actress pretending to be Truman’s wife, which is why she keeps spruiking products to-camera as a way of the show generating revenue – isn’t explained too clearly, but you get the sense that the regular cast are all practically on-hand 24 hours a day to interact with whatever Truman does. 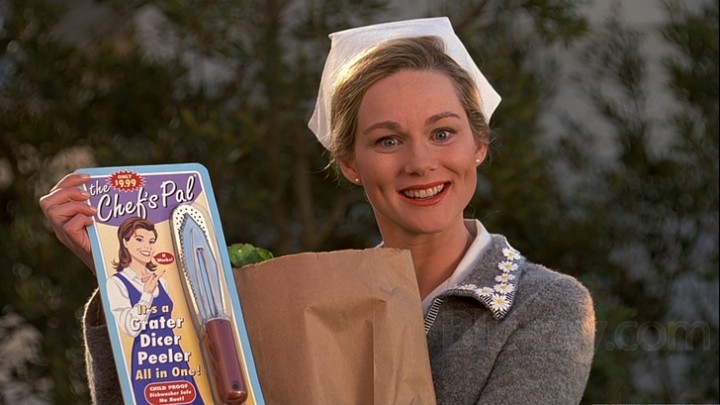 The show deals with grief with profundity. Truman’s on-screen father was killed off in a tragic boating accident deigned by Christof to make the man deathly afraid of water – Seahaven is surrounded by water with only one bridge leading off the “island” – which makes Truman’s dreams of travel more flights of fancy than practical reality. The loss of his father is a key moment which drives Truman to want to explore his world, to live the life he’s dreamed of instead of being stuck in Seahaven. The removal of his first love, an extra named Sylvia (a luminous Natascha McElhone), in order for Truman to marry the woman cast as his wife (talk about manipulation, wow) is also a catalyst for change, as Truman continues to dream about her throughout his time on the show. Shown to us, however, is a glimpse into the group who wish Truman to be free of his incarceration, a group who infiltrate the set and cause all manner of commotion around Truman in order to make him see it’s not real. Sylvia is among those who joins this group after her removal from the show.

Truman’s tragedy is only counterpointed by a naturally euphoric sense of purpose, as his life begins to unravel (for the better, although he doesn’t know it) and the show begins its endgame. Truman’s final voyage across the “sea” to what eventually is revealed as the outer edge of the set, is a moment of symbolic human success, as his boat is pummeled by the artificial storms and waves orchestrated by Christof in the control room high above. This catharsis, which follows a delirious run through Seahaven wreaking havoc on the actors and sets as he slowly uncovers the “holes” in Christof’s meticulously organized production, is euphoric. 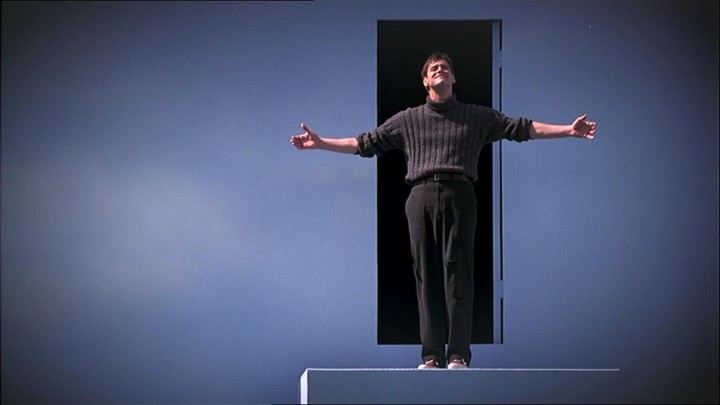 The cast are uniformly excellent, although I will say it does seem an awful lot like Ed Harris thought he was appearing in a different film. Jim Carrey is excellent, restraining his outlandish humor to provide Truman with nuance and depth, while Laura Linney’s blistering breakdown at a crucial moment is particularly heartbreaking – she’s just an actor playing a role here, and her “character” to be the wife is obviously taking its toll – while Noah Emmerich’s best friend is as affable and nonchalant as you like. But Ed Harris’ Christof feels like it was written for a different actor, or at least isn’t suited to Harris’ style. Christof is essentially the show’s God, an all knowing, all seeing controller of Truman’s world, and I think Harris struggled with the character’s motivations and arc in the way he deals with the way Truman effectively ruins his own show. Truman’s his baby, he’s a father figure to the man, and yet Christof is quite happy to kill Truman in the final storm sequence just to prevent his escape. The motivation for this isn’t as clearly defined as the rest of the film’s characters.

The Truman Show is a remarkable film for what it delivers in terms of emotional heft, and substantive forecasting on the role of reality television in our society. The film inserts a variety of “viewers” of the show, all interacting with each other in relation to what they’re seeing, and this reflective element allows us to glimpse within us how we’d view a show like Truman. Accompanied by a wonderful Phillip Glass score, Peter Weir’s direction here is superb, with a handle on visual effects that are seamless and production value that’s especially enveloping. I loved this film back then, and I continue to do so now – and there’s not a damn Kardashian in sight. Thank God.