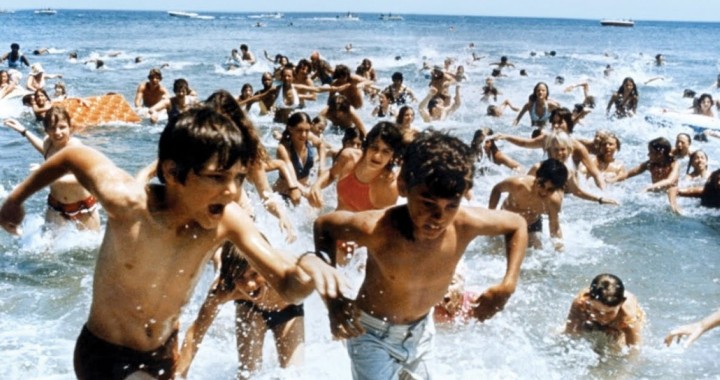 Director :  Steven Spielberg
Year Of Release :   1975
Principal Cast :  Roy Scheider, Robert Shaw, Richard Dreyfuss, Lorraine Gary, Murray Hamilton, Carl Gottlieb, Jeffrey Kramer, Susan Backlinie.
Approx Running Time :   124 Minutes
Synopsis:   When a gigantic great white shark begins to menace the small island community of Amity, a police chief, a marine scientist and grizzled fisherman set out to stop it.
What we think : Incalculably iconic, redefining cinema, and a putting director Steven Spielberg on The Map (with a capital M), Jaws is as effectively chilling now as it was 40 years ago. Legendary production issues and creative side-thinking by Spielberg led Jaws to become one of the first films to coin the term “blockbuster” in any way; the impact Jaws had on Hollywood was profound, and continues to be felt today. Although the franchise was diluted by a series of increasingly insipid sequels (although Jaws 2 isn’t horrible), the original film remains a powerful reminder of how terrifying the great unknown can truly be.

Don’t go into the water today.

It’s highly likely that in the entire history of cinema, only two pieces of music have become so synonymous with the feelings of dread and terror they evoke, most people probably haven’t even seen the films they’re from. Bernard Hermann’s screeching “ee ee ee ee” from Psycho, and John Williams’ “Daa dum, daa dum” from Jaws have entered the cultural vernacular as shorthand for impending death or horror, personifying the power of those pieces of music removed even from the visuals they accompany. Steven Spielberg’s sophomore feature (technically his third after TV movie Duel, and debut US release The Sugarland Express) has transformed from blockbuster phenomenon to legitimate classic in the forty years it’s been since release; my original feelings towards the film’s lo-fi look and knuckle-clenching terror initially made me think of it as a “horror” film, with the shark as the Big Bad Slasher Killer, but in the years since it’s morphed into something entirely different. 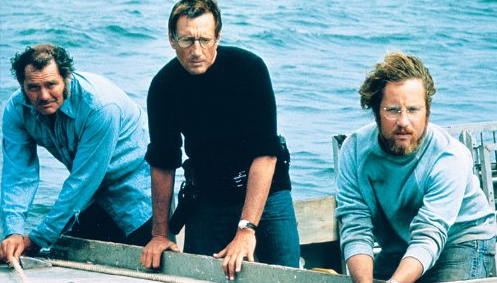 Amity Island, a holiday destination during the summer months, is about to have a serious case of shark. Local police chief, Martin Brody (Roy Scheider) is called to the scene of a grisly death involving a local girl. His investigation indicates she was killed by a shark, which is problematic because the tourists are soon due to arrive and if they can’t swim in the water, the town’s economy could be affected. With the local mayor (Murray Hamilton) pressuring him to wrap the case up quickly, and more encounters with the watery menace quickly cause a panic within the island’s population. After his son is nearly taken, Chief Brody calls in a shark expert, biologist Matt Hooper (Richard Dreyfuss), and professional shark hunter Quint (Robert Shaw), to go out into the ocean and catch the animal before the tourists go away and never come back.

Jaws is a magnificent film, there’s no denying. Drawing its chills from a fear so primal, so inbuilt into our DNA, Jaws works on levels so base and so instinctual it’s little wonder the film continues to be held in such high esteem so long after its cinematic debut. The themes within the film attach to our fear of water, of an unseen, natural menace that we cannot control. On multiple levels, Jaws’ themes of predation and animals encroaching on territory we perceive as “ours”, as well as a thing that doesn’t answer to our laws because it’s an animal, work superbly well. The titular shark remains unseen for large portions of the film, save for the now iconic fin breaching the water’s surface signaling impending doom, which only adds to its mystique and that ethereal “unknown” fear. Our minds make the shark dangerous because our imagination gives us the rows of razor-sharp teeth and powerful crushing jaws; it’s a concept Spielberg was forced into because the prop shark made for the film often didn’t work when it was supposed to, meaning the director had to use the creature as minimally on the screen as possible. 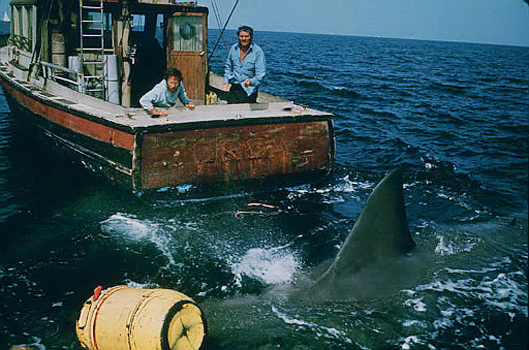 That “primal” element to the film comes with a subgenre of horror involving animal attacks, because animals are purely instinctual and cannot be reasoned with like a human can. Frankly, I’ve never been a fan of the open sea for the very reason Jaws makes clear – we don’t always know what’s beneath the surface, and our inclination to worry about possibly drowning probably doesn’t help either. Jaws is so powerful in its terror beneath the waves, the sequel built on that with its own tag-line, “just when you thought it was safe to go back in the water”, a nod to the distinct drop in beach-goers that summer (and for several summers after) following the film’s release.

The film, which is based on the novel by Peter Benchley, revolves entirely around the trio of Roy Scheider, Richard Dreyfuss, and screen icon Robert Shaw. Each personifying elements of humanity that regard sharks as terrifying, beautiful, unstoppable apex predator; Scheider’s Chief Brody represents the Everyman element, who have to face their fear through overcoming unimaginable terror in an area so far beyond his expertise (and experience) he’s a virtual novice. Dreyfuss’ Matt Hooper is the exposition – he knows sharks at a scientific level, understands their habits and potential, and becomes our eyes and ears into the mind of how a shark works. Lastly, Robert Shaw’s most iconic performance as Quint, the salty sea-dog captain of the Orca, a boat inevitably ill-equipped to take on the massive Great White shark encountered in this film, although we wouldn’t realize this until late in the movie. Shaw provides the mystique, the romance of a shark’s brilliant lethality. 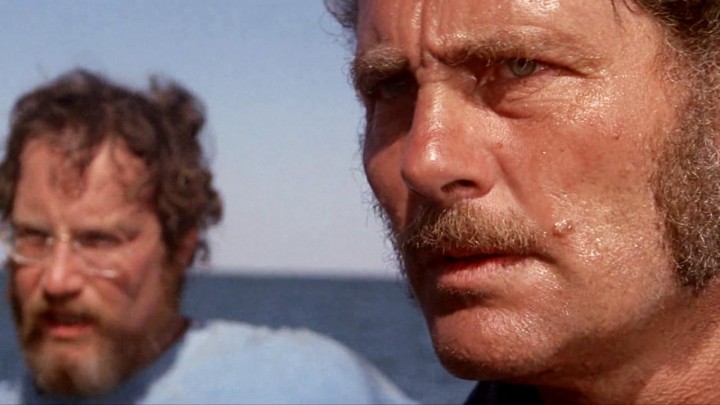 All three are brilliant here, as the film’s gut-churning tension winds up to one of the great set-pieces of modern cinema, with Brody forced to confront his fear of both sharks and water in pursuit of keeping people safe. For me, it’s Scheider’s best role, although admittedly my appreciation for him is still low considering I’ve seen only a few of his films (another being Sorcerer, which is well worth a look). Richard Dreyfuss is like a human gyroscope, swirling about the film with his wide eyes, huge grin and infectious enthusiasm – Hooper’s awe at the shark’s size and power tells us more about the stakes here than any number of scientific explanations. And Robert Shaw – well, if there’s a scene in a film which has become almost as legendary without the film it features in, Shaw’s famous “USS Indianapolis” speech, retelling a horrible tale of sailors being swarmed by sharks during a sinking in World War II, is perhaps the best. Shaw owns his sections of the film, as the gruff, take-no-shit Captain of the Orca, who underestimates the size of the shark and, almost in an analogous narrative to Moby Dick’s Captain Ahab, pays the ultimate price for his hubris.

The film is scattered with a terrific supporting cast, from Lorraine Gary as Chief Brody’s wife, who is both supportive and terrified by the plot elements the film throws up. Murray Hamilton’s mayor of Amity Island personifies the superficial bureaucrat who decries reason for cost, even if the expense is people’s lives. Hamilton isn’t so much an unlikeable character as he is stuck between commitment to the town’s survival, and the financial obligation were the shark to remain alive. Notably, it’s often the film’s first scene that people most remember – it’s indeed an iconic moment in cinema, where a nubile young lass is terrorized and then taken by the beast, only to wash up on the beach – dismembered almost beyond recognition – the next morning. The disappearance of Alex Kittner, a young boy playing on one of the island’s beaches, is heartbreaking, thanks to the performance by Lee Fiero as the boy’s distraught mother. 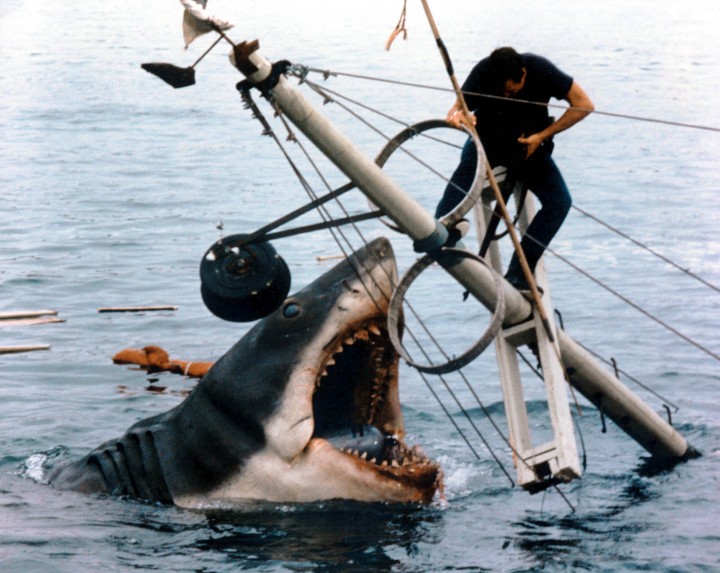 As much as Spielberg’s visuals and the cast performances sent chills through audiences, the film wouldn’t be half as effective were it not for John Williams’ game changing score. With it’s deep brass “Daa dum” motif, a recurring symbol of approaching blood and death, the film’s chilling aural hook refused to allow audiences a reprieve. The orchestral growl accompanying the shark’s approach was a broadside to audience expectation, a modern reinvention of the Psycho “ee ee ee” motif which Hitchcock used superbly barely a decade earlier. Naturally, the film isn’t entirely about the shark, and Williams’ soaring melodies when the Orca is sailing out to sea, and when the shark is being pursued, are filled with elation and a sense of purpose. Indeed, I think Jaws remains one of Williams’ best scores ever – alongside his Indiana Jones and Superman themes, the man’s work during the 70’s and 80’s for Spielberg, George Lucas and Richard Donner produced musical fruit I doubt has ever been equaled.

The effect Jaws had on cinema cannot be overstated. From it’s wide-open cinematic release, a first for a major film instead of the slow build used by studios prior to this, to its cataclysmic effect on audiences, and Spielberg’s lightning-in-a-bottle direction, Jaws was a pivotal moment in Hollywood history that, unlike many films to follow remains as potent a force for entertainment now as it did on debut. Led by a terrific cast, some astute writing and an “in the shadows” villain, Jaws is scintillating, skin-crawling, euphoric carnage and joy that still makes me afraid to dip a toe into the ocean.