Director :  Quentin Tarantino
Year Of Release :  2004
Principal Cast :  Uma Thurman, David Carradine, Daryl Hannah, Michael Madsen, Lucy Liu, Vivica A Fox, Gordon Liu, Michael Parks, Bo Svenson, Jeannie Epper, Samuel L Jackson, Larry Bishop, Sid Haig, Perla Haney-Jardine.
Approx Running Time :   136 Minutes
Synopsis:   The Bride continues her quest of vengeance against her former boss and lover Bill, the reclusive bouncer Budd and the treacherous, one-eyed Elle.
What we think : Although it sputters a bit in its crucial final act, Tarantino’s masterclass in action-genre filmmaking continues apace in Volume 2 of his Kill Bill saga. Led by an unstoppable Uma Thurman (who, I might add, is better here than she was in Volume 1) and aided by support from both Michael Madsen (I know, who’da thunk it?) and David Carradine, Volume 2 delivers high energy fights, some dogged trials-by-fire and a vast misstep in the finale. Still, an epic conclusion to an epic revenge saga.

So I went to see Kill Bill Volume 1, and thought it was one of the most enjoyable Tarantino films of the director’s short career. Boasting a technical proficiency that surprised me, the opening salvo of the man’s revenge saga (based on classic vengeance films of bygone eras) was a stylish, bloody, hyper-violent cast-o-thousands delivering some of the most beautifully choreographed carnage seen to that point in mainstream film. So you’d go along to the second part, Volume 2, with high expectations that the story would continue appropriately. I remember being disappointed upon leaving the cinema after seeing Volume 2, because my expectation hadn’t been met, and even in the years immediately after its DVD release, I still felt it to be one of Tarantino’s weaker film efforts. Volume 2 of the Kill Bill saga has plenty of bloody action, and delivers a terrific coup-de-grace for the villain and the rest of the Bride’s enemies, but it’s way more talky than I wanted, and spent more time talking about being cool than… you know, actually being cool. It’s been several years since I sat down to Uma Thurman’s final bow as the Bride, and in reviewing this film I had prepared in my mind to continue to be disappointed. So how well does Kill Bill Volume 2 stack up, compared to its sister film and to QT’s film oeuvre overall? 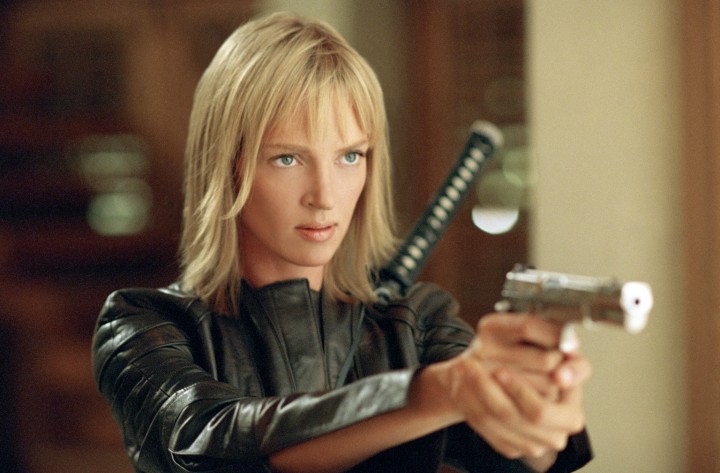 The Bride (Uma Thurman) has dispatched two of the people on her revenge list – O-Ren Ishii (Lucy Liu) and Vernita Green (Vivica A Fox) – from the five who tried to take her life after showing up at her wedding. Continuing to hunt down Bud (Michael Madsen), the Bride is surprised and buried in a coffin, apparently unable to escape. But escape she does, thanks to her training by venerable martial arts master Pai Mei (Gordon Liu); meanwhile, former boss/lover Bill (David Carradine) sends Elle Driver (Daryl Hannah) to Buds place to make sure the Bride is dead, and the two engage in a brawl. Inevitably, the Bride locates Bill, and confronts him about why he tried to kill her, and the truth about her apparently “dead” daughter.

For about 90 minutes of it’s 2+ hour runtime, Volume 2 is fantastic, and easily on par with the entirety of Volume 1. The Bride’s revenge trip is masterfully woven between strip joints, six feet beneath the Earth, in-the-desert caravans and, eventually, Bill’s Mexican abode. The narrative continues in much the same pulp-inspired manner of the earlier film, intercutting storylines and flashbacks and using a multitude of visual cues to maximize impact. Although the story wanders off into secondary stories – the Bride’s training under the tutelage of Pai Mei, for example – and many of Tarantino’s peccadilloes come to play late in the movie, Volume 2 remains a terrifically visceral treat, and one I look forward to revisiting again soon.

If there’s a weakness to Volume 2, and taking into account about how brilliant the first 90 minutes are, it’s the last 40 minutes. The whole saga has been building to the Bride’s confrontation with Bill (I mean, it’s literally in the title of the movie) and when it comes….. well, meh. Pregnant pauses, manipulated slam-doggery dialogue, ripe examinations of everything from superhero alter-egos to punctuated misogyny and sexism, and although it does come to an end with style, the lopsided mediocrity of the film’s concluding sequence undoes most of Tarantino’s work in the earlier part of the film. As grand a time as I had with Volume 1 and most of Volume 2, the finale of this film just felt too manufactured by comparison. Hell, that’s as good an explanation as I’ve got for you. 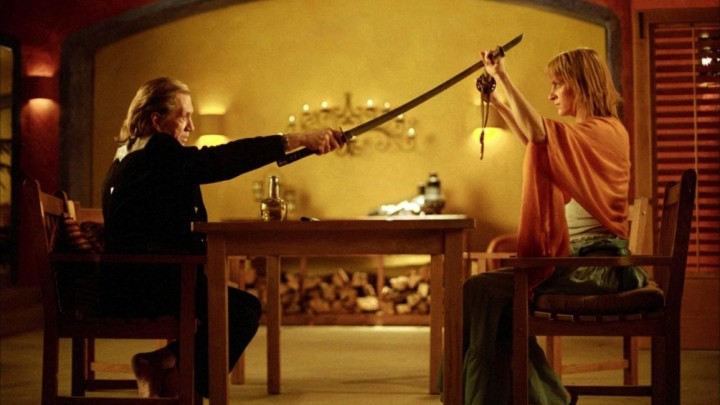 As with the previous installment, Volume 2 delights in a mixture of styles and visual cues from Tarantino’s grab-bag of tricks. A flashback sequence, detailing the events leading to the film’s plot in the first place, is shot in glorious black and white, while Tarantino’s use of a 4:3 ratio to echo the Bride’s viewpoint whilst briefly hogtied in the back of a truck is clever. Volume 2 is easily Michael Madsen’s time to shine, and as Bud (who, I forgot, was Bill’s brother!) he delivers a terrific performance as the slimy, skanky, trashy bouncer who buries the Bride alive. Madsen’s normally an actor I have little time for, largely due to his lamentable career choices generally, but here, it would seem Tarantino has crafted a role specifically suited to his limited ability. Daryl Hannah’s one-eyed Elle Driver has her moment in the sun too, with a knock-down drag-out brawl with the Bride inside Bud’s camper trailer. As with Volume 1’s astonishingly bravura fight sequences, Volume 2’s don’t leave you wondering about QT’s ability to craft a fight scene.

Notable secondary performances include Gordon Liu, who you may recall played a gangster in the Crazy 88’s in Volume 1, here playing the pivotal role of Pai Mei. Liu’s mean-streak character notes are both hilarious and frustrating, but he does well with that incredible white beard. Spot horror film uber-star Sid Haig as a bartender, Larry Bishop as Bud’s sleazy strip-joint boss, Chris Nelson as the Bride’s intended husband during the ill-fated wedding sequence (and a cameo by Tarantino alumni Sam Jackson), and Clark Middleton’s memorable role as one of Bud’s mates who helps to dig the Bride’s grave. Oh, and Michael Parks also pulls double duty here, as a Mexican pimp the Bride seeks information from. 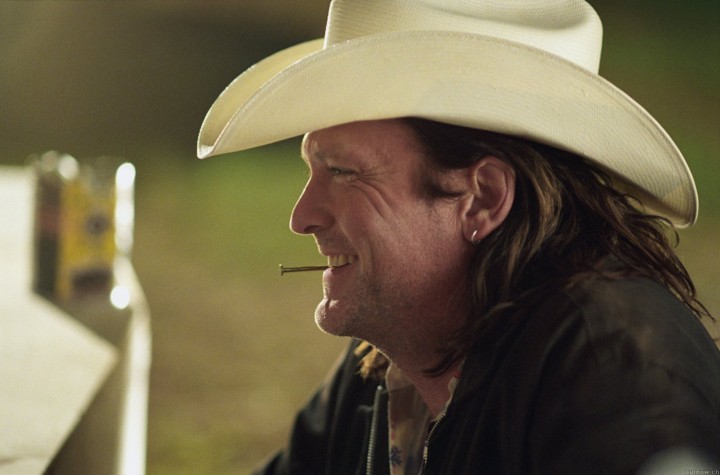 As much as some might call Tarantino a plagiarist for “homaging” most of his material from other films, and referencing pop-culture through both his script and through the visuals he presents on screen, it takes balls to pull it all together with as much style and class as he does here. Kill Bill – in its entirety – shows the strength of the man’s ability to push himself visually, and to craft a story that works as both a kinda jokey parody and a violent, self-contained thrill ride, each without compromising the other. I think the man’s work here is a huge step up from what he accomplished in his pre-Bill phase; let’s not forget the indie-grunge quality of Reservoir Dogs, or the electrifying frisson of pulp-grunge Pulp Fiction, or the throwaway juice of Jackie Brown – Kill Bill is a totality of the accomplishment of all three of those films, a honing of the man’s writing (excepting the finale, of course,) and his acuity behind the camera.

If I’m honest, I think the dual volume release of Kill Bill works against the story somewhat, at least in terms of fluidity of narrative between movies. Tarantino released both installments subsequently in a version dubbed “The Whole Bloody Affair”, which produced the full four-hour version, and if that version was readily available I’d be inclined to purchase it, if only to see how Tarantino splices it back together. Undoubtedly, the Kill Bill project was intended to be seen in its glorious fullness, a sad fact that commercial interests couldn’t overcome (although, both Bill films came out within 12 months of Peter Jackson’s Lord Of The Rings finale, so a four hour film wasn’t unique….) but, as it stands, Volume 2’s deficiencies in its crucial final act don’t dent the original misgivings I had about it way back in 2004. I admit, I think the majority of the film is on par with Volume 1, but that ending…. man, I still feel gypped.