Director :   James Whannell
Year Of Release :   2015
Principal Cast :  Lin Shaye, Dermot Mulroney, Stefanie Scott, Angus Sampson, Lee Whannell, Hayley Kiyoko, Michael Reid MacKay, Tate Berney, Tom Gallop, Phyllis Applegate, Steve Coulter, Tom Fitzpatrick.
Approx Running Time :   97 Minutes
Synopsis: A prequel set before the haunting of the Lambert family that reveals how gifted psychic Elise Rainier reluctantly agrees to use her ability to contact the dead in order to help a teenage girl who has been targeted by a dangerous supernatural entity.
What we think :  Well mounted horror prequel delivers plenty of nice chills, some decent scares (albeit easy to spot a mile away), and character who aren’t total imbeciles. Thankfully, Chapter 3 of the Insidious franchise sees the saga return to form from the debacle of the first sequel, and although I can’t see why you’d want to continue (I think the concept has now run its course), if you’re ending with this one it’s not a bad way to go out.

He’s in your room. Right now. That’s him knocking. You hear it?

The horror genre has had something of a resurgence in recent times, with several successful films reinvigorating what most people though a tired and depleted concept. The “demons from beyond” subplot of horror, which was mined with great effect in Insidious, and less effectively in Insidious 2, has often run afoul of inept characterization and/or routine, implacable entities designed purely to shock rather than inspire or terrify. While I’d hardly call Insidious Chapter 3 a modern classic, like films such as The Babadook or It Follows, it has a wonderful sense of solidity about it that is impressive indeed. 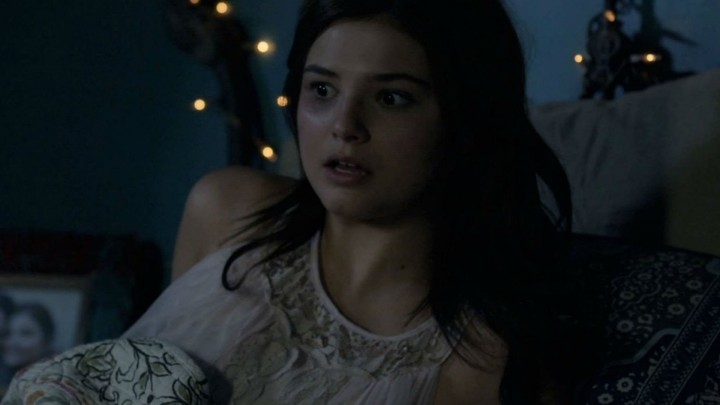 Quinn Brenner (Stefenie Scott) approaches psychic Elise (Lin Shaye) to communicate with her recently deceased mother. Upon realizing that Quinn is being targeted by a supernatural entity, Elise refuses, telling the grieving girl to return home and not to communicate with the dead. Quinn’s father, Sean (Dermot Mulroney), is working hard to support his kids now that his wife is gone, but both Quinn and her brother, Alex (Tate Berney) are typically self sufficient. After having an accident after a theater audition, Quinn is confined to her house, having both her legs in casts. But the malevolent entity returns, leading her Sean to bring in a duo of paranormal investigators – Specs (Leigh Whannell) and Tucker (Angus Sampson), who soon realize that they’re outmatched by whatever it is that’s haunting the family.

As somebody who found Insidious generally okay, and the sequel a bit of a shambles, Insidious Chapter 3 at least returns things to their rightful equilibrium – it’s a good film, not a great one, and considering where the horror genre normally sits, that’s surprising. As a prequel, it does lose a little bit of tension considering we know stars Lin Shaye, Leigh Whannell and Angus Sampson, who all reprise their roles once more, survive to the other films anyway. But on the whole, the film’s clever “originating” of Shaye’s Elise and the boys’ relationship, together with setting the parameters of the franchise, doesn’t overwhelm the specific haunting narrative on the go here. The film dwells in sadness, that of a family having lost their wife and mother, while Elise’s tragic backstory, involving her late husband, accentuates the sense of loss permeating through the story. 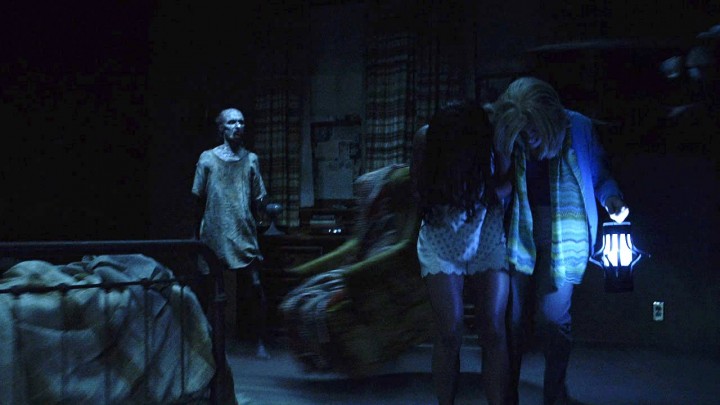 Although Whannell’s script and direction do lack that real enveloping sense of dread, the debut helmer provides the film with plenty of spine-tingling moments of outright horror, usually through darkened shadow jump-scares and gotcha boo-moments, but he keeps it “real” in the sense that the Brenner family aren’t idiots. Neither Sean nor Quinn do anything silly, such as forgetting to turn on the lights or keeping the door unlocked, and their reactions to the events of the film feel genuine and never contrived; a lot of other film directors could take cues from Chapter 3. There’s a sense of family about the film, the characters each given just enough personality and nuance to imbue them with empathy – Quinn’s mourning her mother, Sean feels like his life is spinning out of control, while Elise’s lament to her husband (which allows a moving scene later in the movie to work well) is especially nice considering I felt her to be the least worthwhile character in the franchise.

Whannell, who stepped in to direct when his mate James Wan went off to make Furious 7, has a good handle on what makes effective scares, and as with the previous films the score is appropriately moody and skin-crawling. But it’s the jump-scares that work sorta-kinda well, although most of them are a little too telegraphed beforehand to really sell the moment like it could. That’s not to say Whannell’s direction isn’t without style – a car rundown is particularly effective, as is an attack by the entity that leaves our heroine in near pitch blackness on the floor – but you can tell he’s not really the visual master his cohort Wan was. Still, Insidious Chapter 3 is effective when it needs to be, startling in places, and resolves the prequel story with nodding winks to the other two films. It’s not obsequious, but it’s there.

Look, Insidious Chapter 3 isn’t a horrid film – it’s certainly an improvement over Chapter 2 – and if anything the film contains more character development than we’ve seen thus far in Whannell’s writing, and so in that sense I think it’s a more complete film in terms of where the leads go from start to finish with their emotional arcs. The film has a palpable dread hanging over it, and pleasingly it doesn’t spend too long setting up idiotic scare sequences with implausible character stupidity. It’s punchy, does the job, and lingers briefly in the mind once the credits roll. For that, I applaud Whannell for making a threequel that works well.