Director :   Ken Scott
Year Of Release :   2015
Principal Cast :  Vince Vaughn, Tom Wilkinson, Dave Franco, Sienna Miller, James Marsden, Nick Frost, June Diane Raphael, Ella Anderson, Britton Sear.
Approx Running Time :  91 Minutes
Synopsis:  A hard-working small business owner and his two associates travel to Europe to close the most important deal of their lives. But what began as a routine business trip goes off the rails in every way imaginable – and unimaginable.
What we think :  Rightfully a bomb, Unfinished Business promises a grand ol’ “boys adventure” lark through the seedy alleys of Europe, and ends up being Vaughn thinking about his family, Wilkinson thinking about having sex with women (ugh), and Franco pretending to be mentally handicapped in some way. Whilst trying to channel the Farrelly Brothers, Ken Stott’s insipid style and Stephen Conrad’s irredeemably awful script make Unfinished Business a film you’ll struggle to finish watching. Vaughn’s career appears to be heading the same way.

In what can only be another nail in that incredibly large coffin people call “Vince Vaughn’s Career”, Unfinished Business once more reminds us all that the man’s screen persona, that glib, uber-hip patter he’s well known for, has begun to become rather tiresome. More than any other “comic” actor working today, Vaughn’s name above the title makes us all yearn for the heady days of Wedding Crashers, instead of the dire shit-pits of Delivery Man and this, the wholly unwatchable trash that is Unfinished Business. Essentially a boys-own Road Movie, Unfinished Business is lazy, rushed-to-bake cinematic turdery that elicits more groans and cringes than it does outright chuckles, and for a film so tonally wayward it’s little wonder the thing bombed. 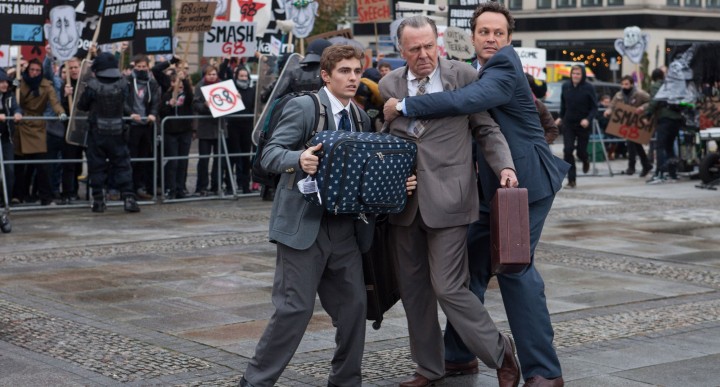 Vaughn  plays Dan Trunkman, a salesman who leaves a comfortable job to start his own business (following a run-in with his boss, Charlene – a useless Sienna Miller) and finds himself saddled with a recently fired Tim (Tom Wilkinson) and Mike Pancake (Dave Franco), a young lad who may or may not have all his marbles. Intent on grabbing a big sale to put his bullied son (Britton Sear) into a private school, Dan takes a business trip to Europe with Tim and Mike to snag a deal with an investor, following a series of ordeals with his ex-boss and another possible client, Jim Spinch (James Marsden). While in Europe, their travels don’t exactly go…. smoothly, with Dan not only booking a room at a live-art installation, but ending up organizing a deal in a gay bar’s glory-hole room. Yeah, it’s that kinda film.

Any film where one of the characters has to somehow manage to utter dialogue like “a penis touched my face” isn’t a film I’m particularly interested in, and if I’m honest, I went into Unfinished Business without a great deal of hope anyway, what with Vince Vaughn’s party-going face plastered all over the posters and advertising for this festival of shit. In what can only be described as a strange mixture of dramatic flaccidity and comedic fingernail pulling, Unfinished Business lacks either competently performed drama or chuckle-worthy humor, a film so inert in its handling of characterization it’s basically just 90 minutes of Vince Vaughn pretending to be somebody else and having all manner of “incidents” occurring to him to provoke that flippant mumble-tongue stuff he typically spouts.

Dan’s family problems – his son is being bullied at school for being a fatty, while his daughter is caught beating up kids who pick on her older brother – are mild to say the least; normally these kinds of films have the “hero” contending with an unsatisfied wife or girlfriend or something, so I guess for steering away from the familiar you have to give the movie props, but not many. Poor June Rapahel, as Dan’s wife, spends most of the film acting into a phone or a laptop screen, which reduces her to “token woman” on this entire venture.

Not to mention Sienna Miller as Dan’s “arch nemesis”, the misogynistically named “Chuck”, who spends the film being a bitch, and whose comeuppance isn’t worth the time it took to type this sentence. Nick Frost has a whale of a time dressing in a leather BDSM outfit for a scene in a gay bar (and if that’s his real penis coming through a glory hole at one point, then he’s definitely committed to the part!), and both Tom Wilkinson and Dave Franco look like they’d both rather be somewhere else for the entire film. Wilkinson especially feels out of place here, and you can tell by the way he grimaces through much of the dialogue he’s less than thrilled by what director Ken Scott has asked him to do. Take that paycheck and run, Tom.

The few running gags the film handles are just awful, lacking punch or comedic weight thanks to the script’s gormless pandering to Vaughn’s semi-confused delivery style. As a straight man, Vaughn sounds like he’s about three seconds from just flipping out and punching somebody. The film veers between Dan’s clumsy and un-earned family dramas and trashy, vulgar shock-jock film-making, where cocks and titties abound as though the production can’t quite believe the liberal attitudes to sex and nudity that many places in Europe have. An entire sequence within a steam spa, a unisex one, I might add, reeks of Hollywood’s juvenile fascination with the way Europeans see sex in much the same way we see going for a crap or collecting the mail. There’s a wink-wink nature to it all that isn’t funny, nor is it clever, it’s just stupid and utterly un-PC. It might have been hilarious in the 80’s, but if Vince Vaughn loses his shit at the sight of a sixty-ish year old woman spreading her legs in a day spa, he hasn’t visited many porn sites lately.

Constantly un-engaging (the film begins with an out-of-context argument, and doesn’t get any better) and uneven in both tone and emotional investment, Unfinished Business feels like somebody wrote a heartwarming story about a businessman trying to reconnect with his family and then got told to add more dick-and-tit jokes. Dave Franco’s retarded acting (literally, his character has a mild intellectual deficit) is offensive, Vaughn’s schtick is older than religion, and Tom Wilkinson’s apparent desire not to appear in any scenes he’s in reflect badly on the manner in which this film was crafted. This is a crass, insipid, dreary, dullard of a film, the kind of film you wish hadn’t been finished, and hopefully the last we’ll see of the interminable Vince Vaughn.