The circle of life.

It tells you something about a film’s longevity when it can spawn not one, but two animated sequels, as well as a long-running stage musical (on and off Broadway), and become a pop-culture staple for children and adults across the globe. The Lion King, coming off the back of enormous successes like The Little Mermaid, Beauty & The Beast and Aladdin, was seen by those working at Disney as a lesser film – most of the studio’s best animators wanted to work on the upcoming Pocahontas (which, incidentally, would be released the following year to significantly less box-office success), which was seen as more “important” from a social and creative aspect – and yet, thanks to its ingenious mix of the genre’s most astonishing animation, as well as a catchy, zeitgeist-punching soundtrack, it became one of the company’s most profitable and enduring canonical films. I doubt there’s a person in the English-speaking world who hasn’t seen it, or at least knows one or two of the songs, or is familiar with its intentionally earworm-ish catch cry of “Hakuna Matata”; I spent an afternoon revisiting this film for the first time with my kids, as a chance to re-appreciate a film I’d not taken the time to watch since the mid-2000’s. 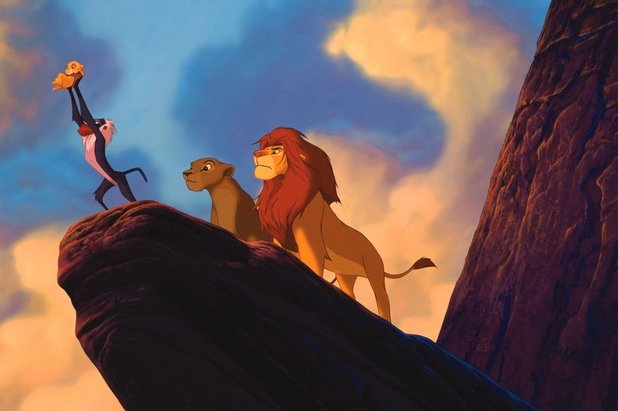 For those who don’t know the plot: Simba (voiced by Home Improvement’s Jonathan Taylor-Thomas as a youngster, and Matthew Broderick as an adult) is a lion living on the African savannah, whose father, Mufasa (James Earl Jones) is killed by his usurping brother, Scar (Jeremy Irons), in order to become king of Pride Rock. Simba believes he is the reason hsi father is dead, and at the urging of Scar, runs away, where he meets meerkat Timon (Nathan Lane) and warthog Pumba (Ernia Sabella) living in a lush tropical jungle. Years later, Simba encounters his former friend, Nala (Moira Kelly), who informs him that Scar’s rule over the pride lands has resulted in darkness and hunger, which spurs Simba to return to fight for his claim to the throne. There’s some singing, and a trio of hyenas who do some things as well.

It’s a bit sad that at some stage I had to actually consider adding a hyperlink to the Home Improvement part of my synoptic paragraph above, because I’m sure there’s folks reading this who have no idea what that show was, or that one-time heart-throb Jonathan Taylor-Thomas was on it. I digress – JTT makes a great “young Simba”, his pre-pubescent vocals giving the young lion a real sense of arrogant-but-outmatched youth that sells Simba’s later internal battles. The Lion King, irrespective of your knowledge of young Jonathan, was a gargantuan success, and remained Disney’s biggest earner until the Pixar label started to wrest control of the company’s illuminated creative reward. According to sources, the film earned just shy of a billion dollars during its theatrical run (it was re-released as a special edition in both cinemas and on DVD – which is incidentally the edition I own), on a budget of just $45 million. 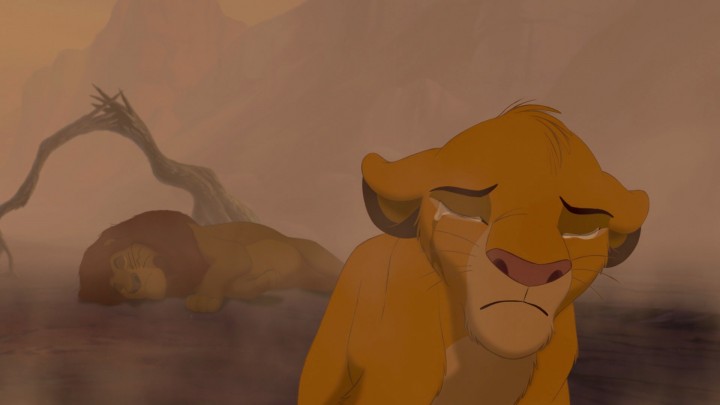 Really, The Lion King beat the odds – it played at the table, and took the house. As far as story goes, Disney’s greatest claim here was that it marked the first time a character was shown dying (or dead) on screen; traditionally, death in Disney films had usually occurred out of frame somewhere, with the characters’ reaction being the key selling point of the story. Here, Mufasa’s untimely death at the hooves of a stampede of wildebeest, following a final confrontation with Scar, is a pivotal moment of the film, not the least for its impact on a young Simba, who must reconcile his father’s death with his actions around it, and the guilt associated with this will ring true for not only kids watching, but parents as well. Guilt is a universal human emotion – injustice and wrongdoing lead us to feel some measure of guilt, and the film’s examination of innocent guilt transference (through the catalyst of Scar, as an “adult” in this scenario) is dark indeed. Particularly for a kids film.

Simba’s guilt carries the latter half of the film, and it certainly comes to bear on his eventual return to Pride Rock to confront Scar in the final act. Disney films weren’t known (then) for their deep-and-meaningful insertion of genuinely adult concepts within their movies, and yet here was a character, whom kids related to because he erroneously believed he’d done something wrong, wrangling with the guilt of that shame and fighting to preserve a lifestyle he had become accustomed to, where guilt wasn’t a concern. Analogous to us, it’s a fairly complex set of emotional algorithms for a film to embark on, but I think where The Lion King succeeds in achieving the balance between sledgehammer pounding and subtle subliminalization is with the use of the comedic Timon and Pumba.

And The Lion King is a dark Disney film, although not the first. Just watch Beauty & The Beast’s finale, where Beast confronts Gaston high atop the castle. Check out Ursula in The Little Mermaid, who keeps a worm farm of captured souls at the bottom of an oceanic trench. And at one point in Aladdin, a character makes a reference to beheading, of all things, which must have made many a parent choke back alarm as their kids turned to them and asked what that was. Disney’s Renaissance certainly ushered in a darker tone in many of their popular films; I’m of the opinion that this isn’t necessarily a bad thing, because of the times we live in and people’s insistence that we wrap our kids in cotton wool or bubble-wrap, but for those who thought Disney was all sunshine-lollipops-and-sugar-cane, it certainly marked a seismic shift in the way the studio told its stories. 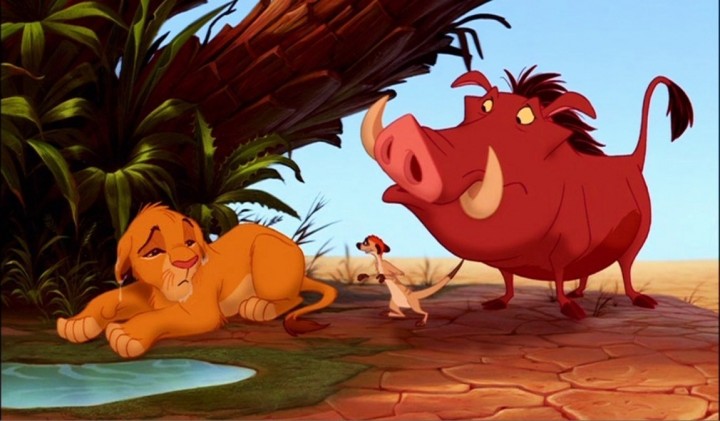 The Lion King’s darker moments come first with Mufasa’s demise, which is handled beautifully within the context of the film – we see it through the eyes of Simba, who is gutted and then terrified at what his family and fellow lions will think. Then, later in the film, Simba returns to take on Scar for control of the Pride Lands, and in fiery combat we see some rather stark, eyeball-searing iconography from the studio’s animation department, which younger kids might find frightening, even though it’s contextually on-point. And folks who say kids watching nature documentaries are exposed to this all the time? When was the last time David Attenborough chatted through a doco with an anthropomorphic meerkat or lioness? Never.

Then there’s the voice cast. Ahh, where to start. Broderick, Irons and James Earl Jones are enormously familiar voices to nearly everyone, but they really do melt into their roles here (or perhaps that’s just my over-familiarity with the film?) and inhabit the parts completely. Irons, particularly, sounds like he’s having a blast at the microphone chewing out his evil, diabolical dialogue. Broderick’s Simba seems less like a conflicted hero and more like a whiny dickhead than I remember him being – he’s the Luke Skywalker of the movie, complete with “awww, but I don’t wanna” moments and resentment at fate driving his life the way it wants. But Broderick sells the part well, also giving Simba a resolutely solid ace-up-his-sleeve in the film’s final act. Rowan Atkinson’s piping Zazu reeks of “token British stunt-casting” but the part needed a nasally whining sycophant so I guess Atkinson’s natural strident flippancy works just as well. And of course, Nathan Lane and Ernie Sabella, riffing on great comedy duos of the past as Timon and Pumba (it’s here the film works in as many fart-and-poo jokes as Disney could handle) as they provide the balance of comedy against Simba’s serious emotional monologuing. Noteworthy too is Moira Kelly’s nothing role as Simba’s romantic interest, Nala. Ergh. 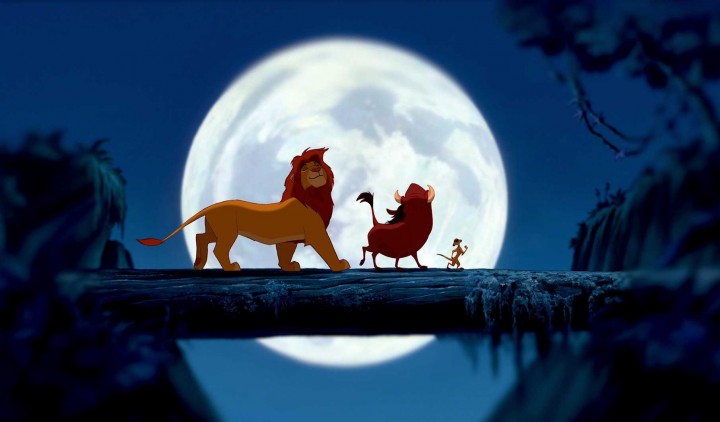 Finally, completing the trifecta of story, character and…. well, music, is the music. Hans Zimmer’s pulsating score is accompanied by a series of radio-hyped airplay-ensured songs by Tim Rice and Elton John, of which no less than three were nominated for Best Original Song at that year’s Oscars – “Can You Feel The Love Tonight” won – and two for a Grammy. The songs fuse African chants (the opening version of “Circle Of Life” remains one of the most jaw dropping examples of imagery and music ever committed to film) with modern pop sensibilities, a clever crafting of melodic and percussive rhythms that nobody could not be affected by, such was its organic, earthy origin. To-date, The Lion King’s soundtrack remains one of the most popular and highest selling animated film soundtracks of all time. And it deserves it.

Arguably one of the Disney Studio’s greatest animated achievements – easily it best modern one – The Lion King is a resounding classic in every sense of the word. People bandy that term around a little too much these days for it to have a claim of legitimacy, I guess, but this film is one that truly does deserve that title. It is a classic, a bona-fide gem of a movie that looks down upon the Disney canon to follow and scoffs at the try-hards it overshadows. If you haven’t seen it in a while, grab a copy of the special edition (it contains a new-but-inconsequential musical number just as Zazu encounters Mufasa for his “morning report”) and listen to that remixed surround sound audio track as loud as you can. As defiant as I can be that it’s probably Disney’s best since Walt passed on, I still claim it as an outright brilliant film of any kind, ever. A masterpiece.