So America’s obsession with their President, and getting him out of scrapes no human being would ever legitimately get caught up in, continues. Harrison Ford’s take on the iconic role, in Air Force One, remains a fan favorite, while actors of no less caliber than Morgan Freeman, Bill Pullman, Geena Davis and Michael Douglas have all played the part at various times. Playing the President as a fictional incumbent (as opposed to realistic depictions of actual ones, like Lincoln) allow for greater range as an actor, because they’re not restricted by a definitive personality, so when a “name” actor takes on the role in an action film, you just know he’s gonna have to be one tough hombre. Consider Samuel L Jackson, the man who once fought off a plane-load of snakes, not to mentioned assisted future-fake-President-to-be Geena Davis in The Long Kiss Goodnight, and throw him in as President. No way is LJack gonna bitch out on a role like this, especially not with his hard-ass attitude screen persona there for the teat-tugging. 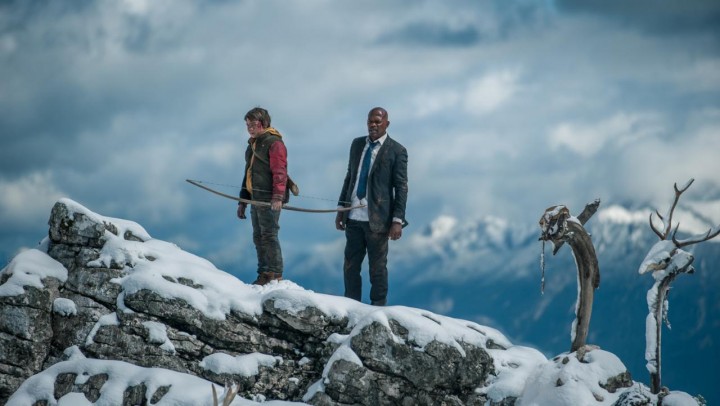 Jackson’s President William Moore is put into harms way when Air Force One is shot down over Finland, by a group of terrorists, although the President escapes the fireball in his special pod. Landing in the Finnish forrest, Moore meets local boy Oskari (Onni Tommila), who is out hunting deer to prove his maturity to his family. As the pursuing terrorists begin the chase to locate the President, Moore and Oskari must survive 24 hours alone in the alpine regions, watched via satellite by those back in Washington who are desperately working to bring him home – the Vice President (Victor Gerber), the CIA Director (Felicity Huffman) and one of the CIA’s most experienced field operatives, Herbert (Jim Broadbent).

I really liked Big Game. Sure, it’s preposterous, sure it’s filled with idiotic, logic-free plot twists and almost zero character development outside of sweaty, landscape-injected action sequences, but in its own B-grade pulp way, its flag-waving inanity and chest-beating pseudo-patriotism is as entertaining as it is stupid. Jackson’s solid performance, and Onni Tommila’s charming portrayal against him, keep this thing from sliding down one of the many mountains the film traverses both literally and figuratively. Although Onni’s acting style does struggle with the translation into English, and the young lad has a tad too little naturalism with his performance, Big Game’s buddy-actioner template is given predictable energy by Finnish helmer Jamari Helander. 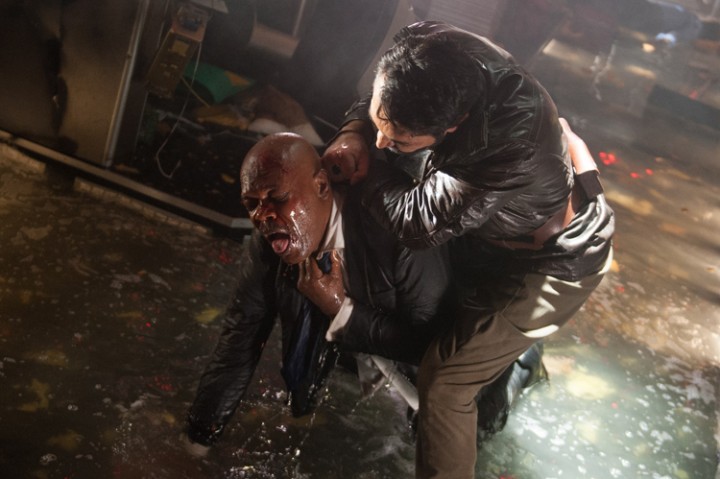 Big Game’s nonsensical plot is largely forgettable, and if I’m honest the film’s supporting characters are pretty much blank-slate caricatures (Mehmet Kurtulus’ works as chief psychopath villain Hazar has all the hallmarks of a Gary-Oldman-in-The-Professional menace, which is definitely passe but works for the film’s narrative), and the explosive action is punctuated by nice moments of chemistry between Jackson and Onni. Class actors like Ted Levine, Felicity Huffman, Jim Broadbent and Victor Gerber spend the entire film “inside the Pentagon Headquarters” – perhaps cinema’s most redundant subtitle – in a single-set location watching patently green-screened satellite displays, much like poor Glenn Close did in Air Force One.

Watching actors like this reduced to hamm-acting of this kind might fill one with a sense of regret, as Huffman and Broadbent especially are worth more than being Plot Exposition for the film’s running time, but then I guess this is a film they made purely for the paycheck. And let’s not leave out Ray Stevenson, as Morris, the President’s traitorous Secret Service agent, who uses his knowledge of the Moore’s weaknesses to aide the terrorists; it’s a square jawed performance justifiably central to the film’s betrayal plot, and Stevenson turns in a better performance than Jackson by a long shot, so there’s that.

Look, you’re not gonna get Oscar worthy film-making here, and by-and-large the film’s own idiocy makes it more laughable than thrilling or legitimately exciting. The film depends more on things like music and canny editing to sell its danger, rather than ripping dialogue or genuine sense of threat. This in itself isn’t ruinous, but it’s not exactly compelling either. Although the film makes great use of its stunning Finnish locations, with spectacular mountainous backdrops and stark blue skies, Big Game can’t overcome its narrative shortfalls – hardly a real concern when you consider the lunacy of the film’s plot and the dearth of characterization undertaken by Helander’s script. Big Game is semi-colon film-making, the kind of stop-gap project big stars take between bigger projects and one that delivers its fruity heroism with panache and style even in the face of utter absurdity.

Big Game’s hilariously bad action moments and over-ripened sense of nationalism exudes plenty of hubris and giggle-chuckle storytelling, and Helander’s visual acuity is actually really good to see (the film looks gorgeous, at the very least), but if there’s a close sequel to The Long Kiss Goodnight in Jackson’s length film career, Big Game is about it. Stupid fun, idiotic scenarios, and a winning team-up between Jackson and Onni make this a film personifying the “brain in neutral” enjoyment factor Hollywood is spectacularly good at.