Fish out of water.

As of writing this review, Finding Nemo is 12 years old. It only seems like yesterday I sat, entranced, as this film gem unspooled at the local cineplex and I was whisked into the underwater adventures of Dory, Marlin and Nemo – and a bunch of hungry seagulls – and animated films wouldn’t be the same again. Those mature enough in their understanding of the genre knew at the time we were in a new Renaissance of animated movies; Pixar had revolutionized the industry with Toy Story, and that revolution ended around 2006, with the release of the underwhelmingly familiar Cars. Finding Nemo represented the absolute pinnacle of the studio’s early output, a constantly marvelous journey across the oceans with characters we love, and scenarios so intrinsically creative it remains one of the easiest rewatch films of all time. I love this movie, let me make that as clear as I possibly can. My kids love it, and I’ve seen it countless times on DVD since that first gobsmacking cinematic experience. I know and adore it, it’s a perennial favorite, and one of the most sublime animated films ever created. 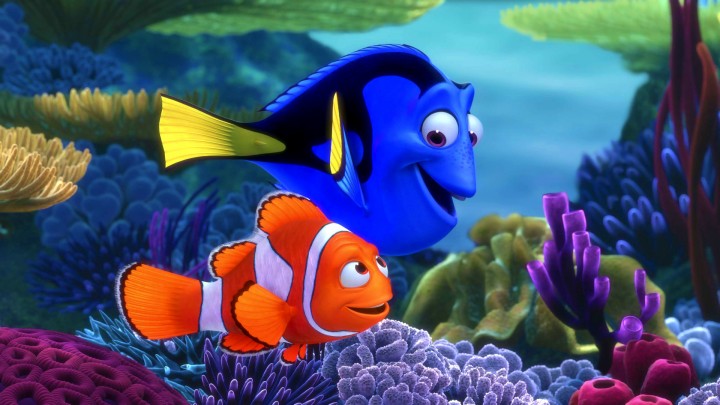 Marlin (voice of Albert Brooks) and his son Nemo (Alexander Gould) are two clown fish living out their existence in an anemone in the Great Barrier Reef. Marlin is considerably protective – almost overbearingly so – of his son, due to Nemo’s underdeveloped fin; when Dory is captured by a human diver whilst on a school excursion to the Drop Off (the edge of the reef where the ocean takes over), Marlin takes off across the ocean to rescue him. He doesn’t get far before he’s hopelessly lost, and befriends a regal blue tang with short term memory loss named Dory (Ellen DeGeneres). Dory assists Marlin track Nemo down, and in doing so form a bond that will stand up to the rigors of their adventures. Meanwhile, Nemo is put into a dentist’s aquarium, where he becomes part of a group of fellow exotic fish to live there – Gill (Willem Defoe) is the scarred leader, while Bloat (Brad Garret), Peach (Allison Janney), Deb (Vicki Lewis), Bubbles (Stephen Root), Gurgle (Austin Pendleton) and Jaques (Joe Ranft), all try and help Nemo escape and return to the ocean and to his father. This escape is expedited by the imminent arrival of the dentist’s fish-killing niece Darla.

Finding Nemo is a film near unassailable in critical acclaim. Rightly so: the story, characters, animation and all-round esteem with which it’s held by everyone – critics and casual audiences alike – are all breathtakingly superb. As a story, it touches both road-trip, buddy-comedy, chosen-one and Great Escape genres, a melding of ideas and sub-genres to create a unique film that stands alone in technical and creative superiority. 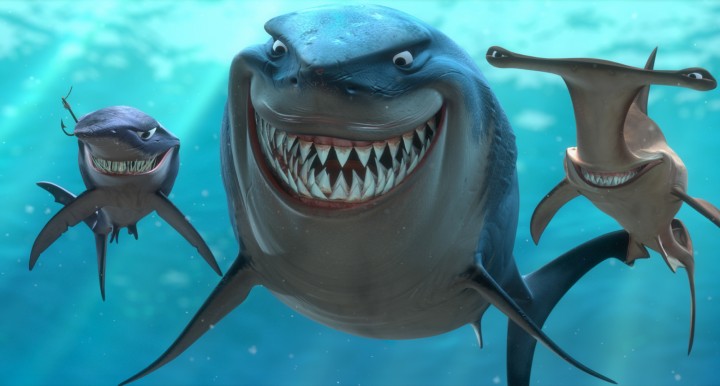 Where the heart of the story resides is in the relationship between Marlin and Nemo, a father/son dynamic that’s as old as time itself. Marlin’s an overprotective father, Nemo’s a rebellious son, and of course neither wants to give an inch. Until they’re separated by hundreds of miles, that is. The story’s aching lament on parenthood’s maze-like contortions is one that touches a nerve with those old enough to have kids, while Nemo’s upstart defiance will resonate with those young enough to have similar thoughts about their own parents, and that’s most people under the age of about twenty. The opening act, where Marlin accompanies Nemo to school (ha, get it, fish school is still called school!) before he’s fish-napped, builds up their dynamic well enough to support it across the remainder of the film’s separate narrative elements.

As Marlin traverses the ocean blue with Dory, voiced by a wonderful Ellen DeGeneres (who must have had an absolute blast with this role), his increasing frustration with her forgetfulness drives him onwards into redemptive acknowledgement that he can actually do all the things he’s been so afraid of all these years. Living a sheltered life on the off chance you’ll be eaten (like Marlin’s wife was in the rather dark opening scene – kiddies, beware) is not a life, but an existence, and the film spends a great deal of time examining this through Marlin’s gradual learning about the wider world. Nemo, meanwhile, learns about teamwork and the fact that in order to get what he wants, he must show bravery, guile, and above all, responsibility, as he earns his place in the Tank Gang’s ranks. Albert Brooks lends Marlin a tone of stuffy upper-crustiness, while Alexander Gould’s youthful Nemo is as on-point a child performance as you can expect. 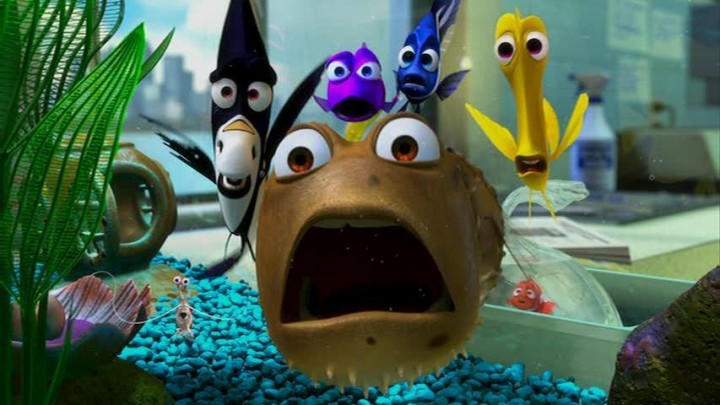 I remember reading somewhere that the production team behind the animation on Finding Nemo actually had to make their ocean setting less realistic, in order to sell the idea that this was an animated film. Hard to imagine an ocean looking so pristine as the one on this film’s aesthetic, but it boggles me that they had to “rough up” their animation so people could tell it was animated instead of the real thing. In any case, Finding Nemo is just gorgeous, a wonderment of animated perfection that redefined detail (and continues to, to be honest – just look at the opening twenty minutes on the reef, a riot of color and multitudinous ephemera, as an example) and both the lighting effects, specifically the sunlight broaching the depths of the ocean and constantly affecting the colors below, and the color palette, which is a massive paintblast of vivid hues more often than not, give this film a fantastic sense of elemental grounding.

Not to mention Thomas Newman’s marvelous score, and the terrific work of the film’s staggering supporting cast, who all seep into their characters to the point where “stunt casting” isn’t an issue at all, unless you count resident Aussie drawlers Bill Hunter (ockering it up as the dentist) and Rove McManus (as the voice of the crabs). Finding Nemo delivers emotional weight where it counts, through Marlin’s sense of loss at his son’s capture, it delivers fun and adventure – Bruce the Shark and his friends are particularly good, as are a tribe of current-surfing turtles – while keeping itself focused sharply on character above all. Finding Nemo’s status within Pixar’s oeuvre is both starkly defined and eloquently deserved. It’s a brilliant film, a film fueled by genius and love, powered by compelling characters and an accessible story, and presented with some of the most astonishing animation to define a genre since Grumpy harumphed at Snow White.