Director :  Joel Schumacher
Year Of Release :   1997
Principal Cast :  George Clooney, Alicia Silverstone, Arnold Schwarzenegger, Chris O’Donnell, Uma Thurman, Pat Hingle, Michael Gough, John Glover, Vivica A Fox, Robert Swenson.
Approx Running Time :  126 Minutes
Synopsis:  Batman and Robin, together with newcomer Batgirl, team up to stop Mr Freeze and Poison Ivy from destroying Gotham City.
What we think : Painful, obtuse, inane; Batman & Robin comes with virtually no redeeming features whatsoever. Designed by a madman, written by a six year old with no appreciation for Batman as an IP, and directed with the ferocity of an angry rhino, this film is so dire I wouldn’t recommend it even as a form of torture, that’s how I feel about it. Little wonder Clooney continues to apologize for it. Yep, it’s that bad.

You’ve heard the stories, you’ve read the interviews and the apologetic Clooney making his “I’ll pay back everyone who had to sit through it” statement, and you’ve heard whispers about its legendary status as one of the worst films ever made. Let me say this here and now: nothing about this film will prove anything you’ve heard, read or seen wrong. Batman & Robin is an awful, irredeemably bad motion picture, a comedy of horrendous creative decisions and utterly wretched production. Famously, it ditched the Batman franchise into development hell for nearly a decade, until Christopher Nolan reinvigorated things with Batman Begins in 2005. Bankrupt of even marginal wit, devoid of soul and averse to the slightest amount of tact, subtlety or fun, Batman & Robin is everything wrong with big-budget film-making with zero oversight and even less consideration for taste. 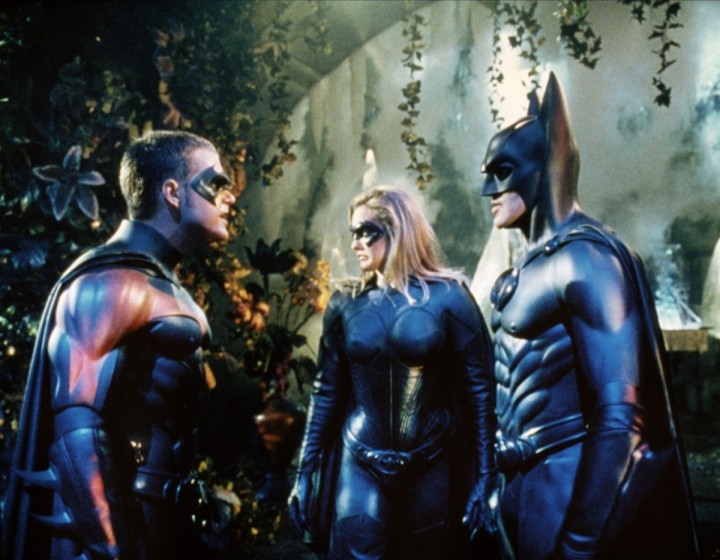 At this juncture, I would normally be the point at which I recount the plot of the film. Such as it is here, I’m still trying to figure out what the plot is. Bruce Wayne (George Clooney) and his ward Dick Grayson (Chris O’Donnell) live in their enormous mansion with Bruce’s butler Alfred (Michael Gough), who as it turns out is getting rather frail and sick in his old age. Alfred’s niece, Barbara (Alicia Silverstone) comes to stay, stumbles upon the Batcave, and faster than you can say Clueless becomes an avenging crime-fighter of her own – Batgirl – in spite of having nothing to avenge other than gorgeous hair and a fetish for motorcycles. Elsewhere, the nefarious Mr Freeze (Arnold Schwarzenegger) has a plan of his own – using his powers of cold, he plans to freeze all of Gotham City to blackmail the Mayor to give him the money needed to resurrect his long-dormant comatose wife, who hangs in suspended animation. He teams up with Poison Ivy (Uma Thurman), a nature-loving psychopath whose chief henchman is science-experiment-gone-wrong, Bane (Robert Swenson), a mindless drug-powered thug.

The fourth entry in the then-modern Batman film franchise, Batman & Robin had plenty working in its favor. Tim Burton’s foundational opening duo of films had paved the way for Joel Schumacher’s over-the-top-but-still-fun Batman Forever, a film which had its problems but was still a blast of energy compared to Batman Returns’ darker, melancholic overtones. Schumacher resumed his seat as director for this venture, and in what appears to have been gross oversight from Warner Bros (who, it would seem, never once looked at a script or any of the dailies coming from the set) was given carte blanche to go hog wild in creating his own Bat-universe for the big screen. 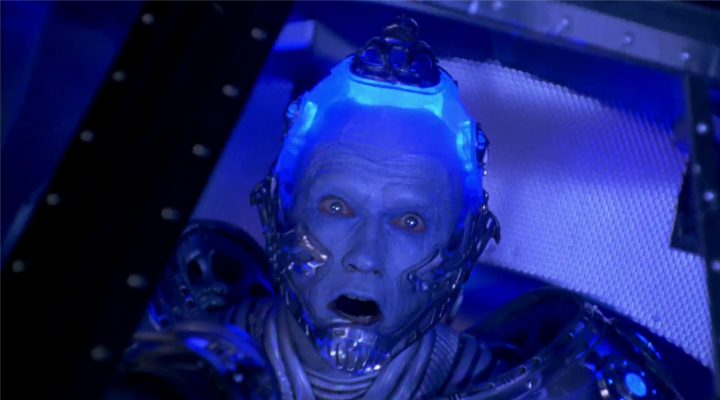 Oh my, what a disaster. Batman & Robin’s problems are many… in fact, the entire film is problematic from open to close; we begin with the bass-themed rumblings of what would become Elliot Goldenthal’s monstrously wasted scoring efforts, cut to a number of crotch, bum and titty shots as Batman and Robin suit up for battle, and are then thrust into what can only be described as a Barnum And Baily nightmare of circus acting and visual overkill, as Mr Freeze attempts to steal a massive football-sized diamond from the Gotham City museum. Throw in an ice-skating hockey sequence, a rocket ship taking our dynamic duo into space, and a poorly CG’d freefall back to Earth, and comparisons to the worst of James Bond’s cold opens become apparent. And that’s just the opening ten minutes (I know, I checked).

From there, we’re given a potted history of Freeze’s backstory, Poison Ivy’s “tragic” origin, Bane’s brutal creation, Dick Grayson’s attitude to Bruce becoming more hostile (grumpy he’s the second-stringer) and Alfred’s unfortunate ailment. All captured with the zealous camerawork of Joel Schumacher, who it would appear cannot hold a shot for more than a few seconds, and who must have discovered the term “Dutch angle” in an Idiot’s Guide To Filmmaking and thought he’d make an entire film using the method. Left side down, shake camera a lot. Yup, that’ll do it. Take note of the mid-film motorcycle chase between Barbara, Dick and a bunch of hoodlums, all of which is shot with the same Dutch Angle (left side down, dontcha know) from start to finish. Not once does the camera level off (I watched it twice, to be sure). Not only is it often poorly framed, but it’s nigh incomprehensible and utterly illogical. 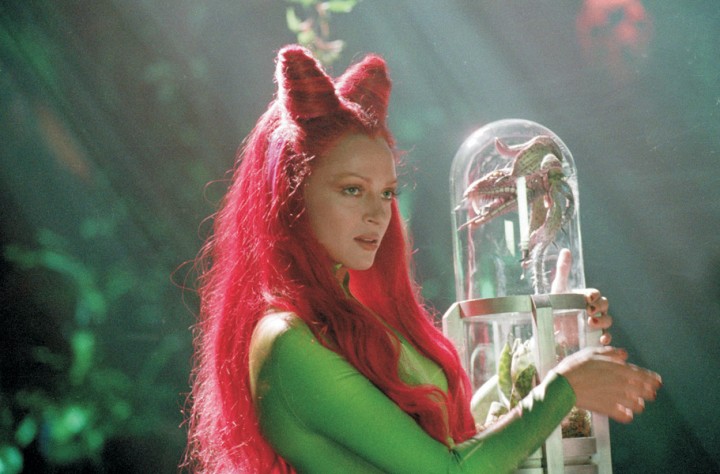 In fact, the entire film is incomprehensible. Akiva Goldsman’s script is like a crayon drawing of how a child might think Batman would be. Every second line feels like a promotional-tie-in joke, an ice-pun (Arnie’s entire script involved puns on cold, ice, or being frozen) or some entendre meant to make adults roll their eyes in disgust. Clooney in particular looks baffled by what he’s been asked to do, and squeamish at having to deliver some of cinemas most atrocious dialogue (Alfred’s early line about cancelling the order for pizza makes it feel like the scene was somehow used as a Pizza Hut commercial), while neither Silverstone nor O’Donnell have anything resembling character development at all. O’Donnell’s Robin comes off as a prancing, whiny douche most of the time, and if I were Batman I’d be sure as shit kicking him out of the Batcave, while Batgirl’s “origin” and narrative trajectory in this film is as inordinately stupid as it is studio mandated. “We need another superhero…. make it a girl, and make her hot” was probably the edict from on high.

Both villains are awful examples of overacting and style over substance. Gone is Tim Burton’s carefully structured methods on giving us villains we can empathize with – here, Goldsman’s screenplay eschews subtlety and returns us to the old Adam West-Batman camp, with glaring teeth, snarling henchmen and crash-zoom performances missing only the KAPOW and SPLAT of the 60’s kitsch aesthetic. Uma Thurman’s Poison Ivy is horrible, a blight on her career (which, with a few exceptions, isn’t that terrific anyway…. yeah, I went there!) and reduces her to a vaguely misogynistic display of feminine beauty wrought by nature, instead of its intended Female Empowerment study.

About the only redeeming aspect of the film are the scenes involving franchise stalwart Michael Gough, as the rapidly aging Alfred. Gough and Clooney work well together on screen, although they’re sorely let down by pat, trite dialogue that undercuts any serious psychological examination the film might employ. It’s a shame, because when your butler is the strongest aspect of the movie, you know something’s seriously wrong. The film even ruins one of Batman’s great villains in Bane. Bane, who was still on a streak following his (relatively) recent appearance in the cataclysmic “Knightfall” storyline in the comics (about the same time Superman was killed by Doomsday), was changed from a highly intelligent mastermind anarchist into a grunting brute with monosyllabic lines and a penchant for steroid abuse. Ugh. 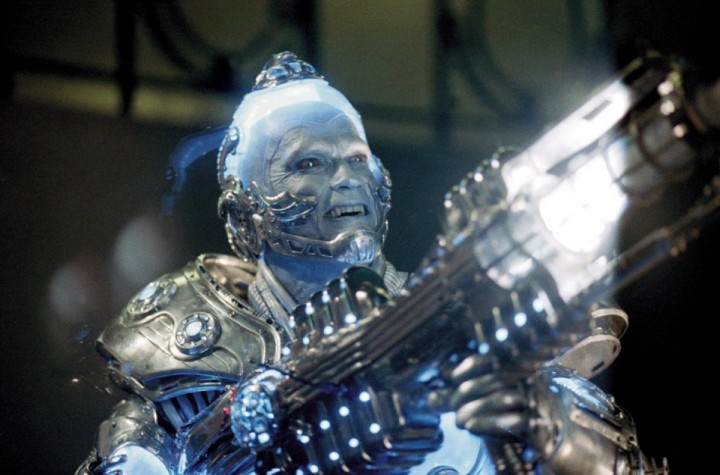 Visually, Batman & Robin is an orgy of excess. From its neon-infused lighting style, to Schumacher’s inability to hold a shot, to the vaguely homoerotic nature of the design of the Bat-suits (nipples, ugh, codpieces double-ugh) and the inflated sense of fantasy infused into every frame. If there’s not some kind of visual effect in the shot, such as an explosion, collapsing architecture or random grinder-sparks backdrop, it’s not worth doing, I guess. Most egregious is the Batmobile, here looking more like a Gay Pride parade float than a serious piece of crime-fighting hardware. The film is garish to say the least, although at least it’s a far cry technically from Burton’s nuanced work…. nope, still not a good thing. Schumacher even apes Burton’s crane shots and cityscapes to a lesser result, content to shatter audience’s eyeballs with a non-stop gag-reel of poor CG and cavernous set design that looks like they spent a gazillion dollars – perhaps had they spent more money on a decent script, and hired a producer to sit next to Schumacher and beat him senseless each time he made a poor creative decision, the film would have been better. 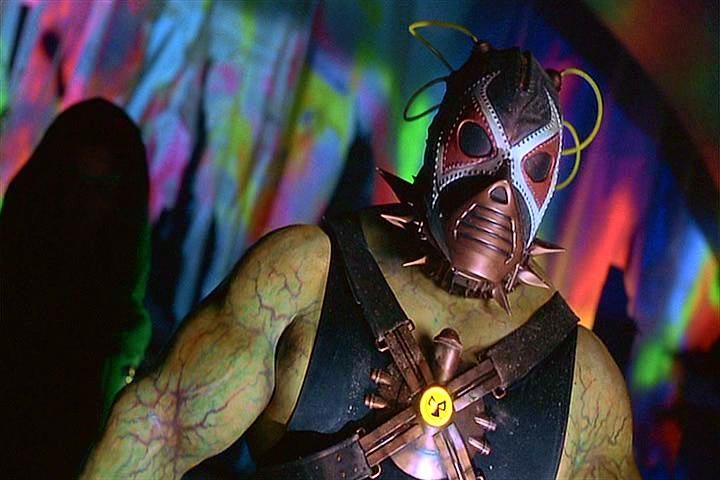 As much as Clooney gets a bad rap for “ruining” the Batman franchise, he’s hardly the main problem with the movie. In fact, aside from Michael Gough, Clooney’s Bruce Wayne is a paragon of restraint and authority within this clap-trap grab-bag of overkill and inanity. Clooney doesn’t need to apologize for this movie, Schumacher needs to (and way more publicly than he has in the past). In another life, I’d have given up a left testicle to see Clooney team up with Tim Burton for a darker, less psychedelic venture. Uma Thurman should disavow this thing, Chris O’Donnell’s career sailed south faster than Columbus, and Alicia Silverstone vanished from Hollywood not long after. Nobody comes away from this unscathed, but in a matter of degrees, Clooney is an unwarranted punching bag. Batman & Robin is a dreadful movie experience, and should serve as an example to aspiring film students on how excess and extravagance can ruin an otherwise successful franchise.