If knowledge is power, then a god. am. I.

Listen to Seal’s “Kiss From A Rose” from the Batman Forever OST in the media player below:

A change was in the air at Warner Bros in the aftermath of Tim Burton’s hugely successful Batman Returns, the sequel to 1989’s Batman and one of the highest grossing sequels of that year. Looking to capitalize on Batman’s resurgent popularity, and make a film aimed more at kids than at adults (bad move, in hindsight), the studio hired Joel Schumacher to direct the third film in the ongoing franchise, while Michael Keaton declined to reappear because he didn’t like the direction the series was heading. Boy, was he on the money. Val Kilmer signed on, and Batman Forever is the result. While the film could be seen to follow in Burton’s template, at least as far as giving the villains of the piece more time than the hero, in this screenplay the focus was on comic-booky flair and pizazz rather than realism and darkness. 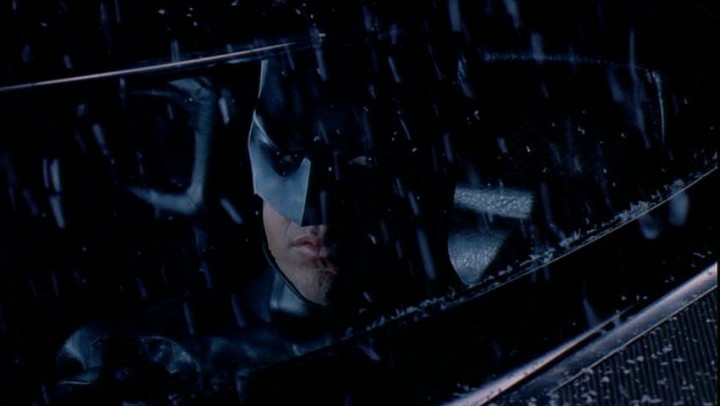 Superstar names like Jim Carrey, Nicole Kidman and Oscar winner Tommy Lee Jones were brought aboard as well, in order to flesh out the roster of villains and romantic interest to surround Batman. The intent was obviously to remain keyed into Burton’s aesthetic and yet take the franchise somewhere new – although nobody would ever guess where that ended up being (cough Batman & Robin cough). Kilmer’s Batman goes up against Jim Carrey as Edward Nigma, aka The Riddler, while Tommy Lee Jones has a blast playing the schizophrenic Harvey Dent, former DA of Gotham, who has now become the arch criminal Two Face. Nicole Kidman plays Dr Chase Meridian, a psychologist and love interest to Kilmer’s Bruce Wayne. Series regulars Pat Hingle (Commissioner Gordon) and Michael Gough (Bruce’s steadfast butler, Alfred) reprise their roles yet again. Look quickly for Drew Barrymore as a sidekick of Two Face, Ed Begley Jr as Edward Nigma’s boss, and Rene Auberjonois as an Arkham Asylum employee.

Batman Forever is, first and foremost, a load of cartoon codswallop. Nowhere near as serious and straight-up as Burton’s films, Schmacher’s flair for visuals and askewed view of the Bat-verse was on song here, as he guides Kilmer through his paces as possibly the most sexualized Batman of them all to-date. Not even George Clooney’s Batman had to suffer such romantic indignity. It’s loud, brash and colorful, exactly what the “kiddies demanded”, apparently, and yet it was released to a barrage of decidedly mixed reviews. Although missing Burton’s tragic subtext, Schumacher’s film still has a darker edge, through Carrey’s pained performance as Ed Nigma – well before he slides totally into manic insanity as The Riddler – while I found Tommy Lee Jones’ Two Face a bit of a stonewall villain in that I couldn’t find any truth to his motivations, such as they were. 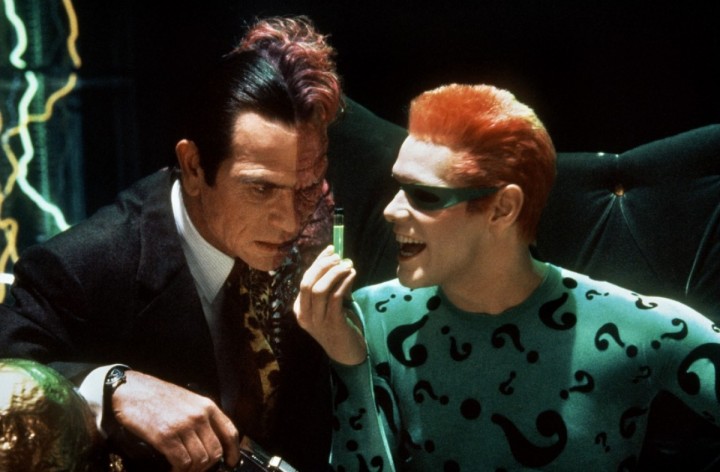 In a weird way, Batman Forever works best when it plays with a wink in its eye; Bruce’s dalliance with Meridian is a soft-edged look at Bruce’s duality, and definitely not as sassy as Batman Returns’ edginess in that regard, but at least it’s there, which is more than can be said for Batman & Robin a few years later. Kilmer and Kidman have a chemistry, and their brief moments together actually work more than a lot of other stuff in the movie. Chris O’Donnell joins the franchise as Bruce’s imminent sidekick, Dick Grayson, who will become Robin, The Boy Wonder. Dick’s tragic origin story, with his parents being killed in a “freak” circus accident, lace nicely into Bruce’s own personal darkness, and yet Schumacher either isn’t terribly invested in that part of the story, or just misses it altogether, because it’s among the weaker elements of Forever’s unforgivingly obtuse narrative. 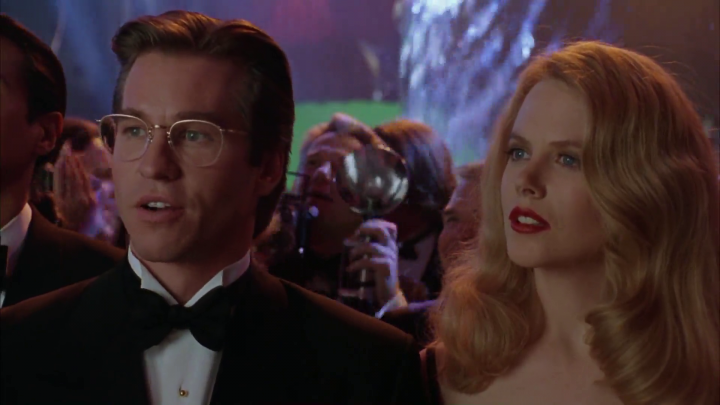 Part of Batman Forever’s mid-90’s charm is in its stunning production design. One part Burton, another part Lord Of The Rings, Batman Forever’s Gotham architecture is as sinister and layered in iconography as anything in the previous two films; I’m not sure if this was something Schumacher attempted to emulate or if he felt it was just easier than simply recreating the world from scratch again, but it works. Elliot Goldenthal’s pounding score will give almost anyone a headache, Stephen Goldblatt works overtime to deliver a fine looking presentation, and the editing team probably had their work cut out making this whole thing make sense.

Sure, it’s not a patch on Burton’s movies, and marked the beginning of the downward spiral for Warner’s popular franchise, but as an entertainment is still remarkably enjoyable. Silly, escapist fun that borders on stupid, but remains just this side of it thanks to a fun script, and winning performances from Carrey (in full-blown mugging form) and the Kidman/Kilmer dynamic.