Director :  Richard Starzak + Mark Burton
Year Of Release :  2015
Principal Cast :  Voices of Justin Fletcher, John Sparkes, Omid Djalili, Kate Harbour, Richard Webber, Tim Hands, Simon Greenhall, Emma Tate, Andy Nyman.
Approx Running Time :  85 Minutes
Synopsis:  Shaun, Bitzer and the rest of Mossy Bottom Farm’s denizens must travel to the city to rescue an amnesiac Farmer from a career in hairdressing.
What we think :  Charming, witty kids flick lacks adult-oriented subtext, but will keep the tiny tots entertained for an hour and a half quite easily. Some great chuckles and Aardman’s typically spot-on animation, together with broad characters and a simple-to-follow plot, this will be a must-see for the young ones during holiday seasons and will amuse the parents of those young ones; although those unfamiliar with Shaun’s world will possibly leave this one scratching their heads at all the fuss. Still, it’s an utter delight.

If you’re a parent of young children, you’ll undoubtedly be familiar with Aardman Entertainment’s latest stop-motion offering, the movie version of Shaun The Sheep. You’ll at least be familiar with who Shaun is, from the popular children’s program of the same name worming its way into television programming the world over. For those unfamiliar, allow me to explain. Back in 1995, director Nick Park and his successful Aardman Animation studio released the third of the short films using the Wallace And Gromit characters, called A Close Shave. Within that short film was introduced a young sheep, named Shaun by a blithering Wallace. Following another appearance in 2002, in another of the W&G spin-off series, Shaun gained his own series in 2007, with his eponymously named show running some seven minutes – about the same length as a standard Warner Bros Looney Toon. Thus far, four series of Shaun the Sheep have been produced, and the show has even had a spin-off of its own, the infant-friendly Timmy Time (Timmy is Shaun’s younger cousin, and appears prodigiously in both shows); it’s fair to say that any parent of kids under five have seen, or at least heard of, Shaun The Sheep. 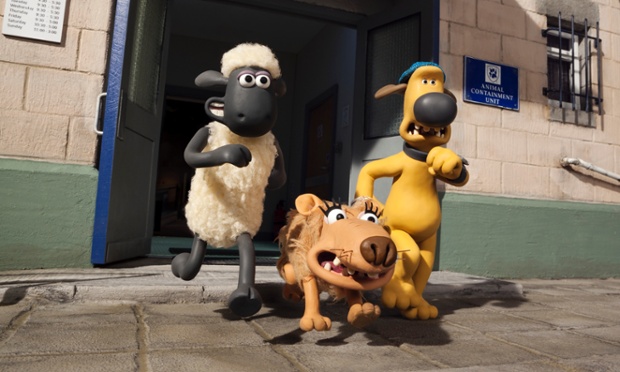 The premise of the television show is breezily simple. Shaun (voice of Justin Fletcher), together with a flock of fellow grass grazing sheep, live on Mossy Bottom Farm, owned by a largely blind Farmer (given voice by John Sparkes), who places control of all the animals (there’s a trio of mean pigs, a bull, a cat, some ducks, and a number of other cameo animals within Mossy Bottom’s boundaries) in his foreman dog, Bitzer (voice of John Sparkes, again). Bitzer and Shaun have that on-again, off-again relationship – one episode might see them at odds, while another will see them team up. Through each animated adventure, Shaun and the animals usually get up to a variety of “looney toon inspired” hijinks, inevitably around not being caught doing anthropomorphic activity by the oblivious Farmer, who is as blind as a bat, nearly deaf, and prone to sleeping through all but a nuclear explosion. Each adventure normally closes with the circular black fade-out zoom onto Shaun’s winking face. It’s wry, often hilarious, charming British farcical humor, at about the same running time as a couple of pop songs, and each one bringing a smile to one’s face. 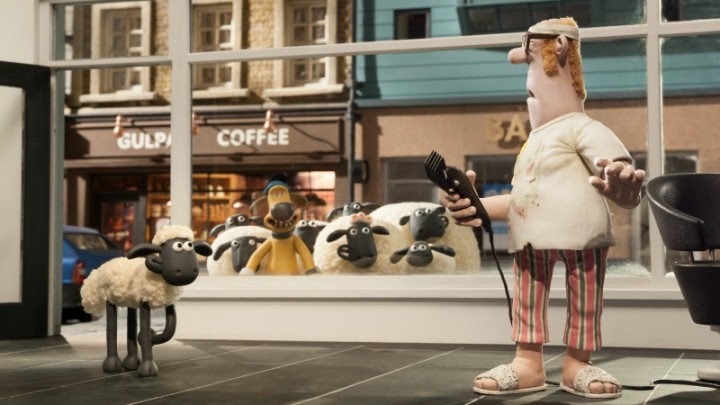 It makes sense that a program with as broad an appeal as Shaun The Sheep would eventually find its way onto the big screen. Personally, I’d have much rathered Wallace And Gromit having more time in the sun, but, like Pixar, I’ll watch anything with the Aardman label affixed to it. Shaun The Sheep’s movie adventure is, by and large, merely an extension of the television series, with a larger plot (such as it is) and a few new characters, and contains the very same energy and wit throughout its 80-odd minute running time. As with the show, the characters in the movie do not speak at all – the only human dialogue within the movie is through a variety of well known pop-cong cues – and the film’s story is driven from a purely visual standpoint. 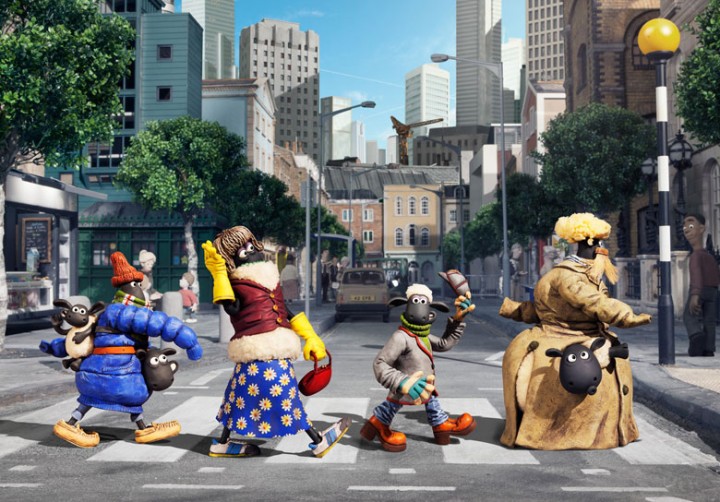 Unique in this regard, it’s perhaps scarily brave that any major film release would come along without a line of spoken dialogue (the characters who do speak, such as the Farmer, do so in a rudimentary “garble tongue” which would make the requirement for subtitles in foreign releases utterly redundant) but the strength of Aardman’s ability to tell a story through action and visuals, rather than emotive dialogue, has been honed by to-date four series (approximately 130 individual episodes) of the show prior to this movie, which follow the exact same template. Effectively, it’s an up-market Road Runner-Wile E Coyote routine, with a budget. 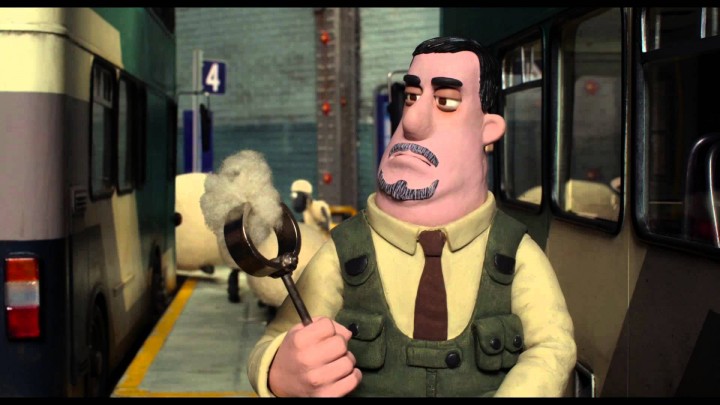 The movie’s plot is simple – after an accident in a caravan renders the Farmer unconscious, and leaving Mossy Bottom Farm to arrive, confused, in The Big City, Shaun, Bitzer and the rest of the sheep take off to get him back. The Farmer, suffering amnesia, remembers not who he is, and inadvertently becomes a hairdressing star to celebrities in the City, while Shaun and Co must outwit a nasty stray animal hunter, Trumper (voice of Omid Djalili) who pursues them without hesitation. Amid the farcical chases, bizarre animals-dressing-as-people routines and insertion of a local “city stray dog” character who gives Shaun the local knowledge to locate the Farmer and set their plan to get him back to Mossy Bottom before the evil Trumper locks them away for good, Aardman’s terrific sense of timing and comedic zest shine through. 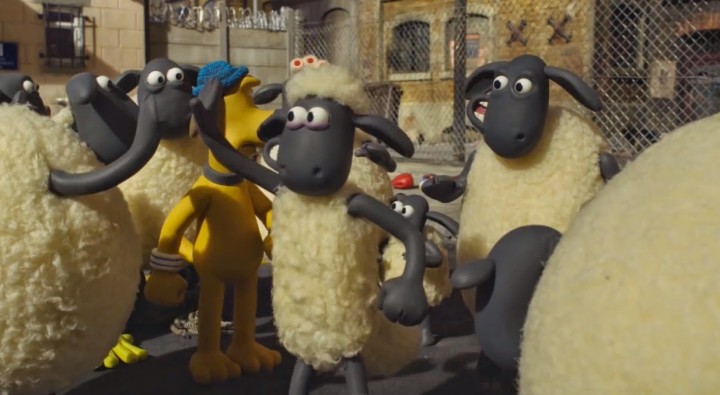 With its lack of dialogue, Shaun’s movie adventure needs to maintain a ripping pace to overcome any possible lethargy in plot, and for the most part achieves this wonderfully. The opening sequence is sparkling (especially if you’ve seen the TV version), the frantic antics to get the Farmer to the city (a caravan sliding down a hill and through the city is particularly ludicrous, yet handled superbly by the animation team) and a devilish dash through the city streets by Shaun and his human-dressed gang, make this film an often zany trip into stop motion skill which should make your jaw drop with amazement. While the mid-section of the film does find itself floundering ever so slightly, as the inevitable “hitting bottom” moment cruises along in Aardman’s iconic style (remember the moment Gromit was locked up after being framed by the Penguin in The Wrong Trousers? It’s a lot like that…), generally there’s very little here to sway audiences of any age bracket from having an absolute ball. 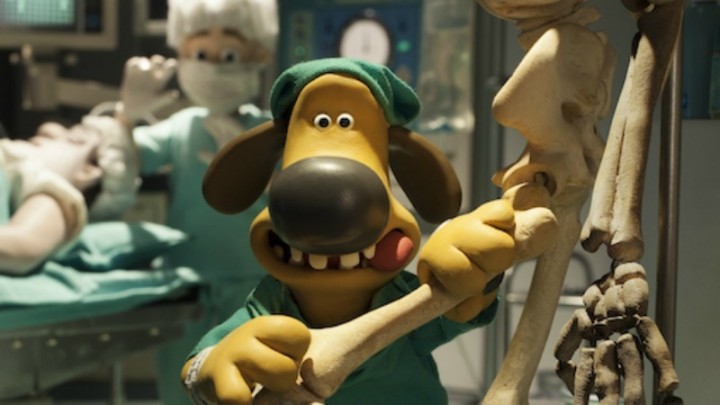 If there is a problem with the movie, it’s a lack of adult subtext to the goings-on – a lot of animated films these days try to insert jokes for the parents that kids won’t get, but this film, due to the lack of dialogue, can’t achieve this. While a sugary confection such as Shaun the Sheep doesn’t need adult humor to sell its graceful childlike antics, it would have been nice to see or hear something that worked on my level; it’s a minor thing, and about the only thing folks who don’t “get” the film might offer as a counterargument to Shaun’s brilliance. Otherwise, you’d be a hard-ass sumbitch if you found Shaun The Sheep not entertaining on some level. 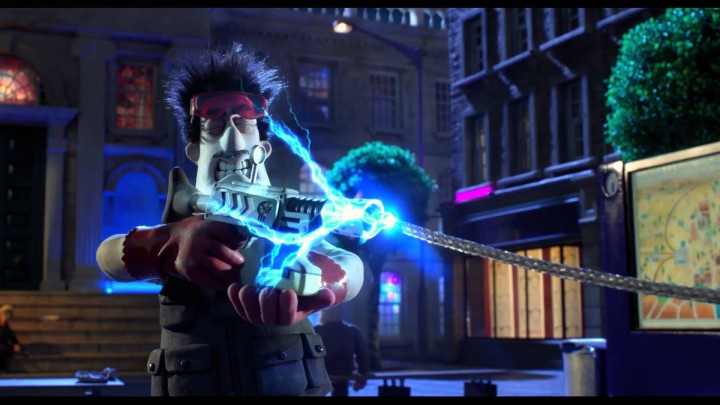 I really loved this film. Having seen most/all the television episodes over the last few years (my kids still watch it just before bed) I’m attuned to Shaun’s particular brand of slapstick humor and silent-movie brilliance, plus I got a few of the gags those who aren’t familiar with the franchise might otherwise miss. That’s a bonus. Shaun The Sheep Movie is A-grade wonderment from Aardman, a classic piece of animated brilliance that will resound with kids for as long as they are kids. Repeated viewings won’t stack up for adults, sadly, but the kids will always love it. Worth it purely for the sight of the Farmer working his magic as the Heston Blumenthal of hairdressing. Grab a kid, get to a screen, and lap this up.

2 thoughts on “Movie Review – Shaun The Sheep: The Movie”