Director :  Jaume Collet-Serra
Year Of Release :  2015
Principal Cast : Liam Neeson, Joel Kinnaman, Ed Harris, Boyd Holbrook, Bruce McGill, Genesis Rodriguez, Vincent D’Onofrio, Common, Holt McCallany, Malcolm Goodwin, Nick Nolte.
Approx Running Time :  114 Minutes
Synopsis:Mobster and hit man Jimmy Conlon has one night to figure out where his loyalties lie: with his estranged son, Mike, whose life is in danger, or his longtime best friend, mob boss Shawn Maguire, who wants Mike to pay for the death of his own son.
What we think :  Stop-start crime thriller lacks cohesion between the drama and the thrills it espouses. While Neeson gives the film credibility, and Ed Harris’ performance isn’t the cheesy Bad Guy role he can do in his sleep, Run All Night doesn’t develop it’s one-two punch of unstoppable force meeting immovable object narrative with enough strength to capitalize on what might have been. Competent at best, Run All Night just doesn’t have the pizazz a film such as this needs.

Liam Neeson’s action star career comes to a halt with this, Run All Night, a film re-teaming him with director Jaume Collet-Serra following a moderately successful run with 2011’s Unknown and 2014’s Non Stop. With Neeson willingly giving up the action genre to focus on more dramatic roles, Run All Night sees the acting great bow out with his dignity intact at least – thank God he didn’t stop after Tak3n! – although this film’s finality and “out with a bang” modus operandi leaves a lot to be desired. Collet-Serra isn’t a director who brings a much to an action film; Unknown was a thriller that didn’t exactly thrill, and Non Stop, while pleasant enough, nosedived as it went along, stretching credulity and plausibility to breaking point. Run All Night wasn’t a film I expected to remember long after it finished (that much is true) but in terms of giving Neeson a proper send-off to the action film genre he’s dominated over the last decade, I’m inclined to at least give this a passing grade out of respect for what it does right. 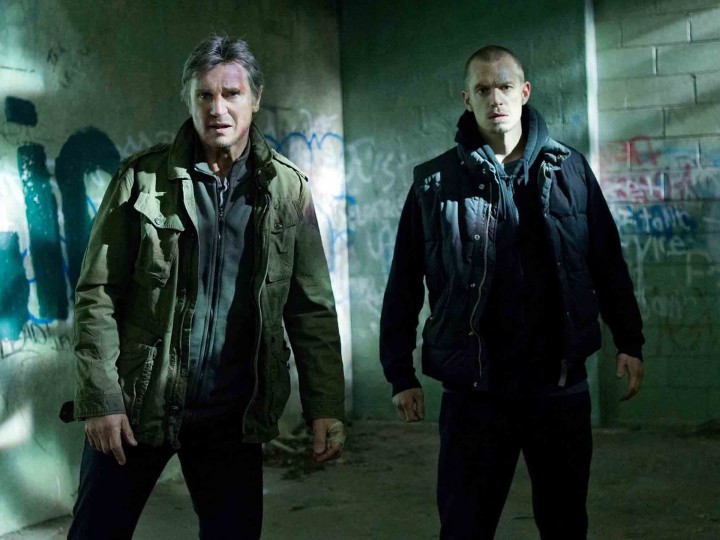 Like a weird half-brother to Neeson’s other recent New York set film, A Walk Among The Tombstones, Run All Night is smothered in darkness and corruption, the seedy underbelly of crime and the tragedy of lives torn apart by it tinted in orange and the flash of police lights. Trying to be part family-drama, with Neeson’s mob hitman Jimmy Conlon trying to reconcile with (and save) his son, Mike Conlon (Joel Kinneman), while balancing the thriller aspects of outrunning death, Run All Night’s sl0w-burn methodology works both against and for it. I know, that sounds impossible, but in competing aspects of the film working to amp up the drama, things are strongest when the story is allowed to marinate. 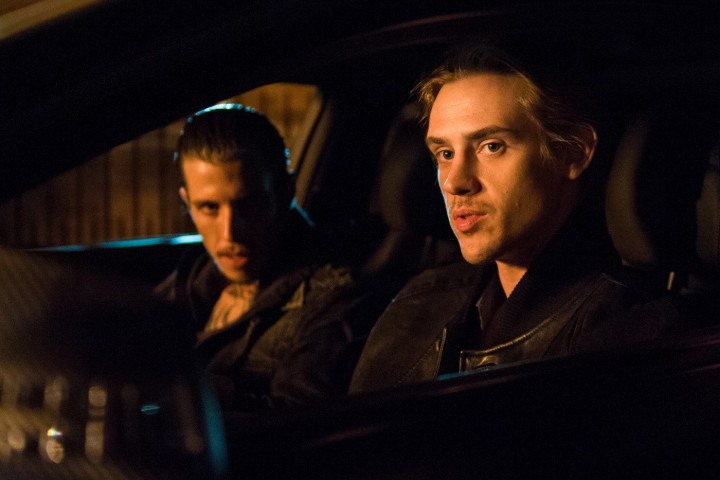 Written by Brad Ingelsby, the film traverses family drama and crime porn with ease, making Neeson’s withered, drunken Conlon a likeable, if broken, character. The film offers up mild threats and some genuine thrills, although Collet-Serra’s decision to mask most of it in darkness and shadow makes things hard to countenance. Ingelsby’s script makes all the characters here flawed, often deeply, although redemption through sacrifice is the overriding narrative arc of just about all involved. Neeson buddies up on screen with Ed Harris, who adds a layer of malevolence to his patriarchal inner strength and is a rather sympathetic Big Bad. 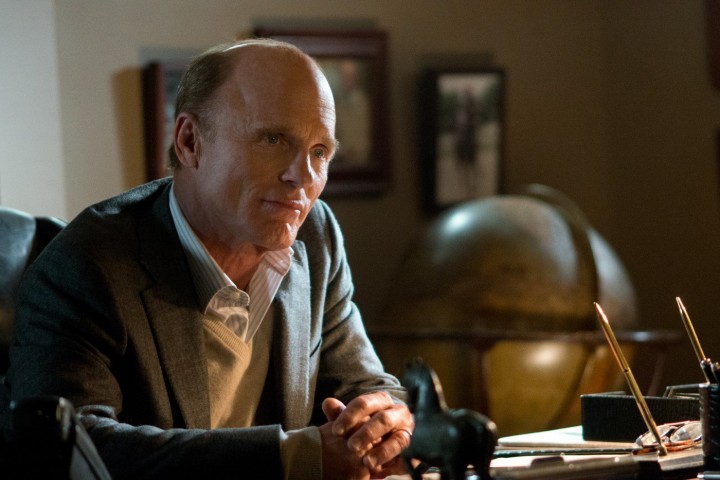 Joel Kinnaman looks a tad lost to be in this, as Mike, the real target of Harris’s Shawn McGuire, but he acquits himself okay in the end, dramatic on-screen sparring with Neeeson adding to his character’s humanity with deft touch. Genesis Rodriguez has a nothing role as Mike’s partner, while Nick Nolte pops up as an old friend of Jimmy’s when they need a place to lay low. Vincent D’Onofrio executes a similar role he had in Law & Order as a copper on Jimmy’s trail. Common has a bit-part as an assassin sent to hunt Jimmy and Mike down, and he’s good in the smallish role. The cast all perform solidly, though, as this gritty, urban noir piece rides itself into the darkness. 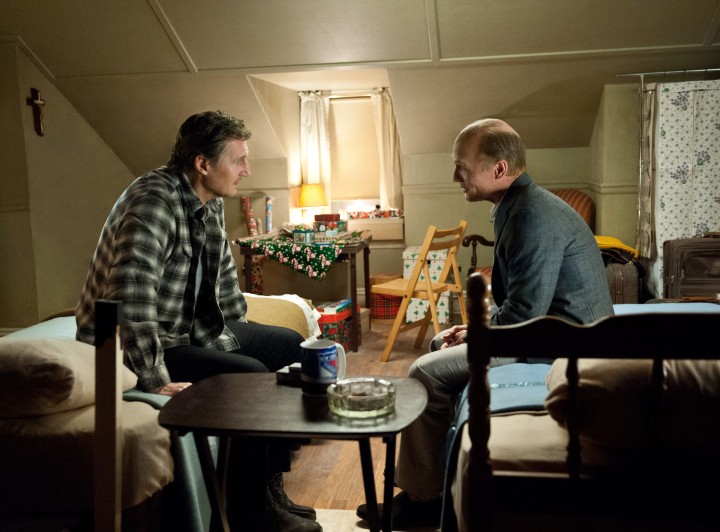 Collet-Serra’s direction is filled with menace and a raw, grim determination. It’s a workmanlike film, devoid of too many flourishes (although some moments where the camera arcs through the city skyline to focus on different characters are wildly out of place here); Run All Night doesn’t go for ostentation, and it’s a better film for that. It’s not a great film, nevertheless, and nowhere near the classic it was perhaps intended to be, but it does remain an interesting examination of redemptive crime drama that underpins a lot of what makes Neeson such a great actor – flawed characters and heartbreaking decisions that strip bare the human condition of survival and loyalty. 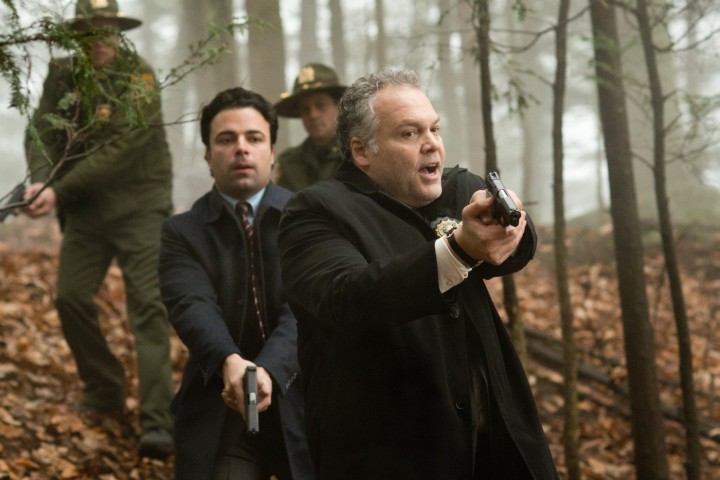 Run All Night is dingy, occasionally tense (mostly when Mike’s family are involved) and layered in the kind of duality and demonstrable insanity organized crime brings with it. As an action film it lacks crucial energy, as a drama it’s weighed down by clumsy, generic characters, and can’t seem to find solid footing for whatever tone Collet-Serra was working for. I admire Neeson for bringing his A-game to this (instead of Tak3n’s phone-it-in performance) and I admire the fact that he took a chance on a film like this so soon after A Walk Among Tombstones, but that doesn’t prevent this from being a fairly mediocre film all told.