Director :  Andrew Niccol
Year Of Release :   2015
Principal Cast :  Ethan Hawke, Bruce Greenwood, Zoe Kravitz, January Jones, Jake Abel, Dylan Kenin, voice of Peter Coyote.
Approx Running Time :  102 Minutes
Synopsis:   A family man begins to question the ethics of his job as a drone pilot.
What we think :  Hypnotically horrifying film about drone strikes is just terrific. Questioning the moral and ethical implications of UAV’s and their methods in determining who the “bad guys” are, Good Kill runs the gamut of human emotion as one man’s fractured psyche can’t quite take it any longer. Deftly helmed with precision and depth by Andrew Niccol (who worked with Ethan Hawke on Gattaca), Good Kill is explosively compelling and humanly devastating.

Death from the skies.

Unmanned Aerial Vehicles (UAV’s), drones, call them what you will – war hasn’t been the same since a plane flown on remote control could pinpoint and destroy an enemy target from the other side of the world. News reports are filled with daily reports of casualties – combatant and innocent alike – snuffed out by military drone strikes in war torn countries half a continent away. Everybody knows the technology, how good it is, how efficient it is for saving “our freedom”. But what do these efficient birds of prey cost us as human beings? We give the controls to people who target their strikes like teenage boys play X-Box; the parallel between real-world engagement and computer graphic fantasy is hard to disprove, and as Good Kill shows, war is becoming less and less about men on the ground, and more and more about computerized killing machines in the sky. 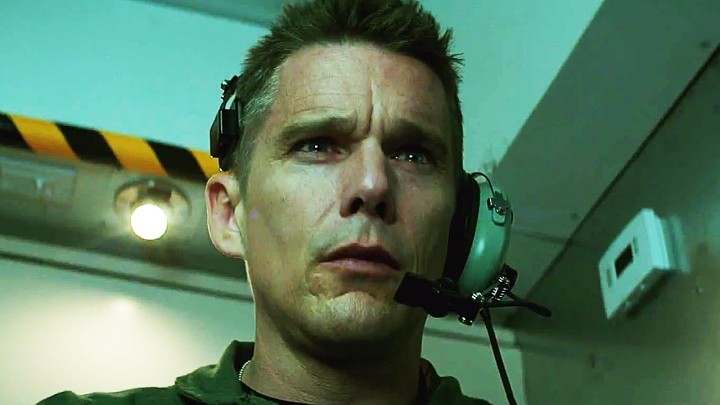 Tom Egan (Ethan Hawke) is a grounded Air Force pilot now flying UAV’s for his country above the skies of Afghanistan. He lives in Las Vegas with his wife, Molly (January Jones), and two children. Tom works in a metal box, piloting strike drones to locations across the Middle East to take out enemy combatants. He’s already having trouble reconciling his work and its outcome, so when the CIA takes command of his group (Peter Coyote, literally phoning in his performance) and authorizes questionable targets for him to execute, he starts to question everything he stands for. His commander, Colonel Jack Johns (Bruce Greenwood) doesn’t want him to burn out, and tries to smooth Tom’s way back into flying planes rather than piloting drones. New recruit Vera Suarez (Zoe Kravitz) is assigned to their team, and slowly becomes disenchanted with their mission and it’s innocent consequences. 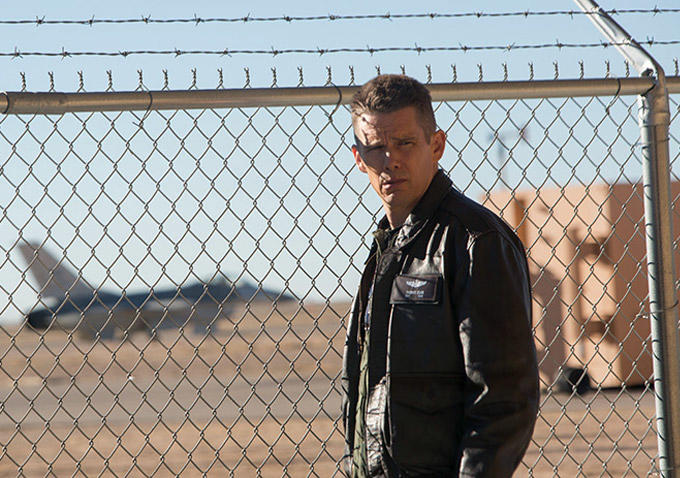 Quiet, unassuming, horrifying. These three words sum up Good Kill for me. Andrew Niccol is a director of intelligence, and has crafted a terrific think-piece in this movie; the horror of war is horrific irrespective of whether you’re above the ground, or on it. Good Kill’s terrifying precision strike of human anger and frustration, of traumatic stress, is rammed home by the distance of death, and how easy it appears to become disassociated with the real lives people take from the comfort of their air-conditioned boxes. While the film doesn’t dwell on the necessity in using drones that much, it does focus inwardly on the toll emotionally it takes on those pushing the buttons. 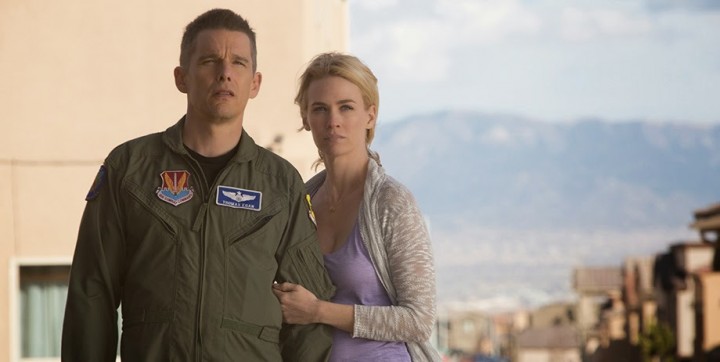 As such, Good Kill is as much a character piece as it is an “action” movie. There’s action of sorts, if you count Hawke’s character blowing enemy combatants away via an armchair in Las Vegas on a video screen. But largely, Good Kill’s emotional heft is derived from the cracks in Egan’s facade, the weight of the death’s he’s caused bearing heavy on his shoulders. The script, written by Niccol, skirts “angry military man frustrated at his job” cliche, but there’s nuance to this film that is fascinating to watch. The film is led by Hawke, but much of the exposition and moral theorizing is done by Bruce Greenwood’s Colonel Johns. Greenwood is the spine of the film, providing grounding and audience connection, while Hawke comes in as the “weak link”, the fragile, thinking-about-it guy who just wants to get back into a plane.

It’s an interesting dynamic; come to think of it, the crew of Egan’s box are all proxies for emotional angles on this kind of combat. Jake Abel’s Zimmer is one who believes thoroughly that what they’re doing is right – bomb them before they bomb us again – which is fair considering the vast majority of Americans seem to think similarly. Zoe Kravitz, who is excellent here, is the “newbie” to the crew, as Suarez, the kind of character Michelle Rodriguez would have done in her sleep, an idealistic recruit who starts to question everything that happens once the CIA start to take control. 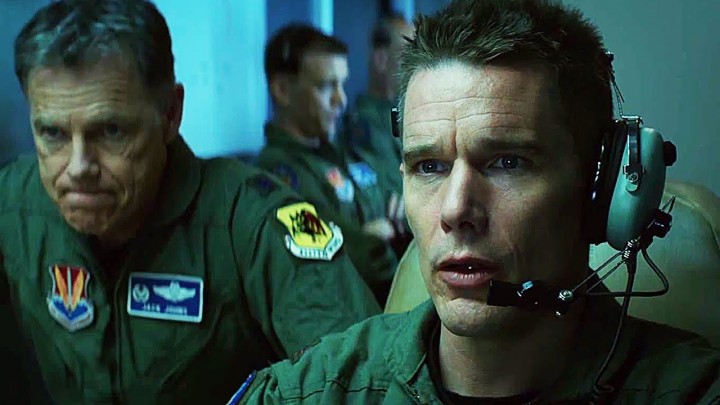 Niccol builds the film’s tension well, thrusting us into the fairly incongruous world of people in a box shooting missiles at people in the Middle East, justifying it as fighting terrorism. As an audience, we can choose to be shocked, or just enthralled, by the actions of Johns and his team. As the team debates the merits of their actions, Hawke’s character slowly starts to unravel, as his desire to return to actually flying a plane begins to gnaw deeper into his psyche as he questions his mission. The film doesn’t propel itself through action -rather, the lack of it – and I found it terrifying. The whole premise of drone warfare, and the faceless people behind the carnage, is thrown wide open for examination, as questions asked by us, the audience, are brought to bear in a cinematic sense. 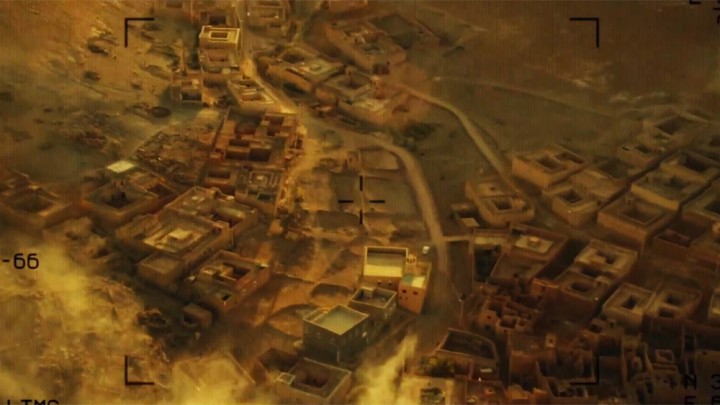 The secondary narrative is between Hawke and his on-screen wife January Jones, as Molly Egan. Their relationship, warts and all, runs congruent to Tom’s increasing detachment from his work, and although Jones is commendable against Hawke’s powerhouse delivery, her motivations aren’t as clearly defined as everyone else on the screen. This isn’t the fault of the actors, but rather Niccol’s script, which wavers into militaristic, depressive cliche, as Hawke unravels. Jones lacks the charisma of, say Jessica Chastain, but her character’s purpose to be a sounding board for Hawke’s, is well rounded enough to actually matter when it counts. At least this part of the film was more convincing than a similar arc given to us in American Sniper – this film actually balances both sides of the war on terror, whereas Sniper didn’t seem to think that was important. 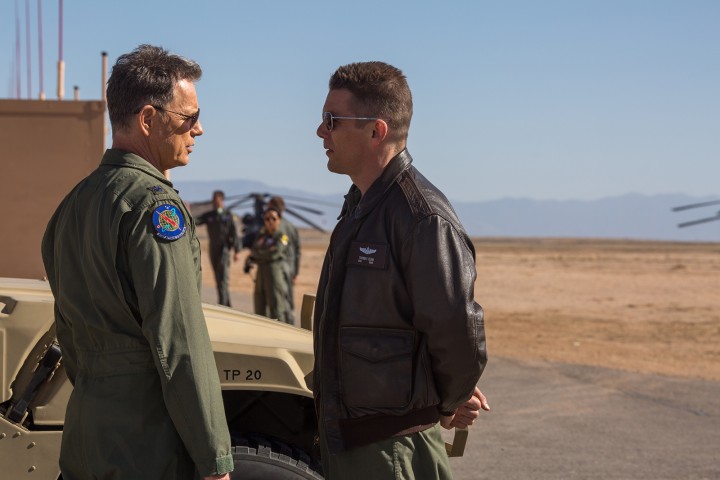 The film is heartbreaking on a number of levels. Innocent victims, children, women, are all held at a distance by the UAV’s sheer height, which is disturbing in the way it desensitizes us and the characters from their targets – although not really. The vacuum of distance between “us” and “them” only draws us closer to the plight of soldiers whose only task it is, is to see stuff on a video screen and fire at it. Targets, be they innocent or not, are there one minute, obliterated the next, as our first-person-shooter viewpoint is as close as we get, and the disconnect is morally abhorrent. The actions the movie undertakes – Tom must “take out” several targets that are utterly, impossibly innocent (or at least, not wholly combative) – is realistically portrayed (I’d love to know how they pulled off the detonations and destruction) and it’s this ruinous emotional weight that drives the film to its power. 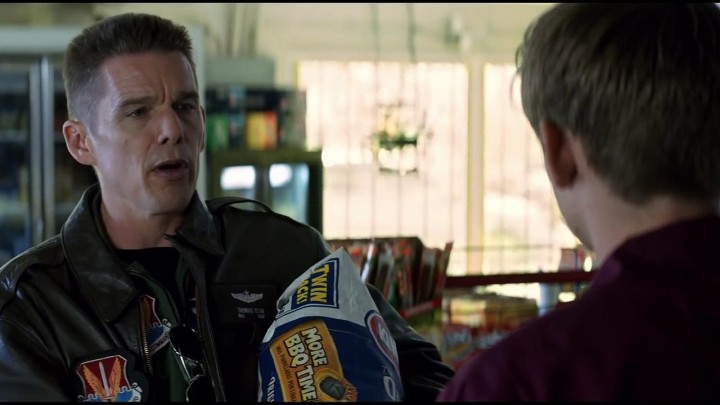 Good Kill is a powerful movie, make no mistake. The effectiveness of Niccol’s terrific direction, and DP Amir Mokri (Man of Steel, Transformers: Age Of Extinction, Vantage Point) with his wonderful lensing, make this a great character study and a peek into the dehumanization of those who serve in carrying out reprehensible acts. Some might claim it’s “too slow” – the film does move glacially at times – but if you’re prepared to give the film a moment, to give it space to breathe, it’s magnetic and evocatively delivered. Solid, engrossing, tragic work.

For a blow-up-by-blow-up review of Good Kill, check out St Pauly’s review here. It’s a cracker!