Director :  The Vicious Brothers
Year Of Release :   2014
Principal Cast :  Brittany Allen, Freddie Stroma, Jesse Moss, Melanie Papalia, Anja Savcic, Gill Bellows, Michael Ironside, Emily Perkins, Sean Rogerson.
Approx Running Time :   100 Minutes
Synopsis:   A group of teens venture into a deserted cabin in the woods to party, only to encounter an otherworldly presence.
What we think :  Slick sci-fi thriller delivers some nice scares, a few good ideas, and plenty of noise to distract you from the plot holes; Extraterrestrial is a better film than the kitschy poster might have you thinking, even though it contains almost no household names outside of Michael Ironside, and has a soundtrack bordering on migraine-inducing. Worth a look for stupid alien fun.

You might not have seen this film promoted at all, but you really should see it.

If you’ve ever watched a movie, whenever some creepy shit starts to happen, you should always follow the advice of the first person to say “hey you guys, we should pack up our stuff and get out of here”, and pack up your stuff and get out of here. Extraterrestrial, a film I expected nothing from and actually really enjoyed, has a moment like that, but like a sack full of dicks, the characters here are useless in the dark. Alien invasion? Not quite, but there is an alien in this movie. And it’s not a hilarious Michael Ironside, who does the crazy conspiracy nutjob character with aplomb. Spooky, filled with nice moments of both humor and tension, Extraterrestrial is a better film than I gave the poster credit for.

From the Soundtrack: The Magnetic Fields “The Book of Love” –

Okay, I say “better” in the sense that I expected Extraterrestrial to be utterly contemptible garbage, and it isn’t that, but it’s definitely not your Independence Day level sci-fi outing. It has its moments, it delivers a few requisite clutch-the-armrest moments, but dumb characters and genre cliches abound in what turns out to be a fairly generic cinematic outing from the Vicious Brothers. Oh, and isn’t that an awful pseudonym for Colin Minihan (who directs) and co-writer Stuart Ortiz: The Vicious Brothers. Written to maximize audience simplicity of understanding, and to minimize complexity, the script shoehorns in a bunch of cliches that are a veritable shorthand for movies like this: a group of “innocent” kids mixed up in some A-grade serious crap, a well meaning cop putting the clues together about three steps behind, a veteran who believes in conspiracies and is among the first to start explaining the premise of the movie (just in case you, the viewer, are too stupid to know what’s going on), and, naturally, a lot of dark, spooky showdowns with guns. 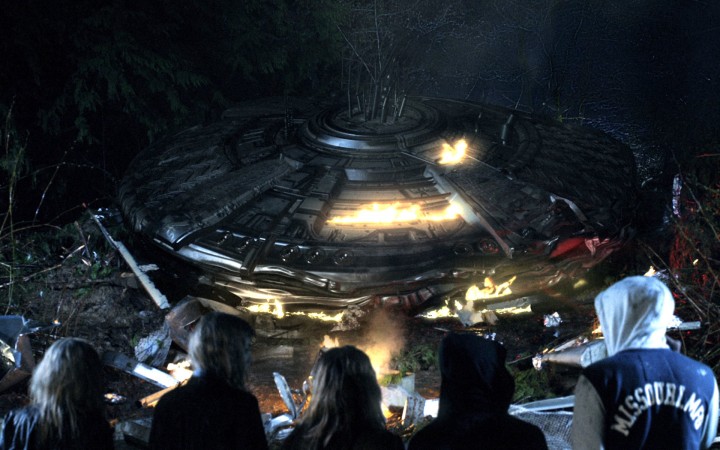 Hoping to spend a romantic weekend in the woods at her parents’ cabin, April (Brittany Allen) is dismayed when her boyfriend Kyle (Freddie Stroma) invites his friends – Seth (Jesse Moss), Melanie (Melanie Papalia) and Lex (Anja Savcic) – to party in the woods. As the group settles into the secluded location, they discover that a UFO has crashed nearby and that they are being observed by one of the craft’s survivors. They end up attacking and killing the alien, which prompts a series of counterattacks by its crew mates. Meanwhile, local police officer Sherriff Murphy (Gil Bellows) is trying to piece together a string of unexplained events, from mutilated animals, to missing people, to lights in the sky. And April’s former neighbor, crackpot theorist Travis (Michael Ironside), is ready and armed for a fight.

Look, Extraterrestrial is a fairly competent film, even thought it’s hopelessly flawed in tone and character. The central bunch of teenage “heroes”, although good looking and reasonably smart, aren’t much more than canon fodder when the shit hits the fan. April, played by Brittany Allen, seems like a budget version of Carey Mulligan, and is as close to the emotional core of the film as it every gets. Gil Bellow’s Sheriff, who we learn is still searching for his missing wife (although everyone thinks she split town with another guy), is a tragic figure in all this (particularly what happens with his character), while Jesse Moss’s Seth behaves exactly like a PTSD victim might in similar circumstances. 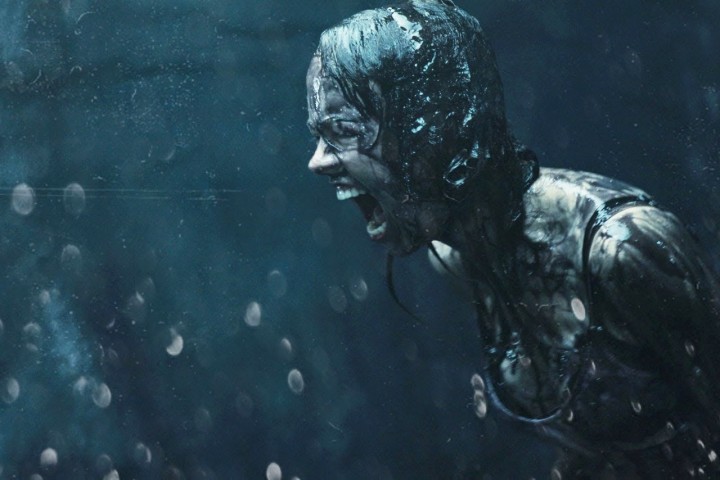 Extraterrestrial’s low-res story and simple location make it easy for the filmmakers to ratchet up tension. The prevailing dark cinematography and night time setting don’t really allow us to get a good look at the aliens, and the constant shadowy framing doesn’t give much away, but the film boasts a style and an accomplished use of CG that is effective, really effective. The aliens themselves are Angry Aliens, not passive, and their skillset includes mind manipulation, gravity manipulation, and a raft of other genre cliches. Most of all, they’re bitching. And they’re not afraid to come into the light, which is cool. 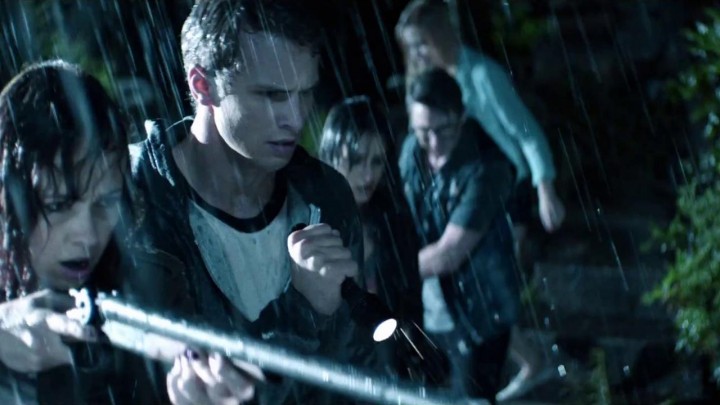 The Vicious Brothers’ direction on this film ranges from good, to compelling, to daffy. Violent, kinetic and frantic in equal amounts, Extraterrestrial laments genuine suspense in favor of simple shocks more often than not. Minihan has a distinctive style, and his use of lighting and camerawork would be, with a considerably larger budget, actually enjoyable,were it not for the blistering audio accompaniment this film endures. It’s a sound-and-fury mix, this one, all bass and jump scares, a hyperbolic roar of otherworldly scare music and stringed weirdness. The Brothers go about putting this film together like the late Tony Scott might craft a rave scene: flashing, strobing lights, shaking camerawork and acid-trip-worthy alien involvement. If that sounds like your cup of tea, give this film a shot.

I can see a lot of folks watching this and wondering what the f@ck it was they just saw. I can also see others watching Extraterrestrial and wondering why they’d never heard of it before. I fall into the latter camp: I wasn’t expecting a lot, and actually found myself enjoying it in spite of its multitude of problems. The film never pretends to be highbrow (watching Michael Ironside get alien goo on him after a Die Hard style table shootout is pure pulp fiction, if I’ve ever seen it!) and it offers some genuine thrills where you’d not think any were hidden. Extraterrestrial might not answer the question of whether we’re really alone in the Universe, but as a diverting, B-movie entry into the genre, it’s worth a look.