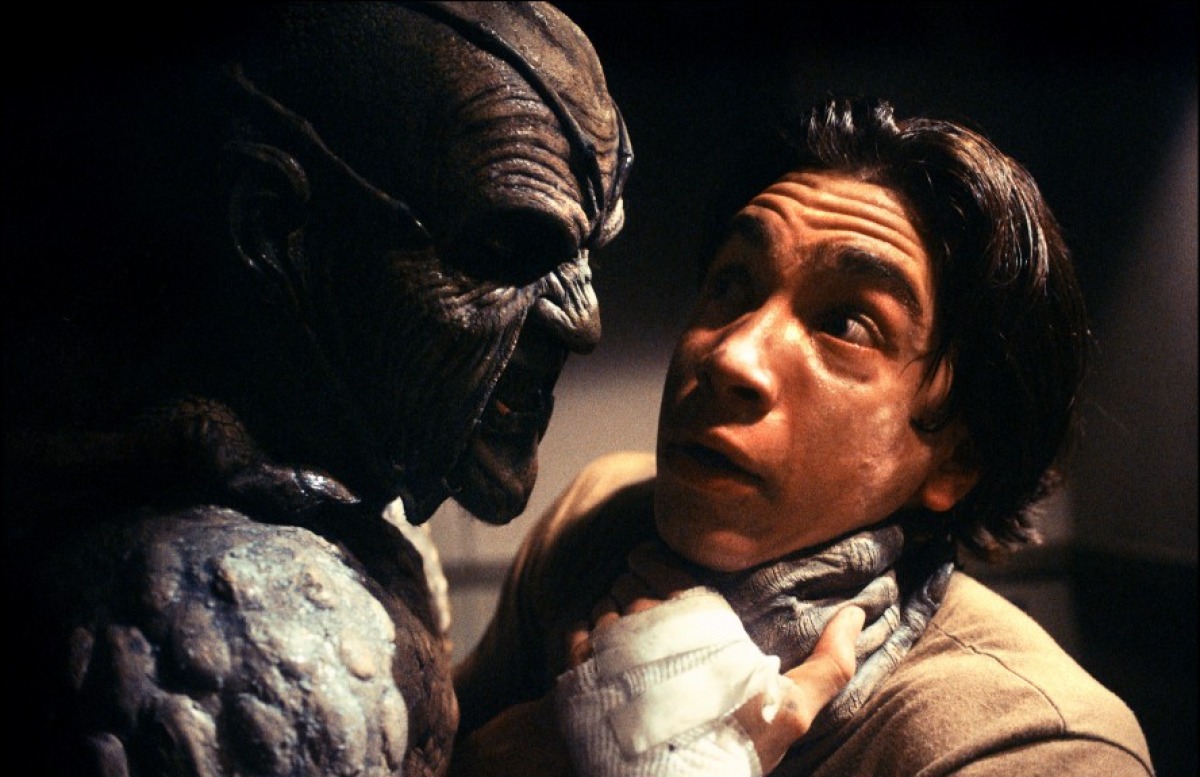 Director :  Victor Salva
Year Of Release :  2001
Principal Cast :  Justin Long, Gina Philips, Jonathan Brek, Patricia Belcher, Brandon Smith, Eileen Brennan, Jon Beshara, Avis-Marie Barnes.
Approx Running Time :   91 Minutes
Synopsis: A brother and sister travelling across the country run into a powerful monster which terrorizes them.
What we think :  A defining entry into the post 2000 horror genre, a straight-up thrill ride that punches in early and doesn’t let go, ever. Commanding direction from Victor Salva and believable performances from the young leads give this movie a lingering, dangerous allure that can never be driven away.

Where did you get those peepers?

2001 was a seminal cinema year for me. It marked the highpoint of my regular cinematic attendance; once a week, every week, for around four or five years, and 2001 landed smack in the middle of it. My friends and I would go see all kinds of movies each week, from the big budget turkeys like The Phantom Menace, to the Lord Of The Rings trilogy (which came out well after Jeepers Creepers, I might add), but 2001 heralded a special time in my life of film appreciation. Not only did we witness the birth of Peter Jackson’s iconic Middle Earth franchise, but also the Harry Potter saga, Shrek and Monsters Inc battled it out for animated bragging rights, and Clooney and Pitt swaggered into the first Ocean’s 11 remake. It was also the year my beloved Moulin Rouge came out, Christopher Nolan gave us Memento (his first genuine blockbuster, and a film I still regard as his most accomplished), I tasted French cinema for the first time in Amelie (and followed that quickly with most of Juenet’s previous films!), and felt the utter deflation of watching mildly amusing comedies such as Stallone’s Driven, Bay’s Pearl Harbor, and Hugh Jackman’s Swordfish in nearly consecutive weeks. But, and I’m gonna be bold here, nothing represents 2001 more succinctly to me than Jeepers Creepers, a film starring no known names outside Eileen Brennan (who nobody would know anyway except for her role in the “comedy” film Clue) and directed by a convicted sex offender. To be fair, he wasn’t at the time, but rewatching this film now just makes me cringe just a liiiiitle bit. 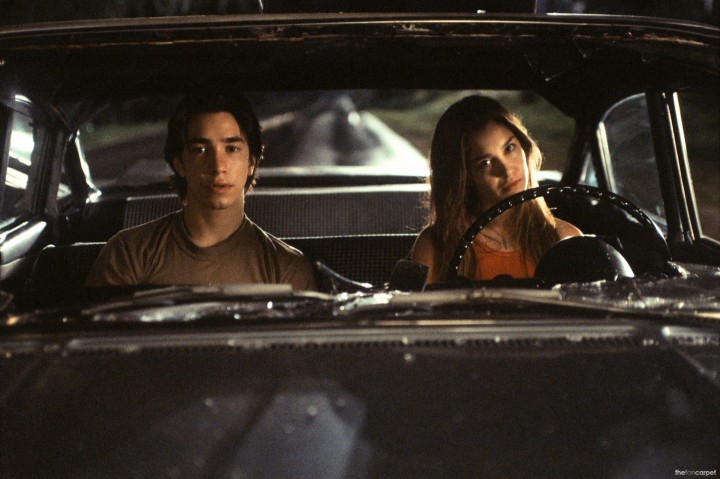 Jeepers Creepers was, for me, the definitive horror film. Until then, my real love of the genre hadn’t fully blossomed, and had been mired in stuff like the original Elm Street movie, and a Halloween episode of Married With Children. It was the most galvanizing experience of cinematic hokum I’d seen that year, and within the horror genre, ever. I’m a guy easily spooked (although, having sat through von Trier’s Nymphomaniac, not any more) and Jeepers Creepers hit me right in the nervous system. I damn near shat myself watching this film, which wouldn’t have been as bad if I’d bought a bucket of popcorn to shit into, but I hadn’t so I had to hold it. Shot for a relatively meager $10 million dollars, the film broke US Labor Day weekend records (broken 6 years later, however, by another horror film, Rob Zombie’s Halloween), but it wasn’t so much the bolt-from-the-blue success the film had that shocked me, or even what was accomplished for most films’ catering budgets. No, Victor Salva had crafted a glossy, slick independent horror film that, whether the story worked for you or not, gave us one of my most enduring horror icons – the Creeper. 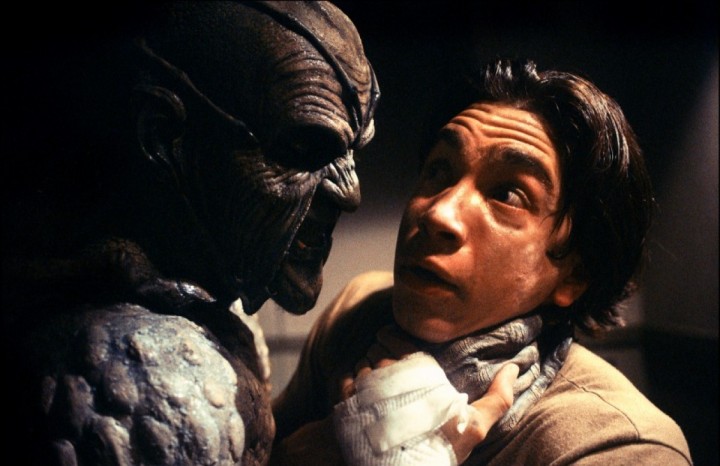 Say what you will about the film’s plot: yeah, it kinda rips off Spielberg’s Duel a bit, and goes that gore-porn route without actually being terribly gory most of the time, and delights in shadowy manipulation and brutal, otherworldy threat to make the skin tingle and the “mystery” to alarm. But in spite of several cliched missteps, in spite of a no-name cast (at the time), and in spite of Salva’s ability to molest people whilst making it, Jeepers Creepers is a taut, fat-free 90 minute exercise in gut churning terror. If there’s a film you need to see with the lights off, and the sound up, it’s this one. 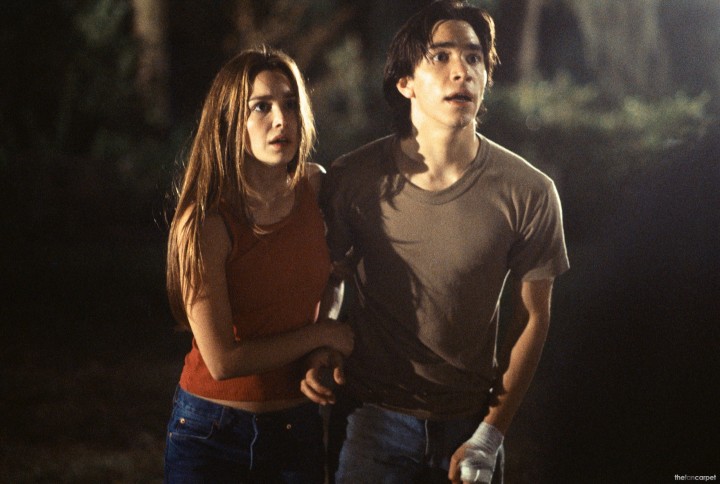 For those of you coming in late, Justin Long and Gina Philips plat Derry and Trish Jenner, a brother and sister duo driving a dilapidated old jalopy across the state (Florida) for Spring Break. No sign of James Franco here, however. They are soon road-raged by a mysterious rusty old truck, intent on driving them off the road. After this confrontation, they notice further along that the truck, together with his hooded, masked driver (Jonathan Brek, as the Creeper), are parked by a nearby church, and the driver throws what appear to be bodies down a chute. Chillingly, the driver then notices them, and gives pursuit. Terrified, the siblings hide, but then make the crucial horror film mistake of going back to the church to see if anyone needs help. Cue Creeper carnage. 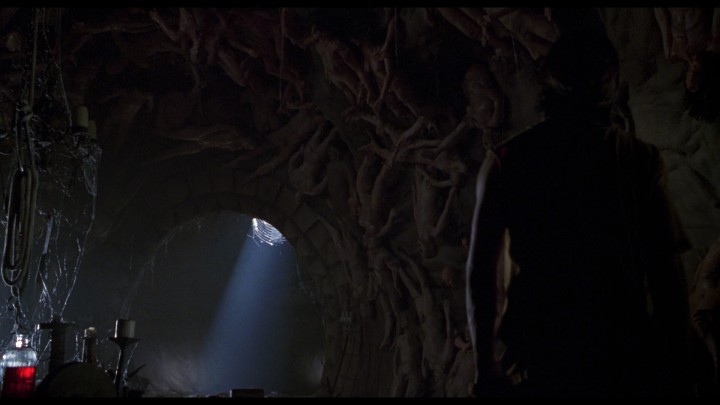 Now, it might sound relatively simplistic, and you’d be right to assume the film’s plot isn’t much more than a chase through Floridian backroads with two nubile teens pursued by a raging death monster possessing inexplicably powerful survival and hunting instincts. What you wouldn’t assume is just how frightening Jeepers Creepers is. While it stumbles with cliches at times, it’s the atmosphere and tension inherent in Salva’s deft direction here. The moment the Creeper turns to watch Derry and Trish as they drive past him shoving bodies down a tube, holds that look for a full ten seconds, and then runs to pursue them in his Nightmare Truck, was the moment I damn near shat myself. Cue popcorn bucket. 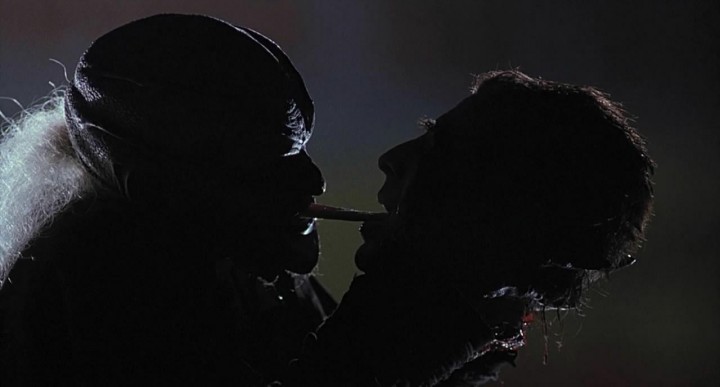 From there, elemental fears of a primal nature seep into this film, especially with the film’s now identifying tagline “for 23 days, every 23 years, it feeds” hovering just within the periphery. The inbuilt horror mythos established by this movie cannot be overstated. Within a few lines of dialogue, a new horror icon of cinema was born; an unstoppable, potentially immortal, killing machine was born, and Victor Salva offered it to us in one hell of a ferocious truck. Yet, thankfully, aside from their mortifying decision to go back and see if “anyone needs help”, Darry and Trish aren’t idiots. I mean, they are, but they behave relatively rationally considering what little they know, their age, and their knowledge of Scream-styled genre insider trading. 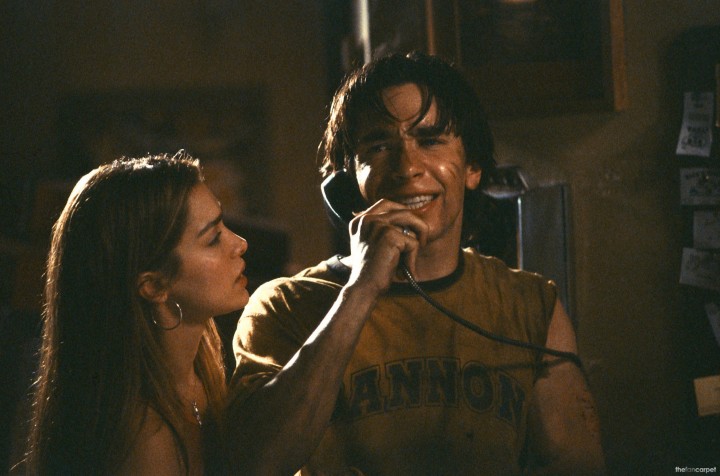 Justin Long would go on to have a remarkably bland career in all kind of stuff, including shit like He’s Just Not That Into You, which, let’s face it, isn’t a film so much as a Women’s Lib Movement propaganda bird-flip, Going The Distance (where he and Cougar Drew Barrymore get it oooooon) and Movie 43, perhaps the grossest representation of a “film” in recent Hollywood history. And Dodgeball. He was in that. Gina Philips has done sod all of note since, not counting the ineptly named The Advocate’s Devil, which one can only assume is the porn version of The Devil’s Advocate, amirite? In any case, both Long and Philips make a resoundingly good pairing as brother and sister. Perhaps this becomes the film’s most courageous hook – they’re not romantically entangled, and now will they never be, so we can just get on with the Creeper’s rampage through their lives. Free of romantic distractions, Salva’s screenplay works best when the Creeper isn’t on screen. The tension of that “lurking”, that “around the corner” surprise coming at you, is palpable as you aren’t ever sure when that monster is going to appear. But it will. And does. 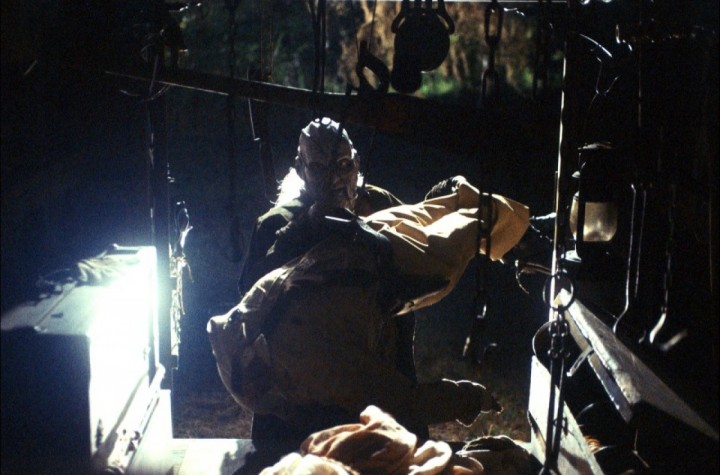 Sadly, the most inept part of Jeepers Creepers’ $10 million spend was the lack of consideration given to producing a conclusion that is coherent. Locked inside a police station, attacked by the Creeper, the shadowy, dark corridors of the world most astonishingly expensive small-town cop-shop become a haven for Salva’s lack of budget by this point. The ending is choppy, lacks grace and, if you ask me, looks like they’d spent all the money by this point. Up til then, especially and including the now famous “run it over” sequence which was shot almost in silhouette most of the time, for added shock value, the film looks nice, shiny and “expensive”, even though it wasn’t. But the ending, with a cop-out moratorium in closure left me astonished that a film so good with twenty minutes to go could look so slipshod by the end, is perilously ruinous. 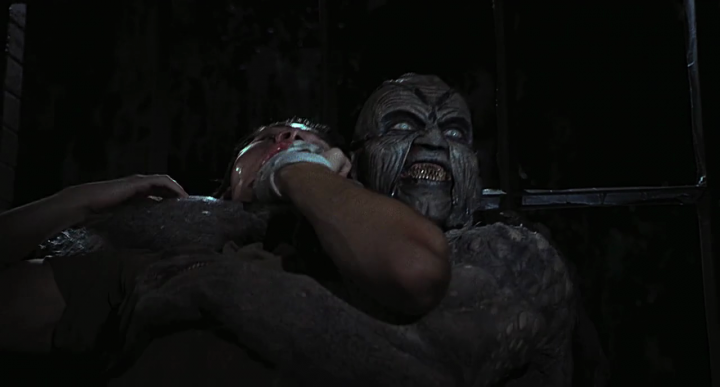 Otherwise, Jeepers Creepers is a blast. It’s silly, genre fun, it has some genuinely great scary moments, and a few utterly terrifying ones, but above all, it doesn’t waste time with anything other than the two leads and the Creeper getting down to business. That’s it, and that’s all a good horror film should do. Get down to it. If you’ve never heard of it, or held off on a viewing because it looked a bit cheesy or something, give this one a crack because it’s one of those films that I still get an actual chill down my spine just from thinking about it. It got into my brain, lodged inside my dark, evil soul somewhere, and refuses to come out. Who knows, maybe in what… another 2024 we’ll finally get the often promised third film to complete this story. In any case, Jeepers Creepers is my all-time classic New Millennium horror pick.