Director :  Victor Salva
Year Of Release :  2003
Principal Cast :   Ray Wise, Jonathan Breck, Nicki Aycox, Garikayi Mutambirwa, Eric Nenninger, Merieh Delfino, Diane Delano, Thom Gosson Jr, Billy Aaron Brown, Lena Cardwell, Al Santos, Josh Hammond, Drew Tyler Bell, Luke Edwards, Shaun Fleming, David Zepeda.
Approx Running Time :  104 Minutes
Synopsis:  A bus load of teenagers and a vengeful farmer take on the powerful and deadly Creeper, as the last of his 23 days is coming to a close.
What we think :  Boasting zero major stars, plentiful cool death sequences and a monster that Will Not Die, this by the numbers sequel actually improves and expands the story from the first film, even though it does get bogged down in genre cliche more often than not. Still, Salva’s strong direction and atmospheric framing of this simple survivalist film stands the test of time even now, giving Jeepers Creepers 2 a cult flavor that cannot be denied. Horror fans will lap this up. Everyone else will most likely skip it on title alone.

The trouble with sequels is that typically, when you kill the majority of your cast in the first film, it’s hard to make a follow-up link in without some tenacious plot twisting. The great thing about Jeepers Creepers 2 is that it deftly uses the “every 23 years, for 23 days, it gets to feed” motif. Although made only a few years after the original film, Victor Salva’s sophomore salvo (heh) takes place within the same 23 days as the earlier films’ setting. In fact, Justin Long’s Darry makes a small cameo, linking the previous film with this one, although the sheer fact the Creeper is in it should prove the only link required. 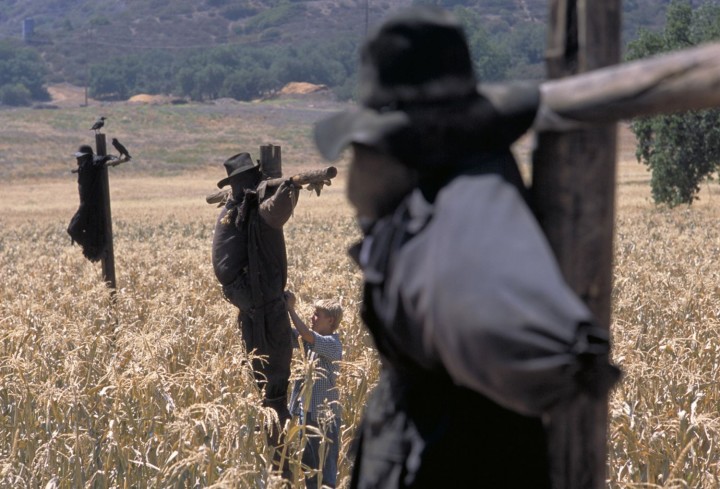 A few days after Darry’s death at the hands of the Creeper (Jonathan Breck), a schoolbus full of highschoolers is stranded in the middle of nowhere after a tyre blowout, and quickly learn about the Creeper thanks to a psychic link to one of their classmates, Minxie (Nicki Aycox), and local farmer turned Creeper-hunter, Jack Taggart (Ray Wise), whose son Billy (Shaun Fleming) was taken from their farm by the creature. As the Creeper attacks during the night, and one by one the kids are killed off, it becomes a battle for survival and revenge.

No matter how often I watch it, I think I enjoy this one more. It’s not a better film, on balance, just different, and Salva’s canny enough to know that a sequel needs to go large or go home. Uniquely for a film snug in the bosom of the horror genre, this sequel actually enhances and widens the mythos of both the Creeper and the franchise overall, and attains a status reserved for only very few sequels of any genre: it’s as good as the original film. Where Jeepers Creepers spent a lot of its time as a chase film, with Darry and his sister trying to outrun and outwit the Creeper, Jeepers 2 goes the other way and makes the Creeper come for the ensemble cast, who all happen to be stuck inside an old schoolbus. 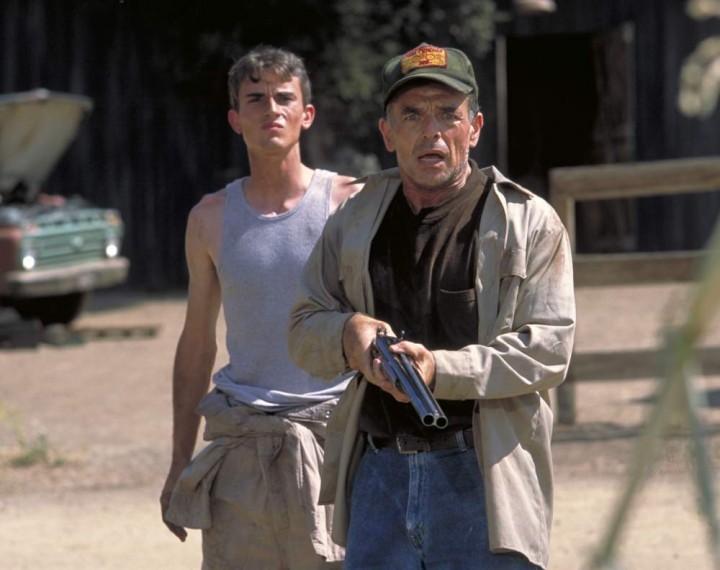 The subtle links to the previous film, which provide chronological background and set the scene, cannot overcome the film’s largest fantasy hurdle, which is an apparent psychic link between the dead Darry of film 1, and the blonde Minxie of this installment. By some fluke, Minxie has “a vision” of the Creeper thanks to a cameo from Darry’s ghost, warning her about the creature’s intentions. Now, this is a stretch, considering the utter lack of such mystical powers established by the franchise’s canon, and yet the characters seem to buy into it with relative ease (well, it’s a horror film, so everything’s a stretch I guess, but this is a particular plot point that doesn’t sit well with me). As a story point to give the characters all the information they need – we already know what’s going on, but somehow Salva needed to give the screaming teenagers their lesson in uber-strong death creatures via a particularly nasty LSD trip…- it kinda doesn’t work, but overlooking that the rest of the film is dynamite. 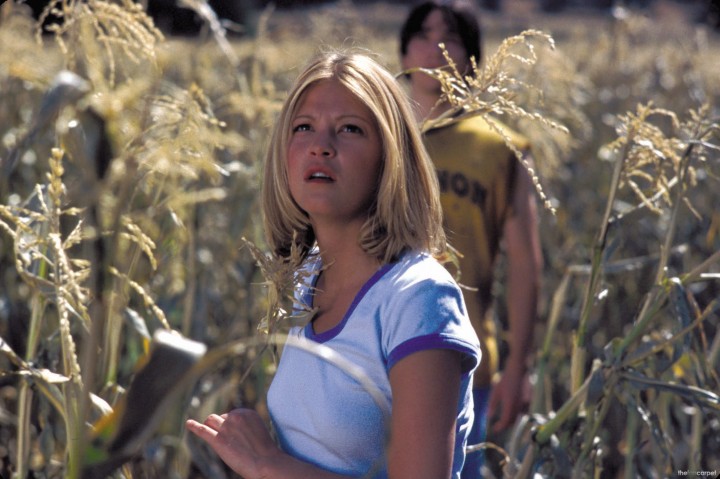 Salva’s handle on chills, jump-scares and plain old terror is once again in full flight, albeit differently handled than the previous film. Where he kept the Creeper lurking in shadow and darkness the majority of the time, here he allows the creature to come… well, into the light a little more. Not a lot, mind you, what with the vast bulk of this film occurring once the sun goes down, but a chilling opening sequence, where the Creeper snatches Taggart’s young boy, after masquerading as a scarecrow, sets the tone for what is ultimately a thrill-ride of horror. 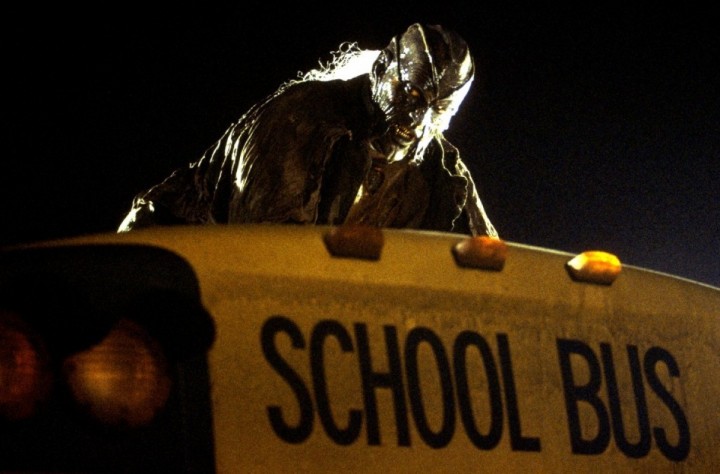 Salva spends only a little time setting up the main non-Creeper characters. A team of basketballers, now state champions (apparently), are heading back home celebrating. Usual team rifts lurk below the surface, as macho tension between players bubbles up as the bus breaks down and people start dying. There’s a few genre stereotypes, such as the whitebread hero player who doesn’t get enough time on the court, the two black dudes who hipster each other as a minor posse, and naturally the cheerleaders (who don’t look much like cheerleaders, to be honest) rolling their eyes at all the testosterone going their way. It’s all great shorthand work by Salva to provide a rapid-fire set-up, easy visual cues to who may or may not make it, and naturally the bulk of people in the frame who end up eviscerated at the hands of the brutal Creeper. One could argue that the lack of development on any of these characters shortchanges the film, but it doesn’t. No, Salva works with the knowledge that you haven’t come to see some highschool drama play out, you’ve come to see the Creeper. 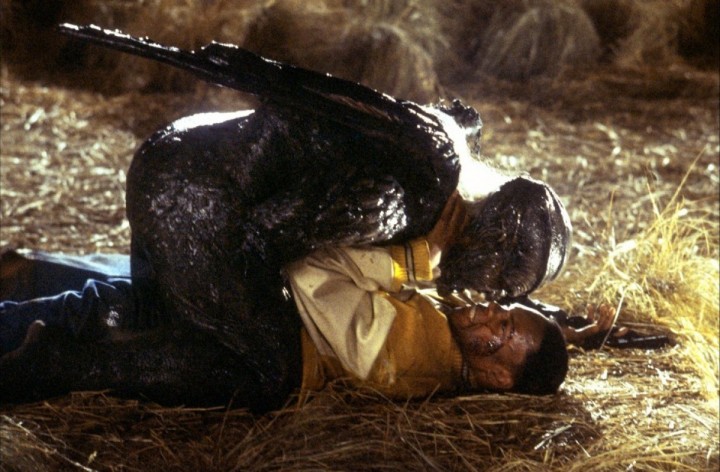 Jonathan Breck has an absolute blast as the titular Creeper. While his face and body is buried beneath layers of prosthetic rubber and dark costuming, as well as continually shrouded in shadow and darkness, Breck’s eyes tell us all we need to know about this creature. It’s evil personified. The lack of backstory to the Creeper, such as its origin or its species, or its reason for doing what it does, makes the ominousness of the character work so very well. It’s enough mystery to give the Creeper an otherworldly, malevolent presence, a powerful un-killable villain for whom the all-too human combatants stand no real chance. However, Ray Wise’s character, filled with rage at his son’s murder at this creature’s hands, proves a worthy adversary. 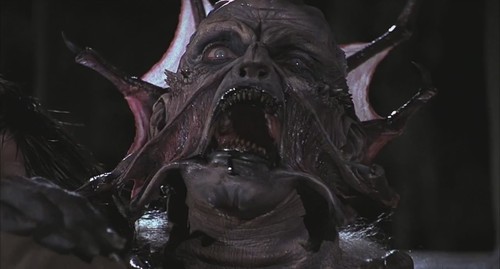 As much as this film’s internal structure is predicated on liking (or not) the youthful cast of teenagers, and the fact that Salva never really builds into them any kind of audience investment other than “oh, he’s gonna snuff it first”, the film’s moody atmosphere and gut-punch frights make for enthralling and chilling viewing. Jeepers 2 gives broader knowledge as to the Creeper’s physical attributes, and sets up potential sequels or prequels with its nigh-indestructible antagonist (the ending of this film leaves the gates wiiiide open for a third film), making it a rare film indeed. A film that improves on the original, and makes us keen to see more films in this franchise.