Up, up and awaaaaayyyyy with ye!

If you asked anyone on the street to tell you Superman’s history, his backstory, you’d have a 100% strike rate with three things: escaped Krypton’s explosion, came to Earth and assumed a secret identity, and has X-ray vision that he doesn’t use to spy on women in the shower. Now, ask that same question of those same people about Supergirl, and you’ll probably be met with a blank, uncomfortable stare. Truth is, nobody outside comic book nerds actually know the origin of Supergirl, or as she’s better known, Kara Zor-el, the cousin of Kal El. A convoluted, confusing and at times insipid attempt by various comic writers over the years have attempted to give Kara as iconic a history as her better known cousin, and by and large they’ve failed. You see, the allure of Superman was that he was the last of his kind – an orphan, sent away from a doomed planet to save us all. Supergirl typically arrived from some fragment of Krypton that survived the explosion (although, in many versions, Krypton was obliterated by its sun going supernova, so exactly how a “fragment of Krypton” survived, mush less had established gravity and atmosphere of its own…. oh well) and stumbled to Earth with powers similar, or somewhat diluted powers, to that of the Man Of Steel. Now, on the surface, Supergirl has always felt like an easy steal: I mean, she wears the same costume, but for some reason her popularity among comic book readers has always been led by how curvaceous, or buxom, the Girl of Steel was drawn. Nobody could ever really make her as iconic as her cousin, no matter how they tried. Even Peter David, one of the better comic writers around, left me baffled with his “fallen angel” take on the character after the character was introduced in the post-crisis comics as a playdoh version with limited “super” powers and the addition of telekinesis (or something). Look, the point is, there’s no “real” story to Supergirl other than whatever convoluted idea a comic writer had to get her from Krypton to Earth and wear the same outfit as Superman. 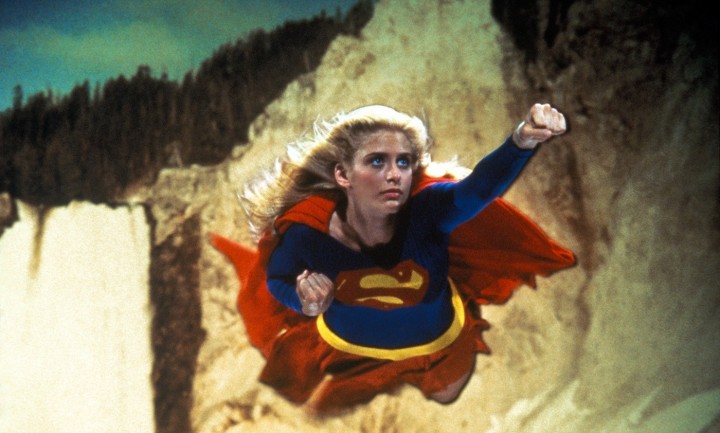 So in 1984, following the dwindling success of the Salkind family’s productions of Superman’s feature films (starring Christopher Reeve), they turned their attention to Kal El’s cousin, Kara. Portrayed by Helen Slater, who absolutely looked the part and did a bang-up job considering the low-grade visual effects and horrendous story she had to work with, Supergirl’s first foray into cinema…. let’s be honest, did not end well. Pilloried for being cheap, lambasted for shoddy screenwriting and blasted for truly shitty acting performances, Supergirl’s first movie venture was destined to be her last. With a weird, magically themed backstory and plot device running the narrative, and some dire visual effects amidst the pretty cool ones, Jeannot Szwarc’s take on Supergirl isn’t without its positives, but they’re lost behind a tsunami of terrible creative ideas and execution.

Kara (Slater) lives on an asteroid housing the last surviving Kryptonians, floating through space (apparently), with her parents (Simon Ward and Mia Farrow). She is friends with local… er, wizard? Zaltar (Peter O’Toole, who looks utterly lost here), who tells her all about the films’ MacGuffin, the Omegahedron, the device which powers Argo City and keeps them all alive. So when the Omegahedron somehow gets sucked into a vortex blah blah blah Kara deicdes to follow it and become Supergirl for no reason other than it suited the creators of this movie. After arriving on Earth decked out in the exact same costume as Superman (whom Kara doesn’t actually know, because she’s only just arrived, but anyway…) she encounters local witch Selena (Fay Dunaway), her idiotic sister Bianca (Brenda Vaccaro) and her servant Nigel (Peter Cook). Selena recognizes the Omegahedron as a source of great power, and intends to use it to blah blah rule the world blah blah. Kara, meanwhile, takes on the appearance of a human girl and goes to f@cking school, under the pseudonym Linda Lee, where she meets Lucy Lane (Maureen Teefy), the younger sister of Daily Planet columnist Lois Lane, as well as school janitor (or whatever) Ethan (Hart Bochner, who plays this role like he’s half asleep, which he probably was), who Kara falls for. As Linda, she must thwart the pitfalls of everyday human life, and as Supergirl, she must thwart the magical powers of Selena and her quest to harness the power of the Omegahedron.

There’s so many gaps in logic in this film, so many story paradoxes, so many gaping holes in the franchise’s overall style and tone, it’s little wonder this thing bombed out at the cinemas. I mean, how can you go past Helen Slater in a leotard and a cape, and not want to look at it? Easy. When Slater, as the title character, is reduced to multiple cameos in her own movie. With the film boasting a sizeable set of co-stars for the your debutant, it’s little wonder Slater looks so out of place here. The film focuses a lot on Peter O’Toole when it’s on Argo City, and a whole heap on Faye Dunaway when it’s on Earth. Sure, Supergirl comes out when she’s needed, but I’d estimate that half the damn movie doesn’t involve Helen Slater at all! Damn you, people!

The story is as comic-booky-convoluted as they come, and considering Supergirl’s sloppy-seconds backstory history it’s little wonder that the film feels so piecemeal, ready made to just twist and turn itself into a pretzel simply to accommodate the Big Name Stars within it. Dunaway is the most egregious example, offering a character with as much appeal as cancer, as much depth as cement, and as much humor as death. Simply put, Dunaway’s role, and of those around here – Peter Cook and Brenda Vaccaro – is abominable. I know, it’s the way she was written, so there’s no escape for the writers of this cinematic bukkake session: f@ck you, David Odell. Supergirl’s script is appalling. 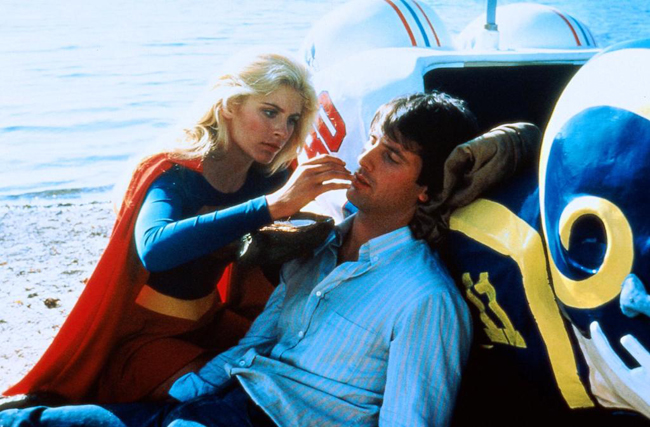 That director Jeannot Szwarc makes the film as good as it is is telling. Whenever Helen Slater’s Kara is on screen, the film truly does light up, she’s that good. Uneven, yes, and lacking finesse with her acting, sure, but she’s the draw and the film wastes her with nothing subplots and nowhere trajectories. As Supergirl, she looks the part, and you believe her in it. Her encounter with one of Selena’s demonic summonings, an invisible monster that terrorizes her at school, is a particular highlight, and coupled with Jerry Goldsmith’s equally hummable theme tune (I still have it stuck in my head a week after watching this) remains probably the most memorable sequence of them all. Kara’s interactions with a bubbly Maureen Teefy, as Lucy Lane, are also fun to watch for the most part, while the addition of Superman film alum Marc McClure, as Jimmy Olsen, is simply cashing in on the previous films’ acclaim.

But Supergirl is hamstrung by poor writing, a nothing plot and characters as bereft of interest as you’d ever see. Oh, and the budget of this film for its special effects, particularly Supergirl flying, are atrocious. Considering how realistic the original Superman movie still looks to this day, and we all know it’s a goddam green screen, comparisons to Supergirl are appallingly bad. This film looks cheap, it feels cheap, and you get the sense that Szwarc was fighting an uphill battle every step of the way. 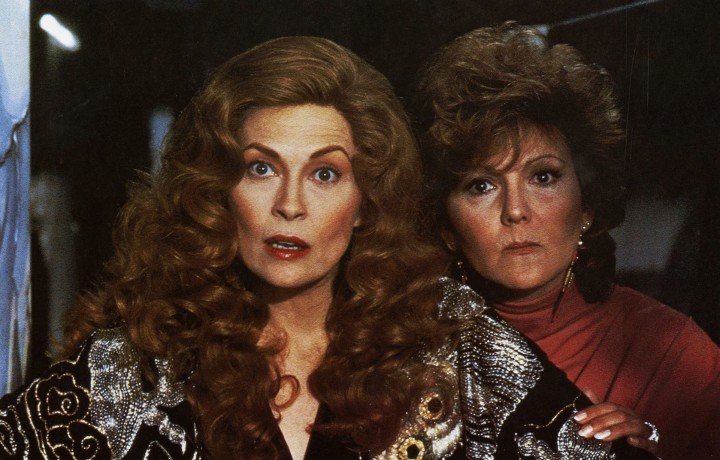 I admit, Supergirl is an easy film to sleep through. The Director’s Cut, which runs just over 2 hours, is a tedious, trudging stagger through odious plotting and awful character performances, culminating in one of the more ludicrous comic-book-movie finales I’ve ever seen, even if it’s the closest the film gets to the Superman mythos throughout its entirety. It involves the Phantom Zone, that dead-area of Superman’s Kryptonian heritage and one thing I think the films actually got right. There are other, truncated versions going around (including several different TV versions, as well as the shorter theatrical version) but I favor the Director’s Cut purely because it includes everything bar the kitchen sink. At no point would cutting scenes out improve the movie, it’s just bad from its DNA.

Supergirl has the misfortune to be one of those cheaply made DC movies from the 80’s, back when the genre was perceived as being “for kids” or “for morons” or something. It’s a shame, because I actually think Helen Slater’s performance as the Girl Of Steel is really good, even thought she’s mired in this dreck. Had they sunk more money into it, and made the film less about Faye Dunaway’s rampant ego, or about snagging some stupid power source or whatever, the film might have worked, and we’d have been blessed with more! Alas, t’was not to be, and the Salkind’s mission to drive the Superman cinematic legacy into the dirt was in full bloom by now. Given a decent budget, a better story, and less stupidity, Supergirl could have been a classic. Instead, we’re left with a flaming bag of dog turd on the porch, and everyone’s wearing boots.